Sword Art Online (SAO) might not have the best reputation, but it is popular enough that its prize figures get bootlegged, so now I have four of the SAO noodle stoppers to look at. First up on the block is Asuna.

The official I preordered on AmiAmi.

This one I got the box for, just to see what the boxes are like. I no longer have the original box, so there isn’t a direct comparison here.
Front: 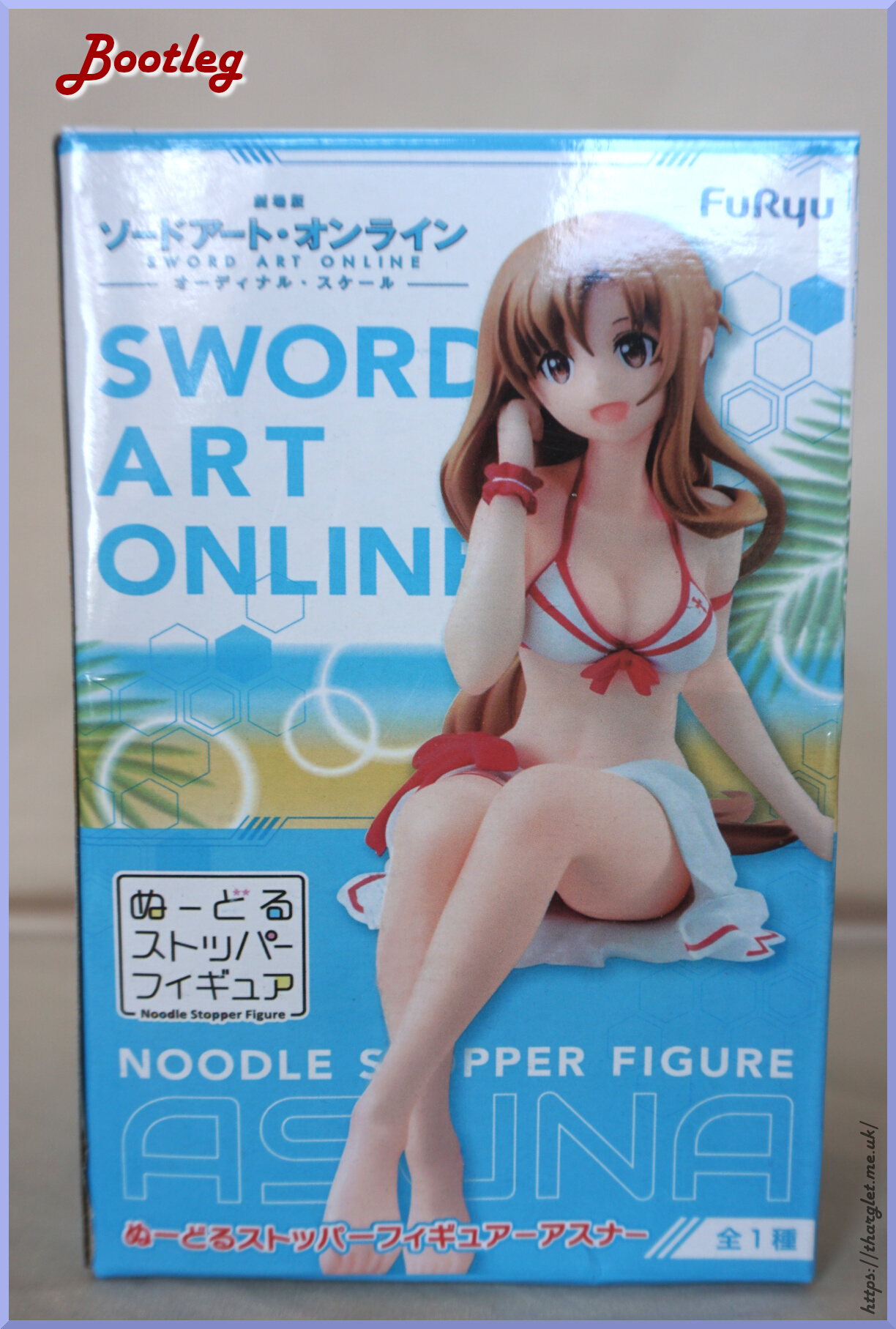 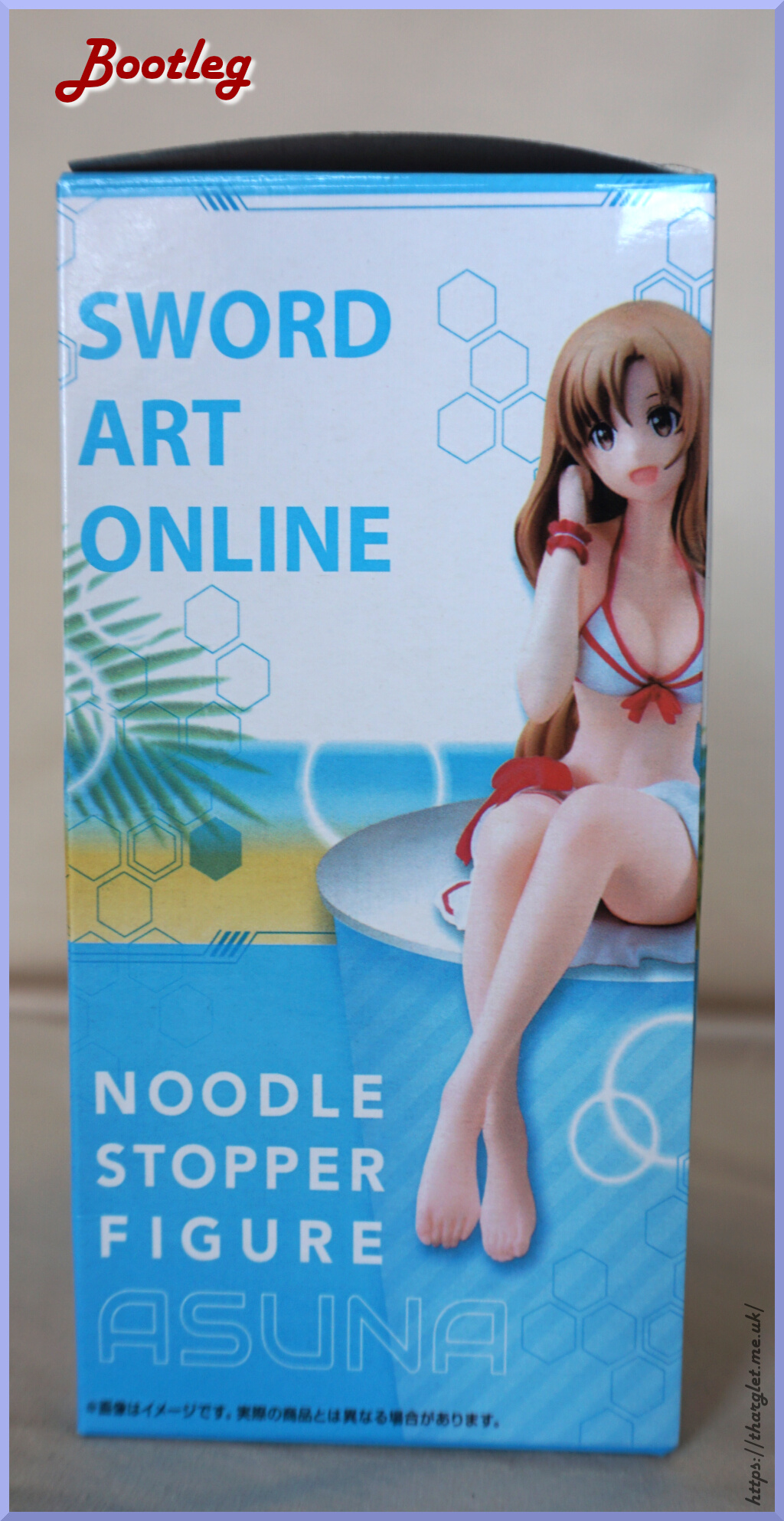 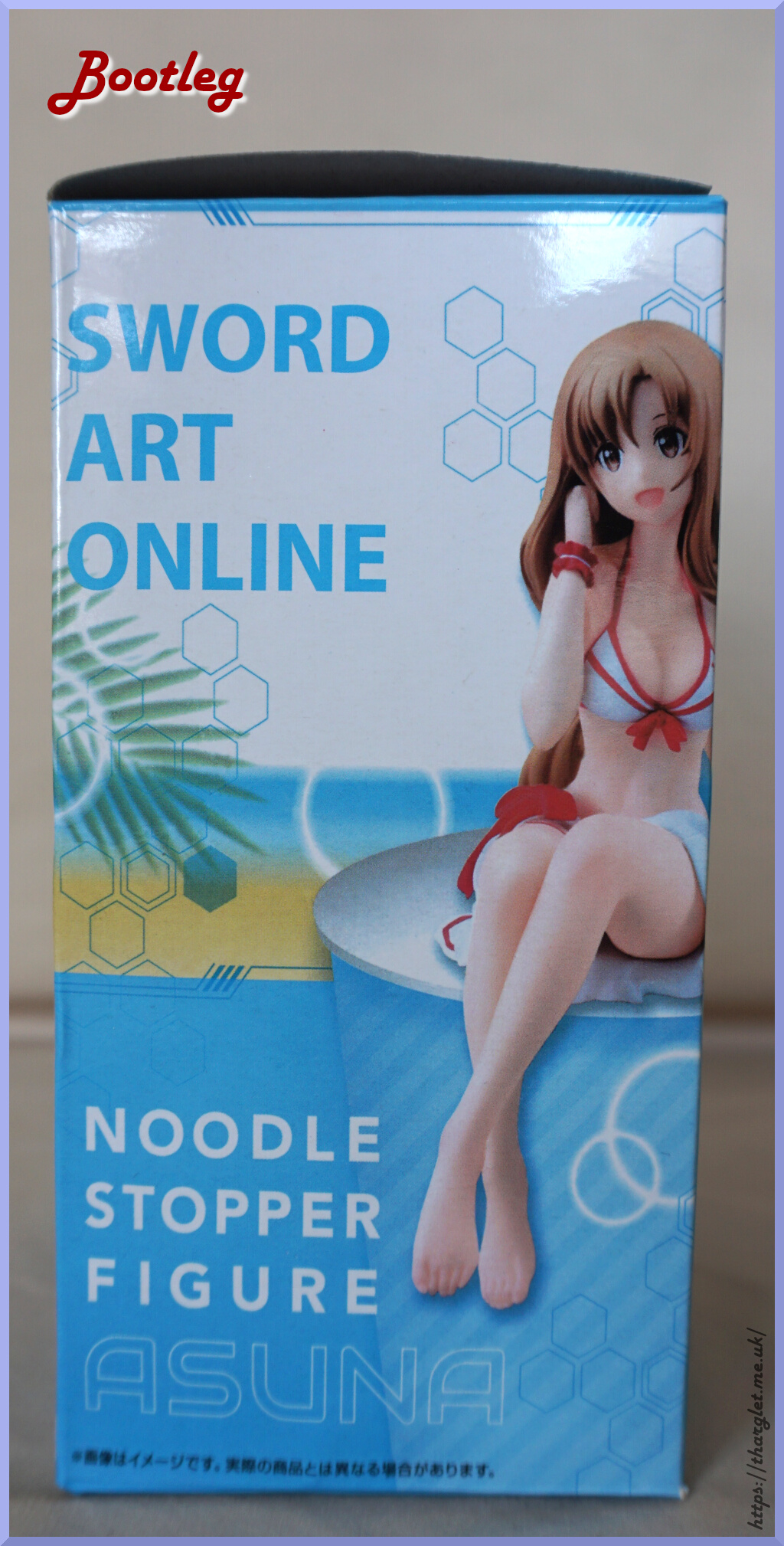 This box is thinner than the original and lacks the claw machine grab holes. The sides are also the same side duplicated – on the official one side has the copyright mentioning Kadokawa and SAO.
We can also see the print quality isn’t great and Asuna is a bit bluey and fuzzy. 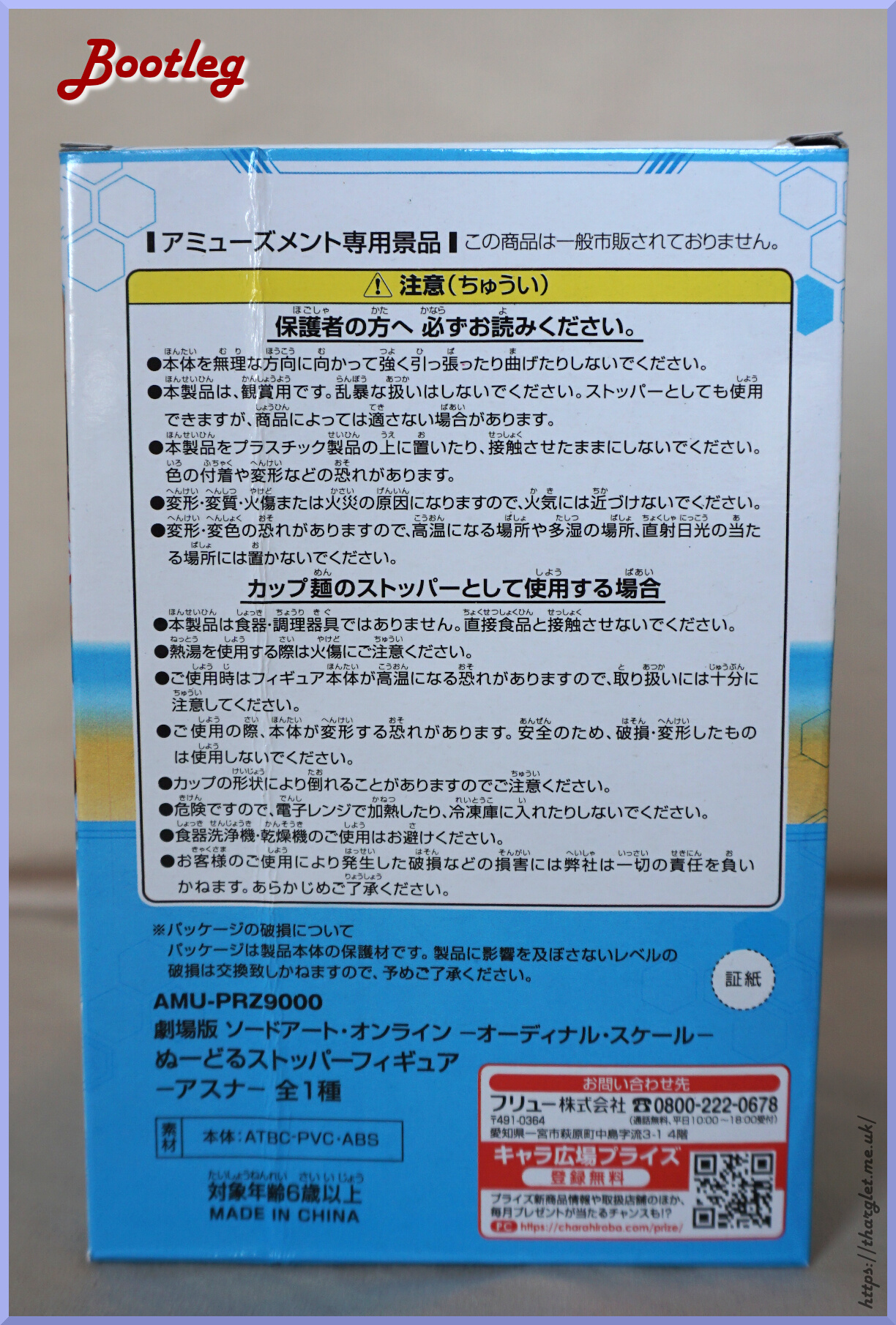 This is a mildly inferior copy of the original. Also note the dotted circle where there should be an authenticity sticker. 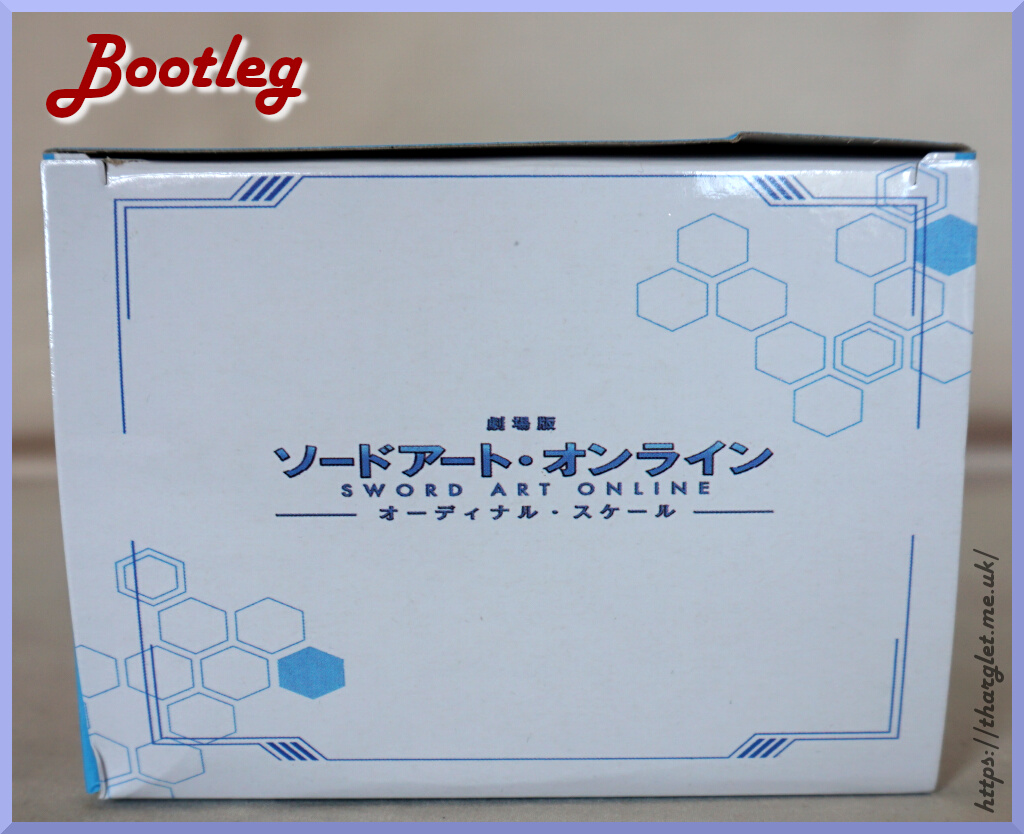 The top image has been squished to fit the non-square top, leaving the text looking slightly stretched and jagged. 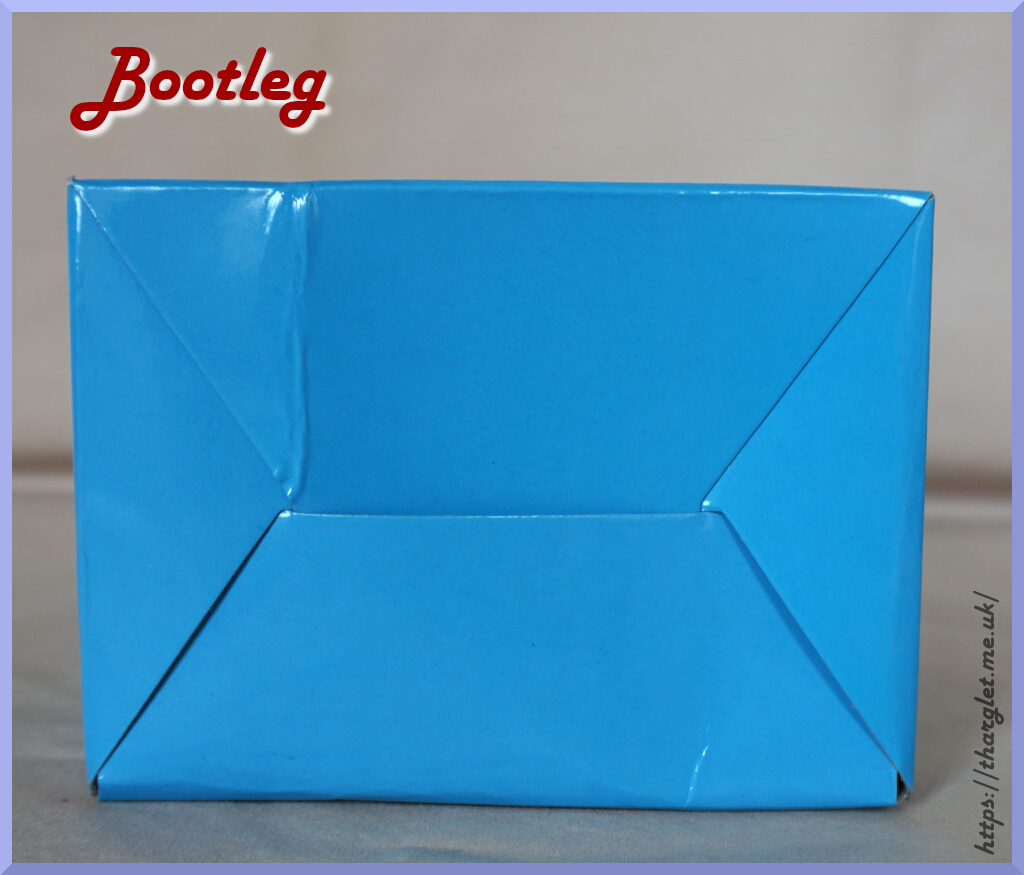 Not much to see here, but this does show one of the fold lines you do tend to get when a box has been flattened – if you’re buying something “new” that has similar fold lines, be suspicious of its authenticity. 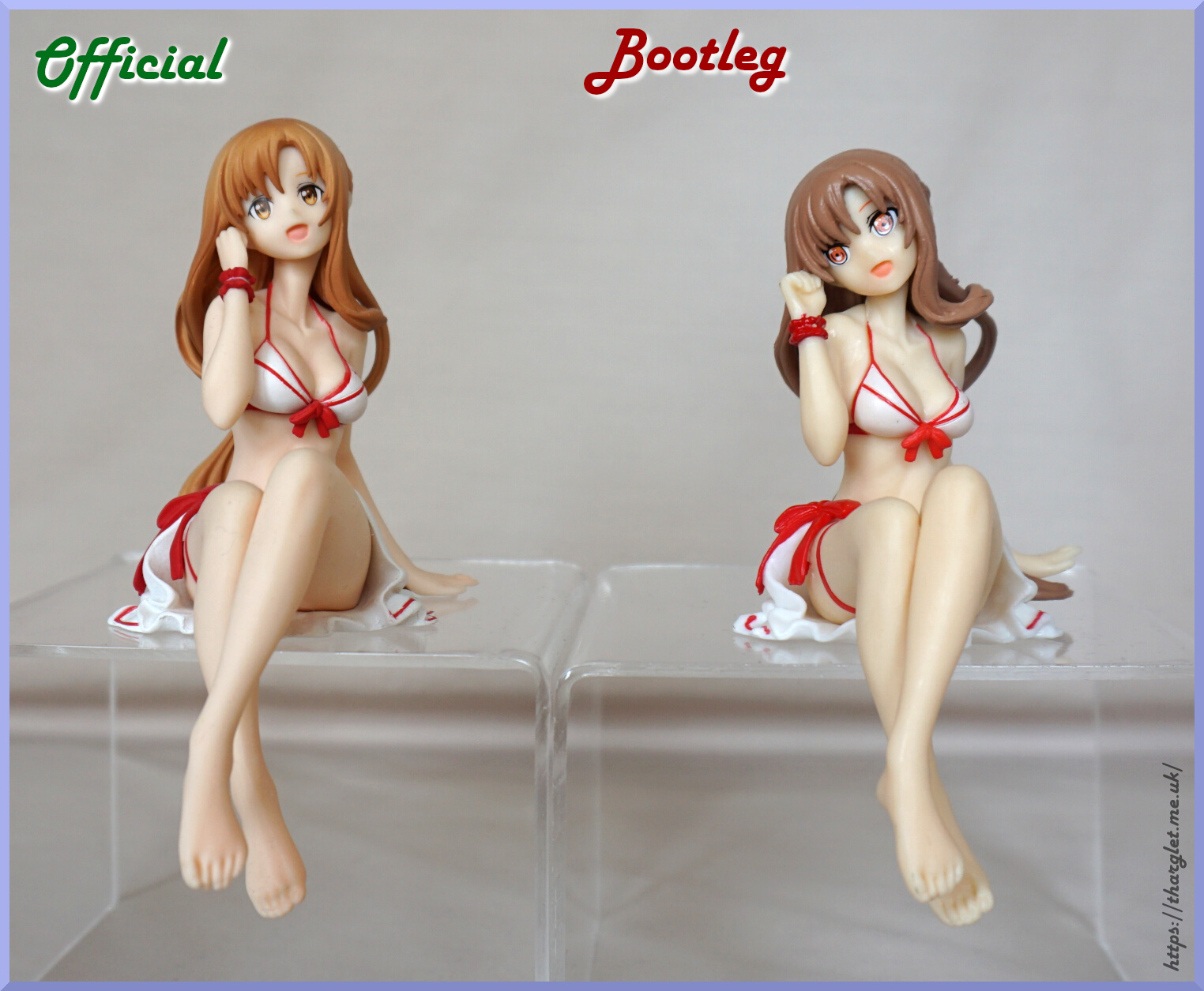 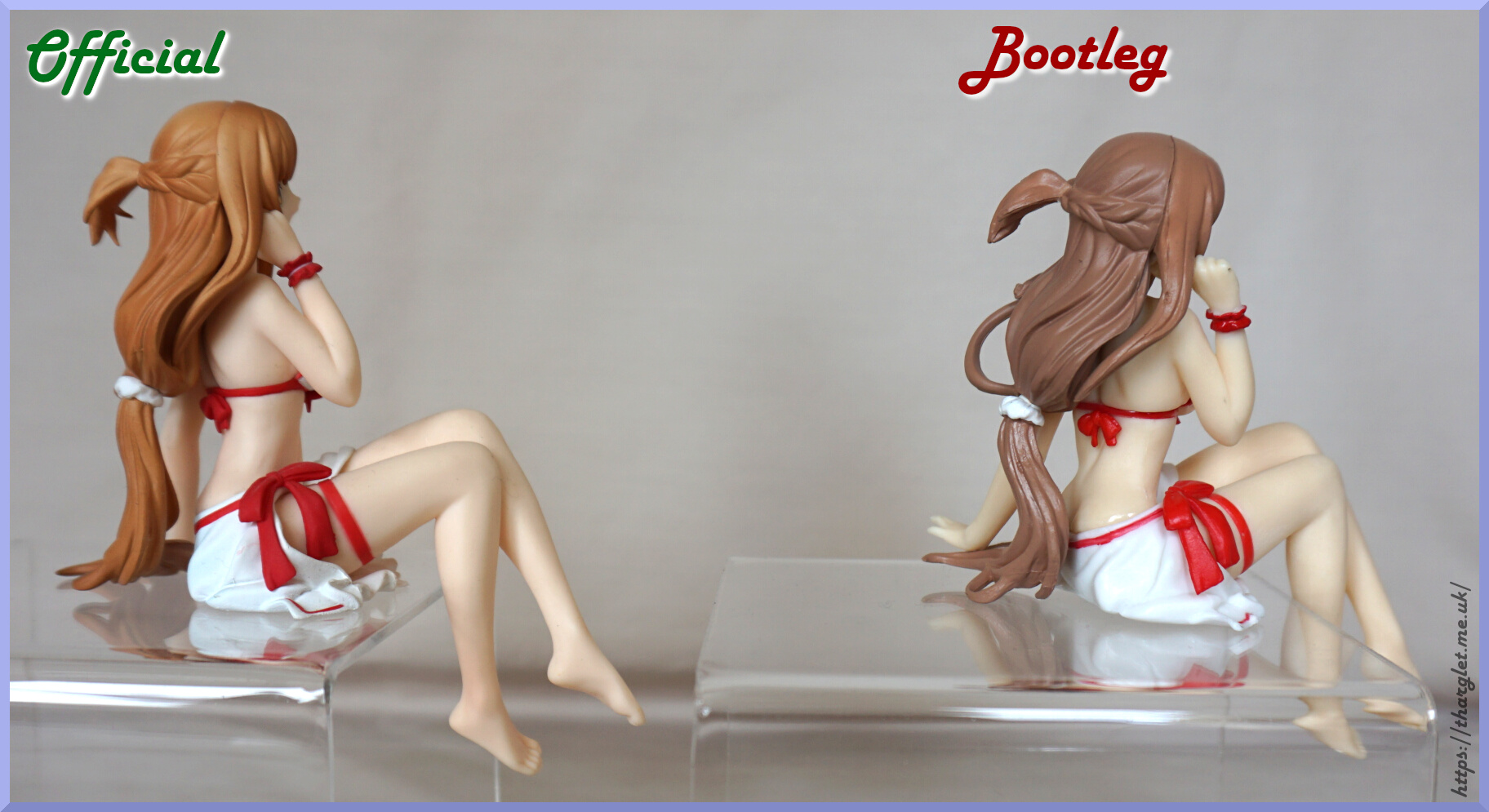 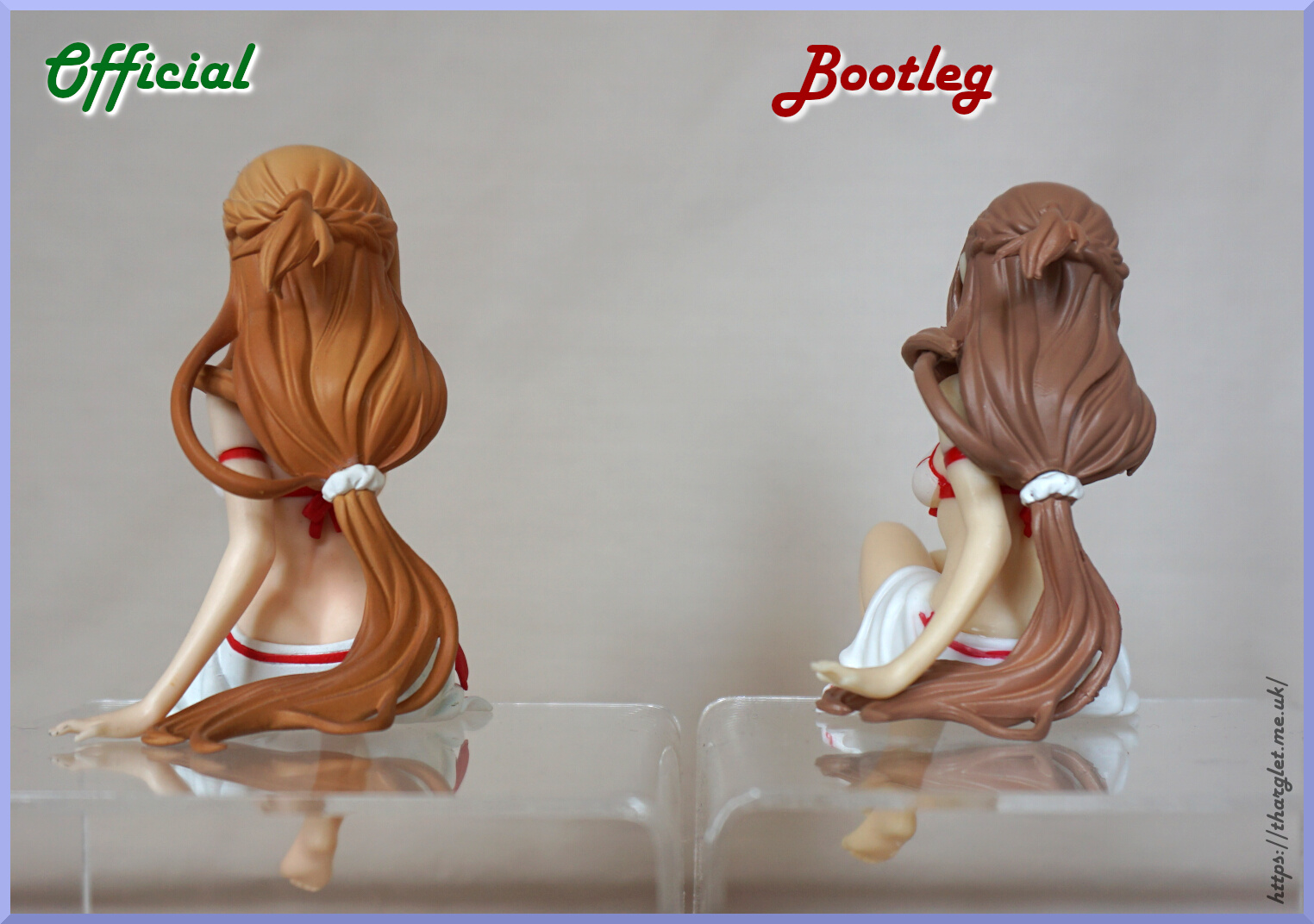 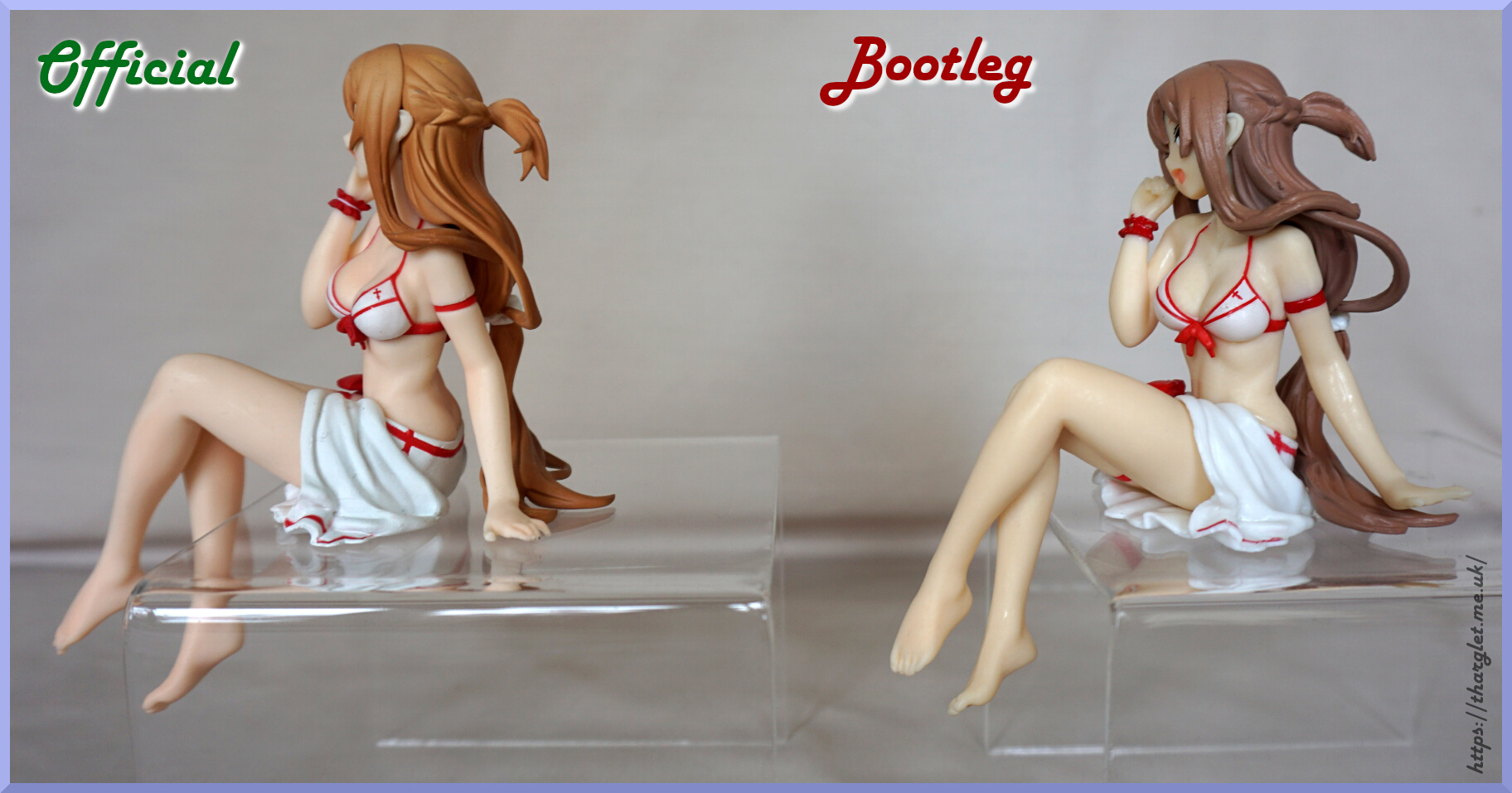 Huh, I thought Asuna had orangey hair? Bootleg Asuna says no! Surprised by how off the hair colour is on the bootleg.

Bootleg: stare, stare
The hair and eye colours are massively off on the bootleg – not being very character-accurate here. The official’s hair is the orangey-brown it should be and the bootleg I think had chocolate melted over its head. Just… so bad. The bootleg’s hair is also blobby in shape and the sculpt is ill-defined.
The official’s eyebrows match her hair, the bootleg’s is some other shade of orange that matches the bootleg’s eyes instead of her hair. Quite odd.
Getting to the eyes, the bootleg’s aren’t just lacking a lot of detail but are incorrectly coloured and shaped. I don’t think they were thinking when they chose the eye decals.
The bootleg’s mouth is probably the most inoffensive part and looks OK, though its colour doesn’t match.
Lastly, the bootleg has pasty, shiny skin making her look potentially slightly ill. Glad the official isn’t like this. 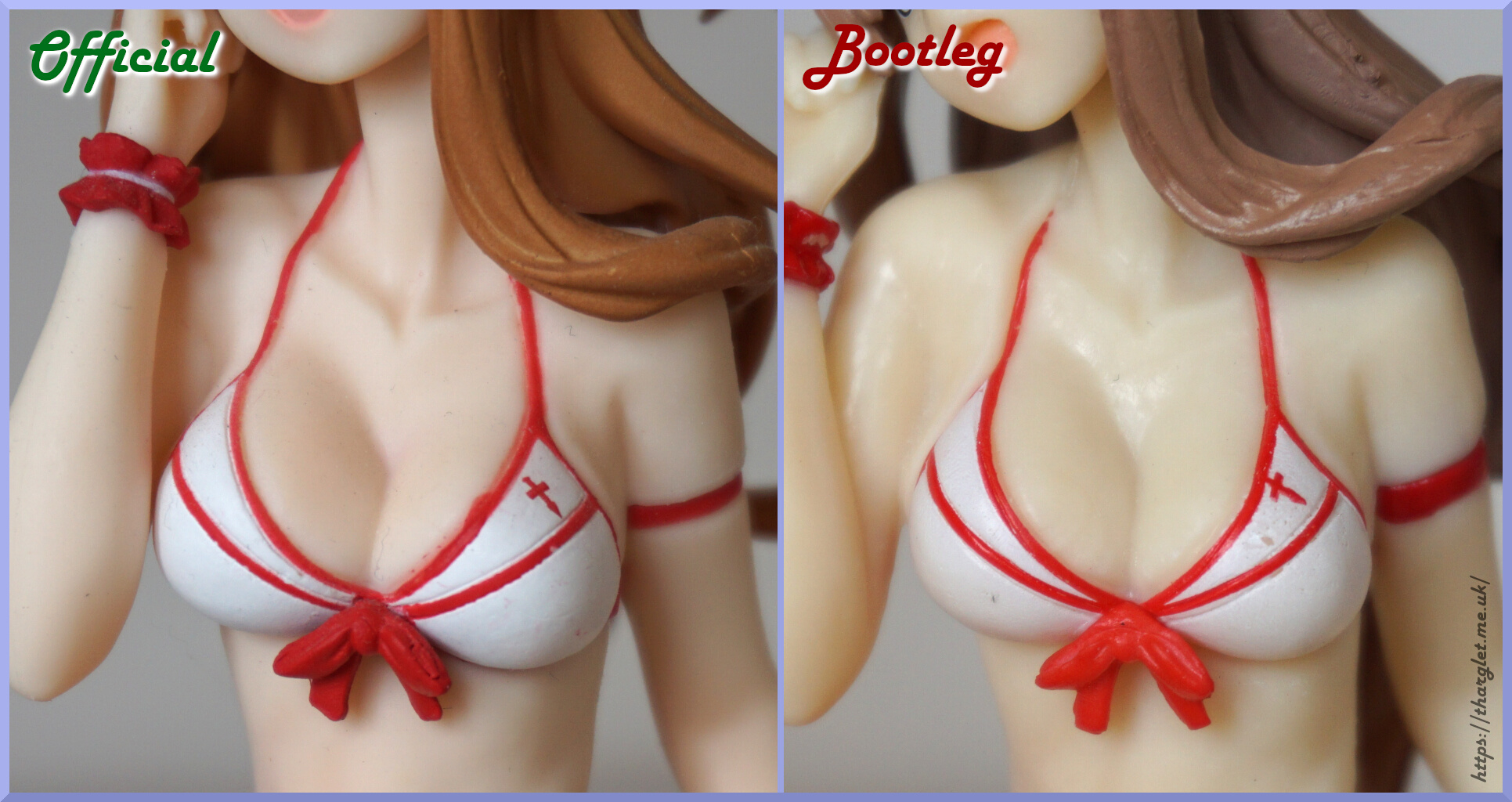 Poor bootleg Asuna is losing her top! The paint for her straps doesn’t even go all the way to the
top of her neck.
Here the shiny, pasty skin of the bootleg is on full show and not making her look great. The official is a much better skin tone. The loss of detail in the bootleg cast really doesn’t help her skin’s appearance.
The paint on the official’s top is on a par with most prize figures, the bootleg’s is almost neater, but completely missed the line on her left boob. The bow on the bootleg appears to be red plastic rather than painted, which gives it a cheap feel.

Side of her hair: 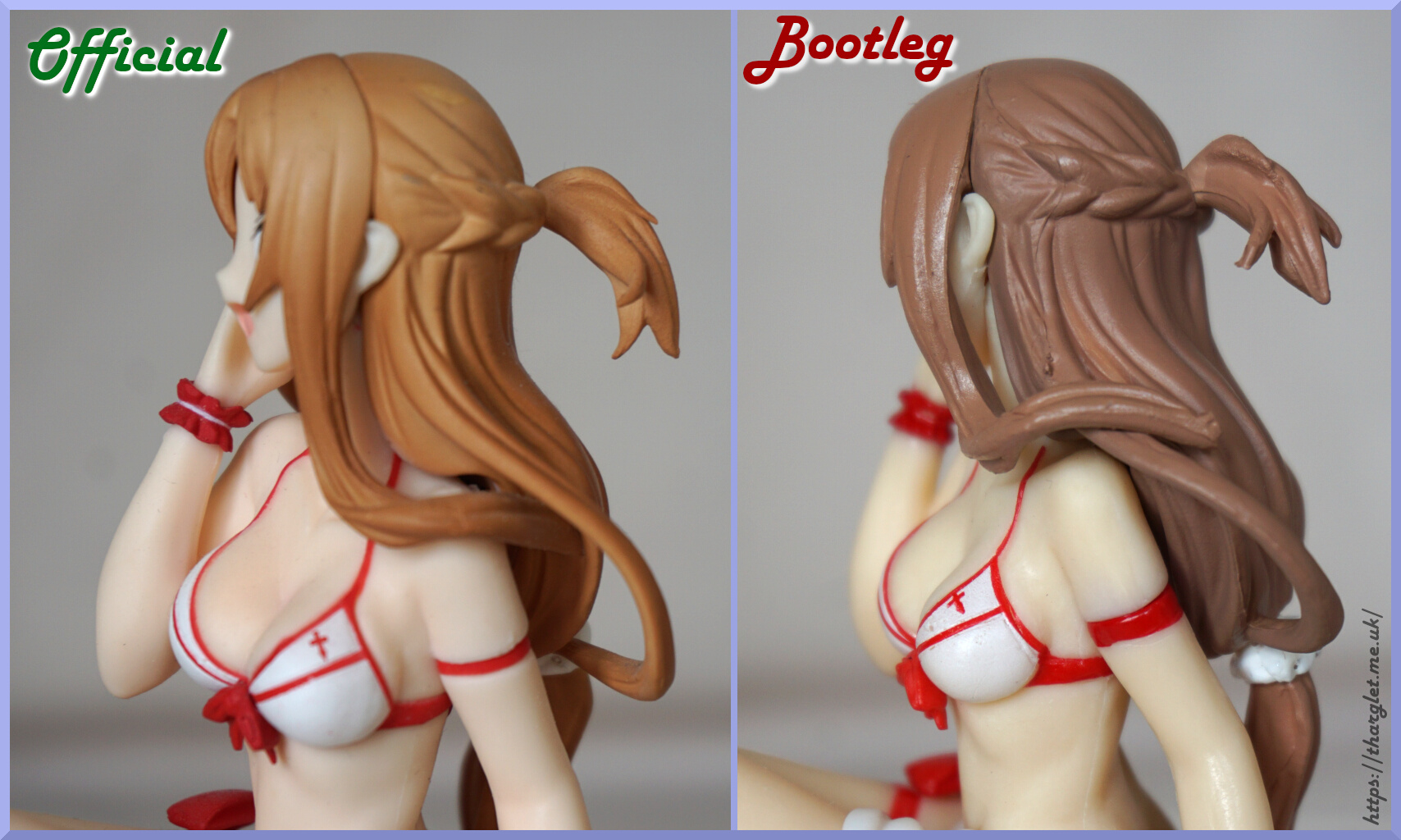 Yuck, don’t think I’m going to get over the bootleg’s awful brown hair.
With the official, we can see the way her hair was laid in sections dangling over her shoulder. This part passed the bootleggers by, and hers is piled up incorrectly, leaving it floating unnaturally in the air.
Moving to her arm strap, the official’s does look too tight for my liking, but the bootleg’s is thick, uneven and looks incorrectly assembled towards the back. Here we can see how the bootleg’s hand is misaligned – maybe they thought she was supposed to be waving? The shiny skin makes her hand almost look like a gelatinous blob to me.
Going to the band around her wrist, the bootleg’s has lost all detail and is a painted mess. Much prefer the original one.

The mould mostly matches on the bootleg, but is somewhat sadder. The hair on the bootleg hasn’t been attached properly from the upper hair to the scrunchie leaving it looking even odder.
Due to the poor construction and deformed moulding the bootleg’s hand now sits atop her hair instead of on the ground level where it should be. Slightly better than hanging freely I suppose.

Whilst we’re on the subject of her left hand, here is a close-up of it. Not sure if the dirt on the official hand is my fault or not. Her left hand does look odd from certain angles on the official, and the bootleg has the same curse. Plus the added one where they had to have some floaty, and her palm isn’t even level with the surface. Her wrist manages to look even more bizarre.

Again, we have the colour mismatch between the official and the bootleg. The bootleg’s bow looks kind of sad and melty instead of lying flat due to gravity.
The leg bands on both look OK to me, just different.

Left side of skirt: 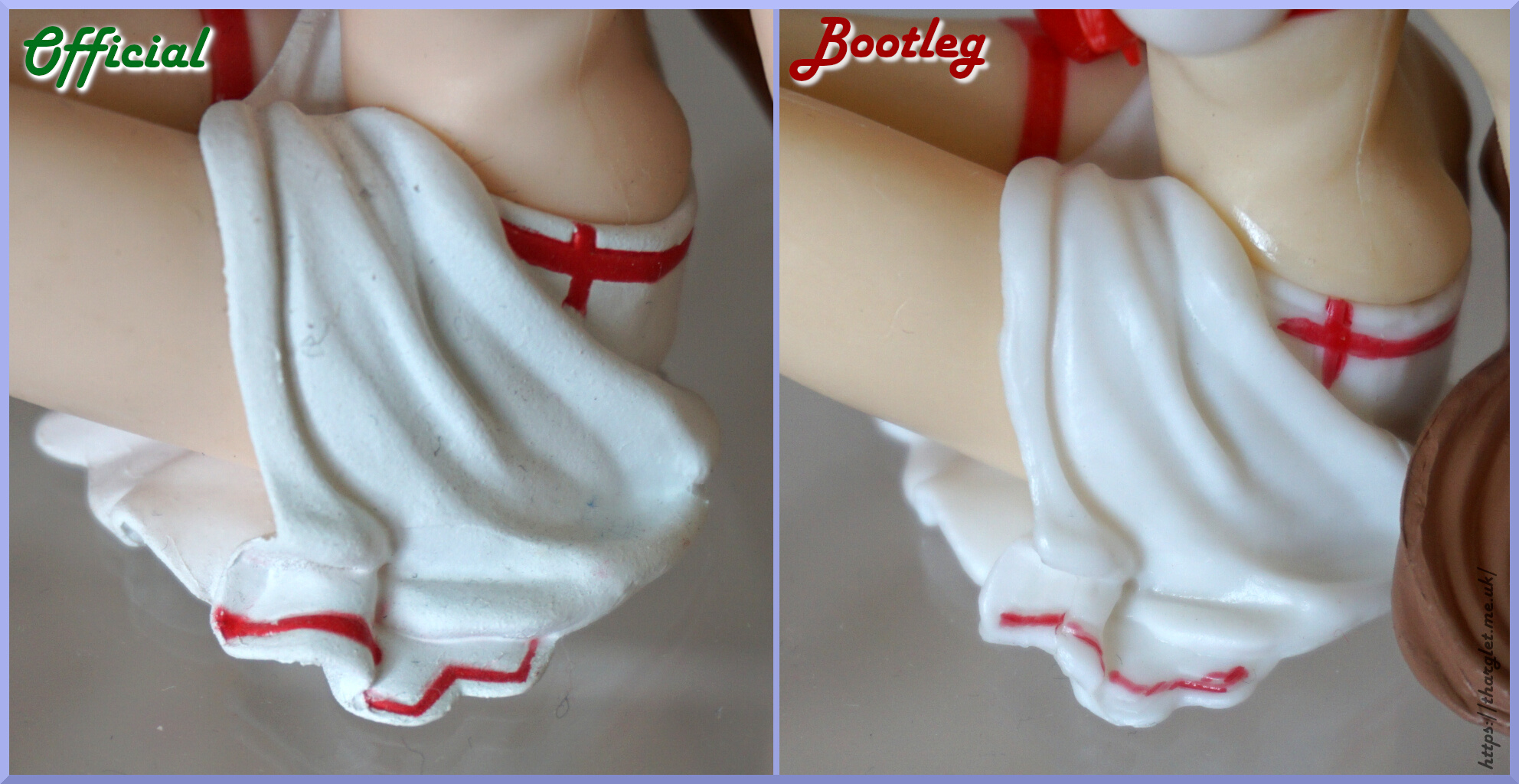 Here we get to see the true horror of the bootleg paint. And the fact I don’t dust my figures as nearly as often as I should.
These lines are slightly ambitious for a prize figure, so they have come out a little sloppy on the official. The bootleg manages to take this to the next level though, and the skirt line is barely there and the cross painting is definitely sloppy and thin.
Going to the plastic of the skirt, the official has been painted in white giving a more matte finish, and the official has been left plasticky which doesn’t look good in my opinion. 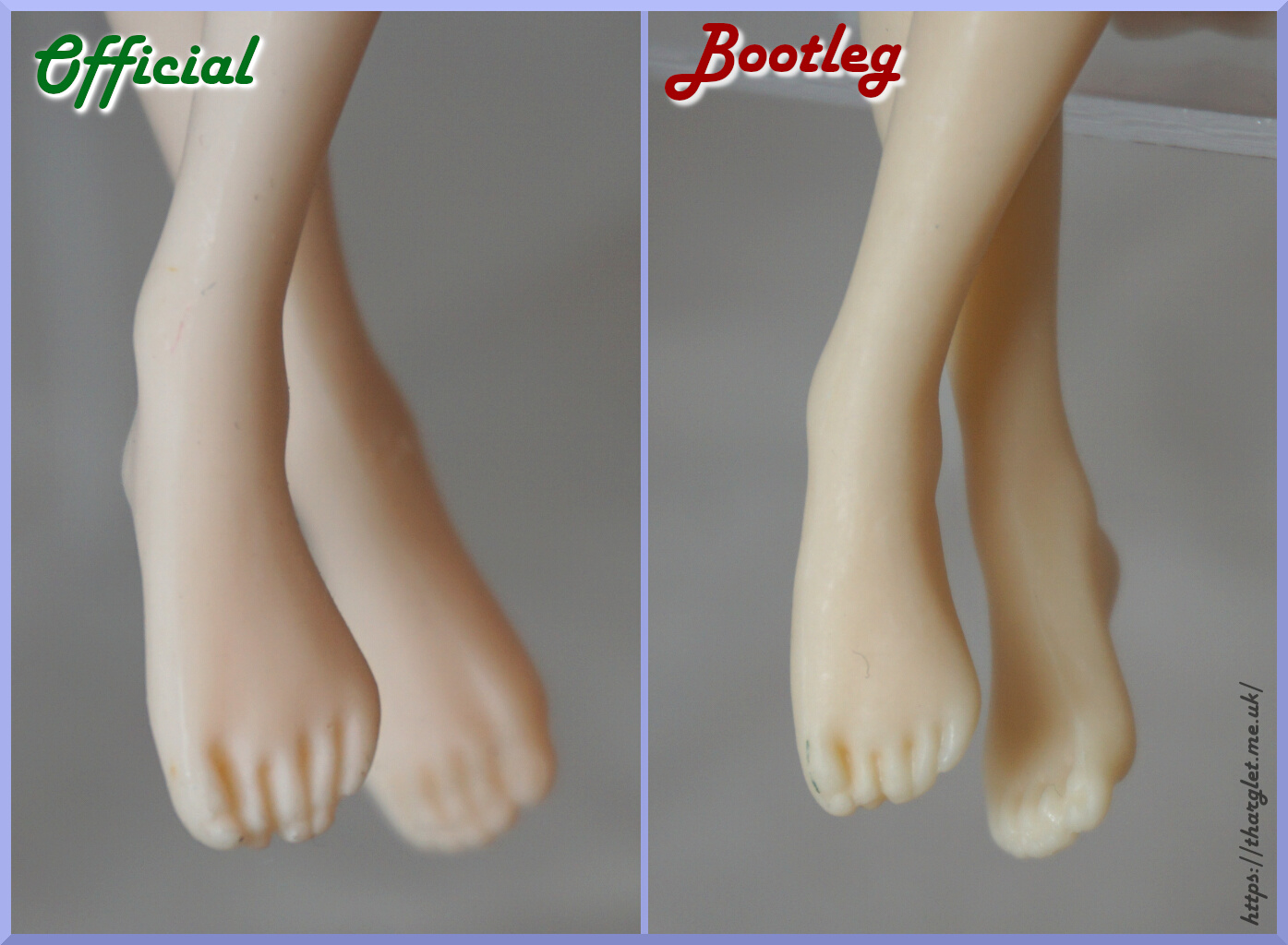 Ah, this time the bootleg can have the dirty mark. And seeing as I opened the bootleg for the review I can categorically say this is Chinese dirt.
The foot moulding doesn’t suffer as badly as some other parts, but we can see her toes have become shorter. The bootleg’s feet are also closer together, giving her a different pose. 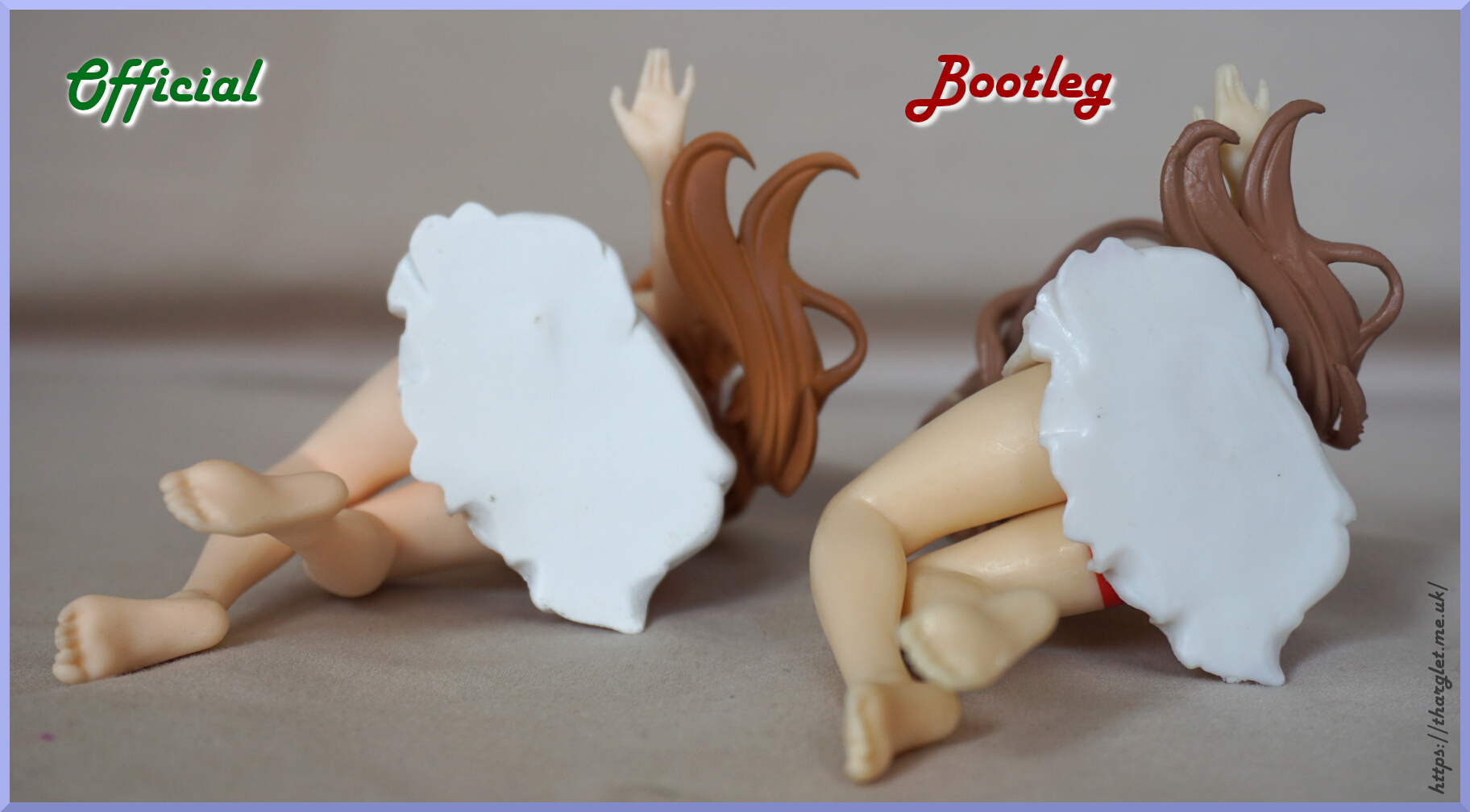 Here we can see they’re both flat on the bottom. Useful for the shelf-sitting :). Here we can also see how different the leg and hair positions are, which is a theme running throughout the bootleg figure.

And maybe to try and make up for the sadness that is the bootleg, it came with some equally sad-looking accessories:

First we have the thinnest rubber keychain I’ve ever seen, allegedly of Totoro – this thing feels very thin and not very nice to touch. The metal chain and ring are also very thin and could be easily broken.
Next we have a hairband that doesn’t feel very well made and has a little plastic heart that says “shen xi”. Not sure what the translation of this is. I don’t have hair long enough to use this, but even if I did I’m not sure it would last long – the fabric felt loose and would probably come apart if it was used.

The bootleg? No… just… no. I couldn’t recommend it to anyone. The hair and the awful eyes make it not look like Asuna, and I’m not sure if someone who didn’t know who Asuna was would particularly want this pasty, sweaty-looking mess. The box could likely fool some people, but I think once they pulled this brown-haired, light-orange-eyed stranger wearing Asuna’s bathing costume out of the box they’d be mighty confused.