Today is another noodle stopper – Leafa from Sword Art Online.

Let’s get this blog started with the spin-around: 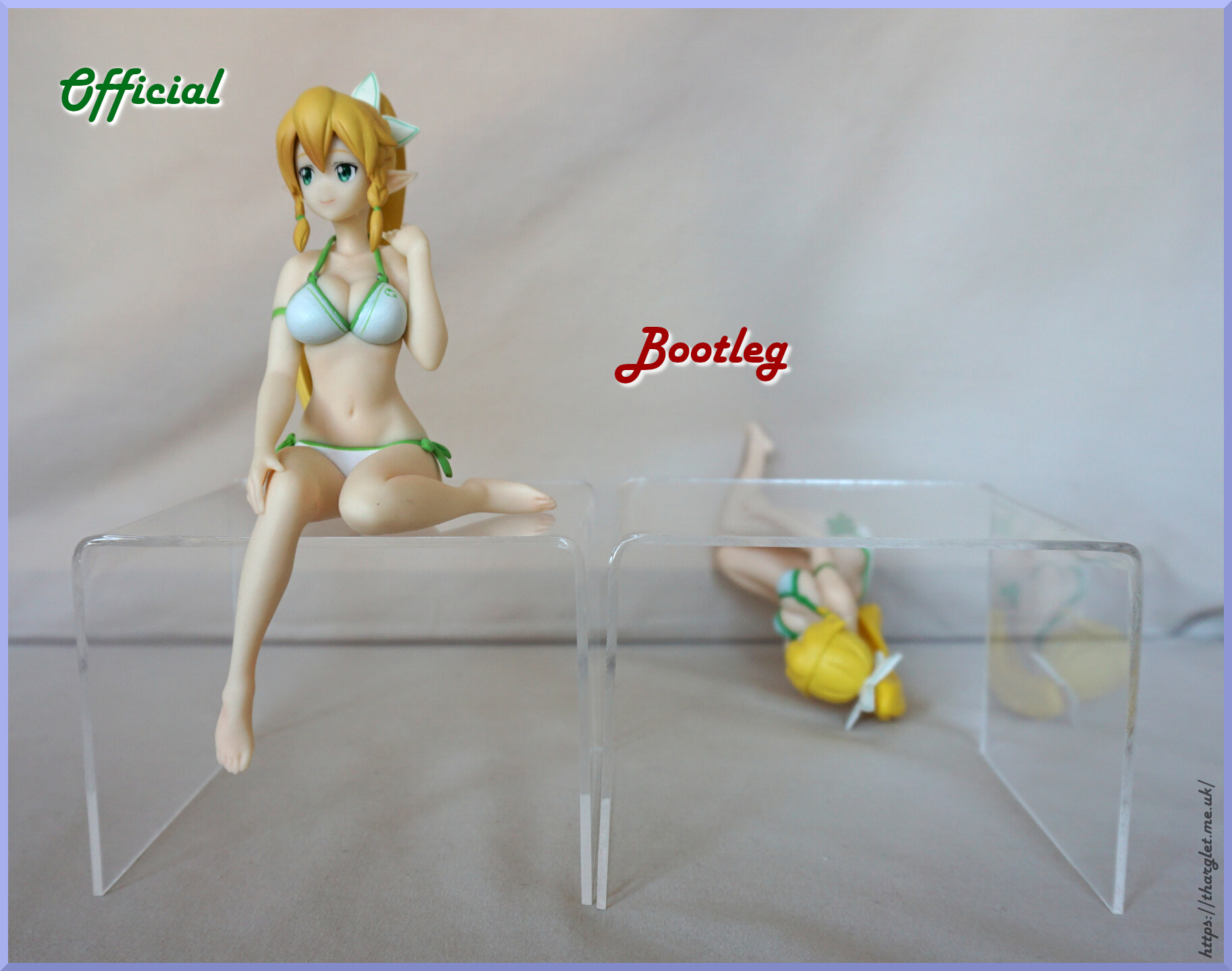 Erm, time for some white tack and to start this again… The first fail of the bootleg – it won’t actually act like a noodle stopper as the weighting on her is so uneven she’ll just fall off what she’s perched on.
White tack sourced and applied… 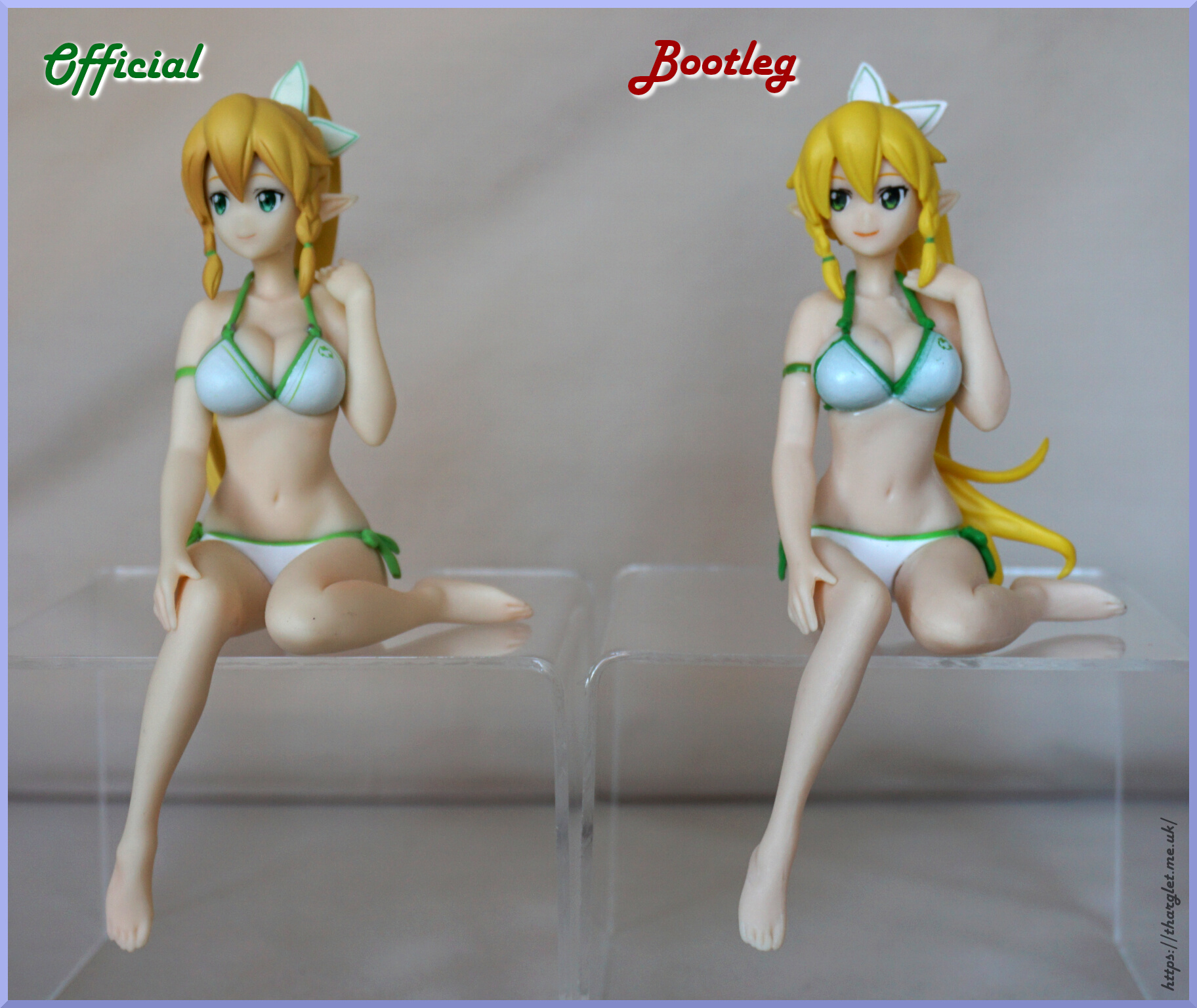 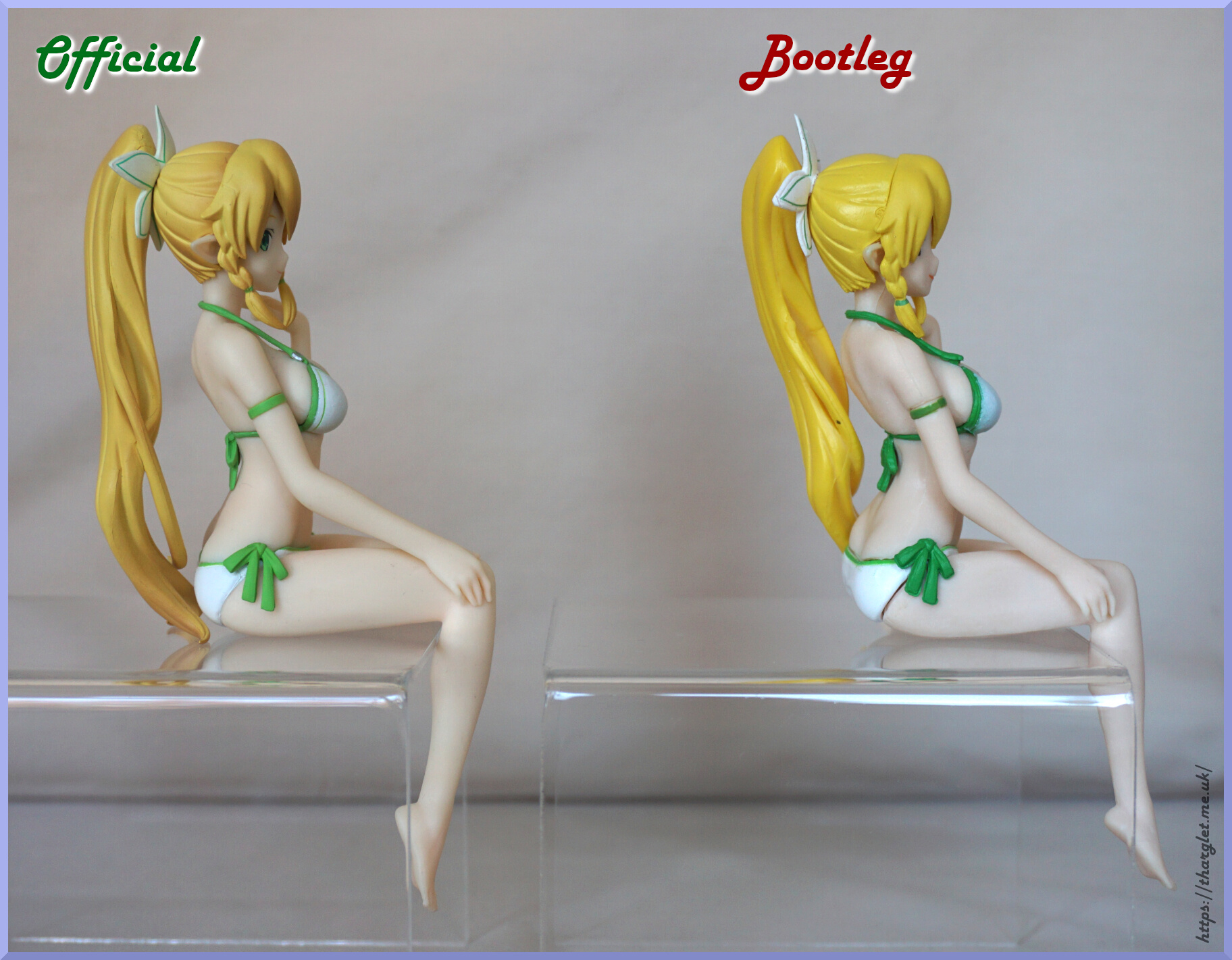 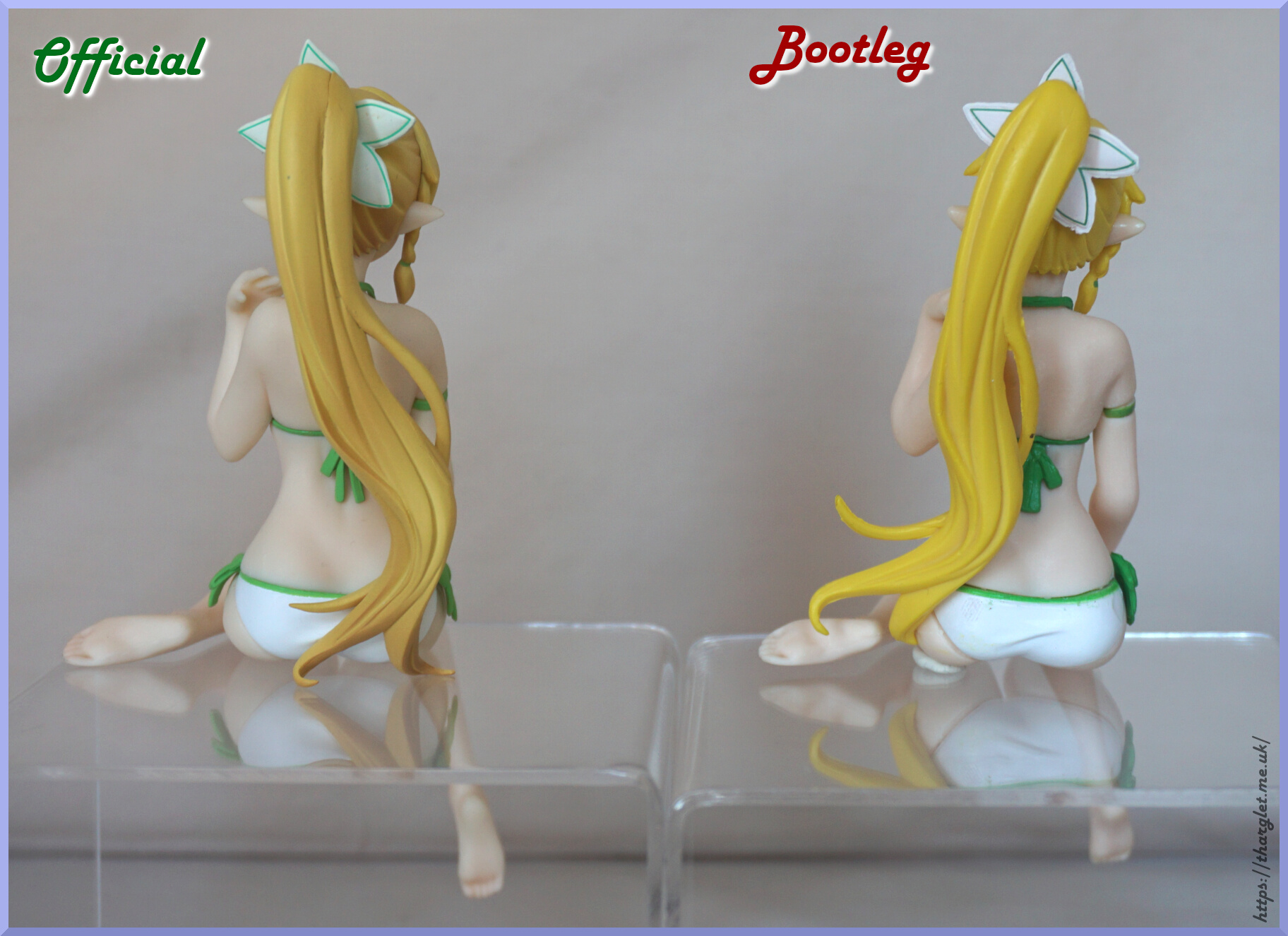 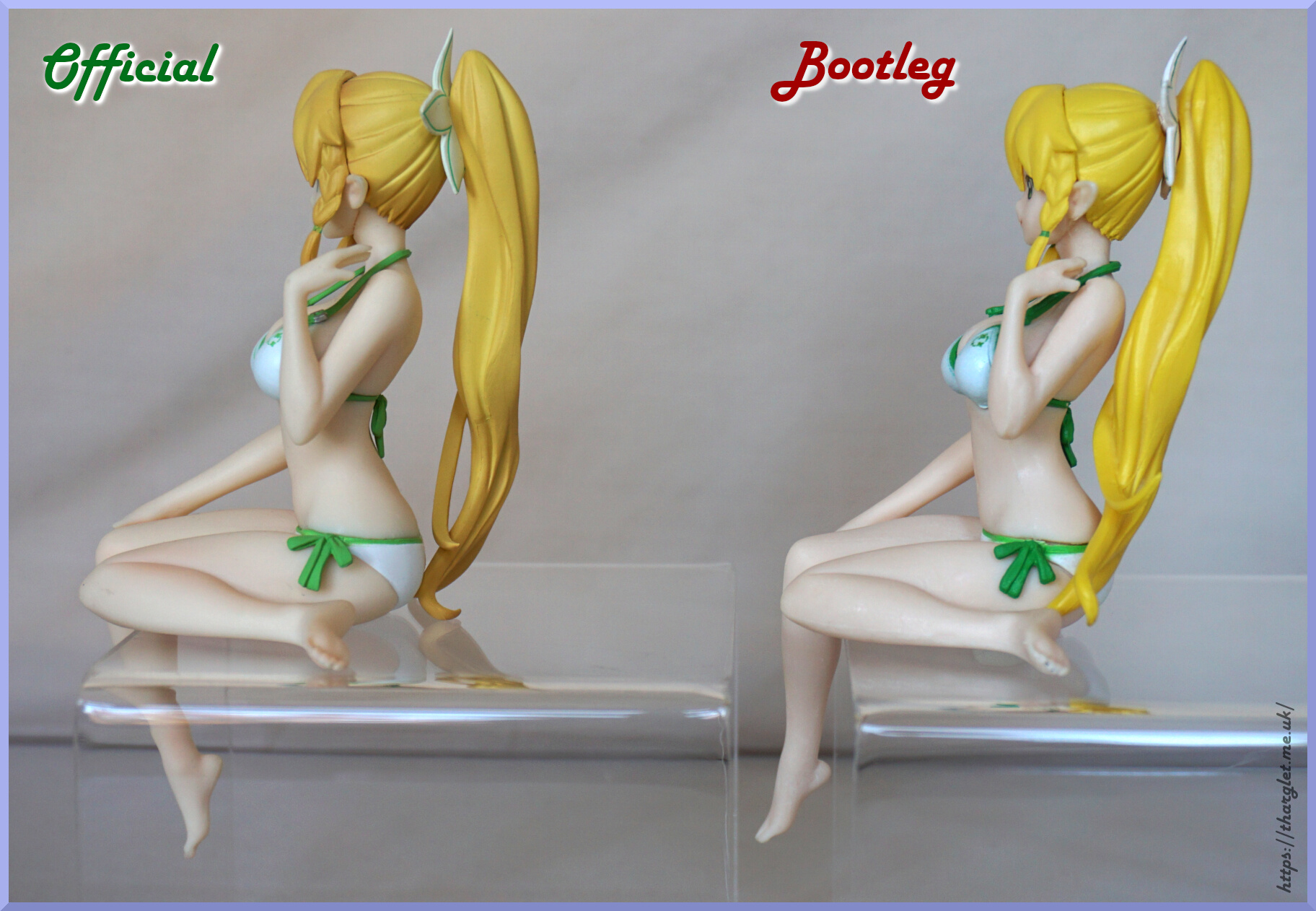 Yeah, the finish on the bootleg is looking rough – poor paint, gaps and that brightly yellow hair. Oh, and the unsightly white tack I’ve had to use to keep her on the stand. 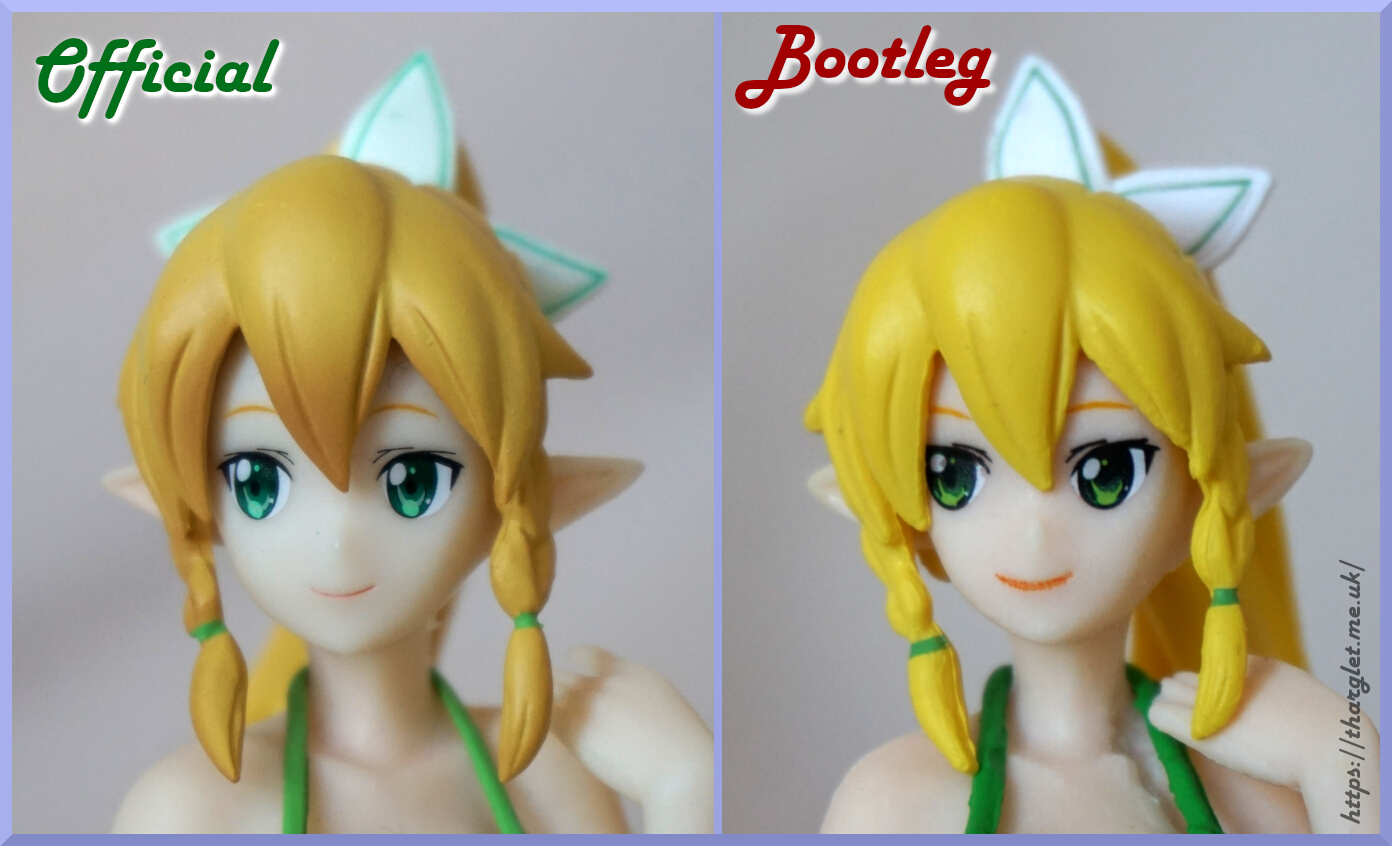 The eye decals are almost competent on the bootleg – the various bits seem to be all present, albeit in the wrong colour and slightly squashed, plus the lines above her eyes are too thick. The too-thick lines also follow through to her eyebrows and mouth – the eyebrows look OK, but the mouth is somewhat scary at this distance, with the mottled paint.
The bootleg’s hair is a blobby, seamy mess, so nothing unusual for a bootleg here. The hair also entirely lacks shading, whereas the official has darker tones towards the ends of her hair.
I don’t think her hairbands look great on either, but the bootleg’s right hairband seems to have completely missed the mark.

Both are flawed here – my official has some stray paint and the green loops are slightly off from where they should be, though I’d definitely rate the bootleg as worse here – less care has been taken to draw the green line in and the paint has got gaps in from the uneven surface. The bootleg’s moulding is also blobby, misshapen and rough.

Left side of head:

Here we can see more paint shading on the official which is lacking on the bootleg. The moulding is also poor here on the bootleg – most noticeable from where her pigtail goes underneath her fringe – the lack of paint shading and depth makes this look odd. The bootleg’s ponytail also comes with a bonus seam. 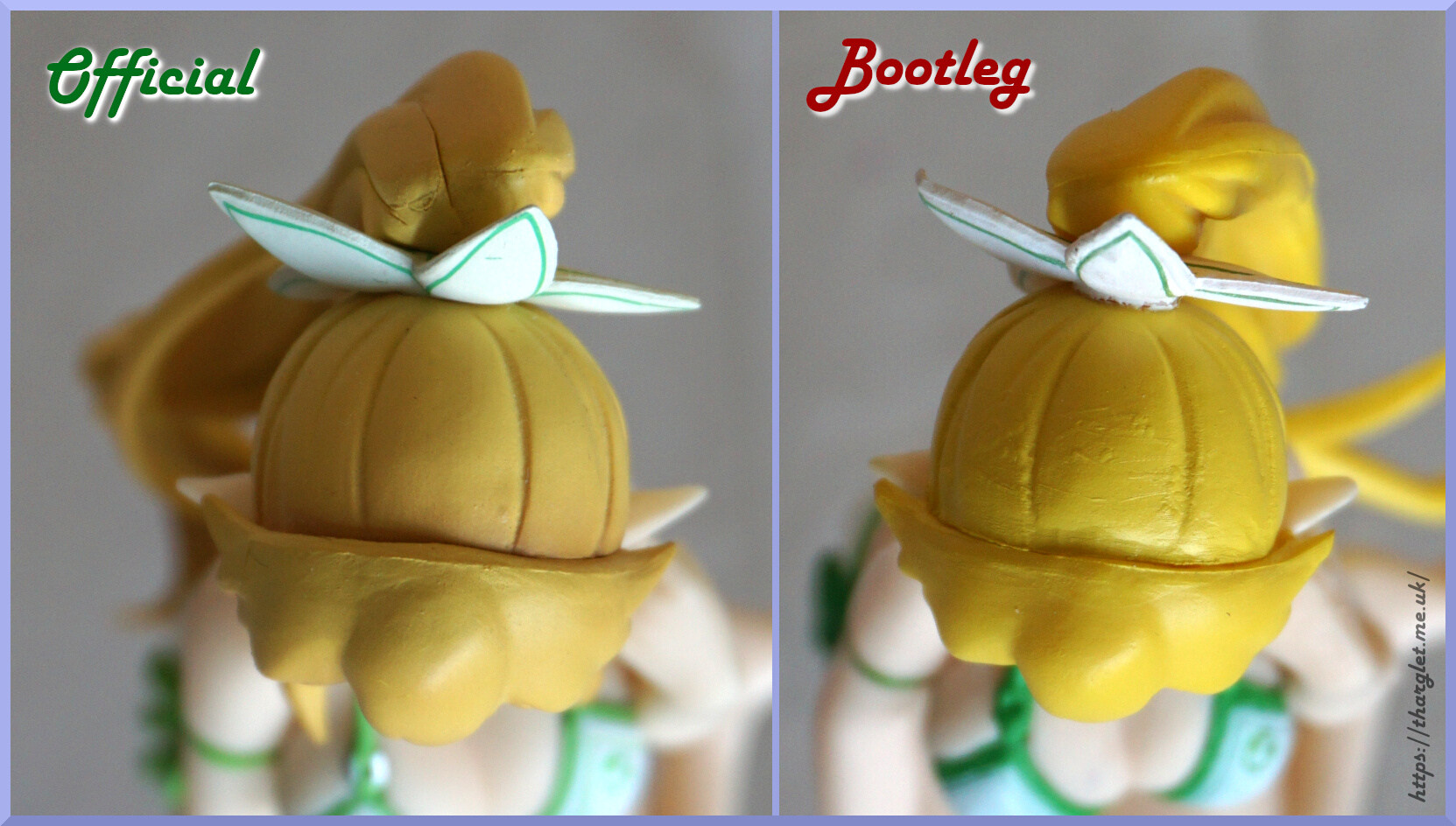 Some rough bits to be seen on both here – both have a distinctive seam as part of the fringe part. The bootleg has some very uneven paint here – lots of blobs and mess in the paint itself… and no shading.
The bootleg’s ponytail looks like it is separating too – it didn’t fall off during the review, but I won’t be surprised if it comes off at some point.

Side of her head:

Paint on the bootleg is decidedly rough here – lots of unevenness and blotches. Her hair parts haven’t been assembled correctly, leaving a larger gap above her ear than there should be.
We can also see some laziness with the green paint – the hairband doesn’t even go all the way around. 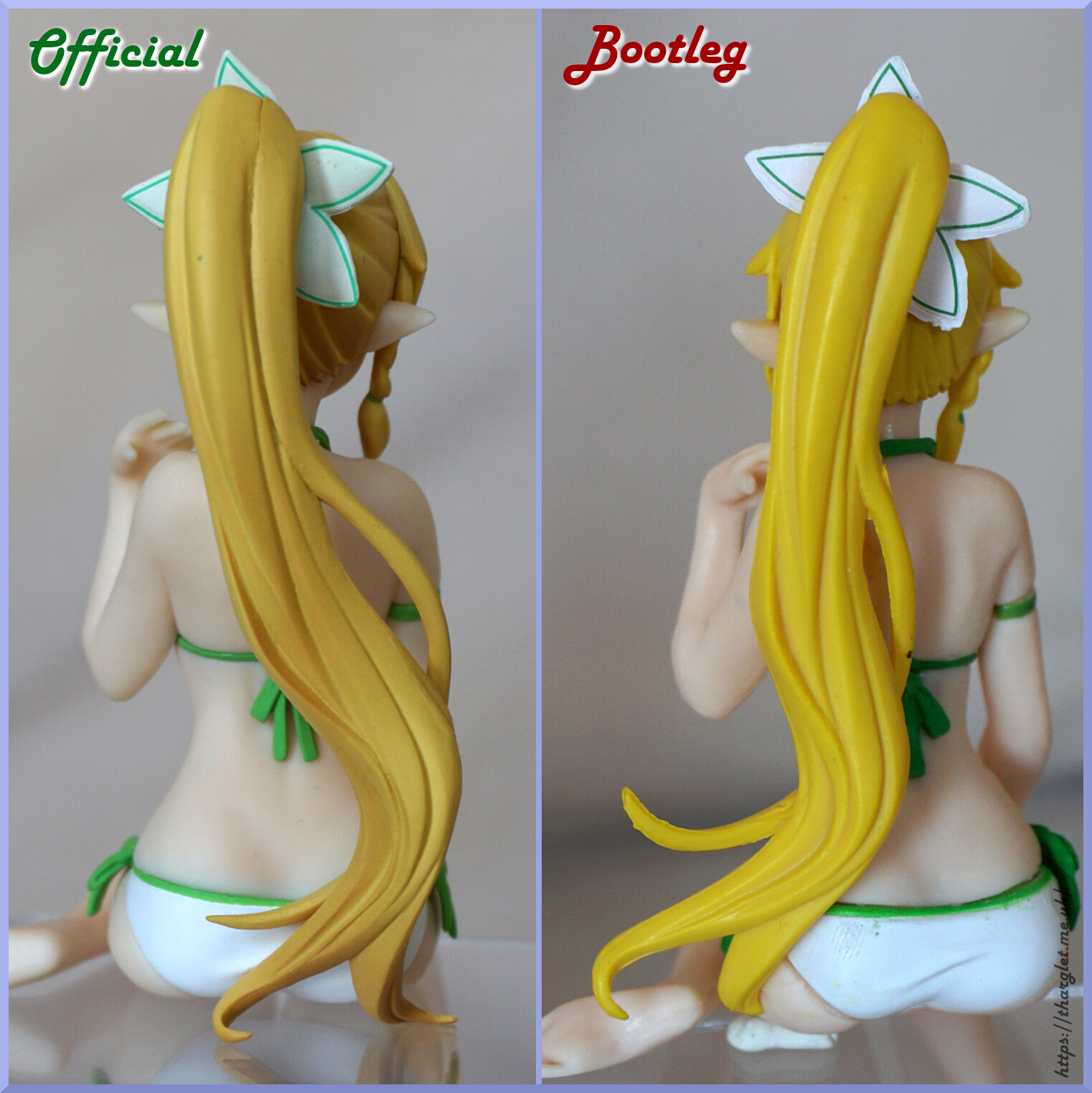 Neon, unshaded and bits of bonus plastic – yep, we’ve got most of the usual flaws in the bootleg’s hair. Her ponytail also hasn’t been attached correctly, meaning it sits to the left of her instead of over to the right. Whilst this does mean you can see more of her bum, it’s not doing us much favours due to the flaws (more on that later).
The flower band in the bootleg’s hair is also a plain white, instead of the official’s green-white, showing a cheaping out on the paint.

Let’s get a close-up of that backside: 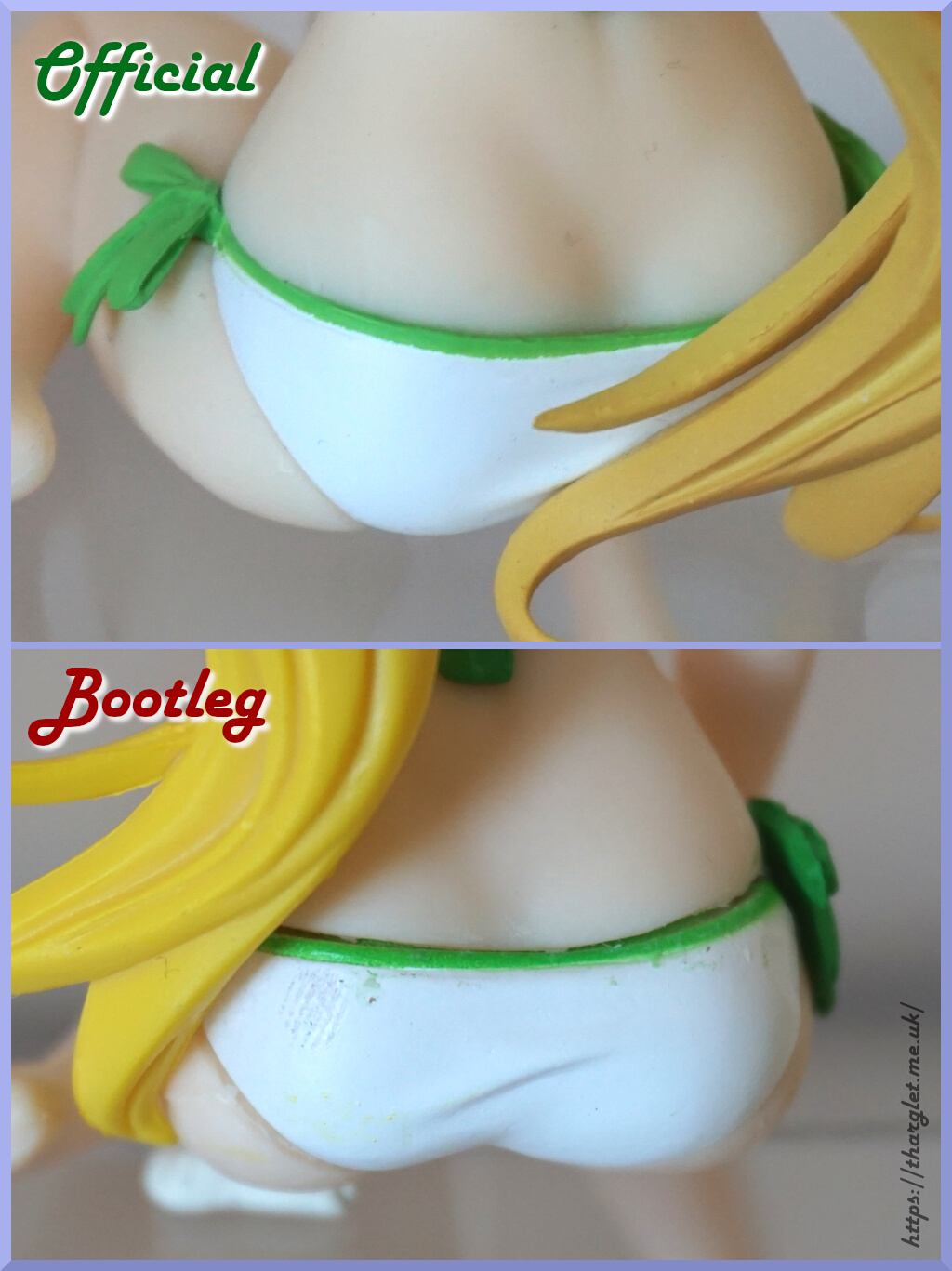 I think on the official’s sculpt they sculpted it well – you get to see the shape but nothing on show. We’ve also got some creasing in the material to make it more lifelike.
Now the bootleg, oh the bootleg. For starters, the parts aren’t assembled correctly leaving unsightly gaps by her left leg and back. The shape of her bum is slightly lost, making it less well-defined. The green paint has been roughly done and we have what looks like a fingerprint in the white paint, making it look messy. 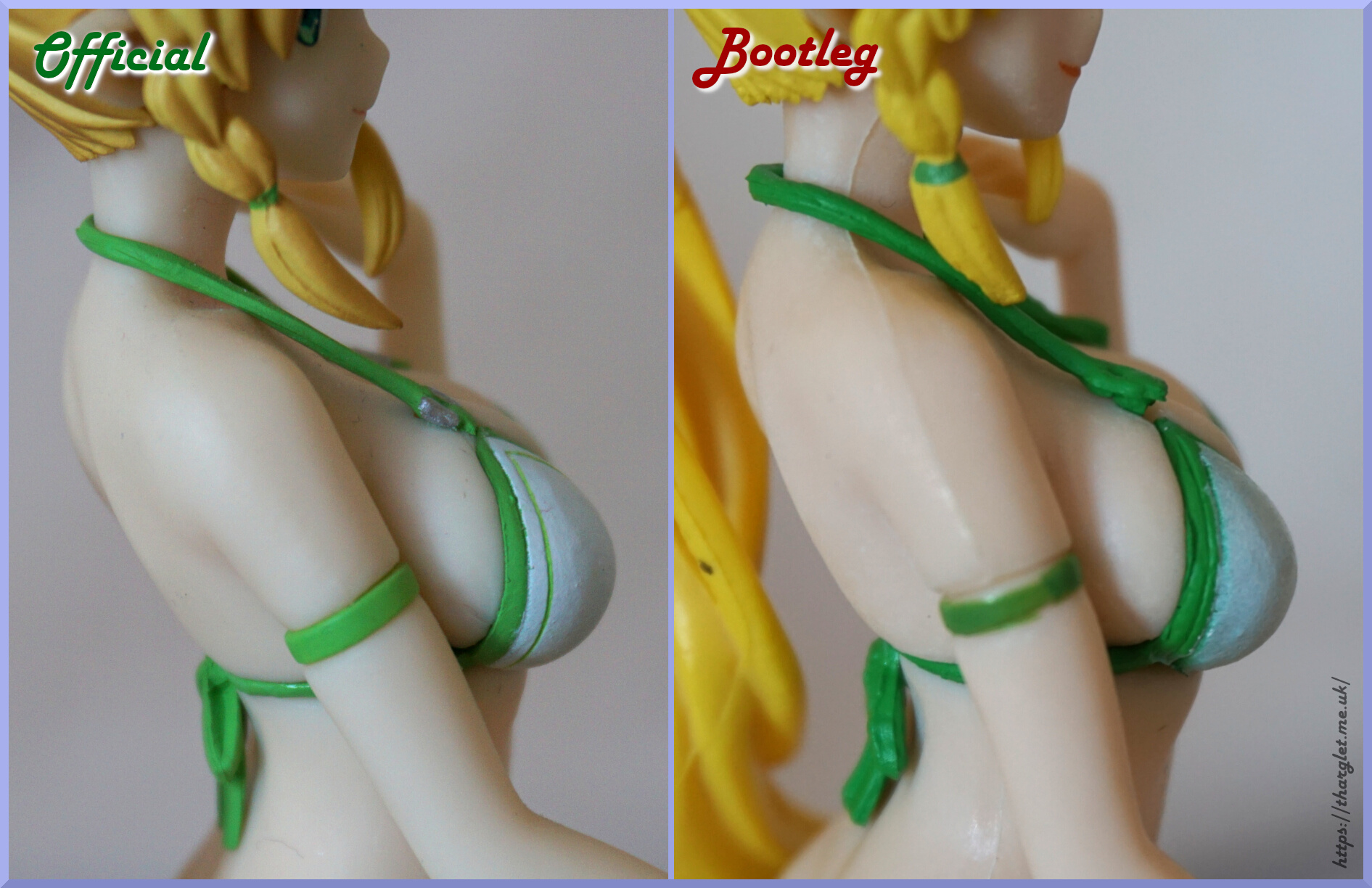 Here we have the typical armband that is used on a lot of figures to hide where an arm joins the body. On the official, it is mostly doing its job, though there is a little gapping. The bootleg on the other hand has a massive gap all the way around her arm so the join isn’t hidden at all. The paint is also too thin leaving the flesh-coloured plastic showing through. We also have an unsightly seam mark running down her neck and upper arm.
Moving to her top, the bootleg’s is very poorly assembled and the neck strap isn’t even pushed into the hole correctly, leaving it broken and revealing the unsightly assembly hole. The painting is also very poor – the strap lacks the buckle detail and the paint is very messy on the cup. We’re also missing the line detail on the cup. 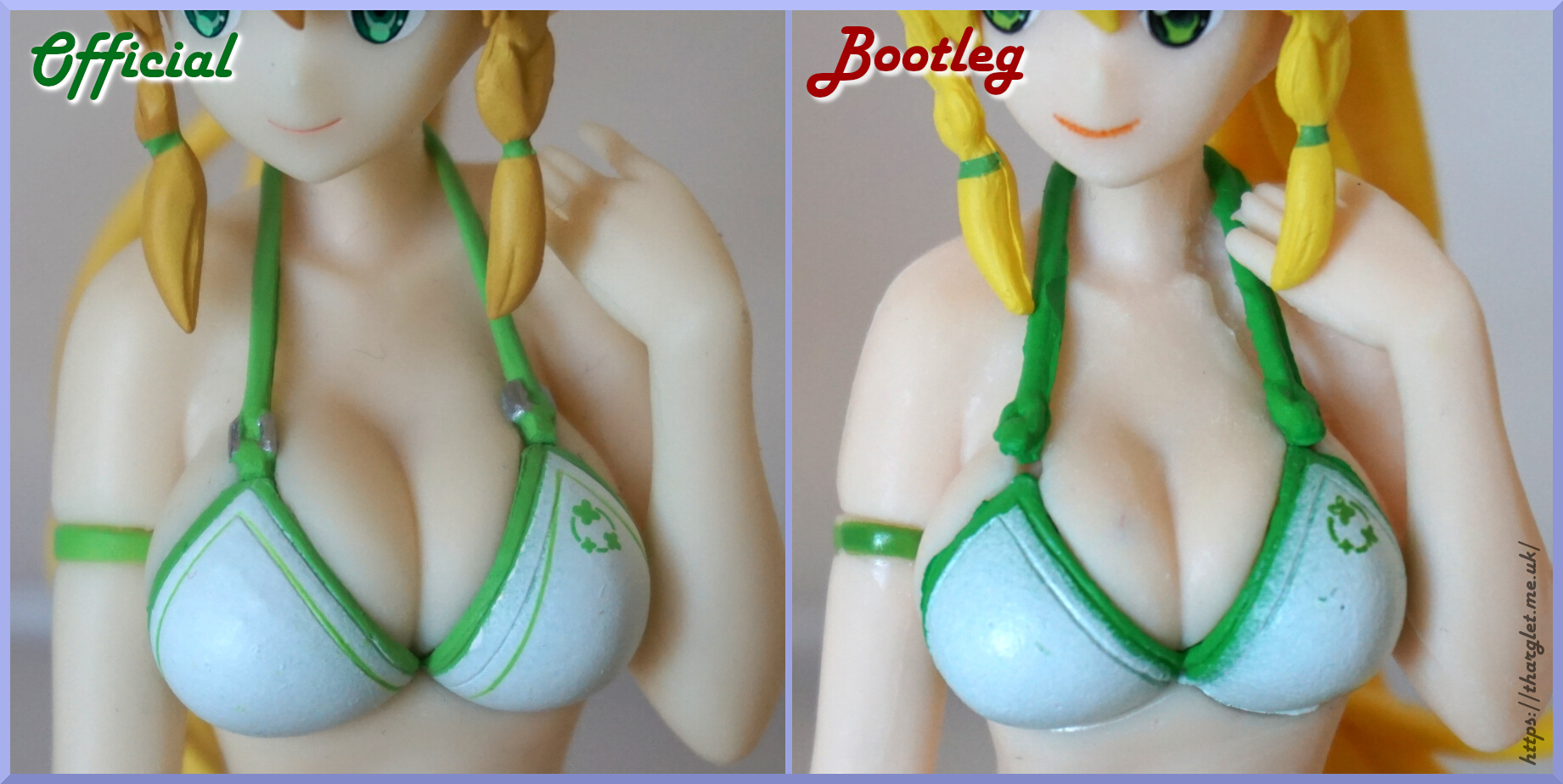 There was an attempt.
The official’s is far from perfect on mine – one of the lines runs wayyy off, the silver buckle paint is a bit lacking, but we do have the nice little flower ring detail.
And then we look at the bootleg and realise how much worse it could be. The strap is overly thick and rough, and the buckle details aren’t painted at all. The moulding has gone very badly wrong here – the ends of the straps have gone very blobby and odd. Due to this, neither side of the strap has been assembled properly, with her right side nowhere close.
Moving to the cups on her top, the edging paint is very messy – no neat edges here. The inner lines haven’t been painted at all, and the flower ring has missing flecks of paint. Just underneath her top on the bootleg, we can see a decent amount of overage on the white paint too.
Erm, is the bootleg’s stare-face also creeping people out in this photo?

Both of the actual stomachs on these figures looks fine to me, though the bootleg does have bonus shiny. To the bootleg’s side, we can see a visible seam line that doesn’t show on the official and we have some gapping between the parts.
The quality of painting of the green band on her bottoms is about the same on both, but the bows are much nicer on the original – the green paint matches and the bows have much better definition. On the bootleg we can see the peg hole where the bow should attach, and the bottom of the ribbon has gone to a strange rounded shape. 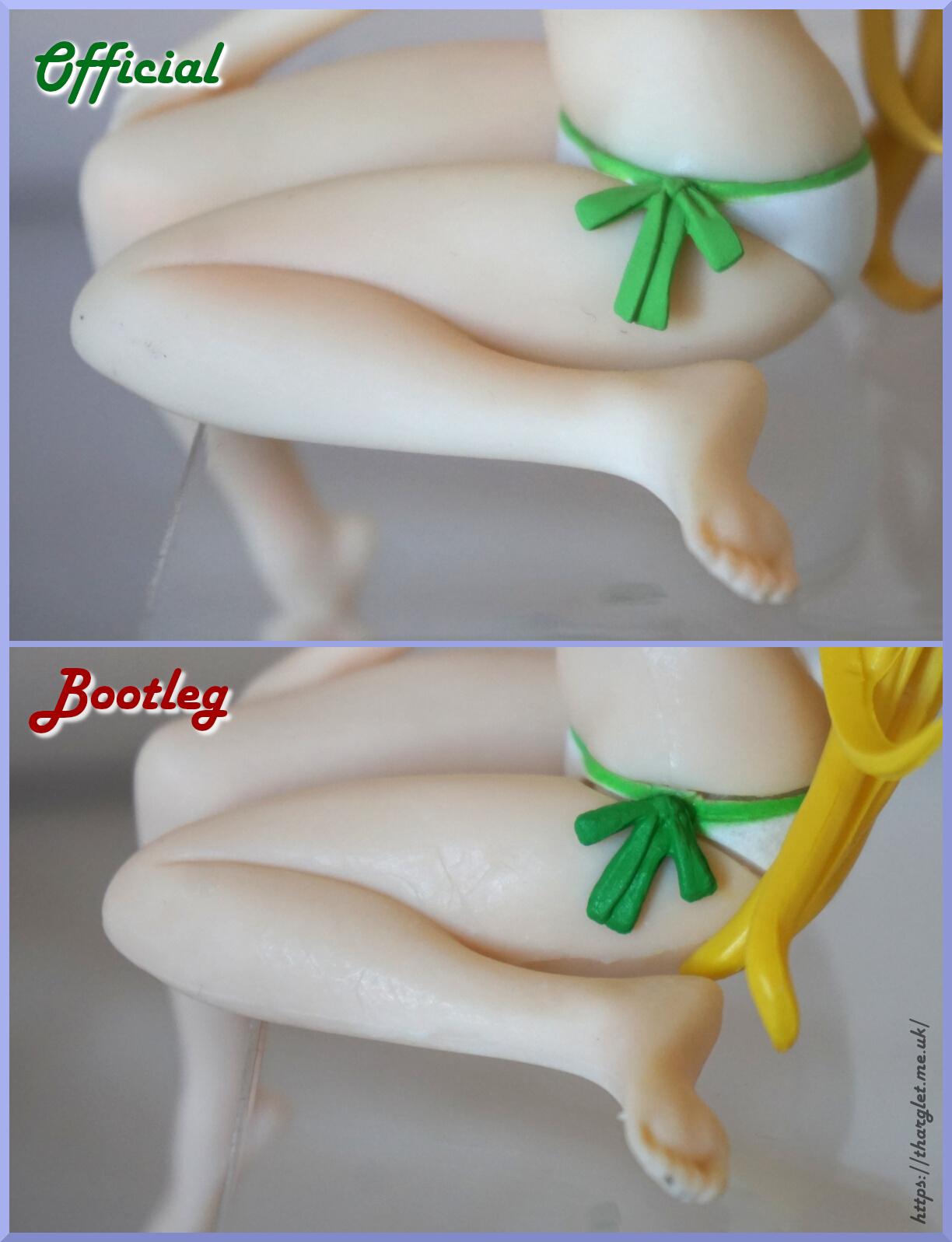 Yeah, the bootleg bow doesn’t look any nicer from this angle. And we get to see her leg looking like it might fall off.
The quality of the plastic on the bootleg’s leg is also particularly bad here – we can see lots of small scratchlike imperfections in the plastic. 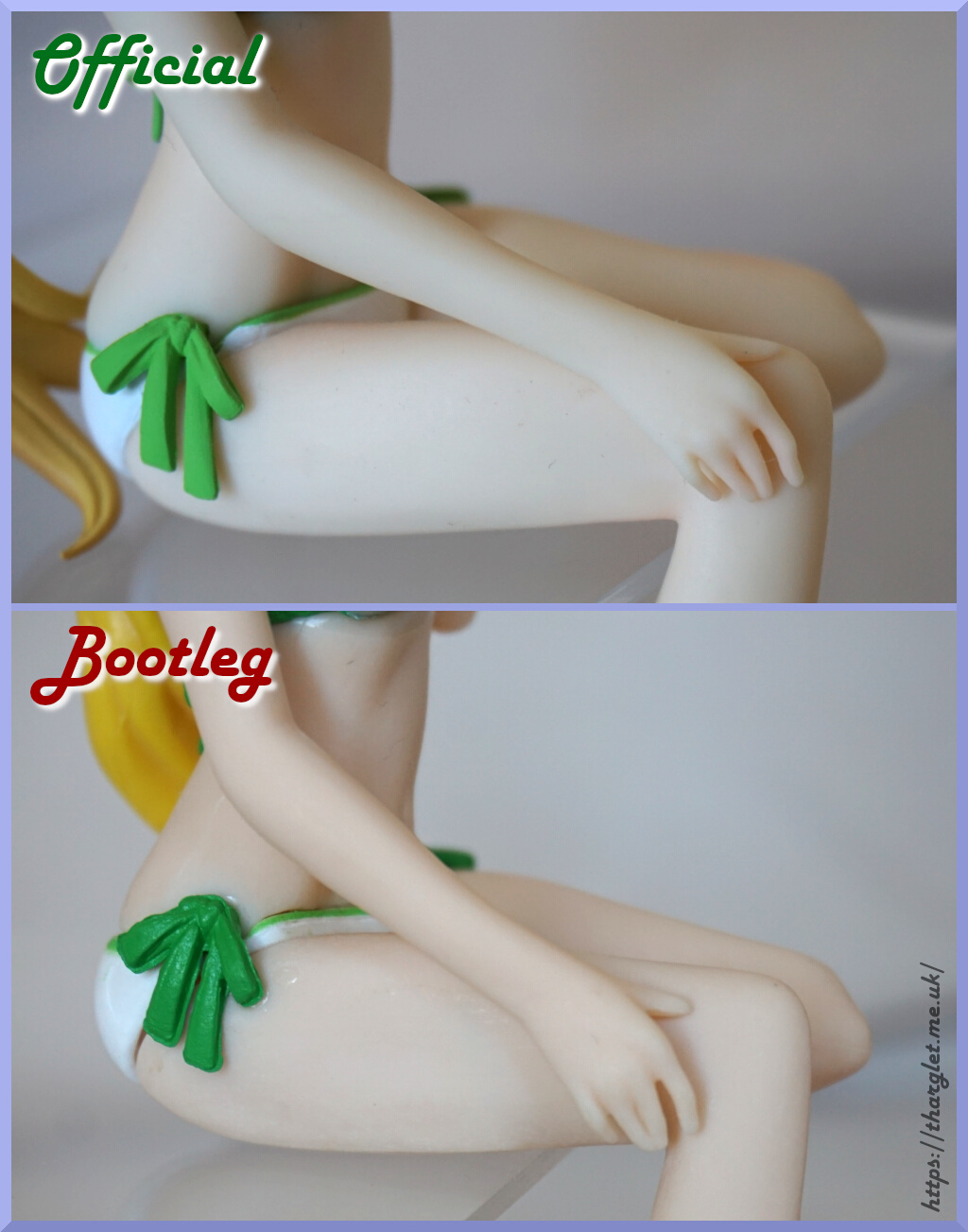 Again, the bootleg’s bow is very messy and the wrong colour – there’s a surprising amount of excess plastic left on the bow. Around the bootleg’s bow we can seemingly see some bits of stray glue.
Moving to her hand, the bootleg’s has sunk down a bit so it is no longer resting on her knee – though this change in pose isn’t particularly noticeable unless you have them side-by-side. The bootleg’s hand though lacks definition and has become blobby and looking slightly mutant.

Focus didn’t go so good here… Stupid bootleg hair getting in the way when it shouldn’t do.
Surprisingly, this part came out OK on the bootleg – was expecting it to be as deformed as the hands, but the feet actually came out OK.

Yeah, minimum effort here for the bootleg. Here we can see how poorly assembled this figure was, with massive gapping on both legs. We have a very obvious seam, and the shiny, rough plastic. Plus some excess plastic that wasn’t shaved off.
The official doesn’t have any of the above flaws, and actually has some paint detail on the skin, despite this part not usually being visible.

The bootleg you very much get what you paid for – it’s a low-quality copy of the original with many flaws. Even at a distance, some of the defects are visible – the extra paint on the top, the poor assembly of the parts (especially the top’s strap) and the poorly painted mouth giving her a slight creepy vibe. Even if you can live with the visual flaws, this bootleg has a propensity to roll over due to the incorrect assembly of parts – I believe it’s mostly to do with how her hair was glued on at the wrong angle. So as well as being kinda ugly, she’s not functional either, so definitely couldn’t recommend.
I think the poor quality is fairly evident, but I can see a novice collector dismissing most of the flaws as “cheap prize figure”. It’s a bit unfortunate my official does have a major paint flaw, but looking at the MFC gallery not all of the official ones are like this (might even just be mine).