Time for another noodle stopper – this time Sinon in her swimsuit. Hoping for a day at the beach instead of a day in your noodles. Let’s see if we’d let either of these anywhere near a pot of noodles.

The official I pre-ordered from AmiAmi 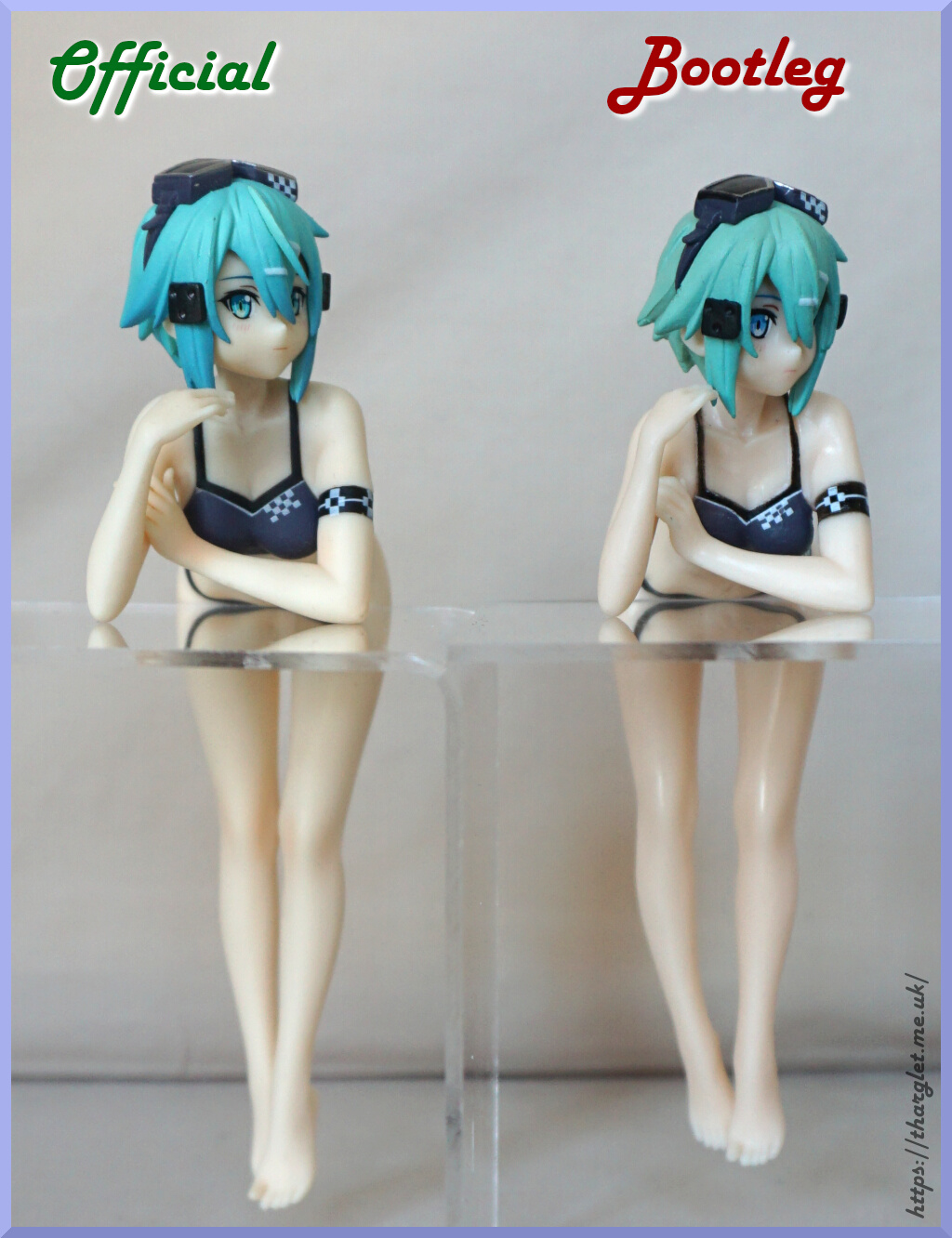 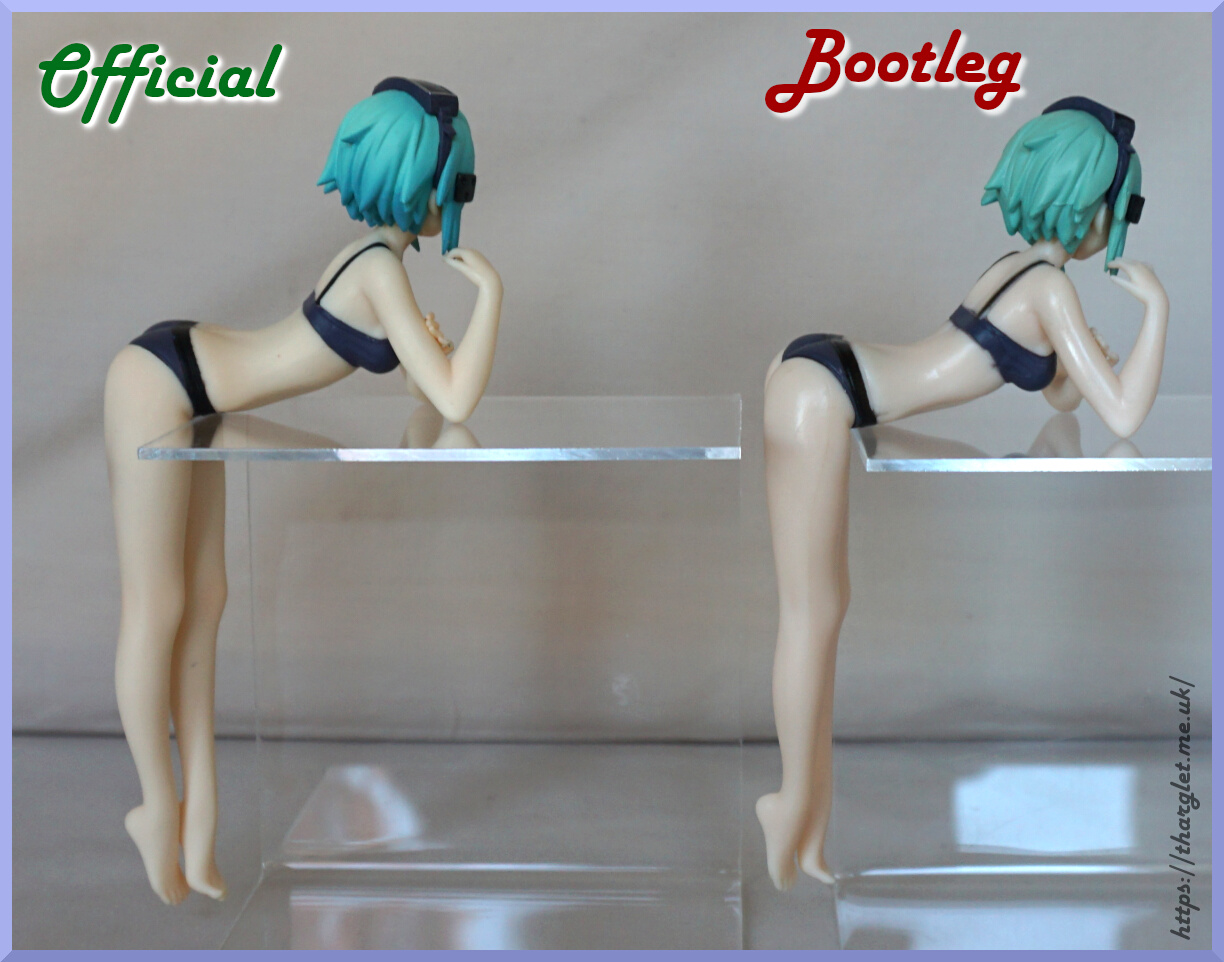 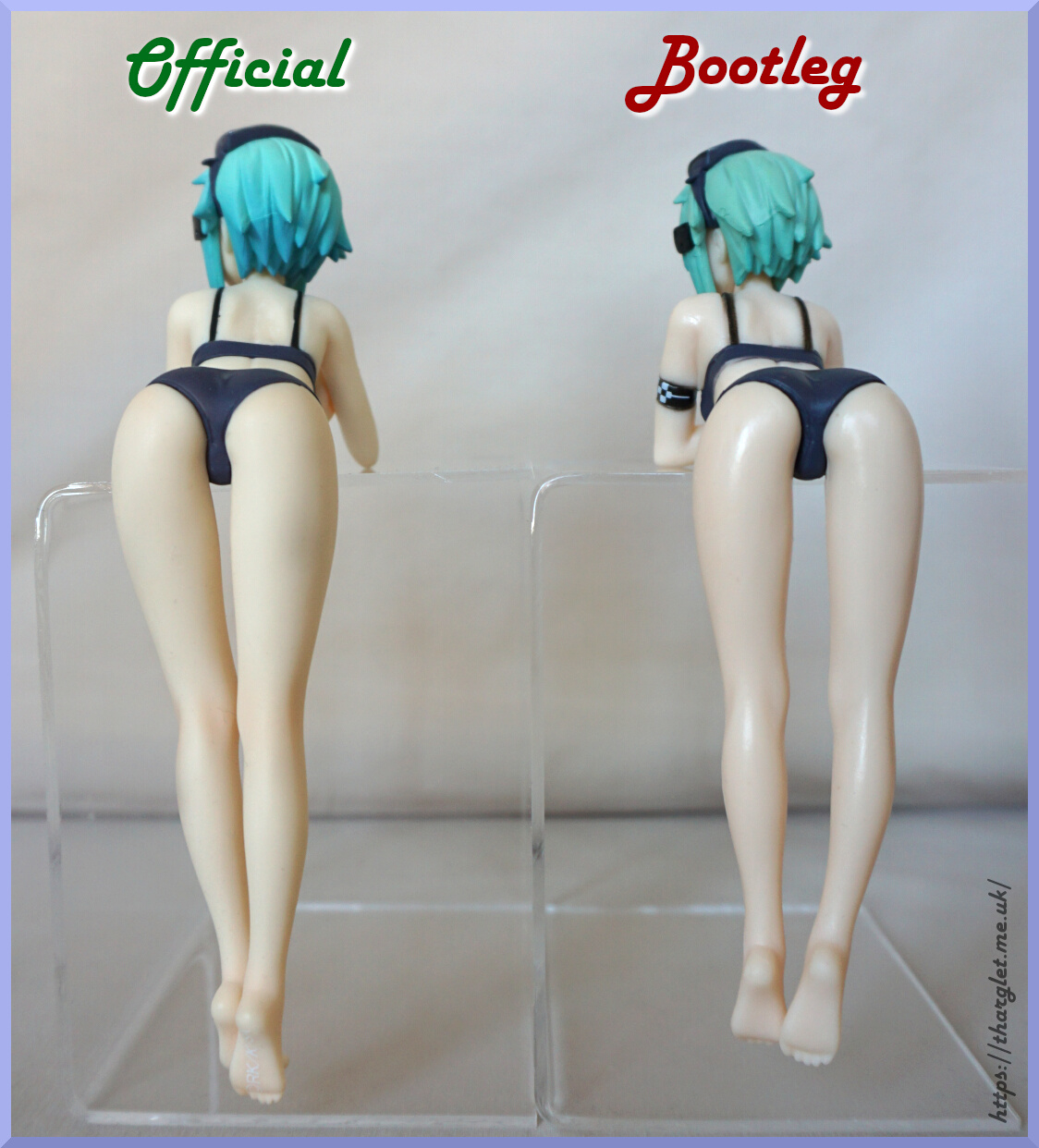 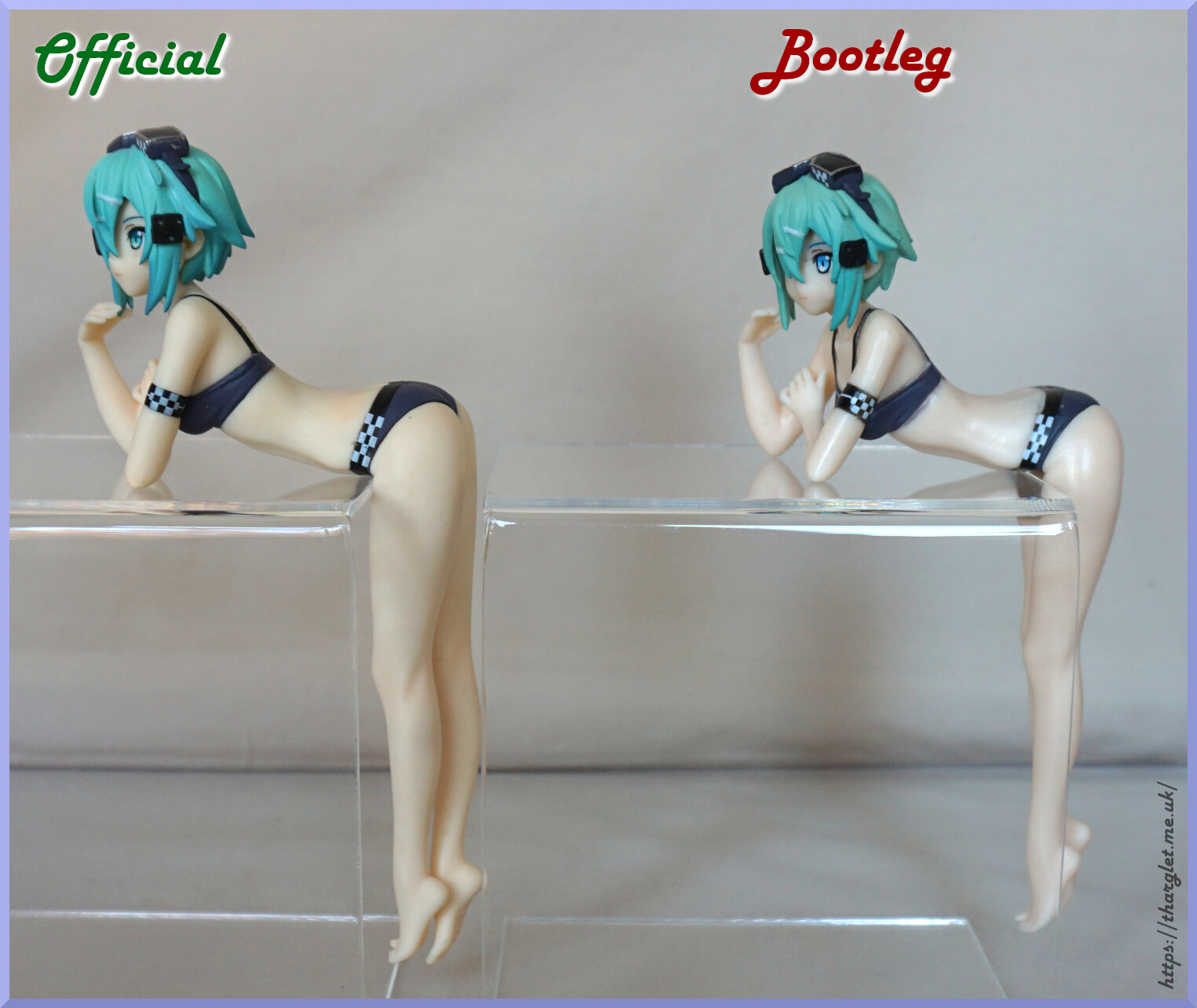 Looks like bootleg Sinon has slathered on the sun block a bit too thickly and she is very shiny. Paintwork is noticeably mediocre in a couple of spots, but at least she actually stays on the stand.

This figure isn’t very complex, so this will likely be one of the shortest Official vs Bootleg articles I will do…
Let’s start with the face, as is traditional: 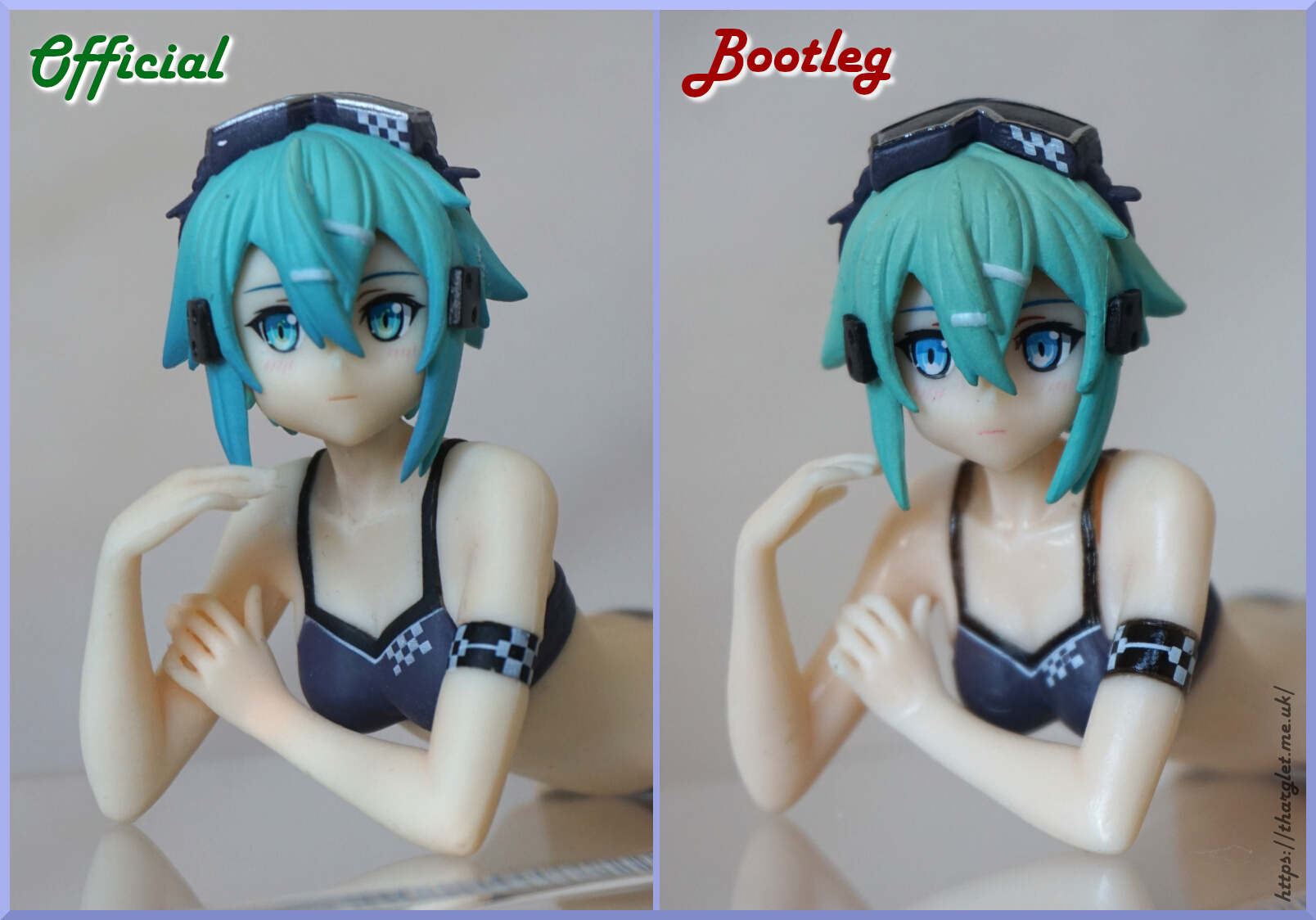 The bootleg’s face is actually decent, though the eye colour is off. Hair is a similar story – it has similar shading, but the colour is off. The white chequered print suffers though – all of these bits are printed unevenly on the bootleg, with little in the way of alignment.
Looking to her right arm, we can see where the bootleg hasn’t been assembled correctly, leaving a gap between her swimsuit strap and the arm itself.
Looking at her hands, the bootleg’s have ended up slightly out of place, making her pose look a little off.

Side of her head:

And the quality nosedives. The square hair grip(?) in her hair has become a blobby shape on the bootleg. The bootleg’s hair has some blobby, messy paint plus the shading doesn’t extend around to the sides – only the front-facing parts. On the official, the paint shading continues around to the hair tips at the back. The bootleg’s goggles are also sporting some paint mishaps and poor moulding.

Top of her head:

Main feature here is her goggles – the official’s look nice, if not terribly see-through. The bootleg’s are quite badly painted, with the silver all over the place and the inner blue-black layer not being evenly painted, leaving a gap in the paint towards the top.
Her stealth ahoge has also been flattened on the bootleg, whilst her fringe noticeably sticks out on the official. 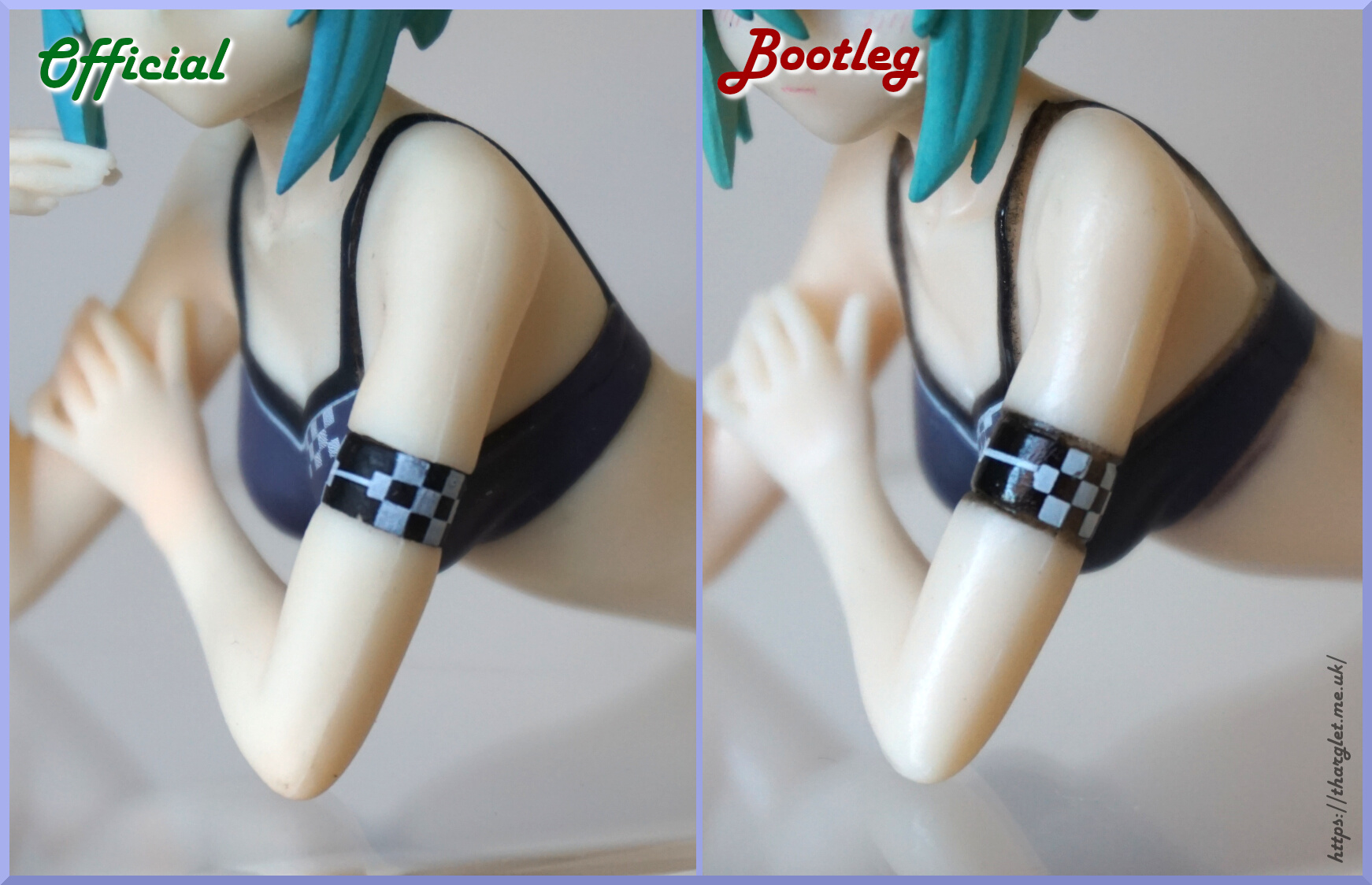 The bootleg’s has been painted very sloppily, leaving a lot of black paint smeared on her arm. We also might have a fingerprint just to the left of the chequered marks. Near this spot we can see where the print didn’t quite align properly and the line doesn’t go into the middle of the chequered square.
The official isn’t flaw-free, but certainly looks a lot nicer than the bootleg to me.

Let’s turn her around a bit:

The poorly-assembled parts on the bootleg show up a lot here, and the way the black paint has been done on the strap makes it stand out more.
The grey paint on the bootleg doesn’t fare much better either – lots of slop on her skin, and a chip in the paint on her bottoms. All the paint is overly shiny here too on the bootleg – most of it is fairly matte on the official. We can see the paint isn’t flawless on the official – but this is fairly normal for a figure at this price point. From this angle, the thinness of the bootleg’s paint on the straps becomes fully apparent – could’ve done with another coat.
Looking at the hair, the moulding isn’t as sharp as the official, which is to be expected of a bootleg. The seam lines are about the same here though.
The bootleg’s legs are not properly inserted either, especially the left. 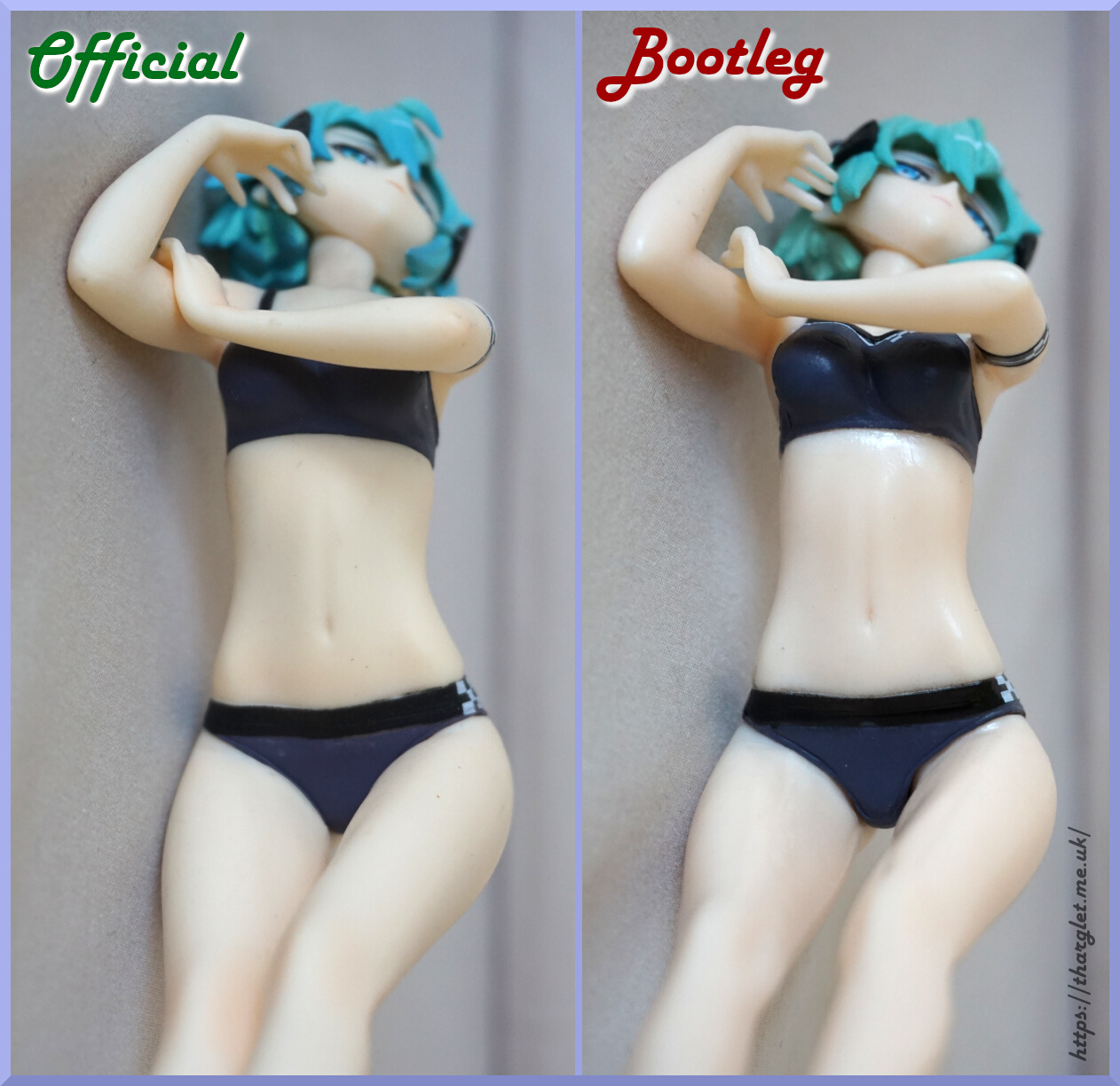 Paint is a bit more all over the place on the bootleg, plus it looking shiny. The bootleg’s left leg looks like it wants to escape the rest of her body.

The band details are sort of lost to the shiny paint on the bootleg, and both legs are slightly outward, revealing more of her crotch. Official is a bit marred here, but I think the paint is better as it doesn’t have the missing bits at the bottom of the band.

And now we come to the end of Sinon… her feet: 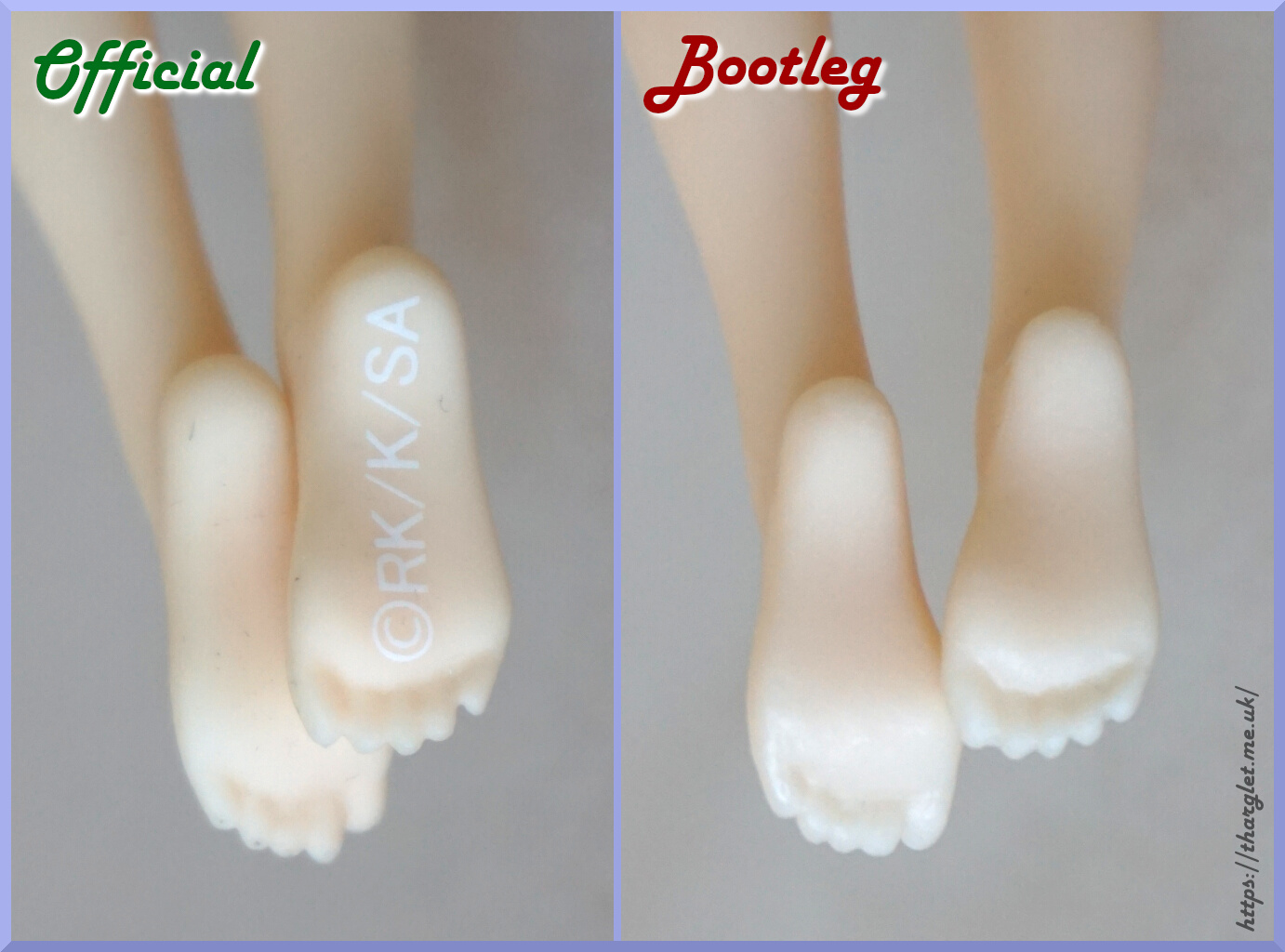 The bootleg’s are slightly different in position, but have otherwise come out well. And a feature unique to the official: a copyright notice, making this the easiest spot to check if it is an official version or not.

As far as the noodle stoppers go, this seems to be one of the better ones – the paint isn’t hideously off, has some shading, and she actually perches on the stand as she should. However, the bootleg is still noticeably inferior if inspected – the shiny plastic does give it away at any distance, and the paint is spilling out badly in various spots. Some parts are assembled incorrectly, leaving noticeable gaps.
For telling the two apart, the shiny skin is fairly obvious, along with the lack of copyright on her foot. Whilst the chequers have some flaws on the official, they are a bit of a mess on the bootleg.