Last and potentially least, we’re now up to the last noodle stopper of this set – Yui from Sword Art Online. And one thing that didn’t pass my notice is that Kirito even gets the shaft when it comes to bootlegs – there isn’t a bootleg of his noodle stopper.

The official I pre-ordered from AmiAmi.

Yui comes with one pair of parts to attach – her wings: 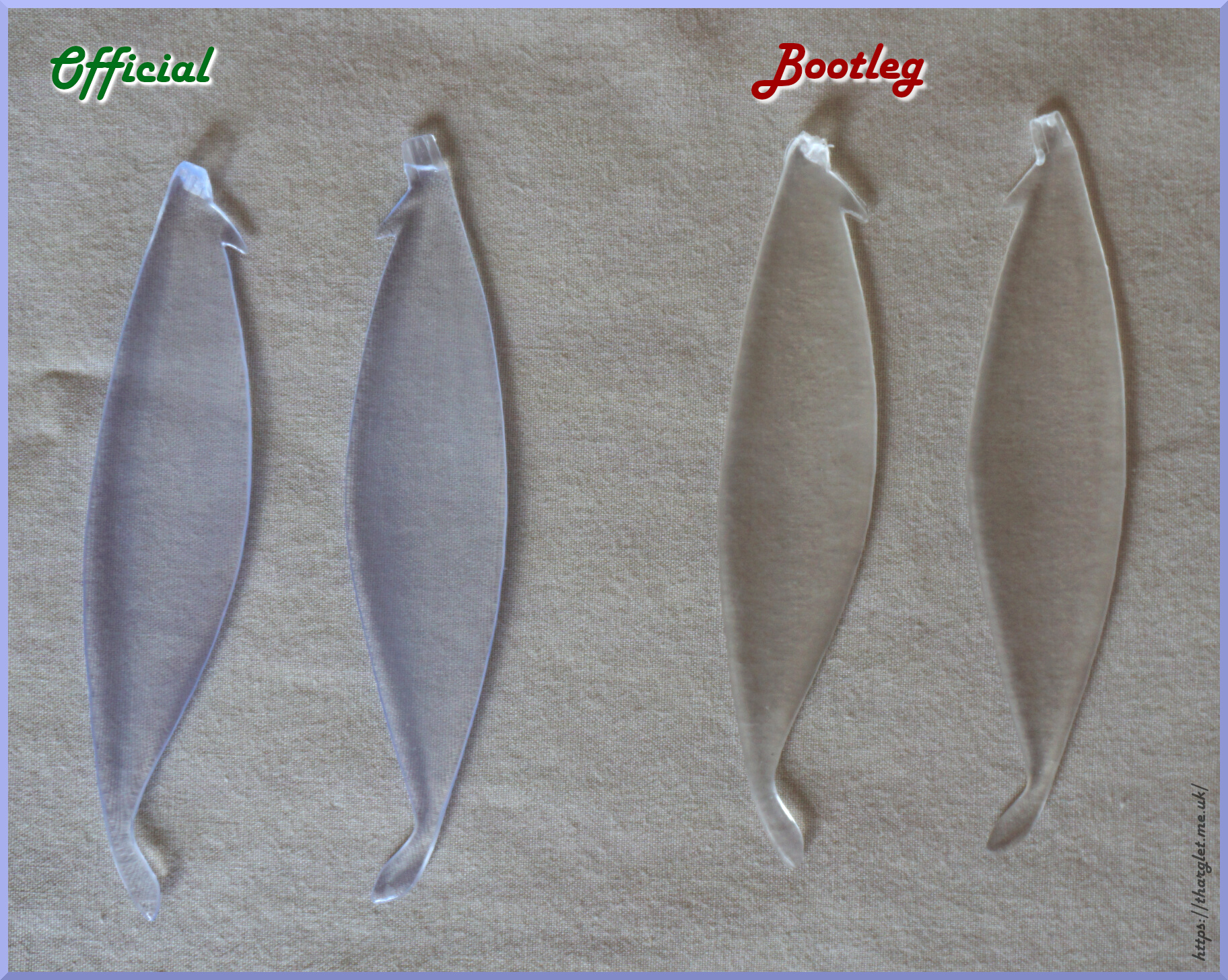 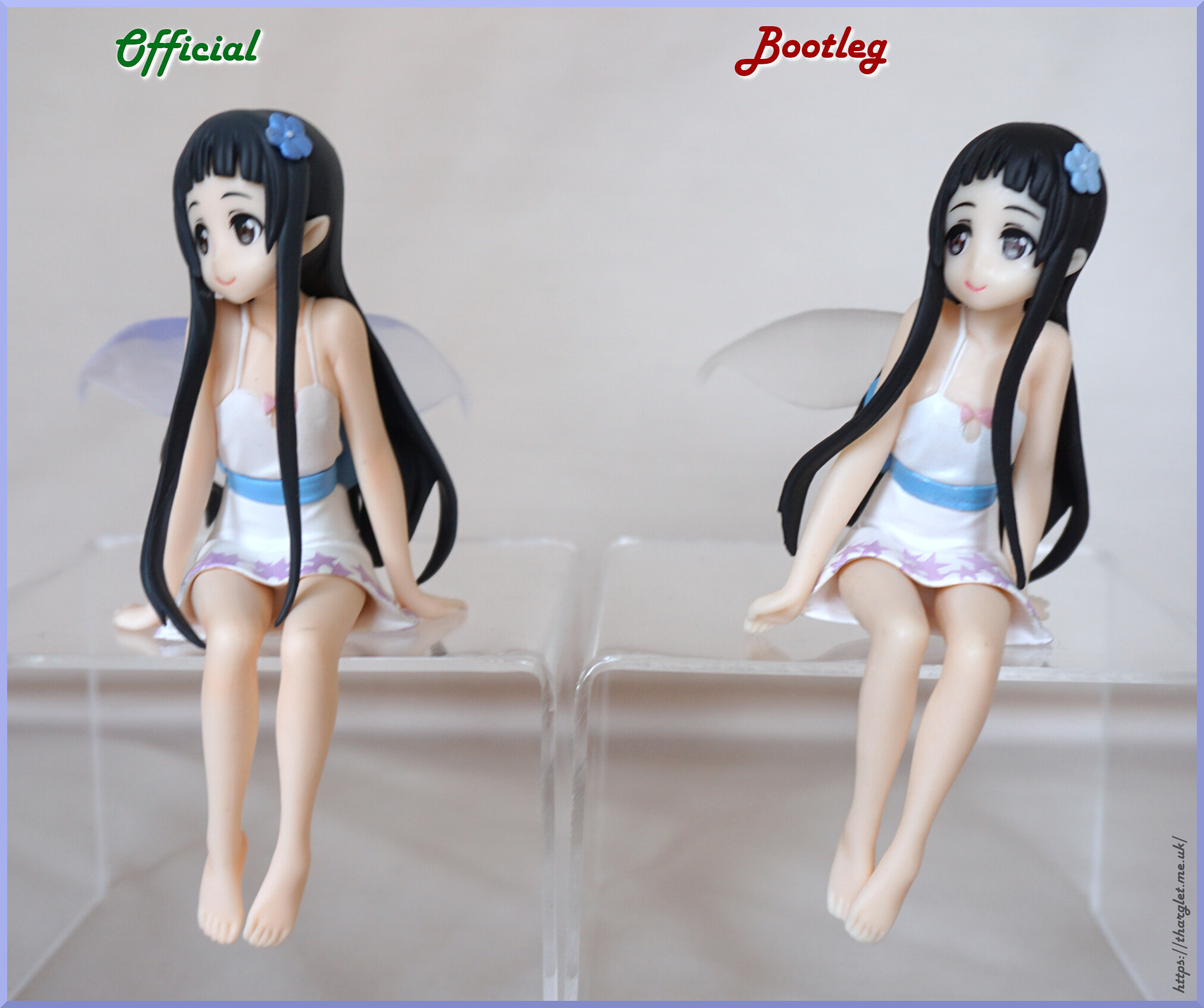 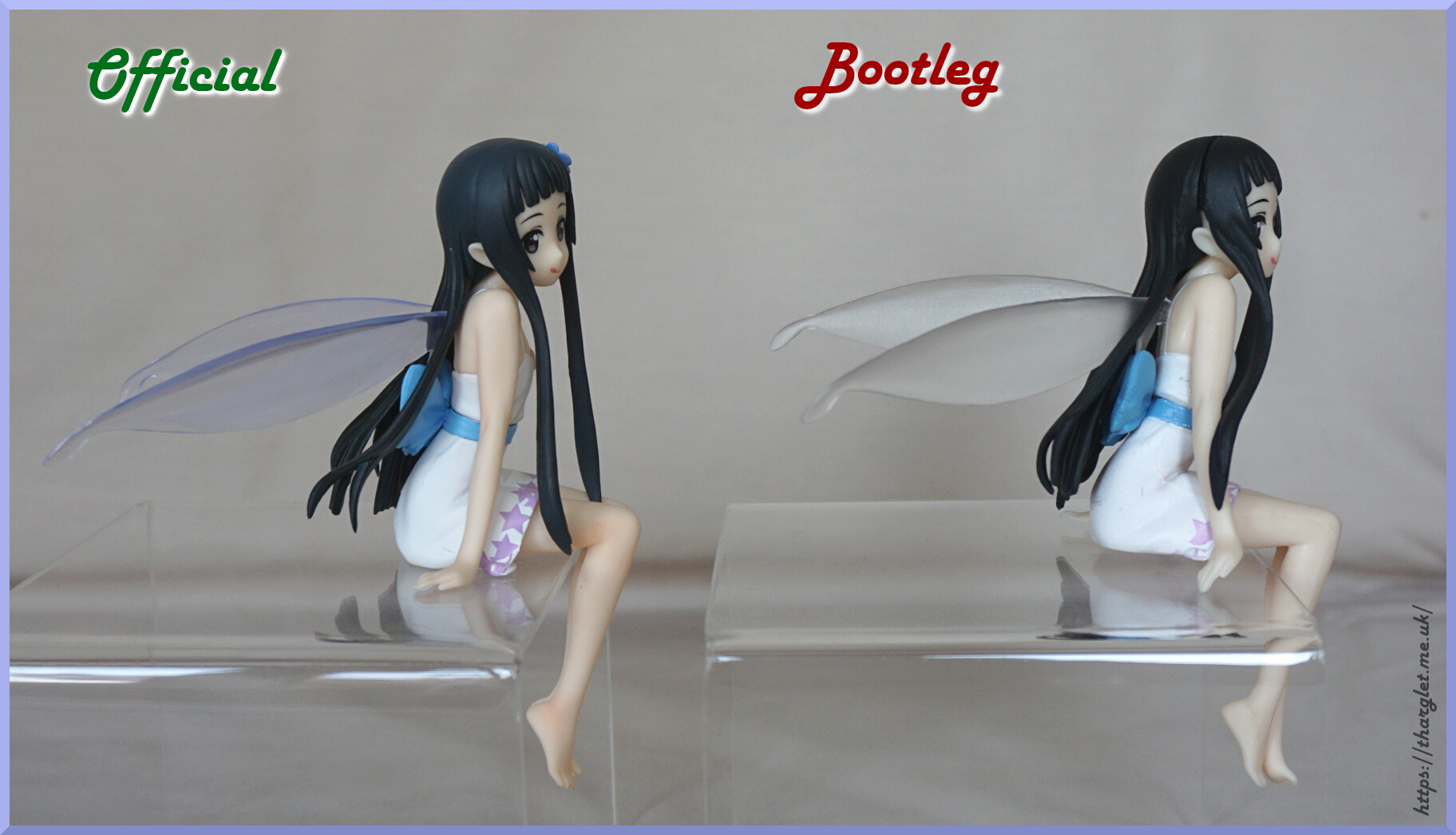 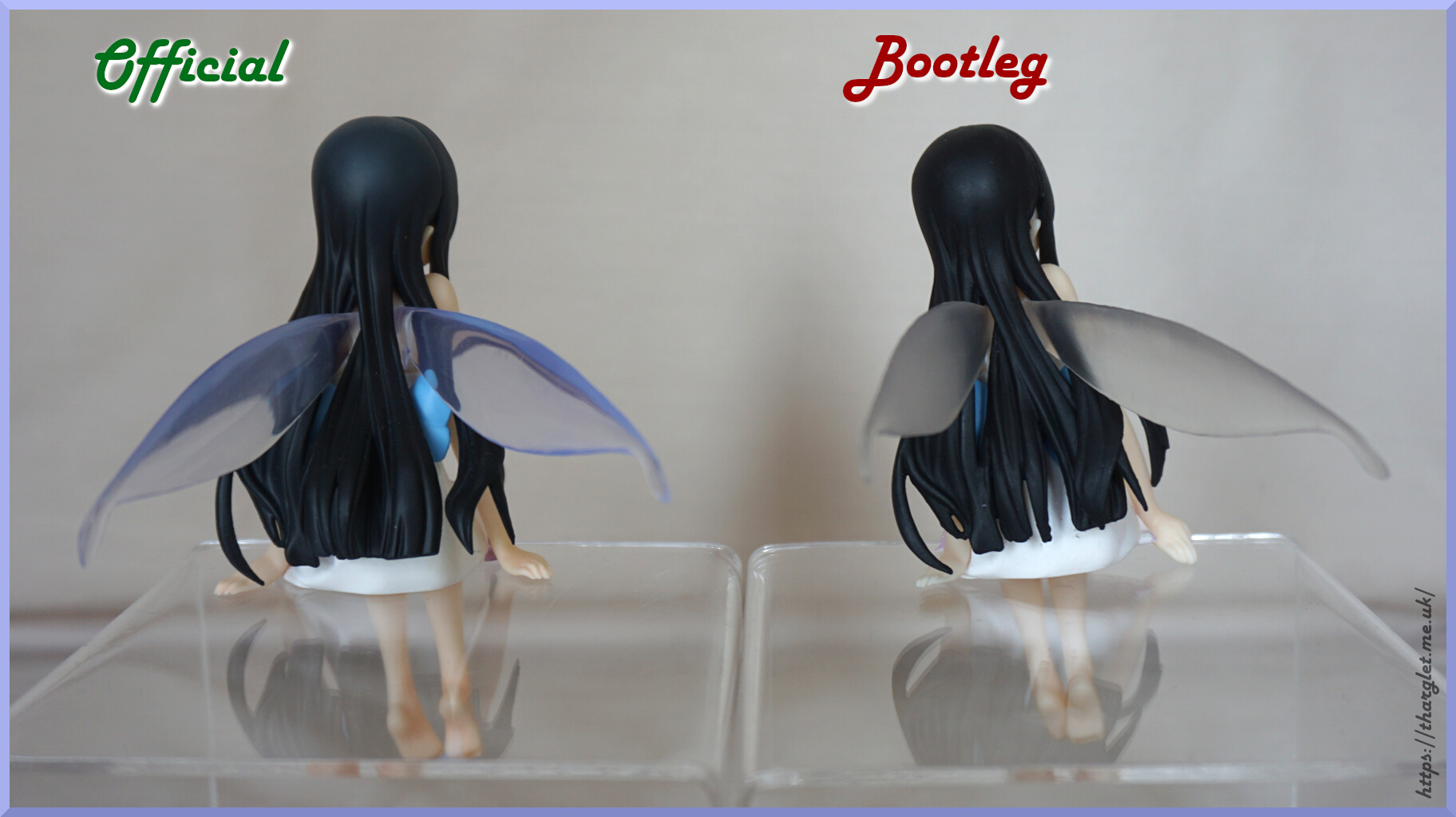 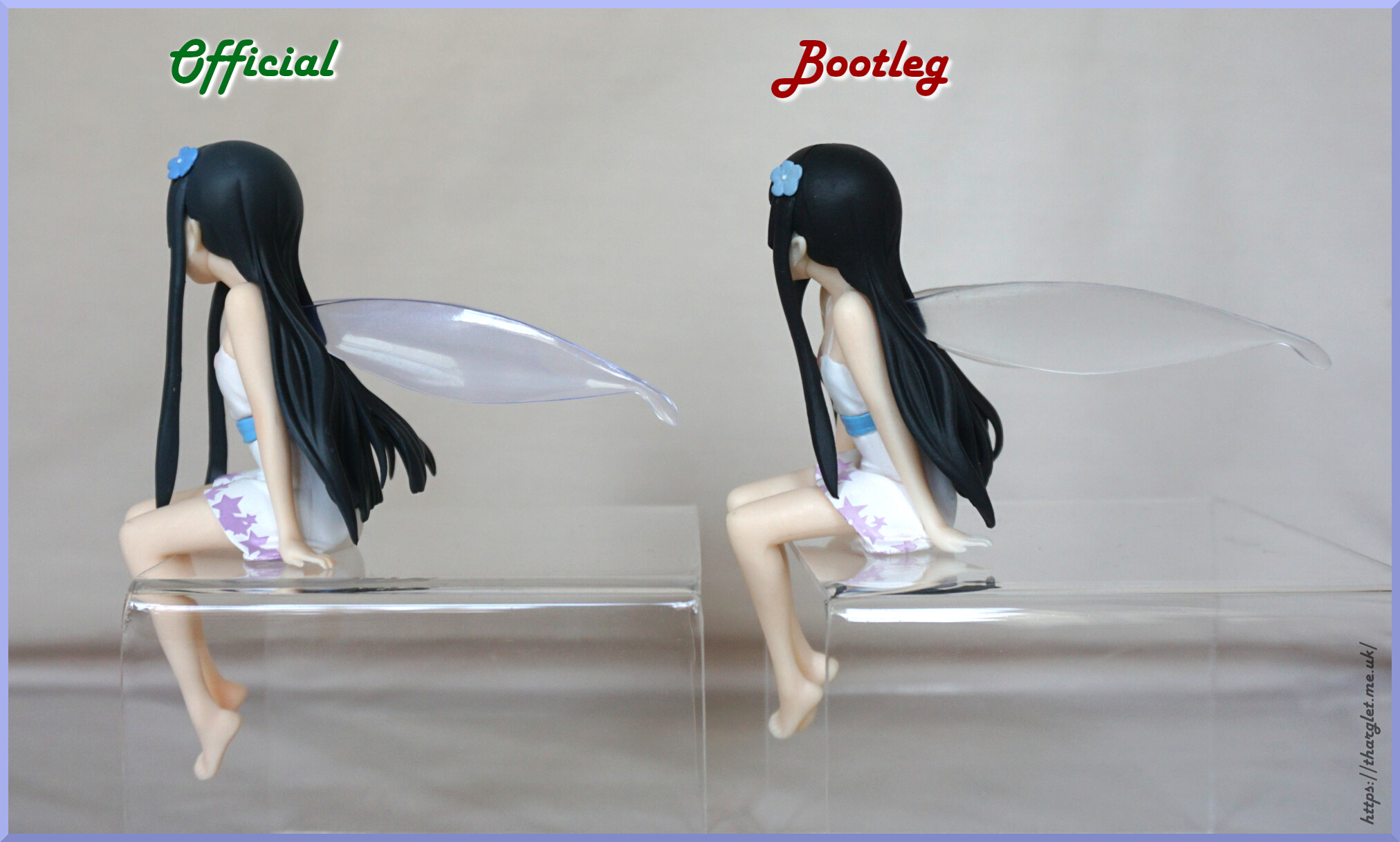 From the front, the bootleg is definitely veering off to one side, but she does manage to stay balanced. Some of the paintwork is dodgy, which we’ll look at in close detail below. 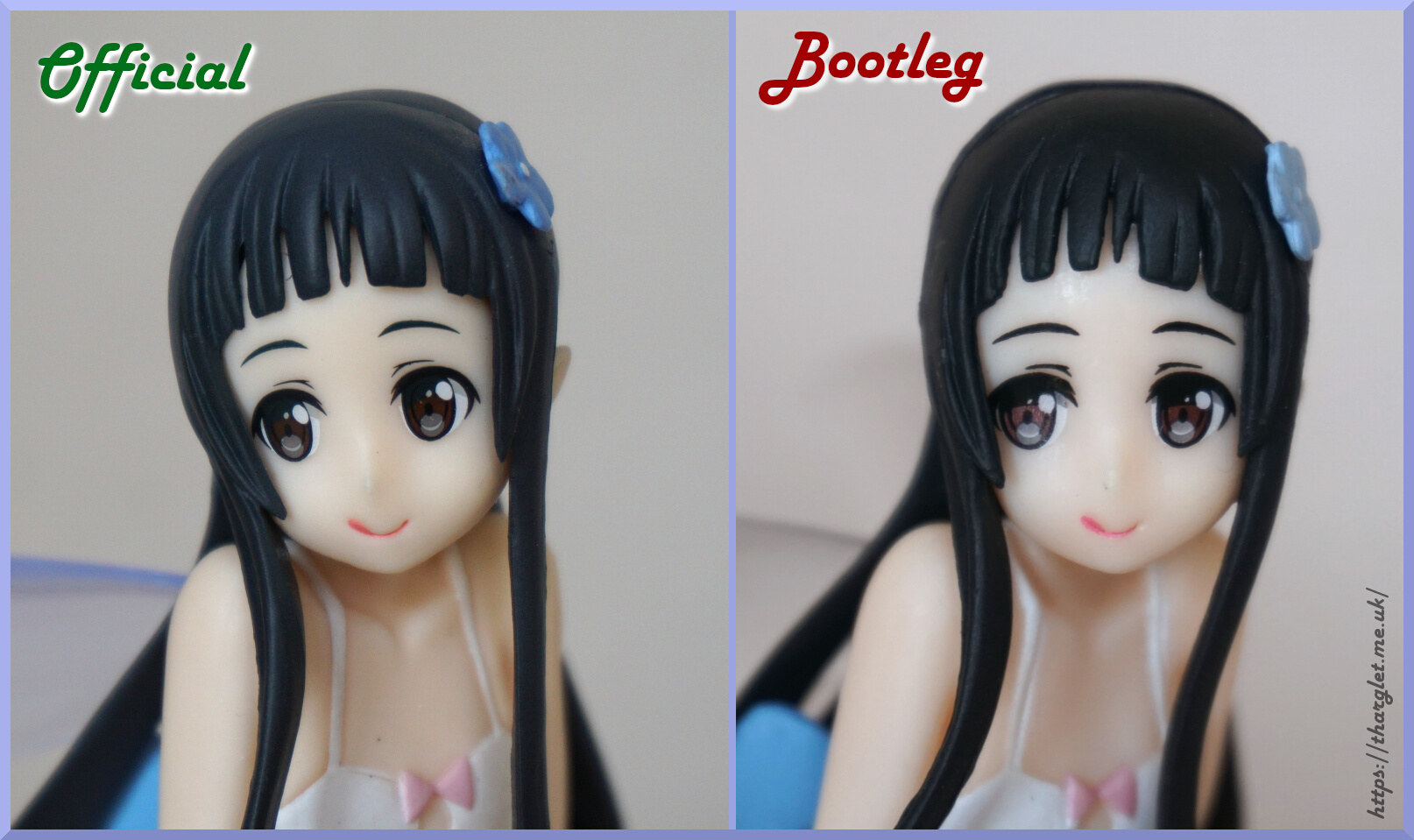 For the skin plastic, we’ve got a sweaty look on the bootleg with its shiny finish. The colour isn’t off by much, which is a rarity.
Moving to the eye decals, we’re certainly seeing a degradation in quality – we’ve got some yellowish imperfections and the eyes aren’t even the same colour on the bootleg. The entire eyes on the bootleg seem to say “low print quality”.
Onto the mouth – I’m not a big fan of how the sticking-out tongue is done on the original, but the paint bleed on the bootleg makes it even less obvious it’s supposed to be her tongue and not part of her lips.
The hair mould is noticeably jankier on the bootleg, and her hair is plain black unlike the blue-black of the official. 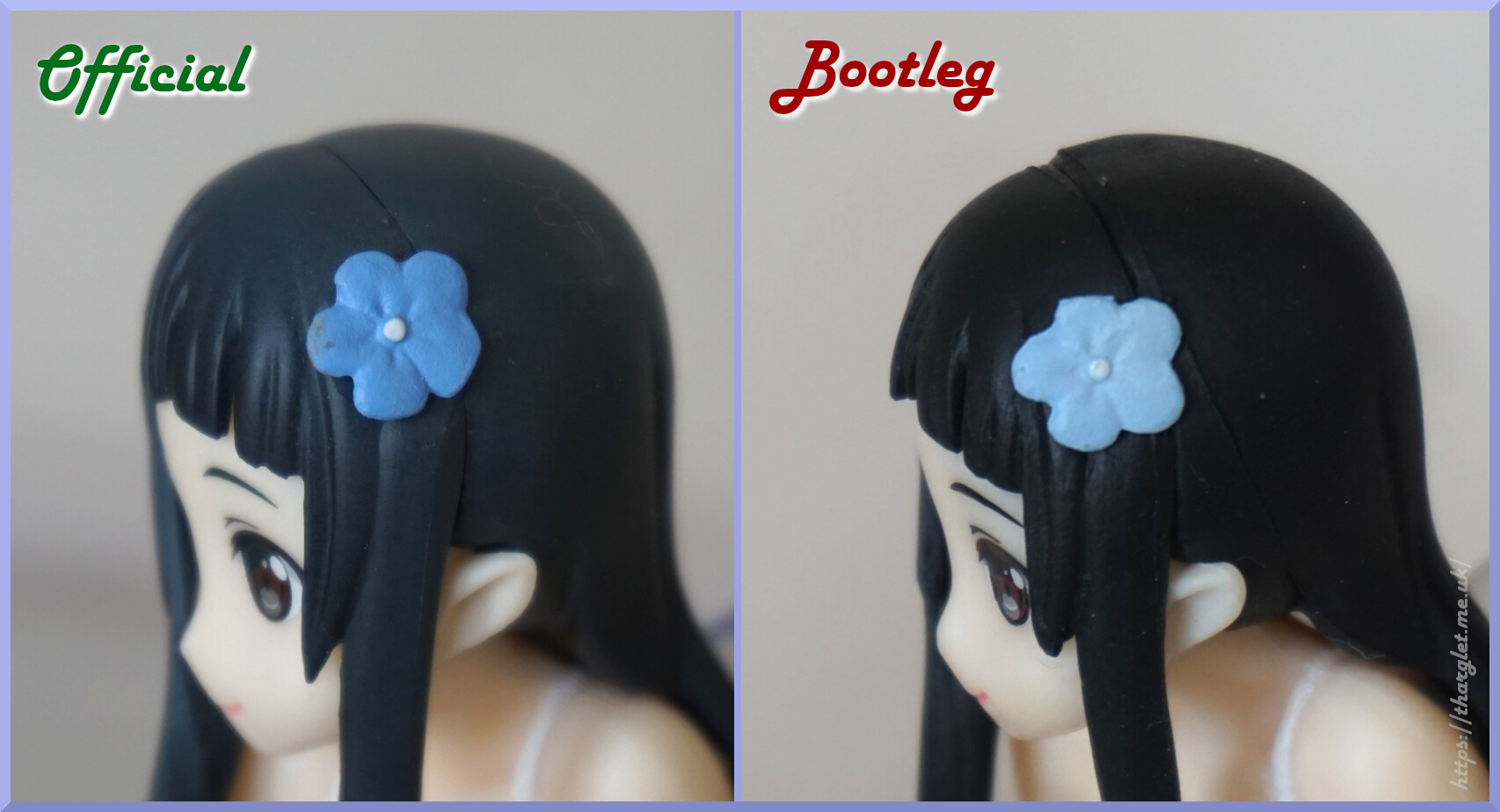 The bootleg’s flower is a paler blue, but I don’t think this really detracts from the figure. However, the left-on excess plastic at the top and more squished nature of it does.
Apparently my official has some kind of mishap/dirt on it… maybe I should go see if I can clean that later.

Other side of the bootleg’s head: 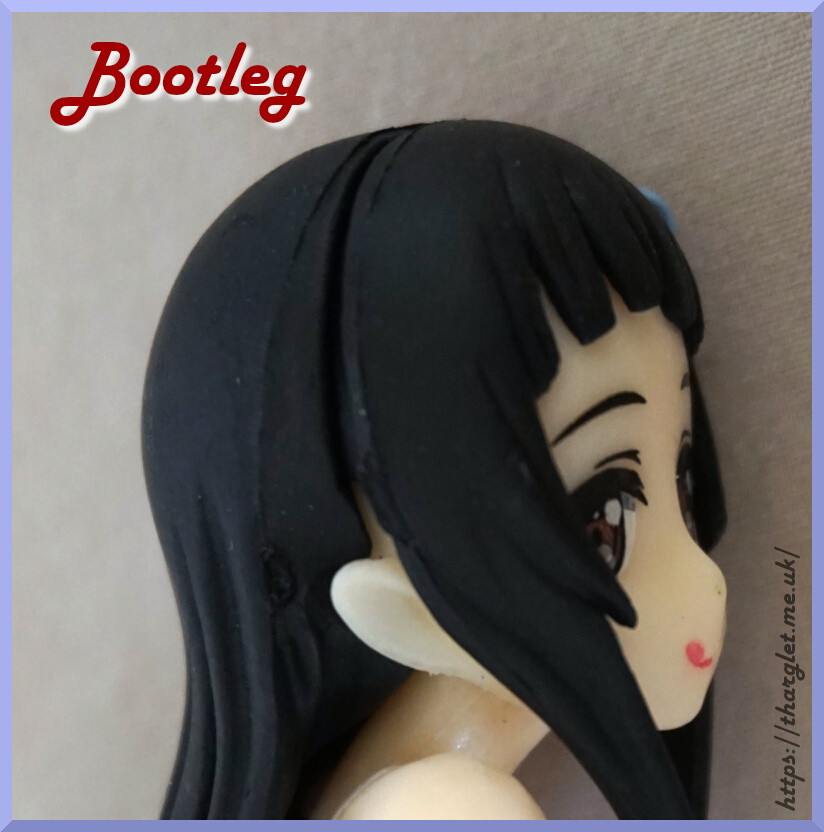 Oof, that poor bootleg seems to have a splitting headache! Poor casting and assembly has meant she has an obvious gap on this side. 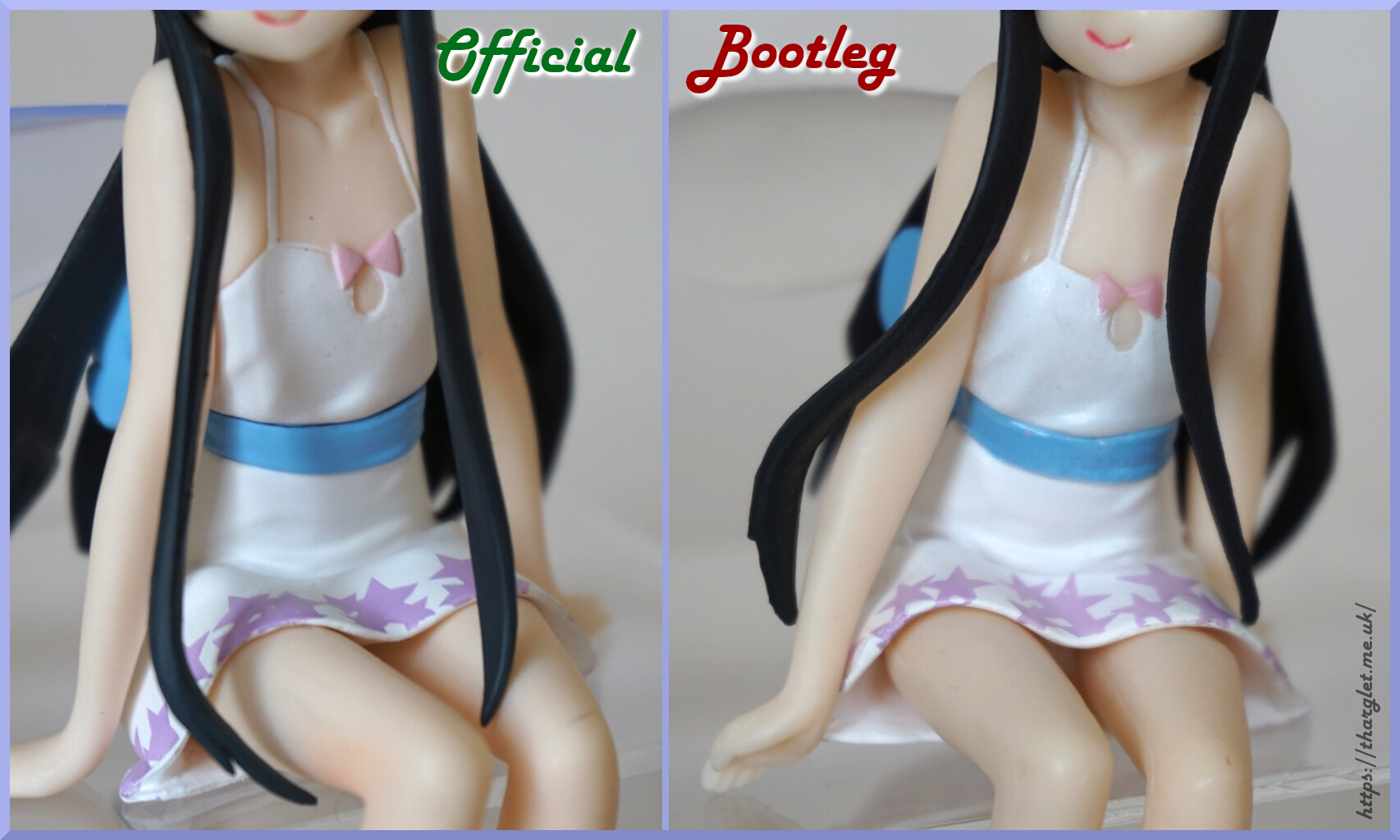 The straps on the bootleg have been lazily painted and spill out significantly onto her body. The white paint has also got partly onto the bow, but not too badly.
The moulding and overall appearance of her cloth belt on the bootleg isn’t as good as the official with its shiny finish and stray non-blue paint.
We can see the stars are a paler purple too – let’s take a closer look at those.

Bottom of the dress: 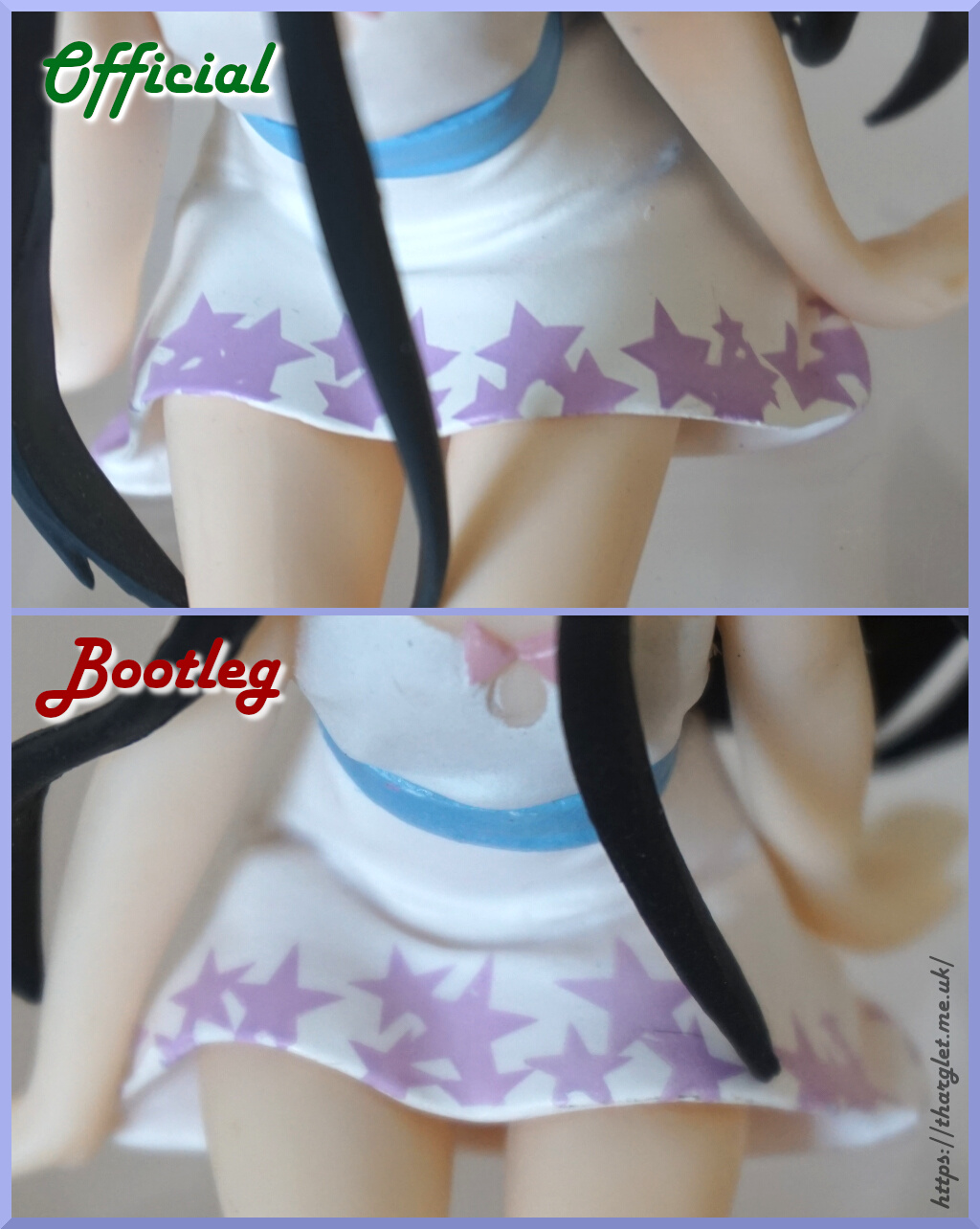 The bootleg print is a few shades lighter and doesn’t quite line up with the edge of the dress. The pattern also doesn’t seem to be the same, with the stars being more sparse.

Other side of the dress: 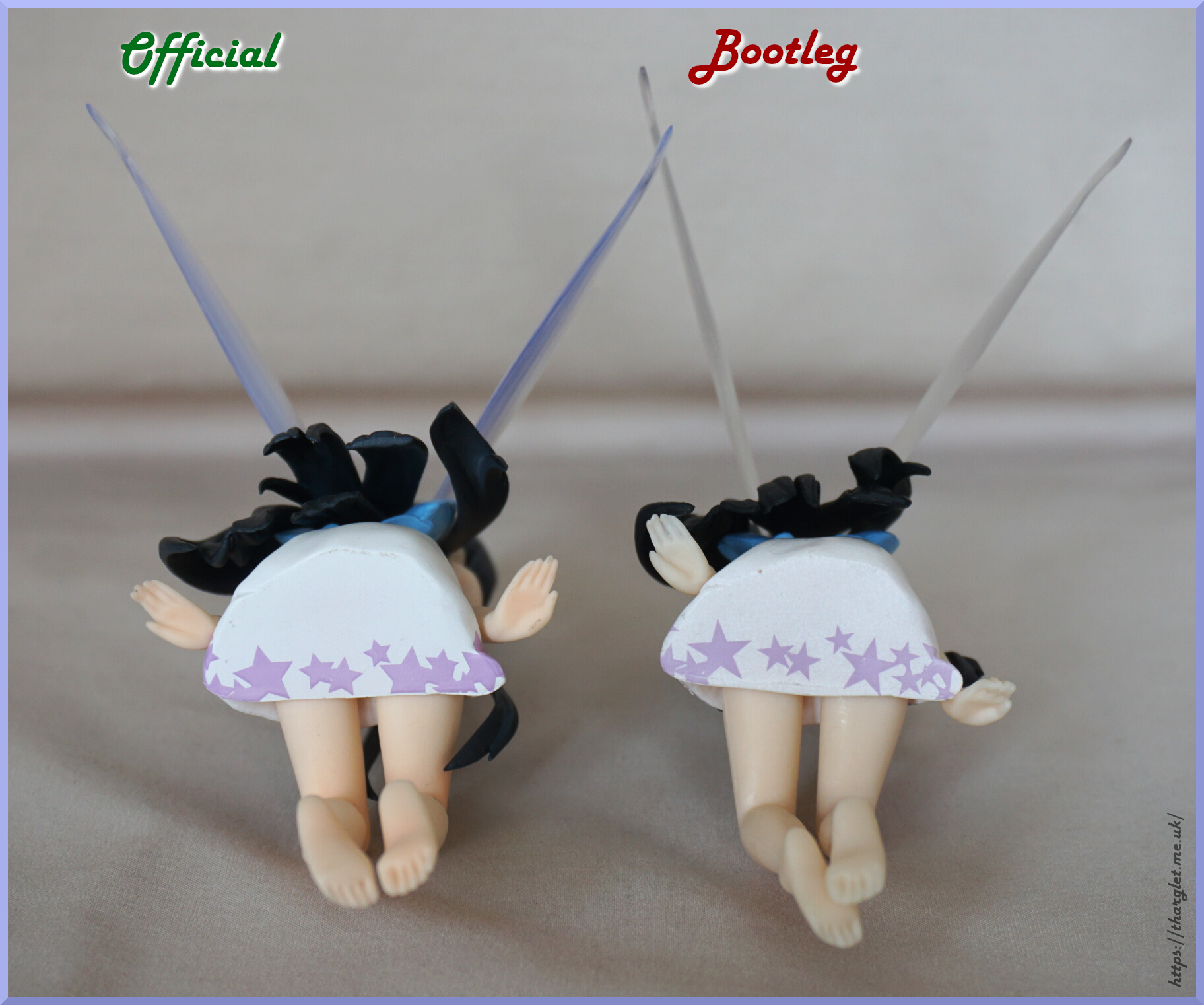 The stars are also lighter and sparser here on the bootleg too – looks like they may’ve mostly chosen to avoid the edge of the dress here. The hands of the bootleg are also translucent caused by thin plastic and thin paint.

The bootleg’s arm is at a different angle to the official’s, making the hand point backwards instead of sideways. The poor moulding on the bootleg makes the bootleg’s hand awkwardly shaped, and the thinness of the plastic is apparent from this angle too, with her “darkened” fingers. 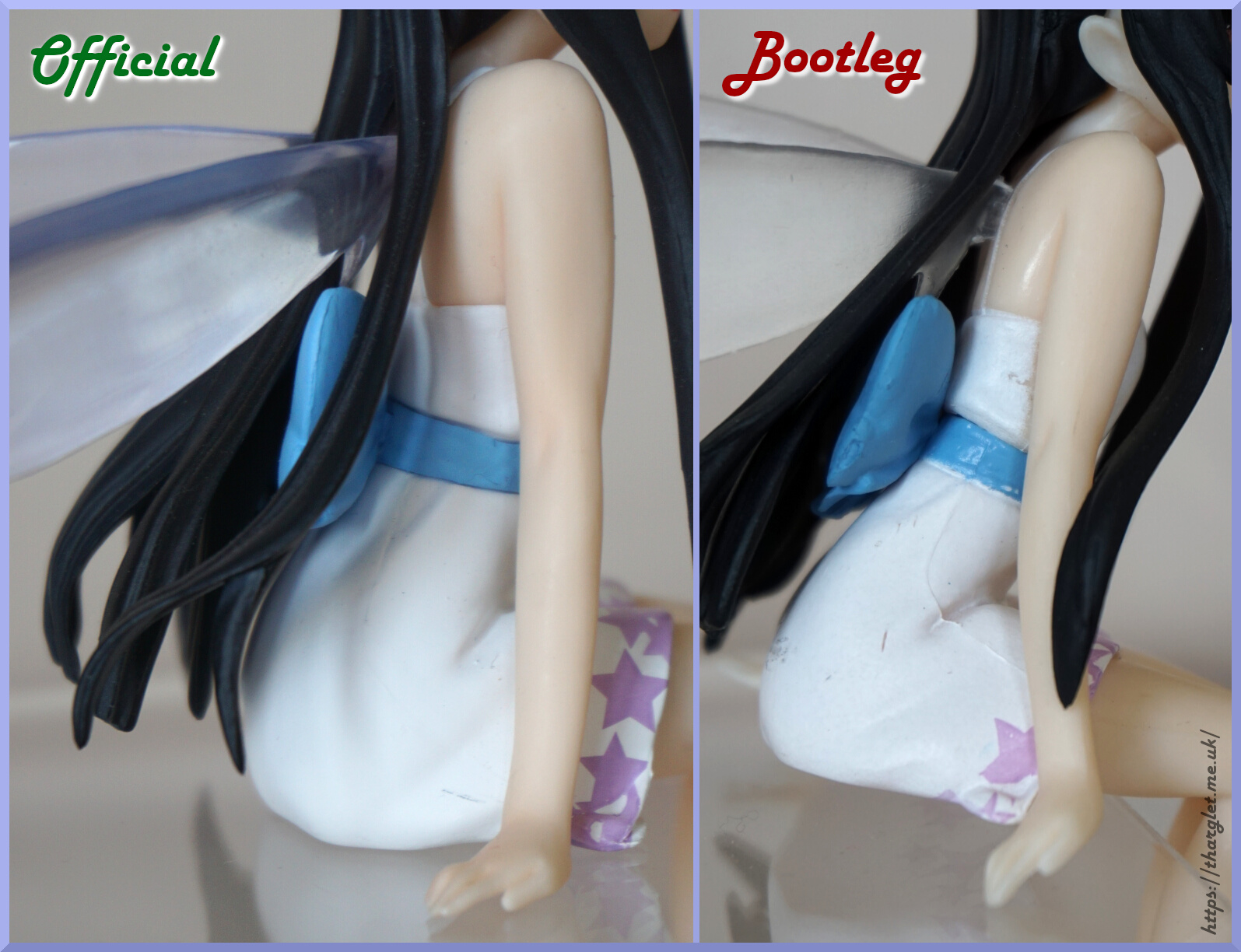 The shininess of the bootleg’s skin is visible in this photo near her shoulder. The white paint has a number of scratches and imperfections on the bootleg, plus we have a very visible seam. The band is also not very good on her – the paint doesn’t reach to the edges, and the parts seem to be different so we don’t have the natural indentations to add detail to the ribbon.
The overall shape of the bootleg is bad – which is why her pose is so off from the front. Here we can see her back isn’t bent right and her backside is an odd shape compared to the official. .
Lastly we have the hair – the bootleg’s being overly black and not posed as nicely as the official’s, meaning it lacks the appearance of motion. The hair strand near her back is also differently positioned – on the official it helps hide where the wing joins to her back, but the bootleg leaves this fully on show. This also reveals how the wing on the bootleg didn’t quite go fully into place – we can see some of the wing’s peg still visible.

Well, the bootleg is cheap. Was cheap and looks cheap. I’d say the main tells on this one is the poor pose, the poor paint and the extra seamlines. Out of the noodle stoppers I got for this batch, I think this one is probably the hardest to tell apart without the official next to it.
Still isn’t great, but not really horrible either until you look up close.