The normal colour versions of the school uniform Q Poskets fairly quickly got bootlegs, so I decided to order a set to compare them to my official ones.
This article will look at the girls – Rei Ayanami and Asuka Langley. Shinji and Kaworu will be covered in a later article.

The officials I bought from Mandarake (unopened).

These bootlegs didn’t have the option of a box, and arrived in sealed bags: 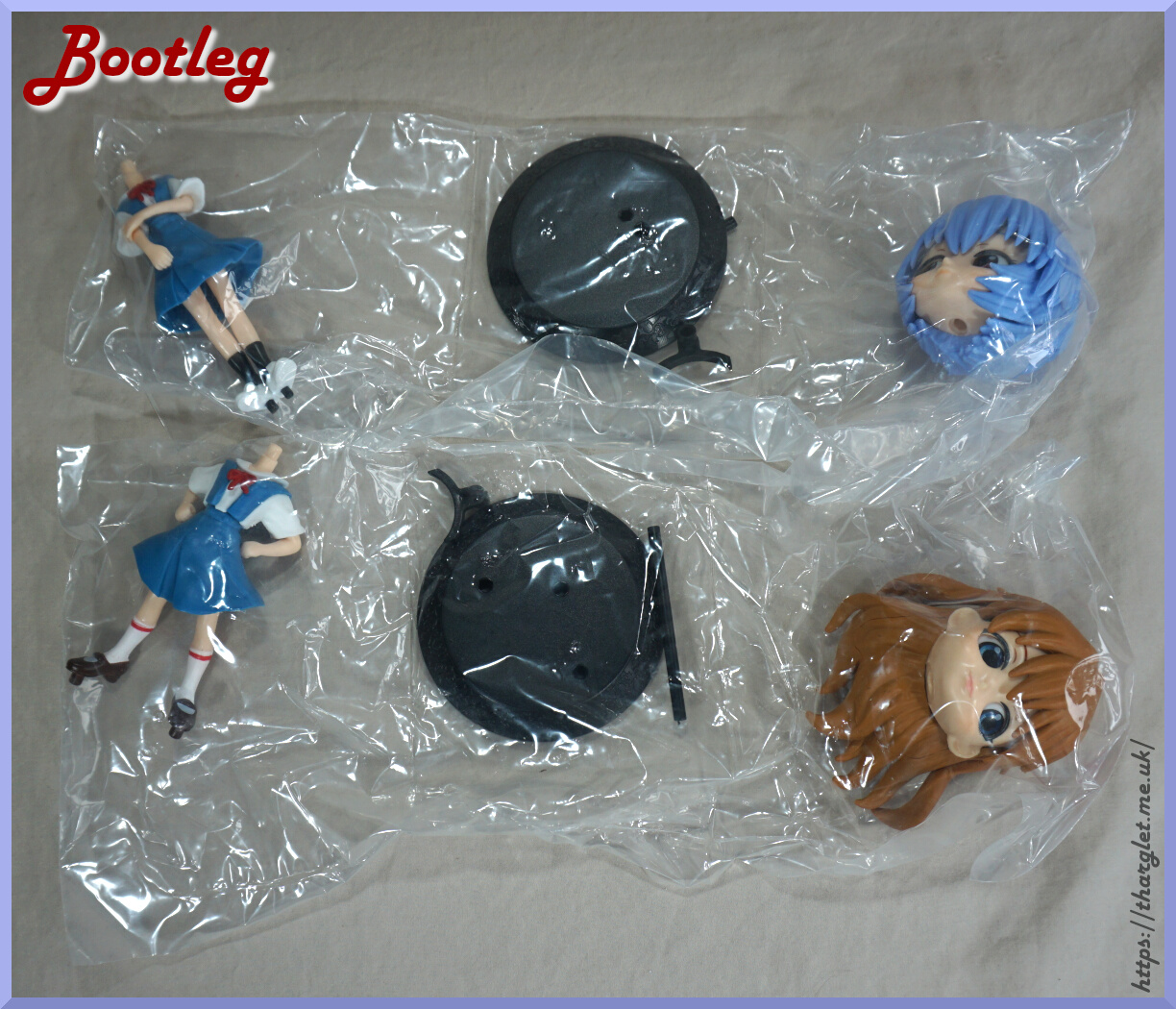 The officials come in very similar bags – only the bags are in a box! 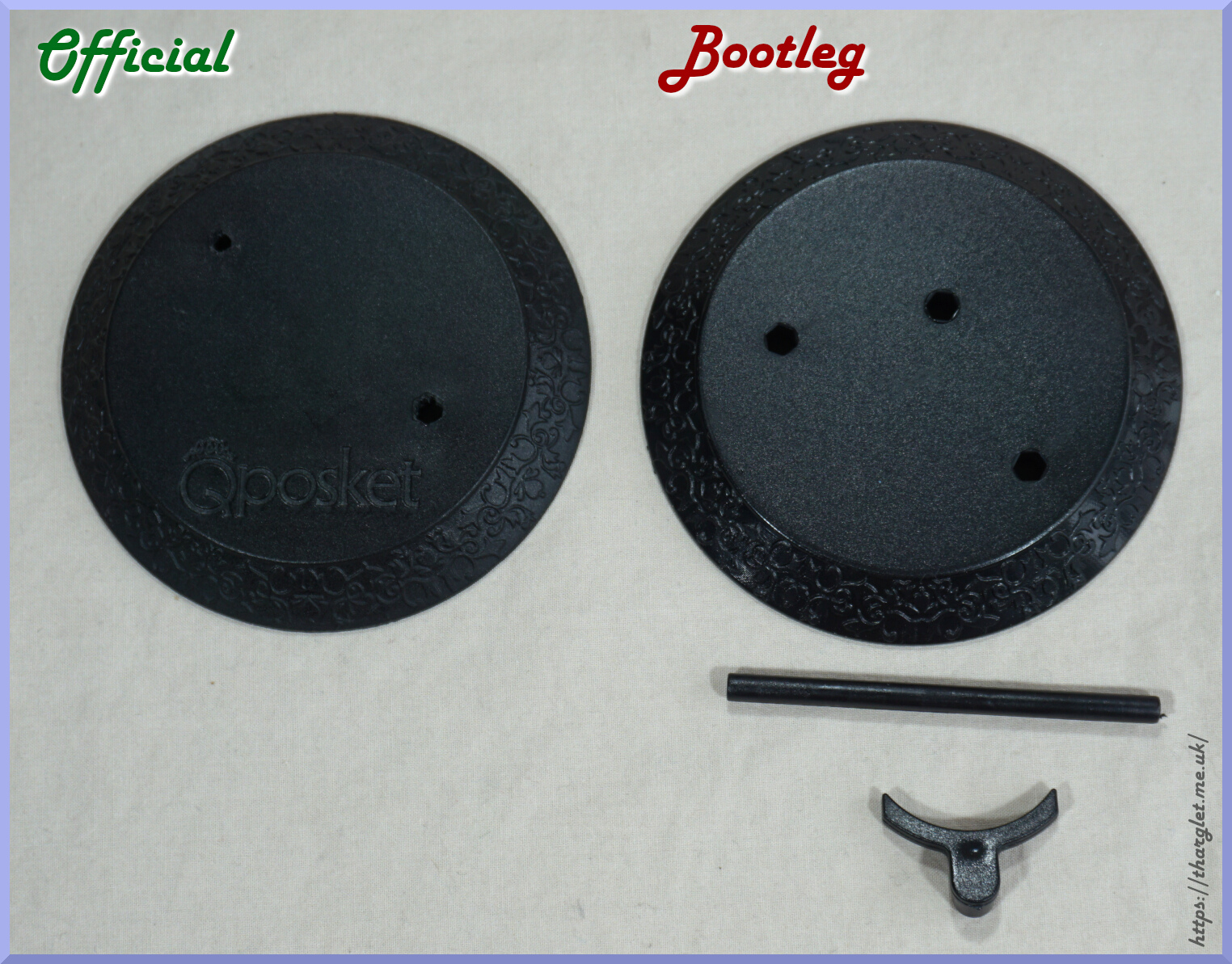 The first thing that stands out is that the bootleg base comes with more parts – it comes with a support pole that the official doesn’t have and an extra hole in the flat part of the base to accommodate it.
With the base itself, the bootleg doesn’t have the “Q Posket” logo and the feet peg holes are moved forward seeing as there’s no logo to get in the way. The edging of the base has been replicated, but the plastic is noticeably darker on the bootleg.

Bottom of the base: 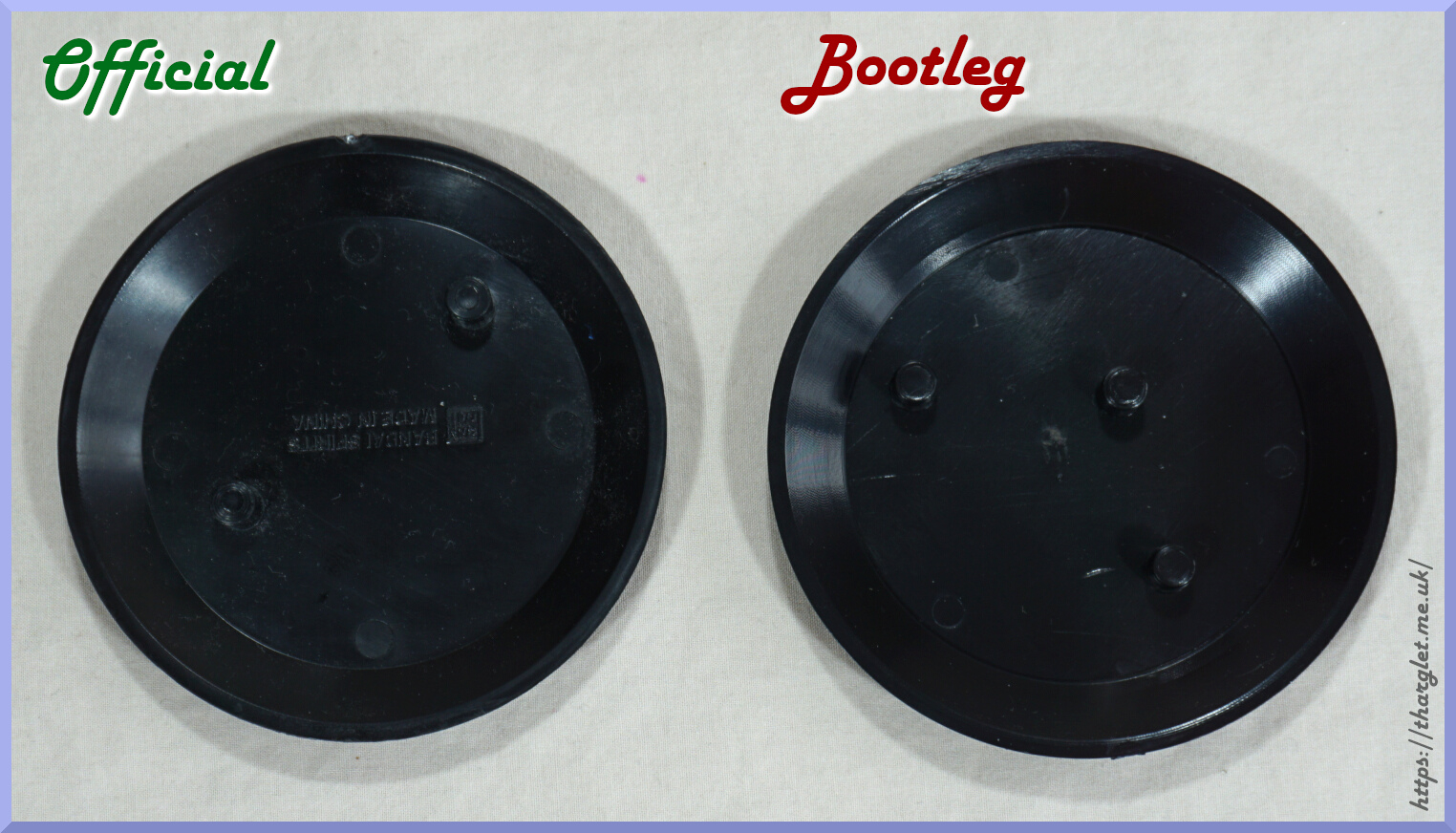 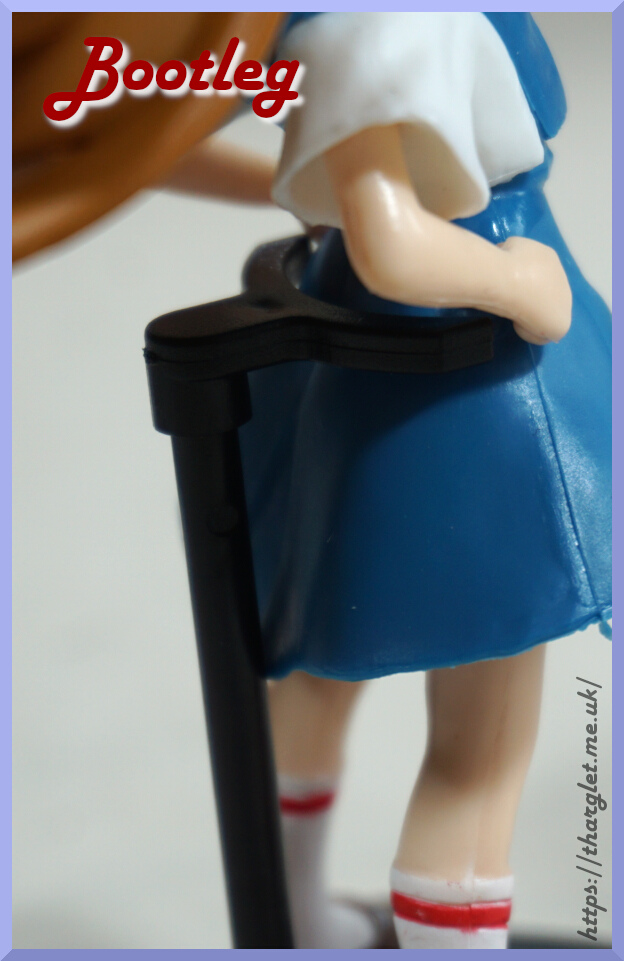 Well, it sort of does something. It doesn’t grip the figure tightly, but will stop her from leaning backwards, should she choose to do so. 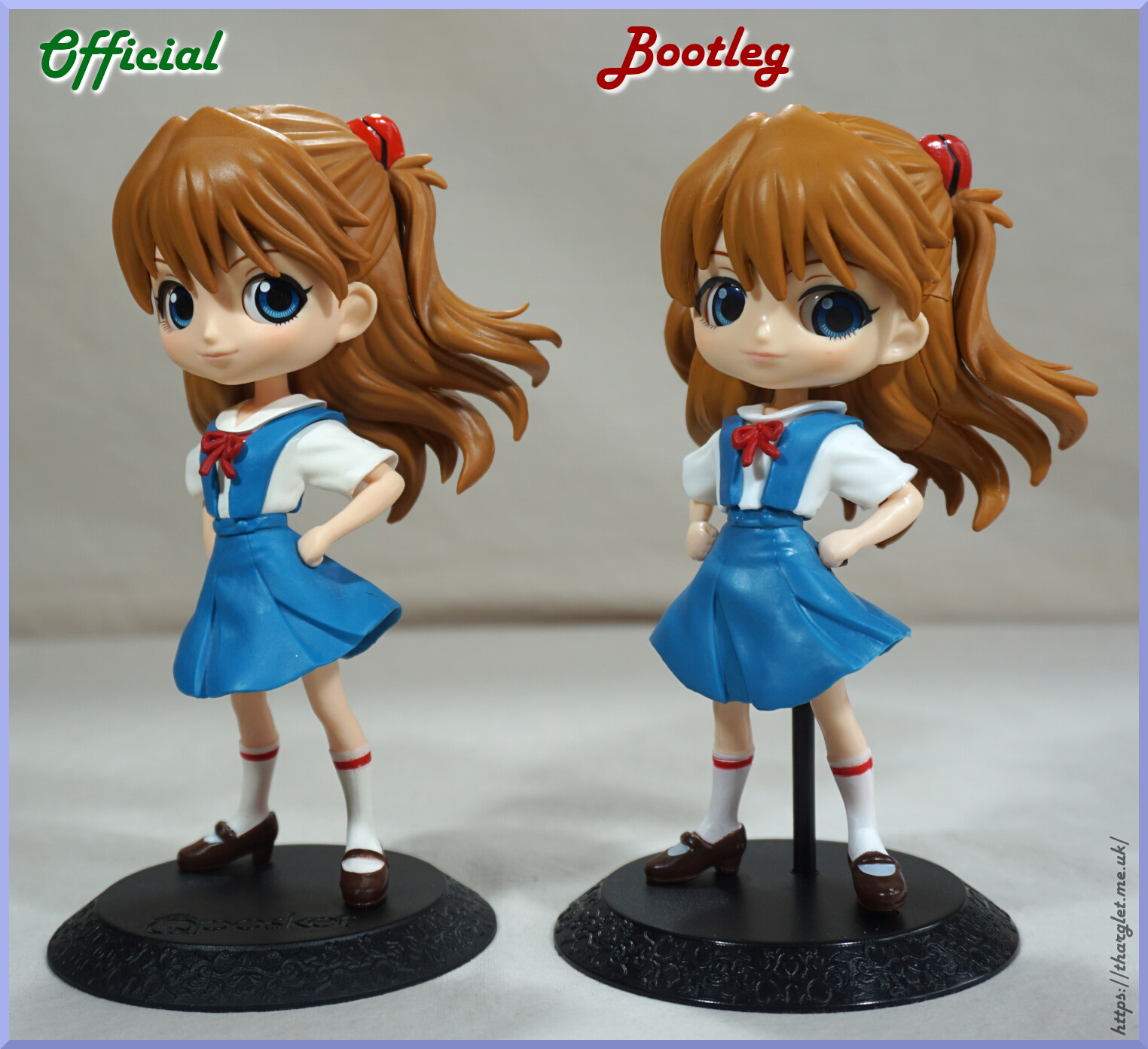 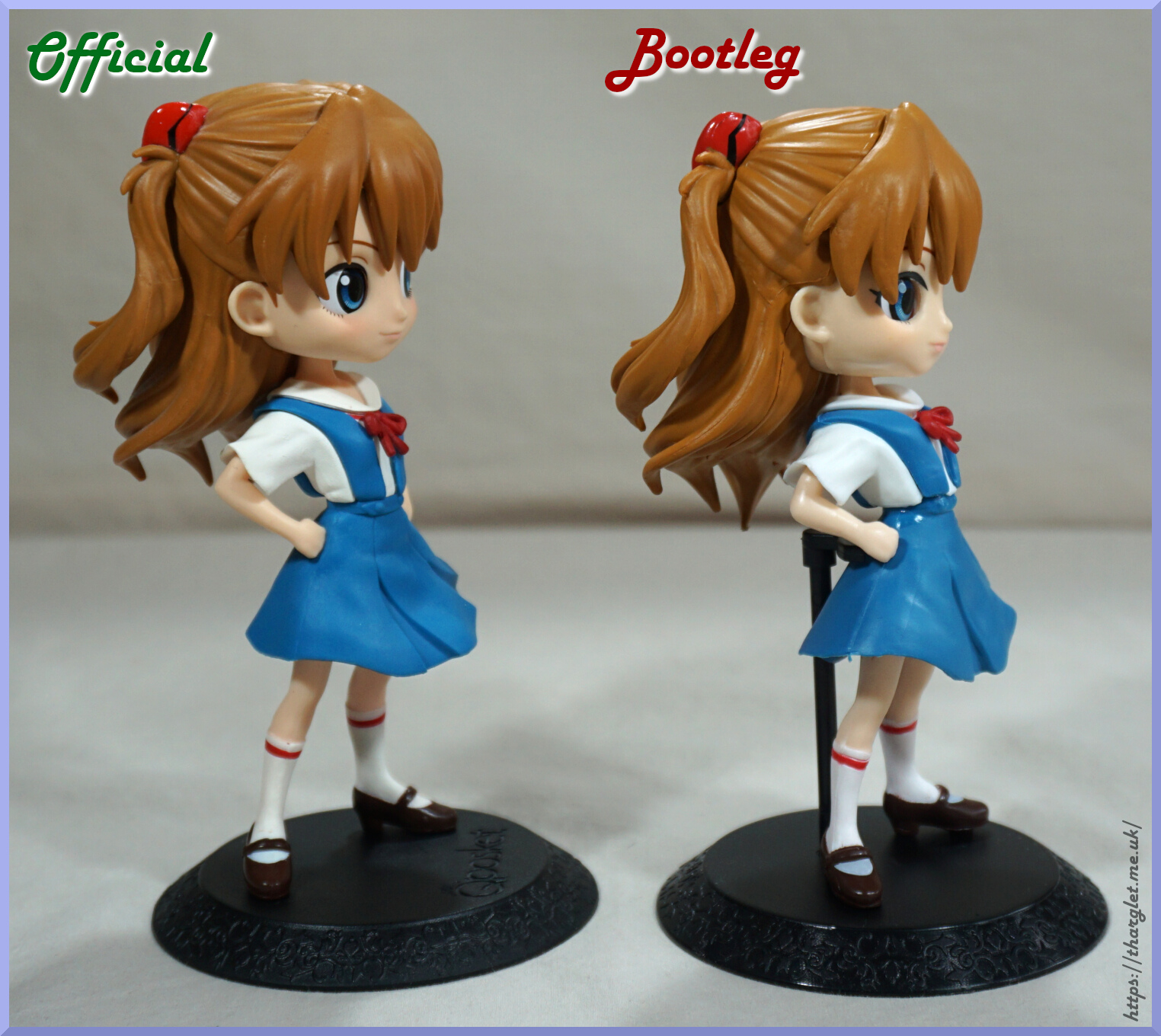 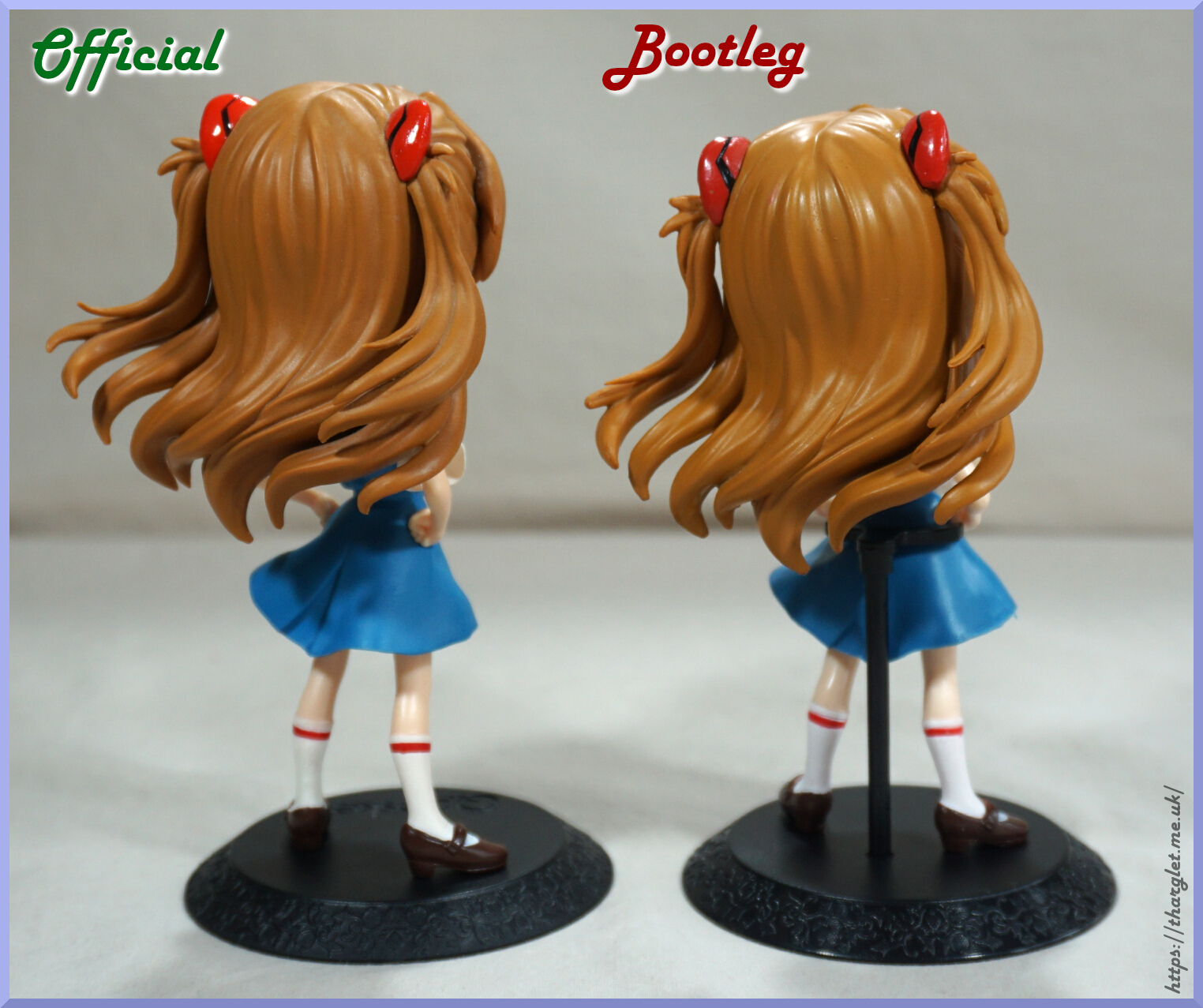 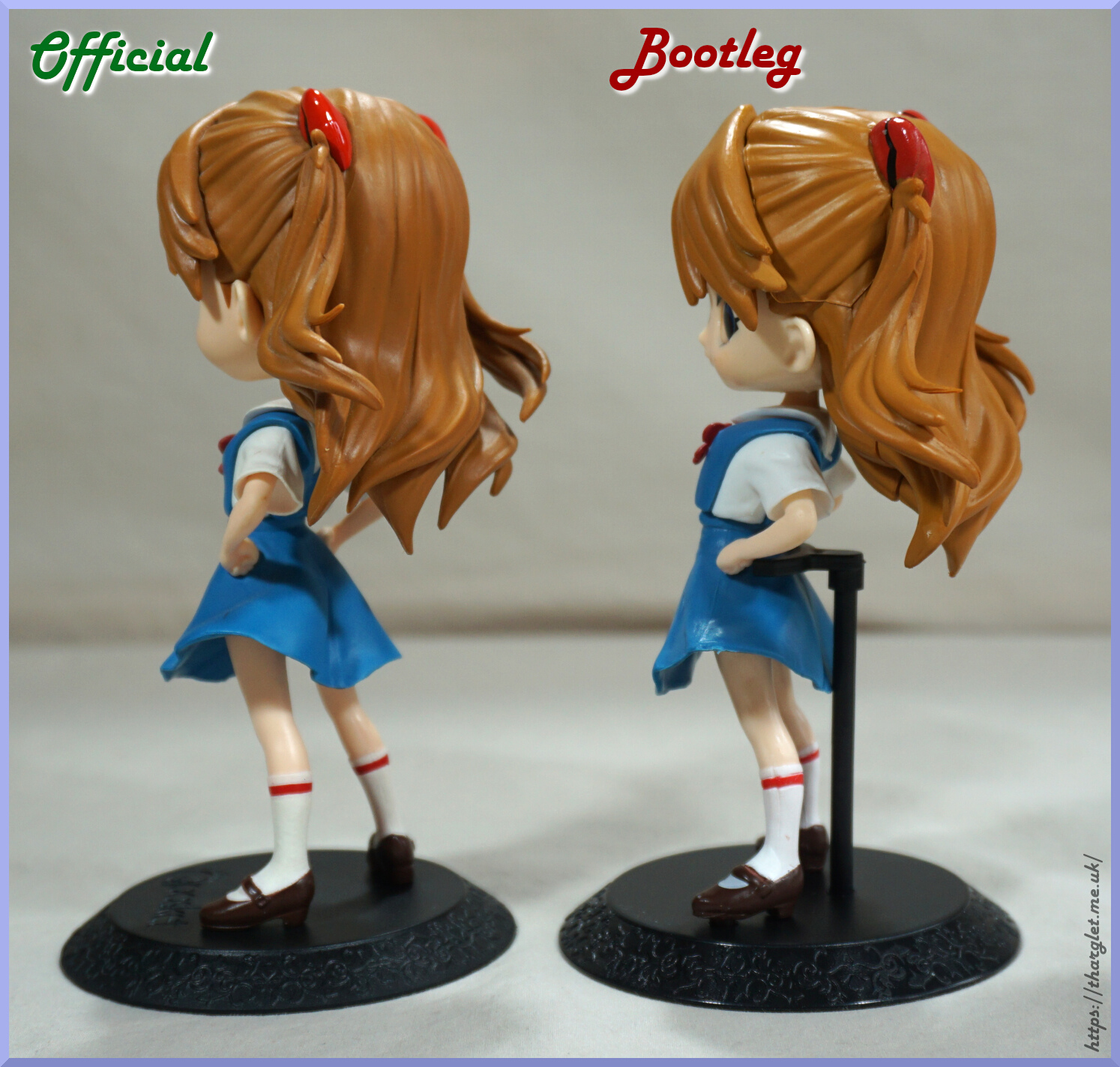 Looking reasonably similar – the extra pole on the bootleg stands out, plus her top is looking a bit like a life jacket. We’re also definitely seeing some extra shininess on the bootleg’s skin. 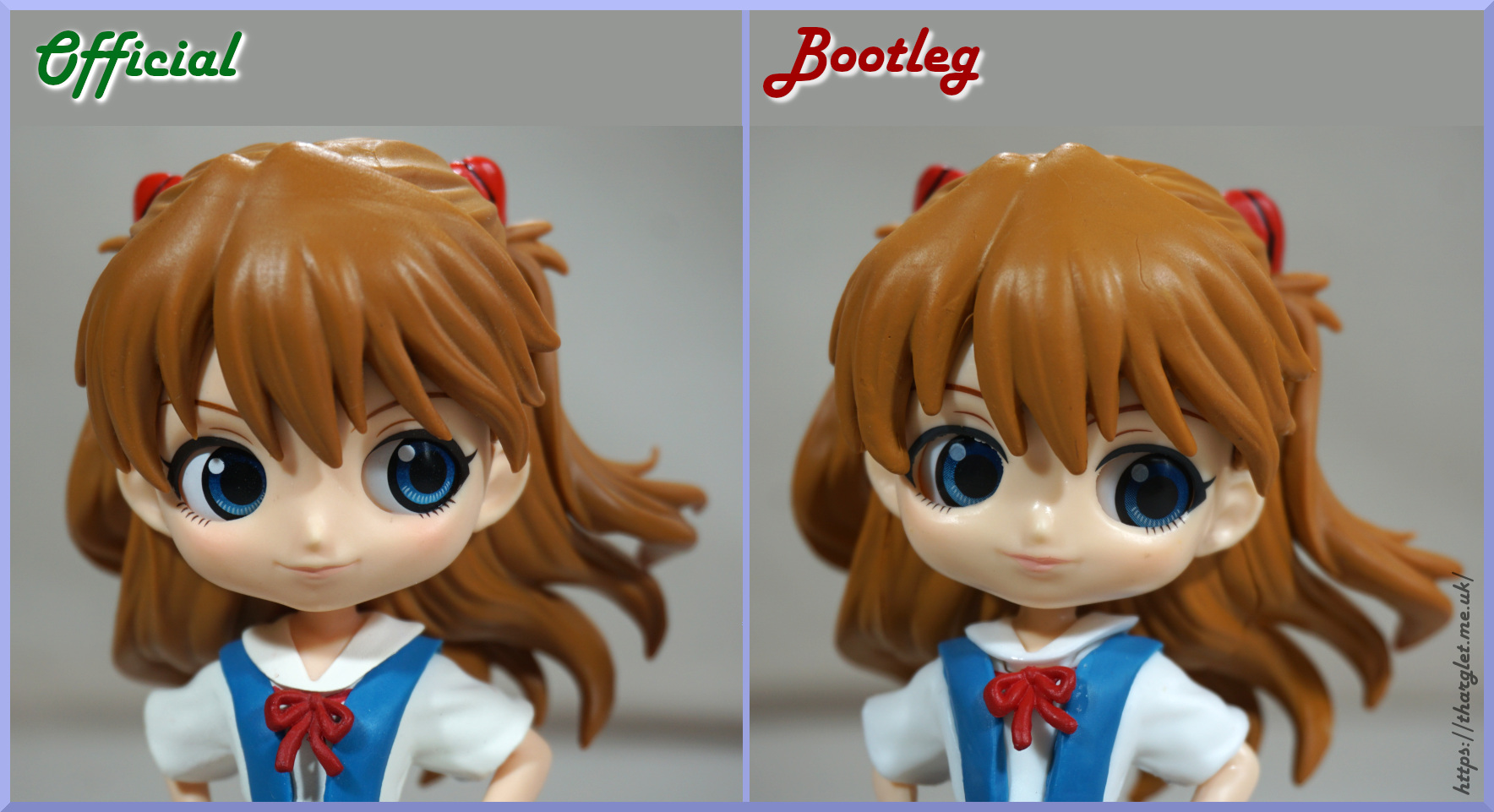 Eesh, those bootleg eyes… The bootleg’s eyes don’t seem to have been installed correctly and her right eye seems to be quite sunken into her head giving her a creepy look. The print isn’t as crisp on the bootleg’s eyes either, making them look more dull.
The bootleg’s hair is a shade or two lighter and has chubbier ends. The face has been done pretty similarly, though the blush doesn’t show up as well on the shiny plastic. Looking at her neck, the bootleg’s collar is much higher up than the official’s and the bow is more lumpy.

Back of the hair: 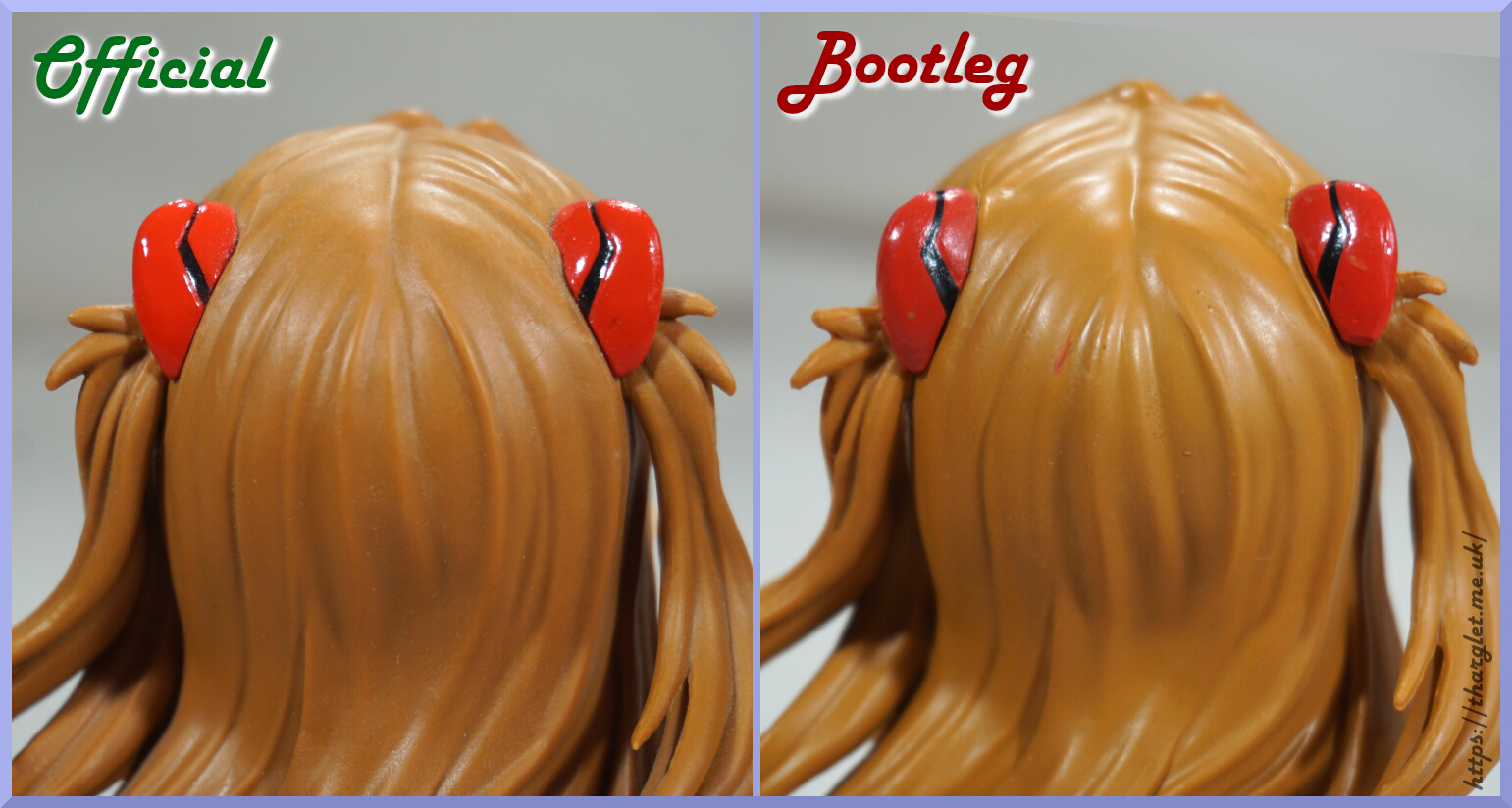 The bootleg’s hair is noticeably shinier and features some stray red paint.
The interface headset parts (red hair clips) are less shiny on the bootleg, and the painting isn’t as neat. The one on the right also has a bit “munched” off the end of it.

The black band noticeably has less refinement on the bootleg – it remains close to the same thickness throughout, instead of thinning out as it should. On the top of the bootleg interface headset part, we have some excess plastic.
Looking towards the bottom/back of the part, the paint on the bootleg doesn’t get to the bottom of it – it appears the interface and her ponytail were made into one piece, instead of the two that appear on the official.
Looking to her hair, the bootleg has a flaw in the plastic next to the interface headset part, plus some visible seaming towards the top of her head.

Side of her hair: 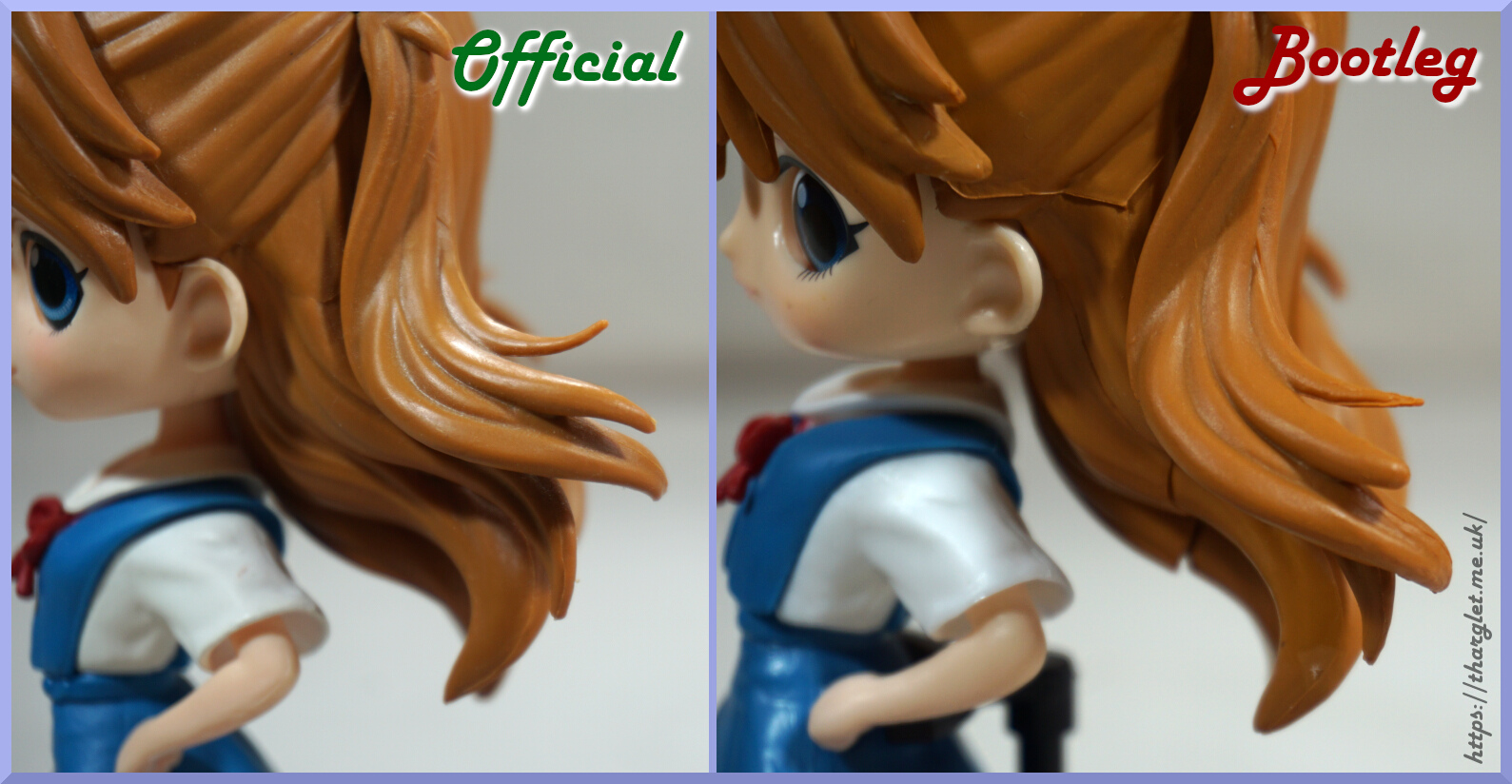 The bootleg hair is a field of seamlines and gaps – we have a big seamline just above her ear and the ends of her hair aren’t attached properly at the bottom. The official only has a bit of seamline visible here – just under her ponytail and by her ear. Whilst we’re looking at the ear, there’s a bit of hair missing on the bootleg – the official has a triangular piece next to her ear, but this is entirely missing on the bootleg.
We can also admire the chonky hair ends of the bootleg here again.

Underside of the bootleg’s hair: 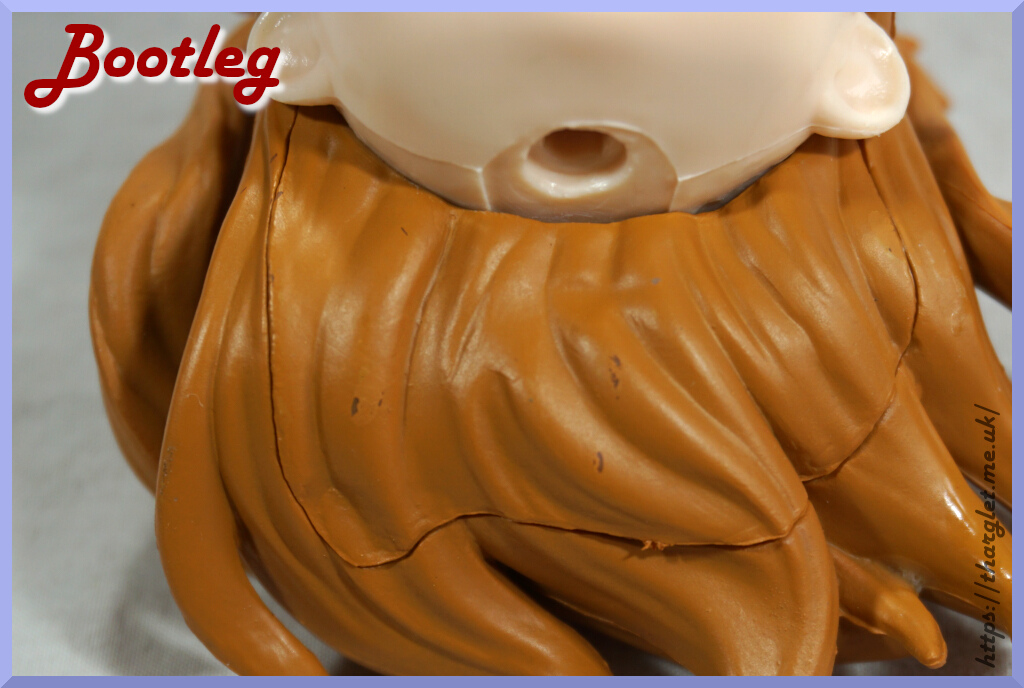 Urgh, such a mess under here – scratches in the paint and no concealment of the joint. 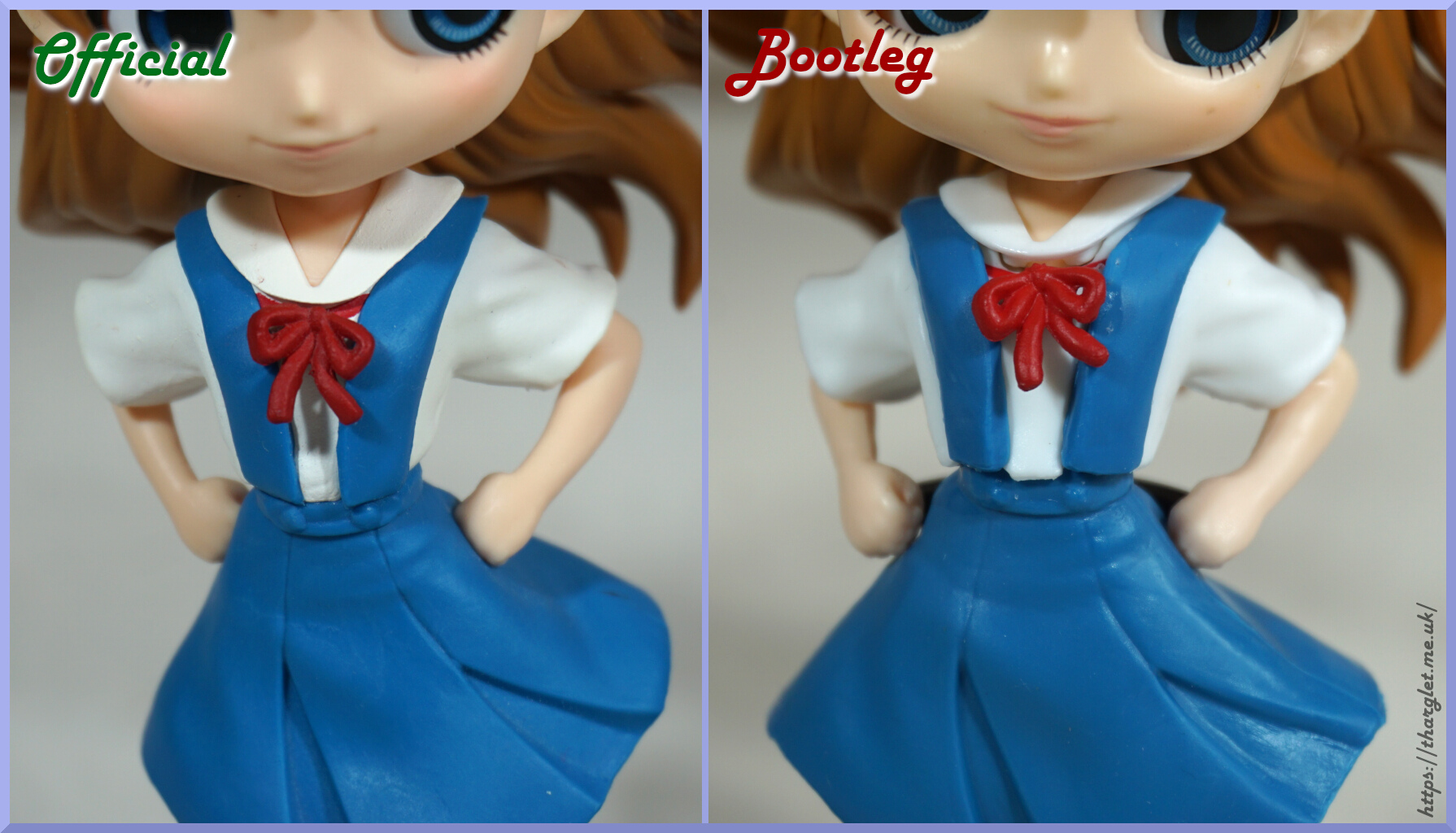 The bootleg is very much an assembly fail when it comes to her dress. The upper parts of her dress aren’t inserted into the shirt, making them very chunky, and the collar is popped up, with the bow getting in the way of proper assembly. The shirt itself is also sticking out in places it shouldn’t, completing the odd look of her clothing.
With the clothing itself, the bootleg’s is overly shiny which isn’t a normal feature of Japanese school clothing.

Whilst this isn’t a viewing angle, this shows just why the bootleg’s upper half is such a mess – the upper dress parts haven’t been moulded well at all, so they don’t fit with the shirt parts properly. We’ve also got a shirt part which I assume is supposed to be tucked under the belt to hold it into place.
Does feel like the person assembling it had an impossible challenge and did the best they could with the pieces they had. Which unfortunately led to this mess.

Side of the dress: 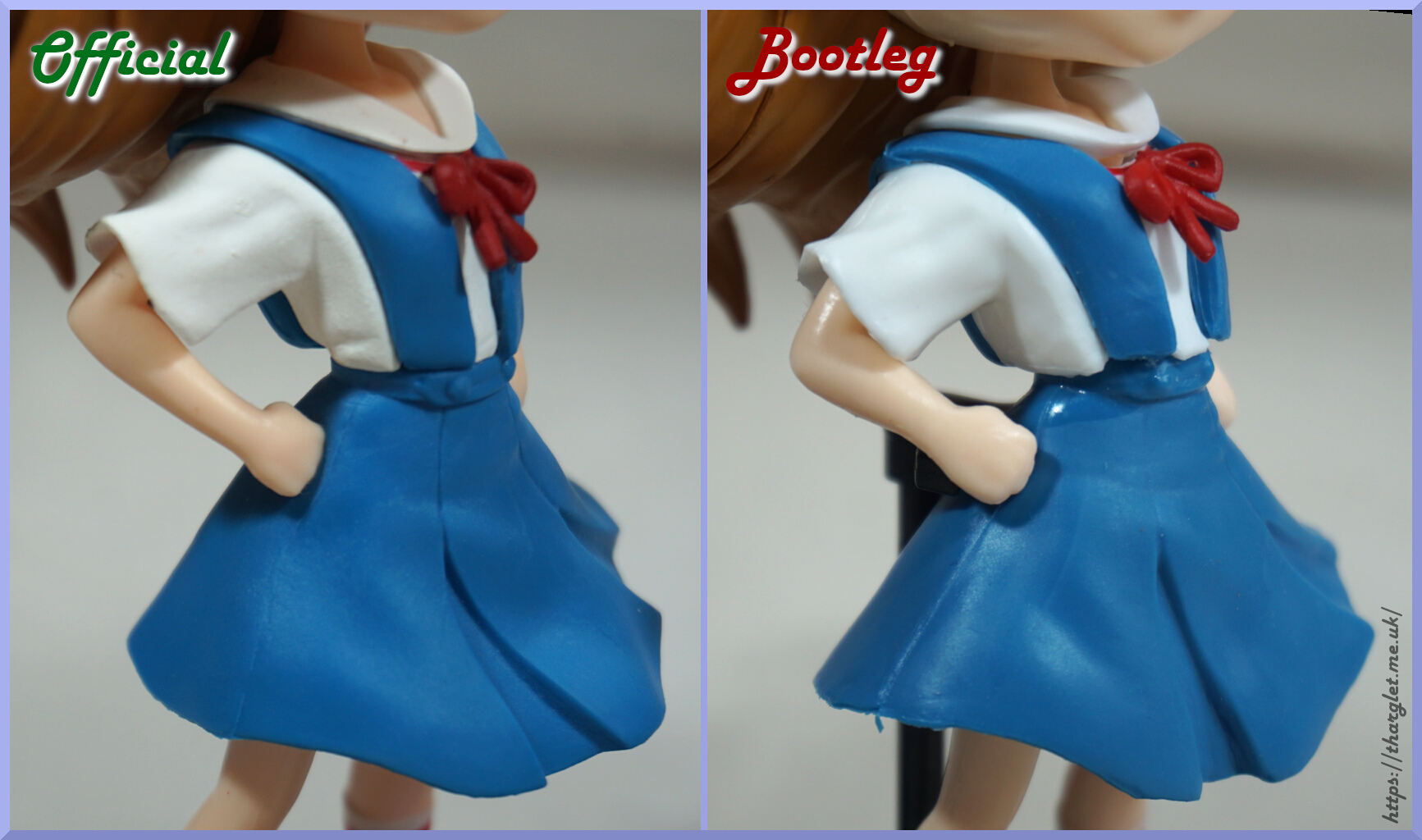 Mmm, the bootleg starts off strong with sweaty, shiny skin and some escaped glue on her dress.
The official’s paint is a bit rough on the sleeve, but other than that, looking pretty decent. I don’t think the slight complexity of the top assembly did this figure many favours, as the official is looking slightly odd at the bottom as well… but doesn’t have a patch on the bootleg.
OK… bootleg time… the shirt. The material and texture are poor – it looks like she’s wearing icing rather than a shirt. On top of the icing, we have her “life jacket” – from the side it really does look like a life jacket rather than a dress to me. Here the parts really do not marry up well at all, making them all look very separate from her skirt.
The skirt seam isn’t very well hidden on the bootleg, and we have some plastic flaking off. The dress has been flattened a bit at the front, which doesn’t make it flow quite as well. Stupidly, the intended seams at the top of her skirt at the front are less visible on the bootleg… if only they could do that for the actual seam.

The sock paint is overly white on the bootleg and the bands aren’t painted very well either.
The shoes are pretty much on a par with the official’s though the paint isn’t quite the right colour for them. The moulding of the straps hasn’t gone well on the bootleg though, leaving them looking a bit bobbly.

As per usual, the official pegs are not painted, but the bootleg’s are, making them harder to peg into the base. Though with the painted pegs, it does show less if Asuka’s foot pegs aren’t quite into the base. 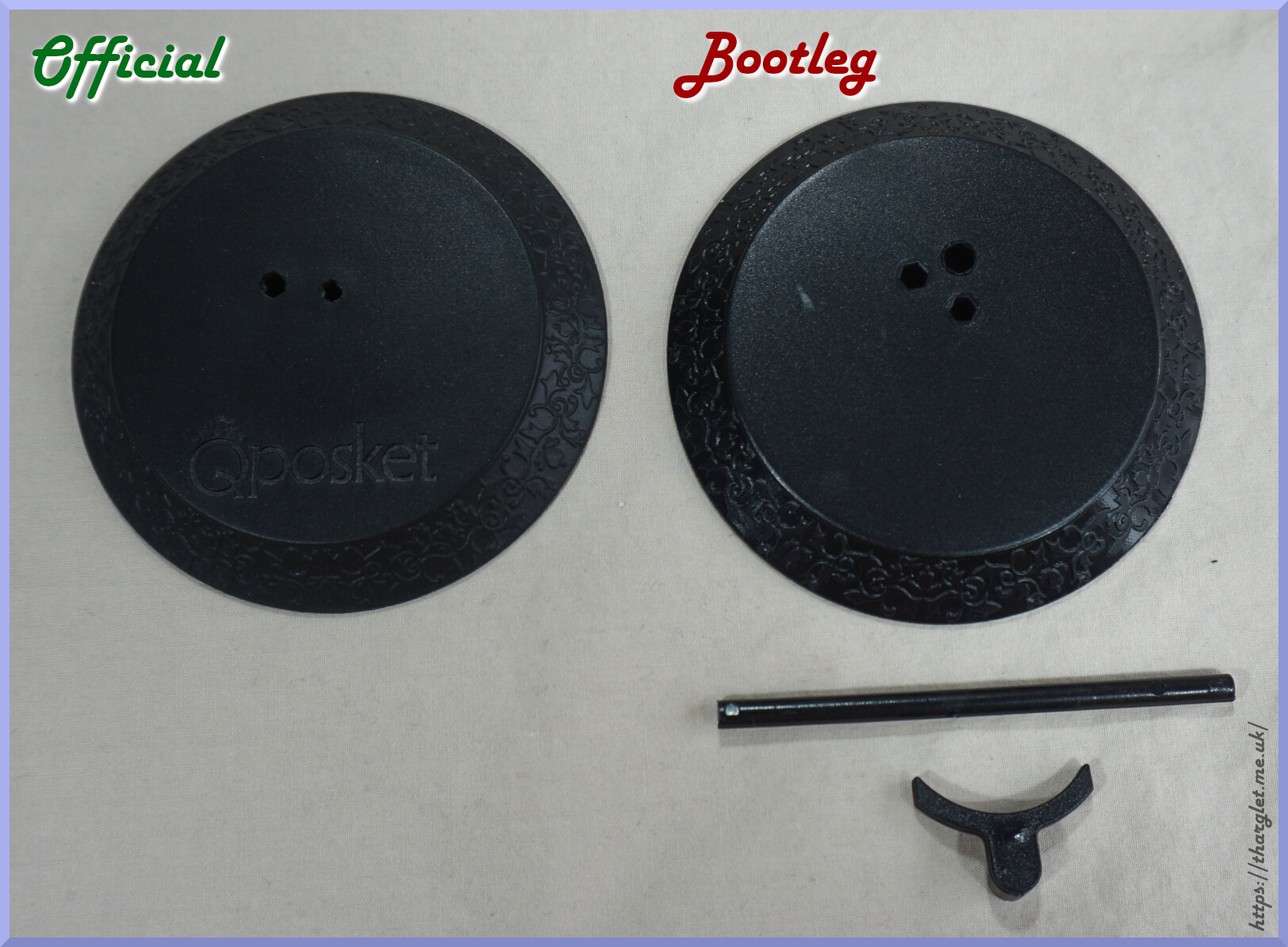 The bootleg base features a bonus hole and a lack of logo. We’ve also got the overly dark black colouring present too. 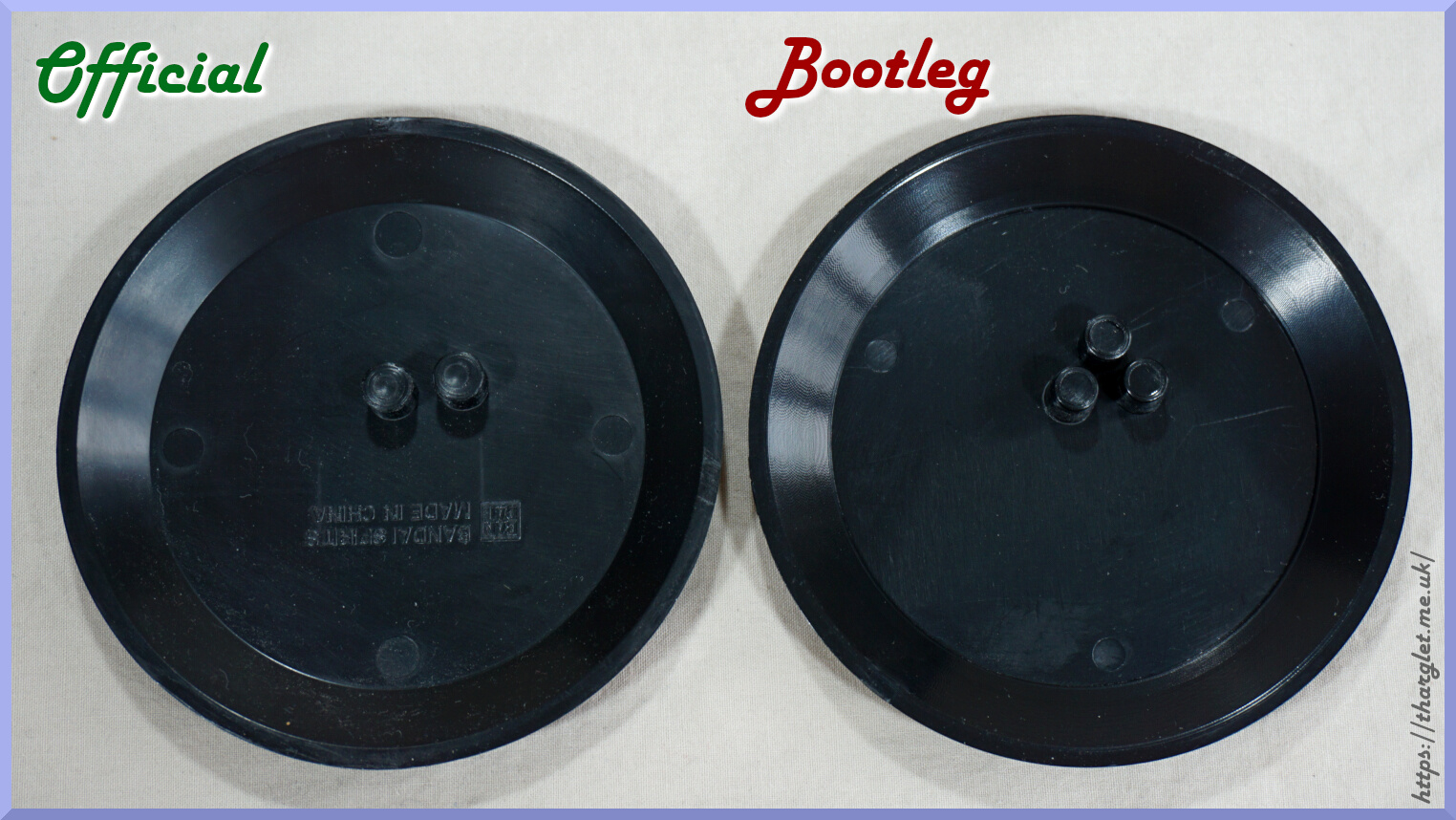 Has the same design differences as Asuka’s – with the lack of logo and differing peg holders. 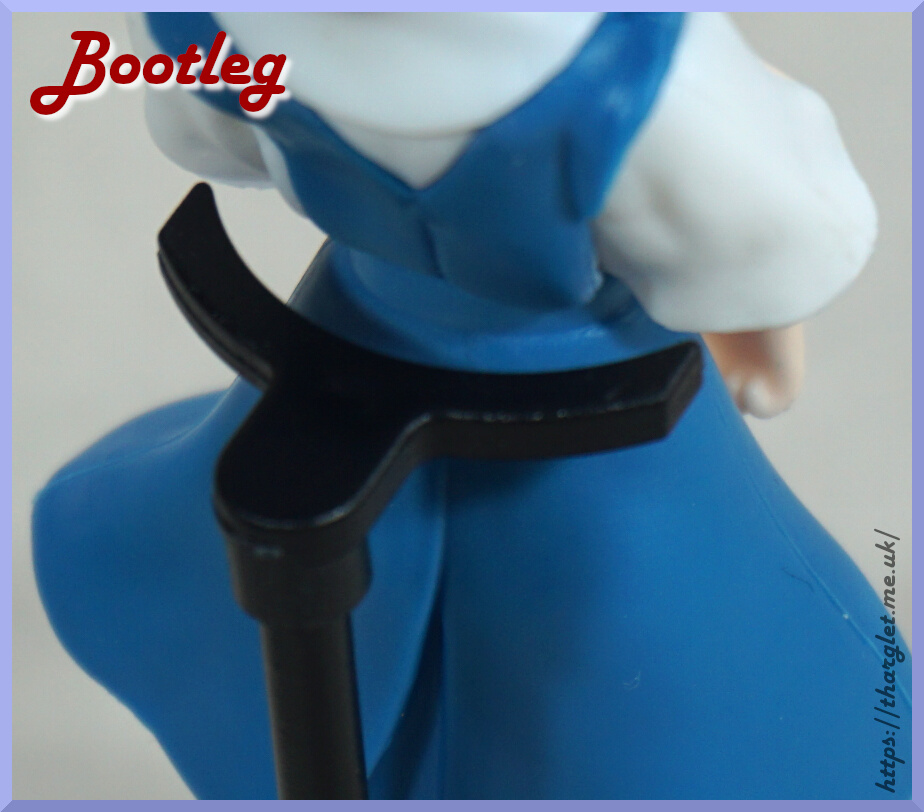 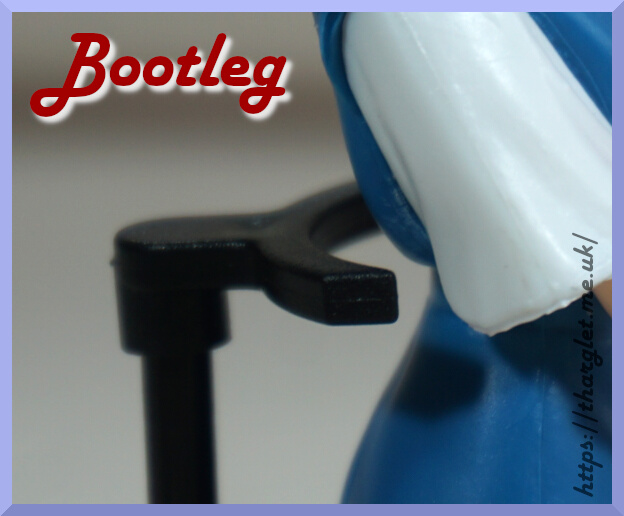 Oh. The stand doesn’t even touch Rei – this thing was definitely not made for this figure, and doesn’t actually serve any kind of purpose. Bonus plastic yay? 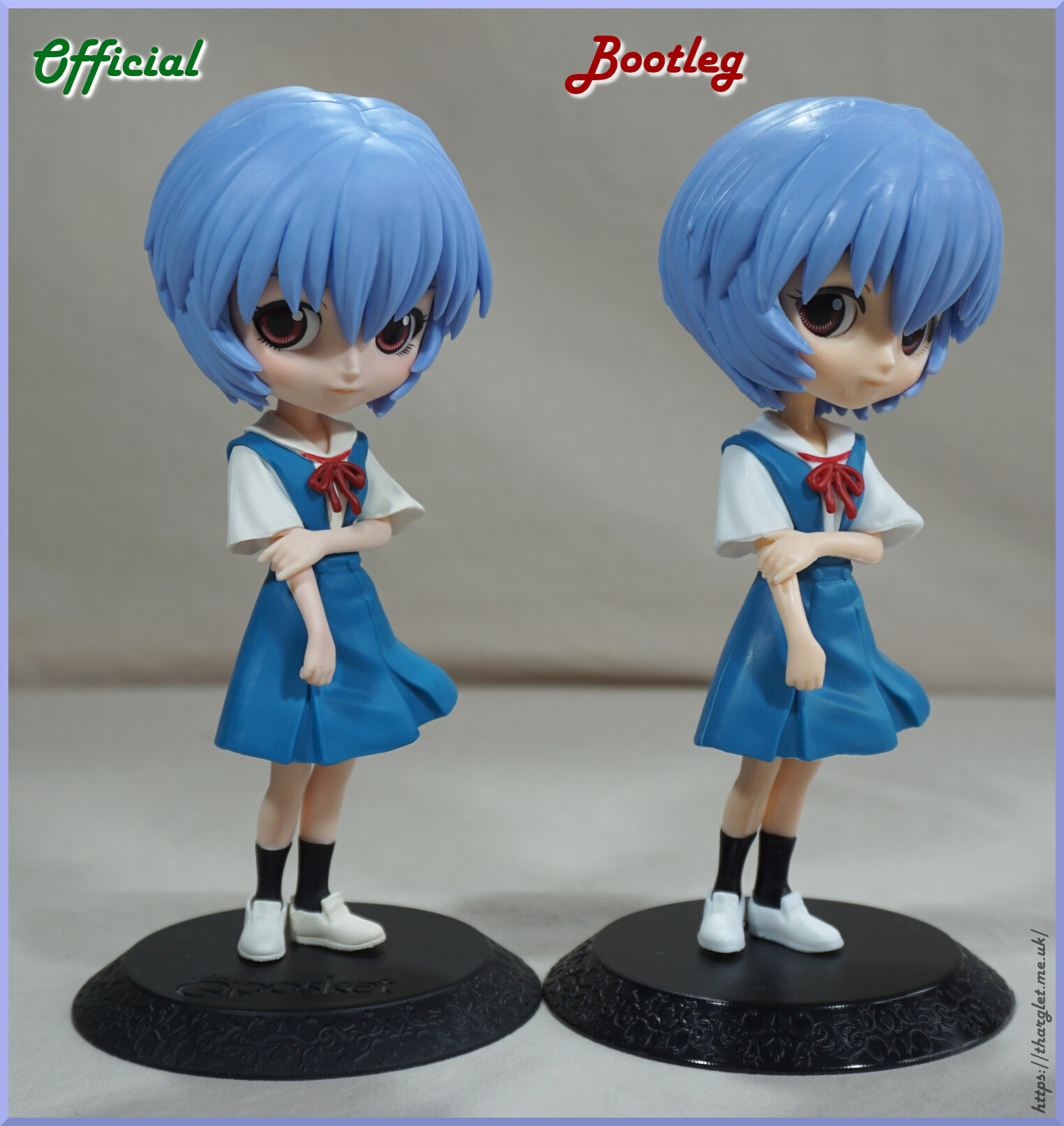 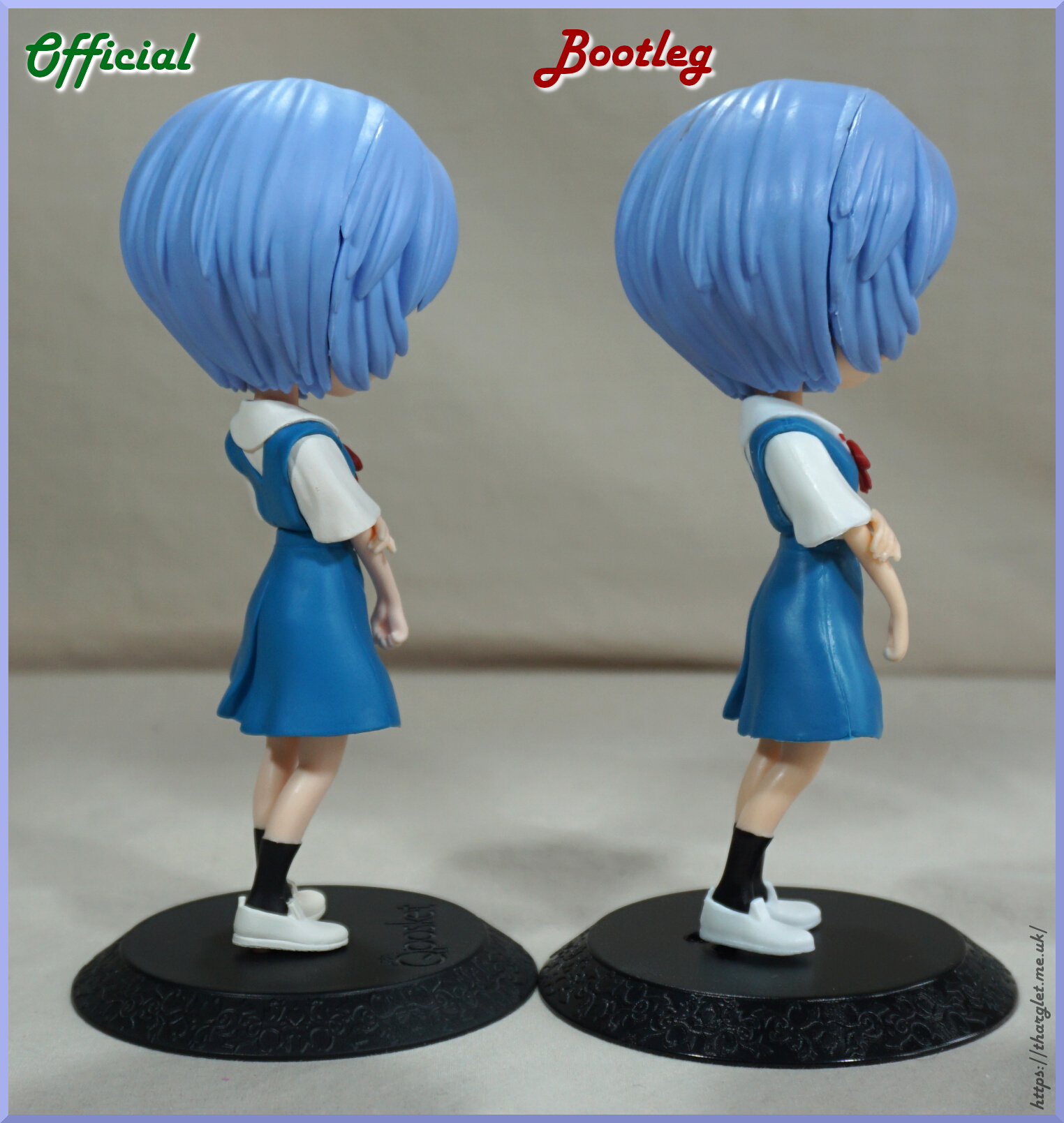 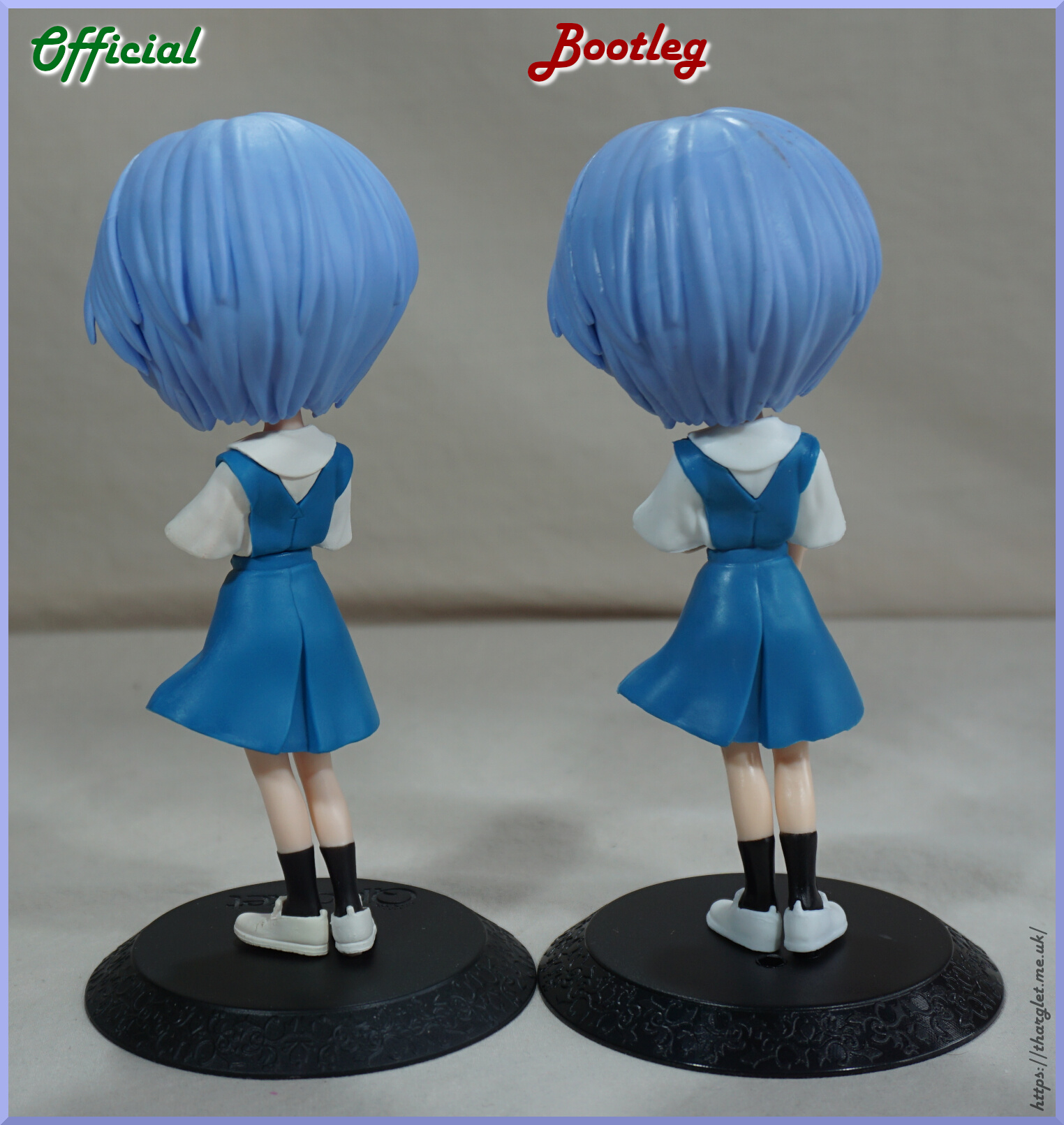 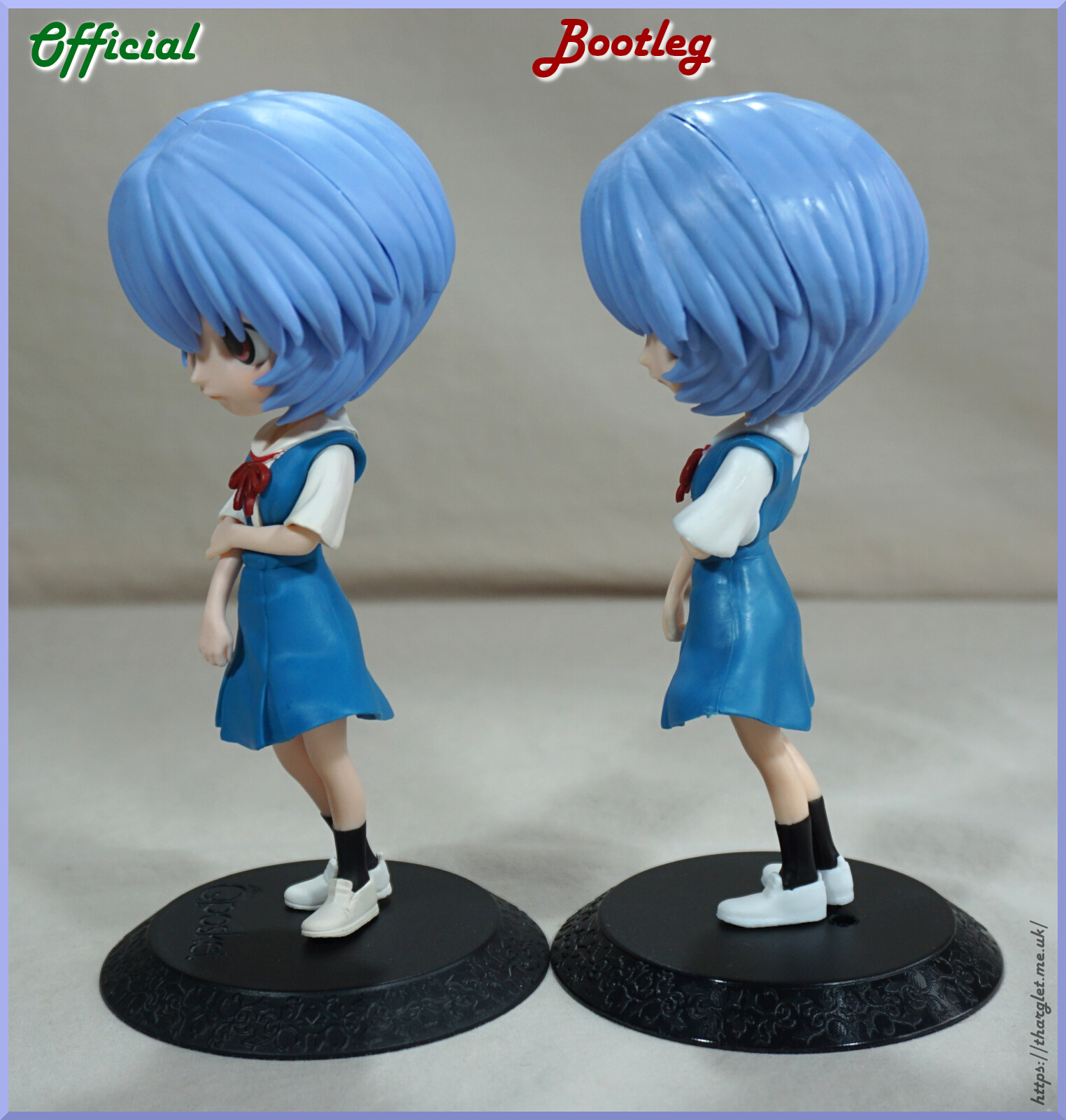 Bootleg Rei is looking like a more shiny version of her official self. 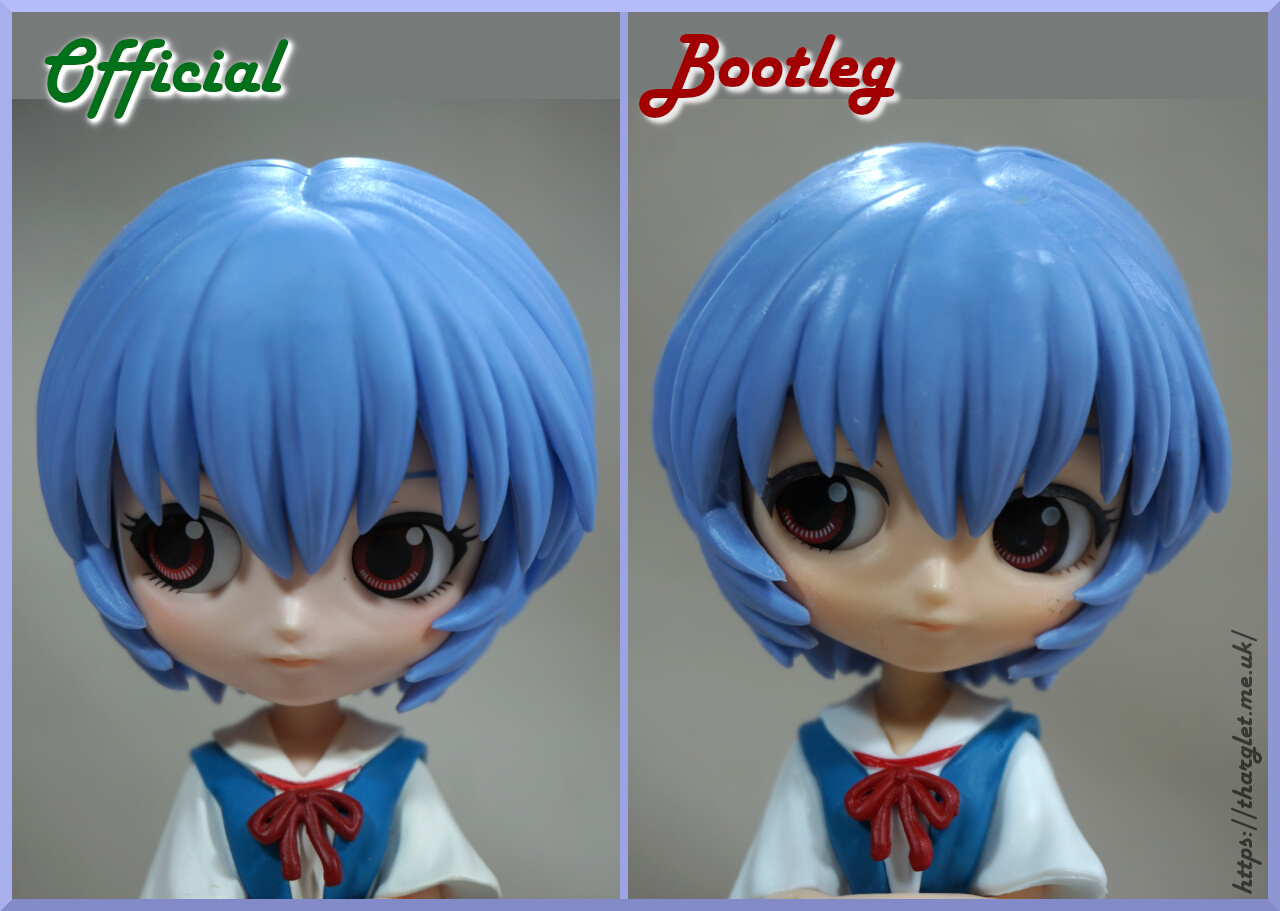 Mmm, shiny – the bootleg’s hair definitely has a noticeable shine to it. The bootleg’s hair tips have managed to retain most of their pointiness – a rarity.
The eyes are a lot less scary too but have the same low quality print as Asuka’s. The white shine and the red parts of her eyes are less distinct on the bootleg.
The face skin is a few shades darker on the bootleg, which isn’t right for Rei.
Looking to her bow, the bootleg’s is a bit blobby, but better than the Asuka bootleg’s.

From this angle, the shininess is very apparent on the bootleg. The main head seam is a bit messier on the bootleg, but both it is very noticeable. Not too much difference apart from the finish. 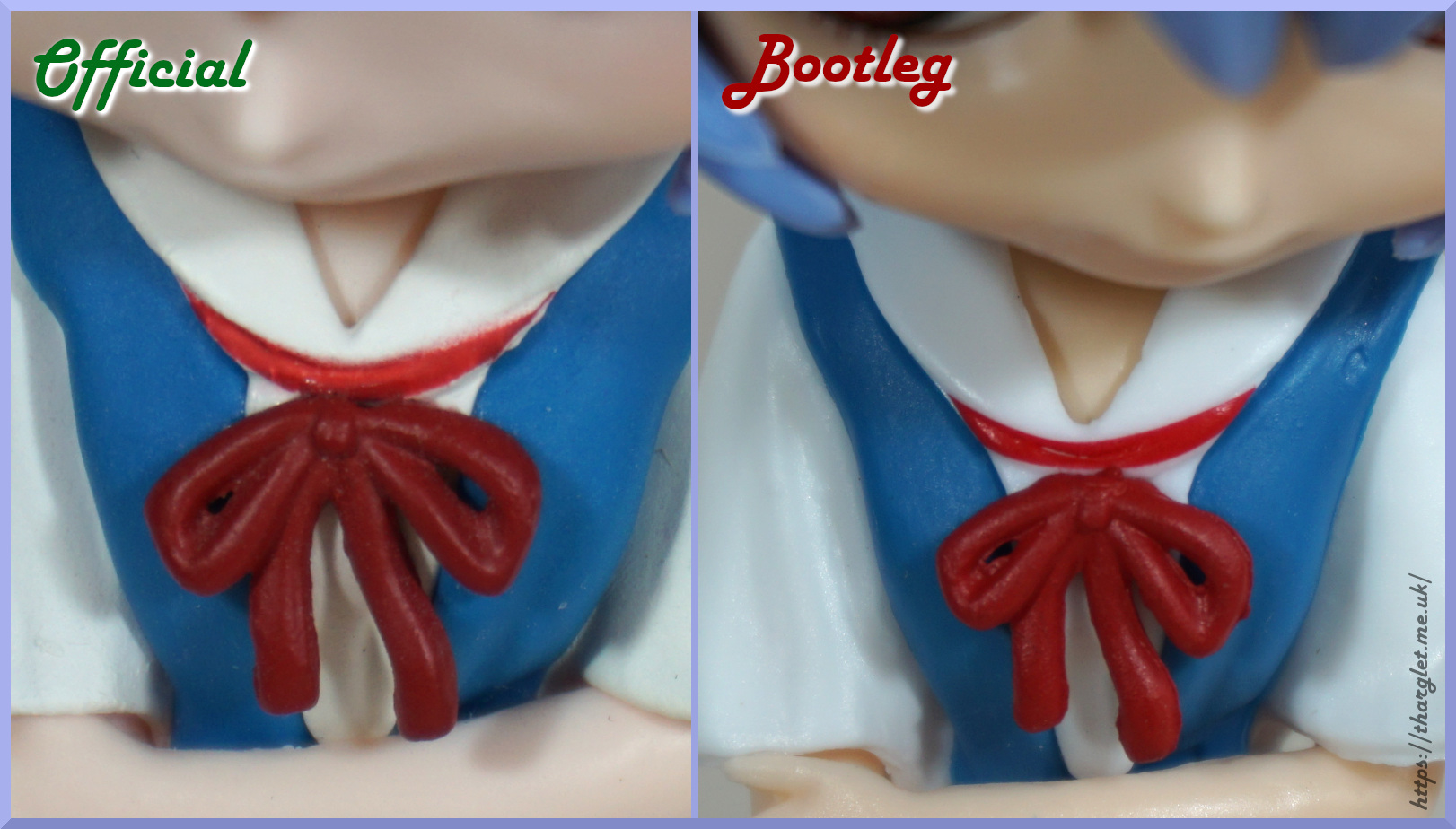 The ribbon isn’t massively different from the official – looks a little sadder and a little redder. Meanwhile I’m being distracted by the bootleg’s shirt that’s looking more like icing.

I had some troubles with assembling the bootleg – the distorted, misshapen peg it has shows why.
The top of the bootleg’s dress is a lot better than Asuka’s and doesn’t have the “life jacket” look. The shirt is still too thick and looks like icing, but at least this one was able to be assembled correctly. 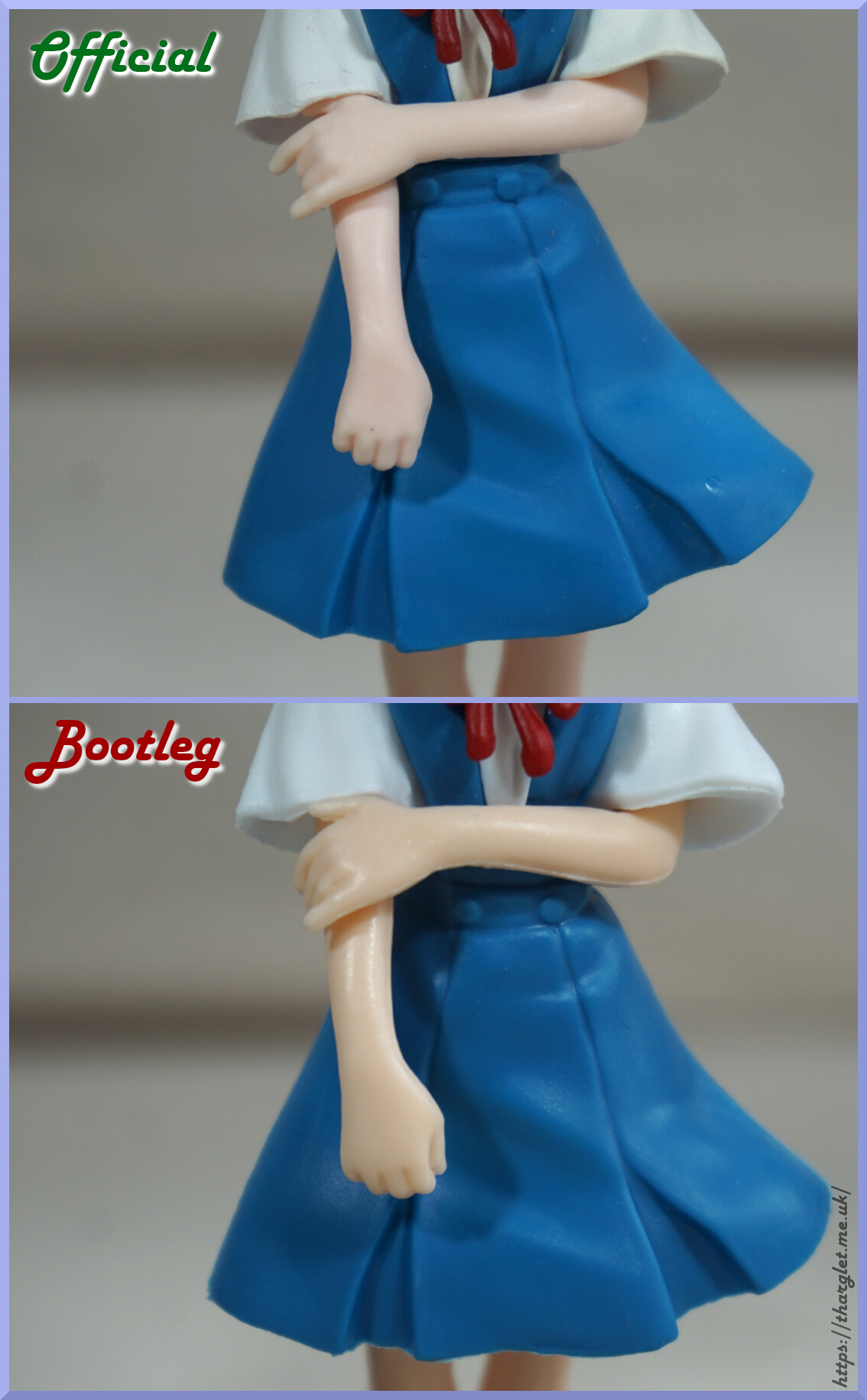 The bootleg’s arms are noticeably shiny and have a fair amount of excess plastic. The shirt sleeves also have excess to go with their thickness.
The skirt is mostly a decent copy, but again, lacks finishing at the bottom of it. 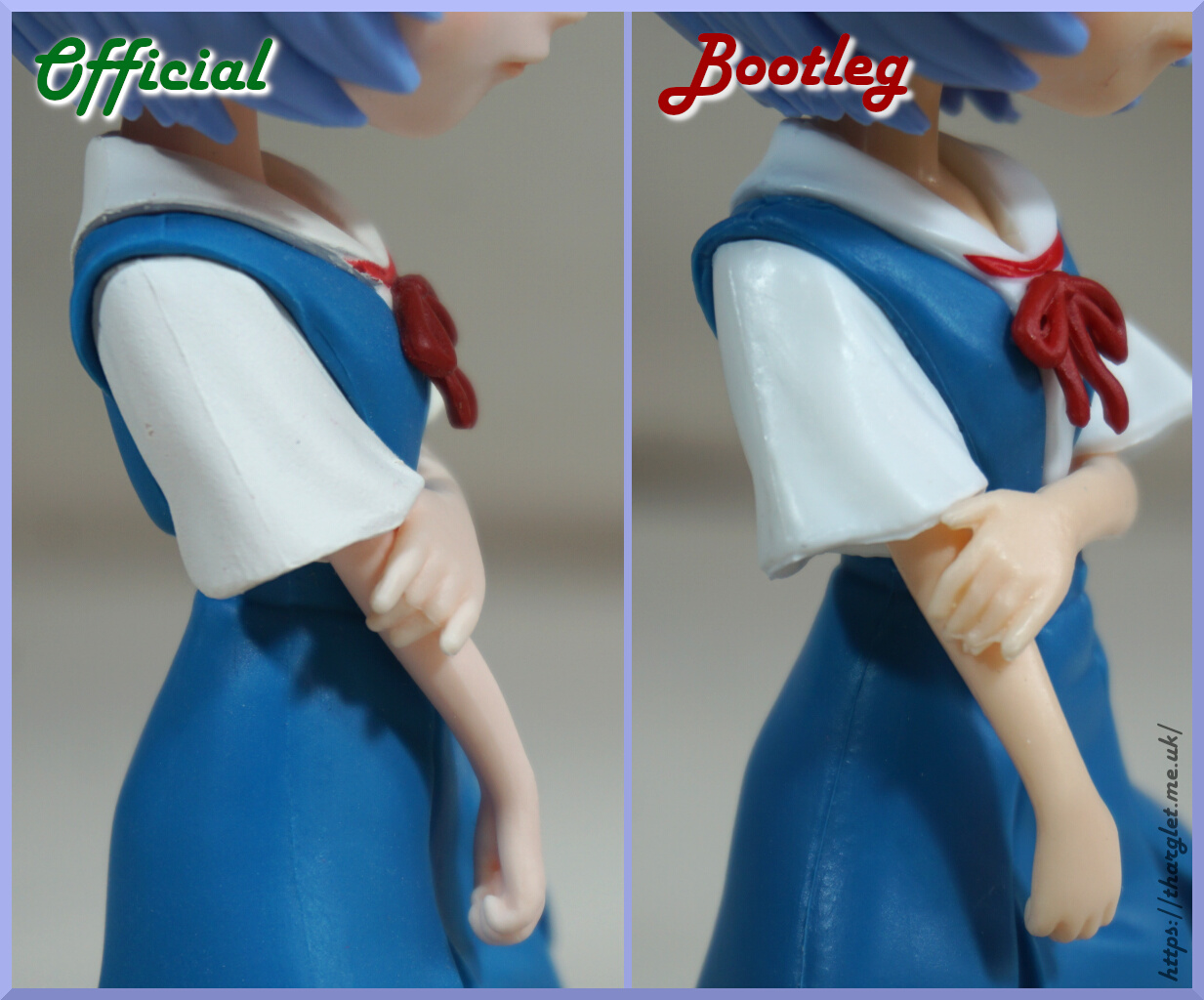 Here we have some seaming on the official – on her fingers and her sleeve. Whilst the bootleg seemingly lacks the finger seam, it makes up for it with webbing between her fingers ><.
The bootleg’s arm poses don’t match the official, but doesn’t massively change the figure.
The shape of the bootleg’s dress pieces is better than bootleg Asuka’s, but some of the detail has been lost from the official – most notably around her shoulder. 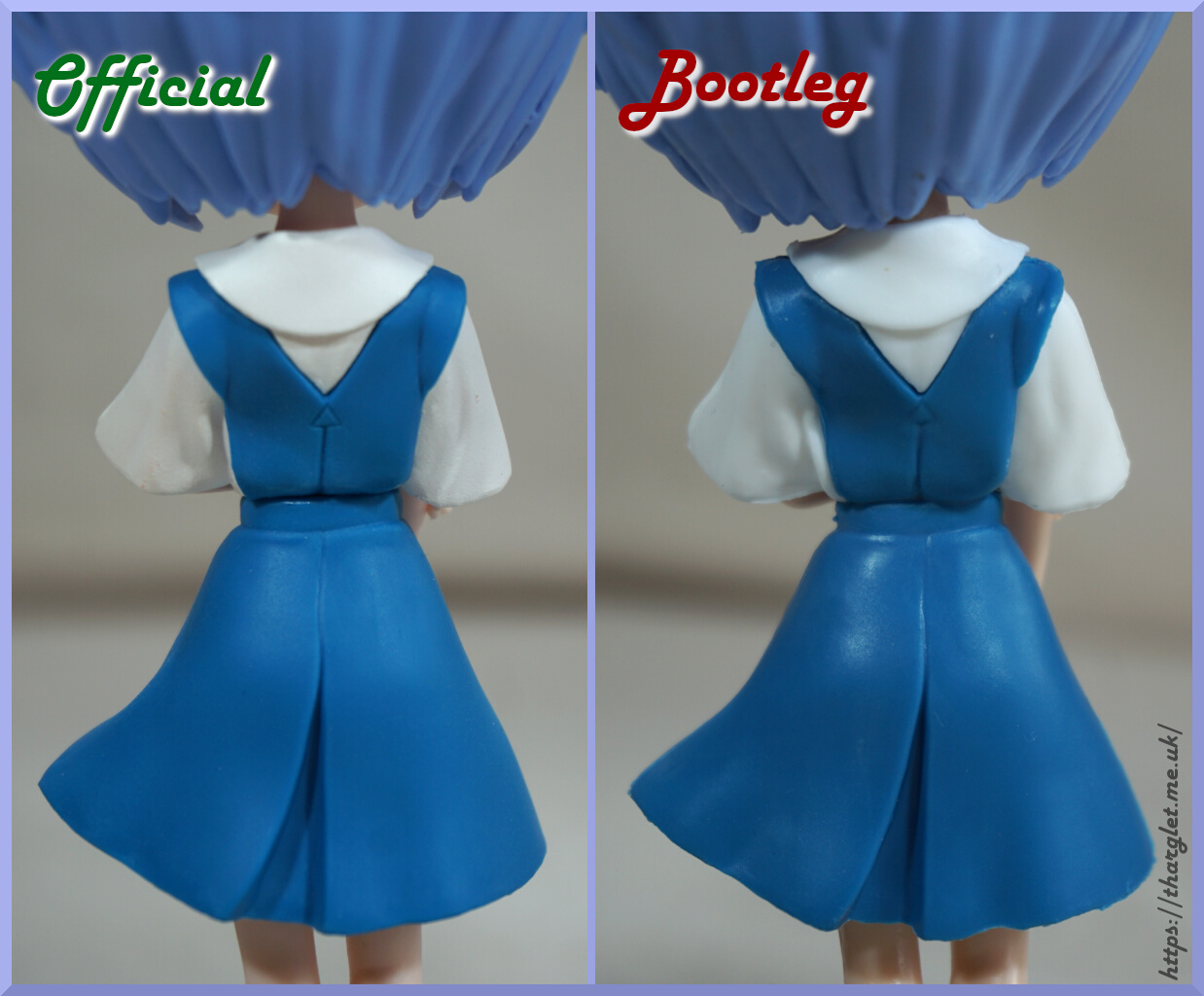 The backs is a pretty close copy, but looks cheaper from the shiny finish and slightly strange white plastic. The sculpting at the top of her dress is less distinct on the bootleg. 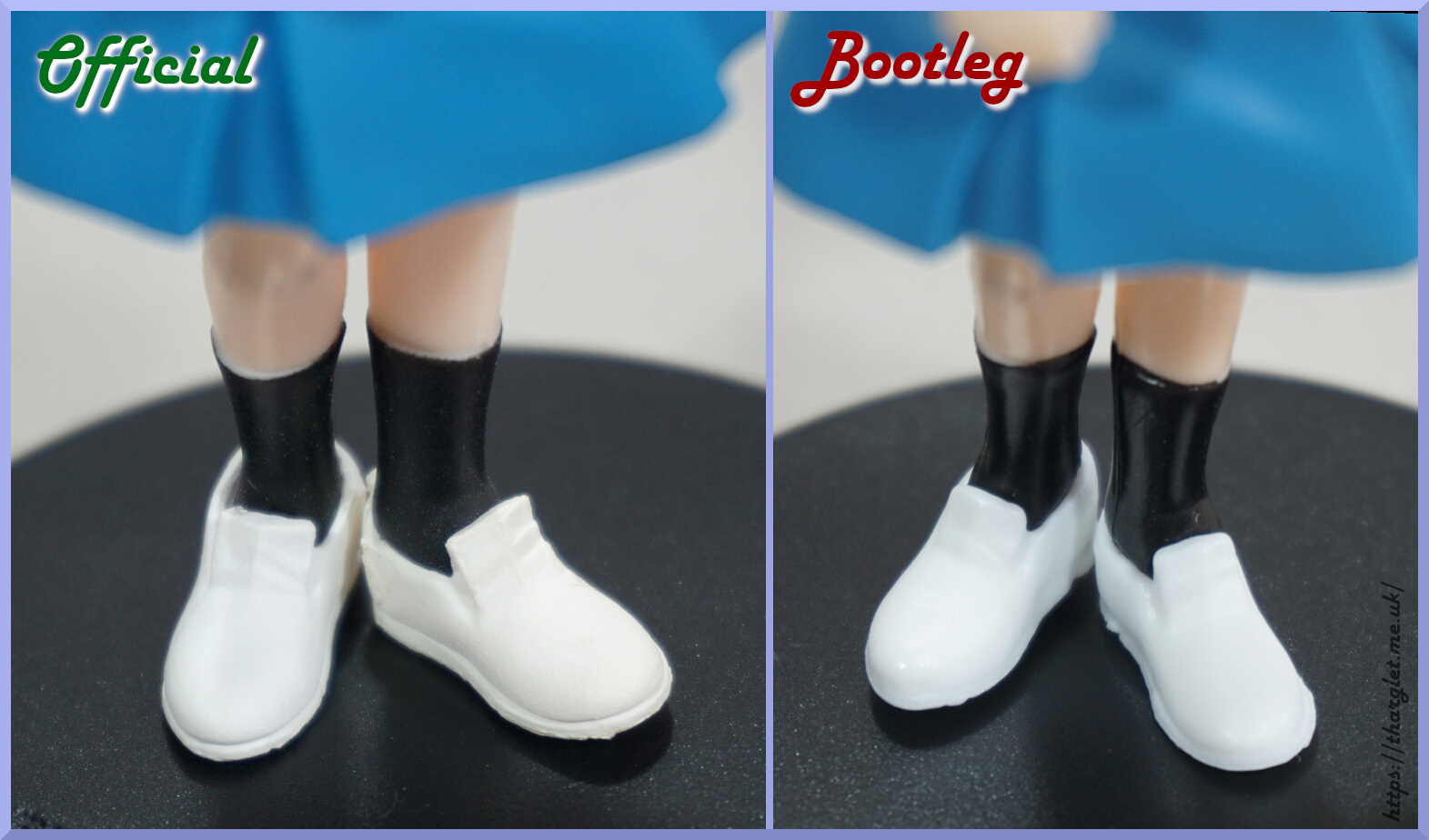 Again, we have bonus shiny on the bootleg. The shoes themselves are overly white, and we’ve lost a chunk of the detail that forms the sole.

Back of the shoes: 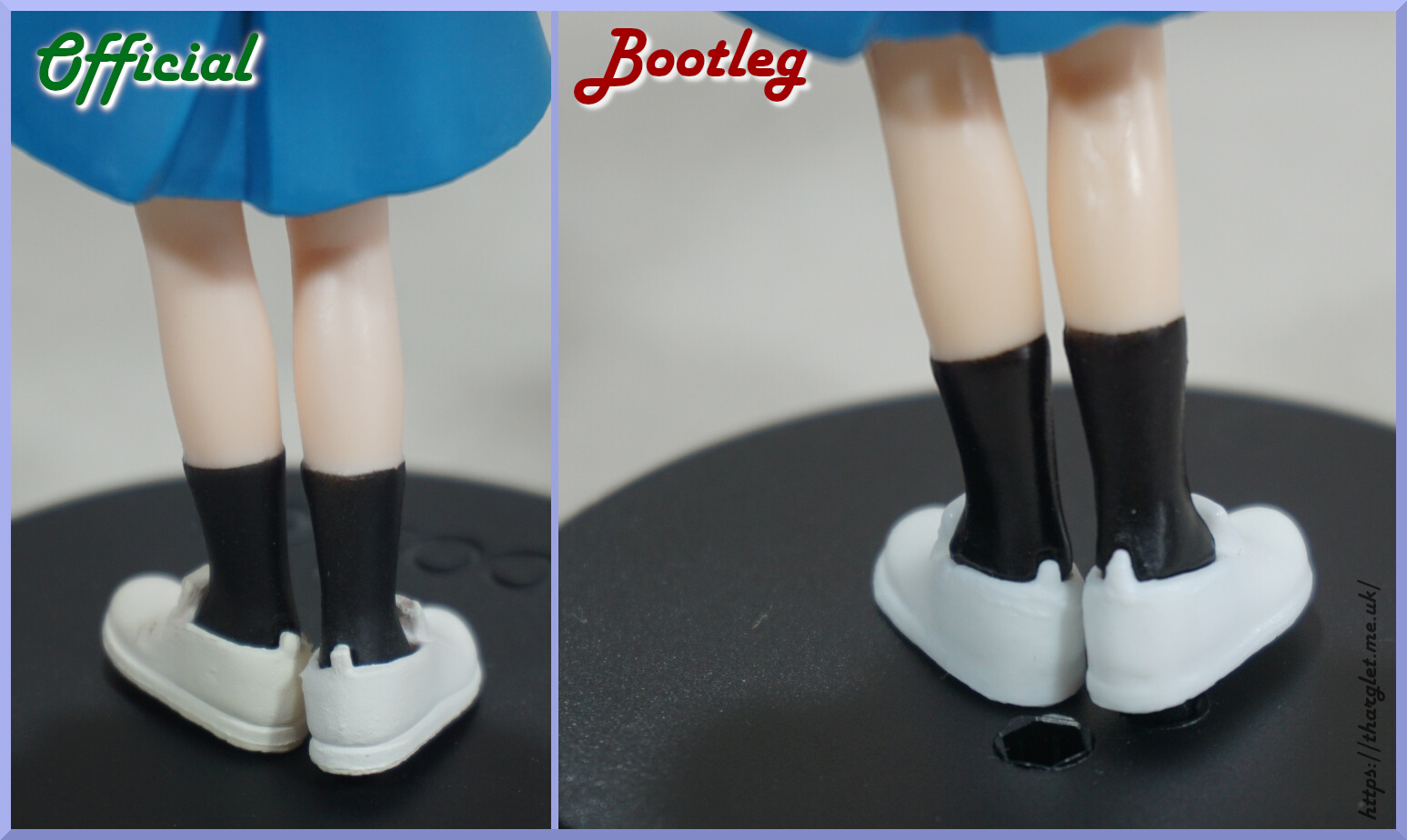 Shiny legs! What a surprise!
The tabs for pulling on her shoes on the bootleg have gone a bit funny-shaped and aren’t distinct parts from the main figure.

Telling these apart, the stand is the easiest place to look – none of these Evangelion Q Poskets should have a separate support stand piece and the “Q Posket” logo should be present on the front of the base. The overall finish of the figures themselves is mostly in line with prize figures on average, but less quality than a Q Posket should be. The shiny finish is probably the easiest trait to see when looking at the bootleg in the real.
The Rei bootleg is relatively decent, but the Asuka one looks quite derpy with the poorly fitting top pieces and poorly assembled eyes.
With the bootlegs, you’re likely to have some assembly issues – at least a couple of the heads wouldn’t go on easily, and they wouldn’t peg into the base as nicely. So they’re a bit frustrating to get displayed.
The officials have dropped a tiny bit from the prices I paid (especially if you don’t mind an opened box), so buying the officials isn’t necessarily that much more than the bootlegs.
Asuka bootleg is an easy “no” with her larger defects, Rei I could see someone being happy with… but confused about her extra stand piece.