Now to see how the boys compare! Good? Bad? Shiny?
If you haven’t read the article about Rei and Asuka, it can be found here.
This article will cover Kaworu Nagisa and Shinji Ikari.

The officials I bought from Mandarake

Like the girls, the bootlegs were just in baggies: 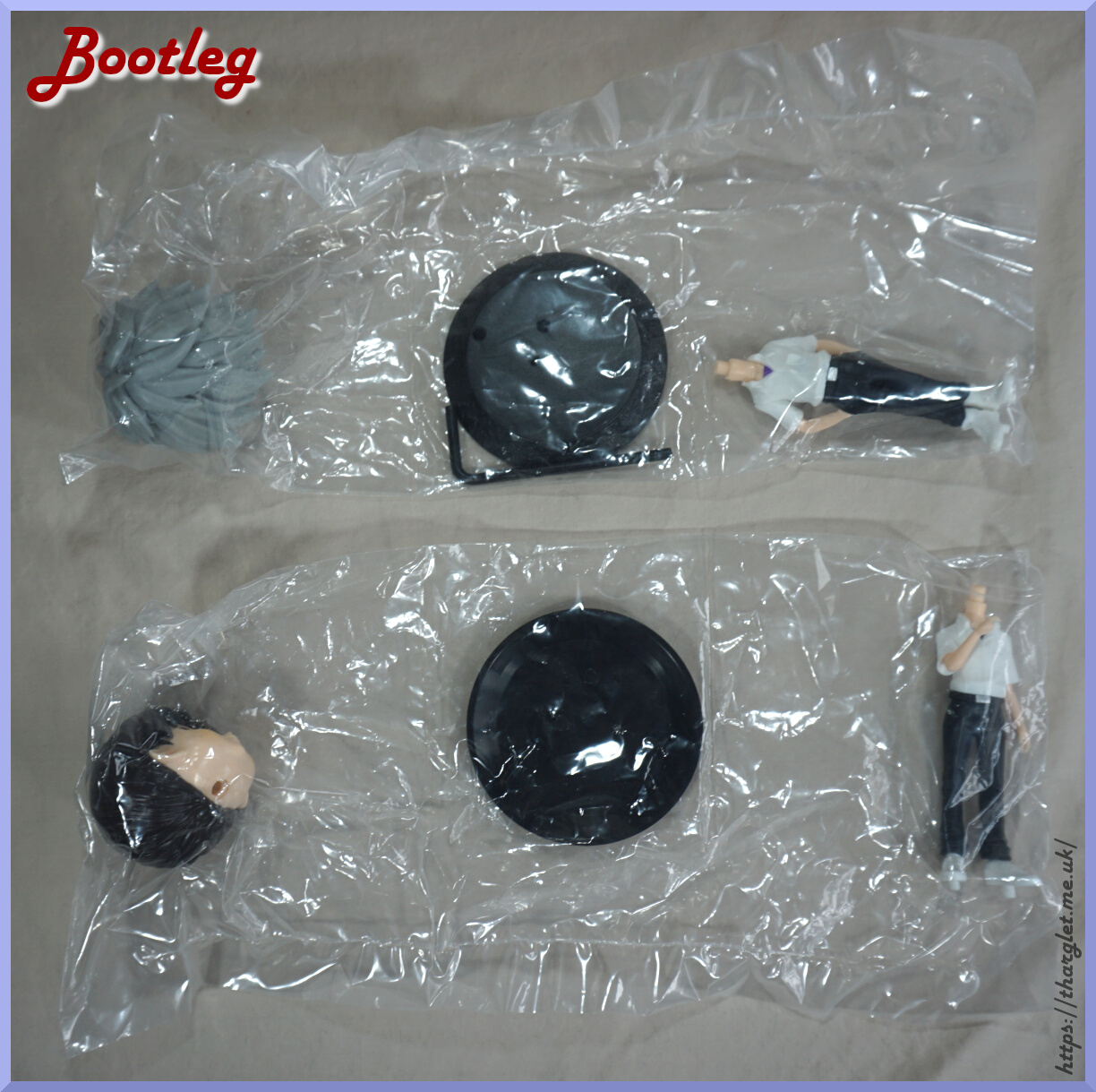 I’m seeing at least one extra in there… 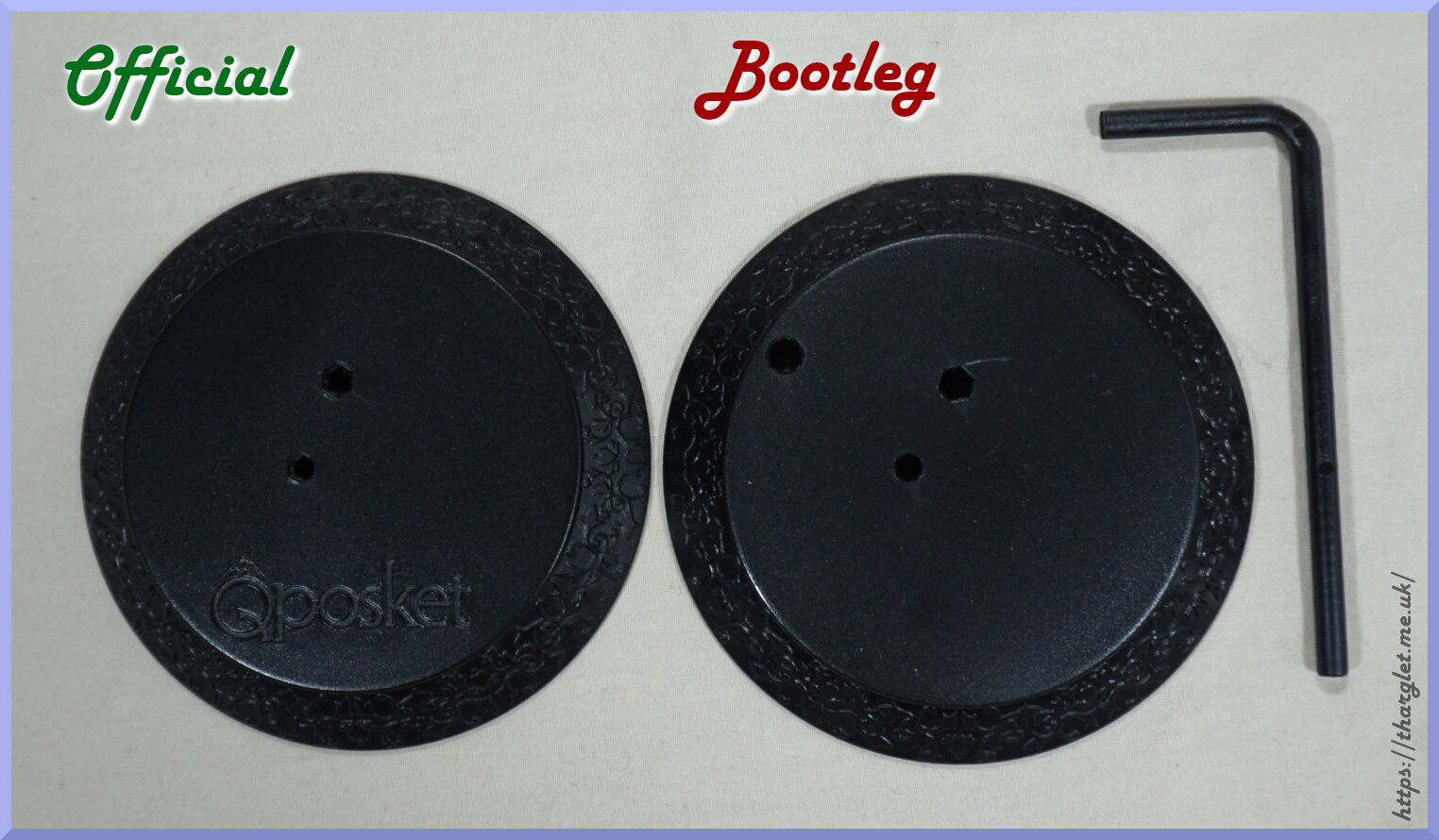 Instead of a 3-part base, we have a 2-part one instead, with a pole that goes into Kaworu’s back. Interesting mismatch from the girls, especially as I bought these as a set.
The bootleg base has an extra hole for the stand plus is lacking the Q Posket logo, same as the girls. 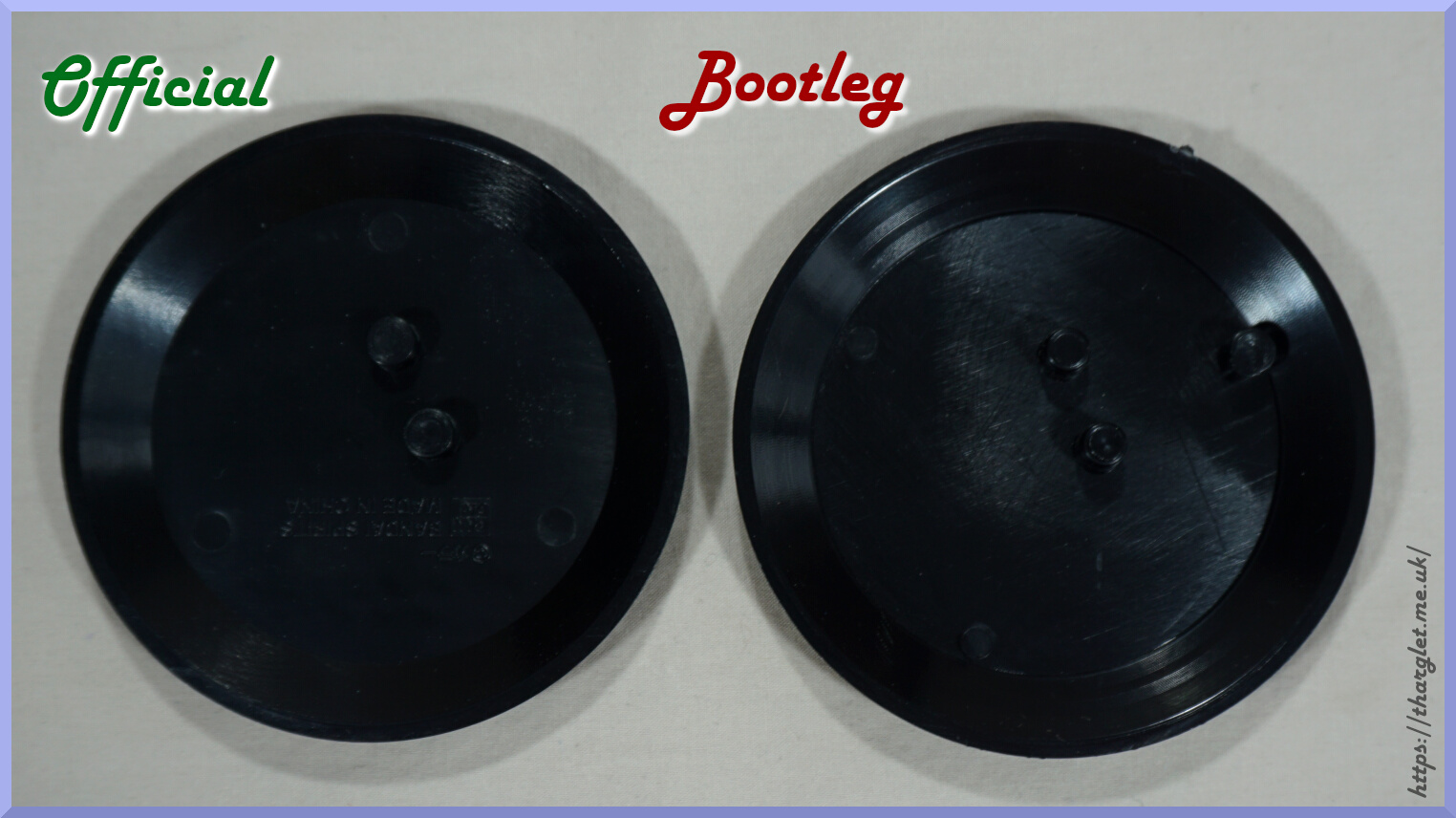 The bottom of the bootleg base lacks the Bandai Spirits marker, and has the different base peg holders the girl’s bases had. 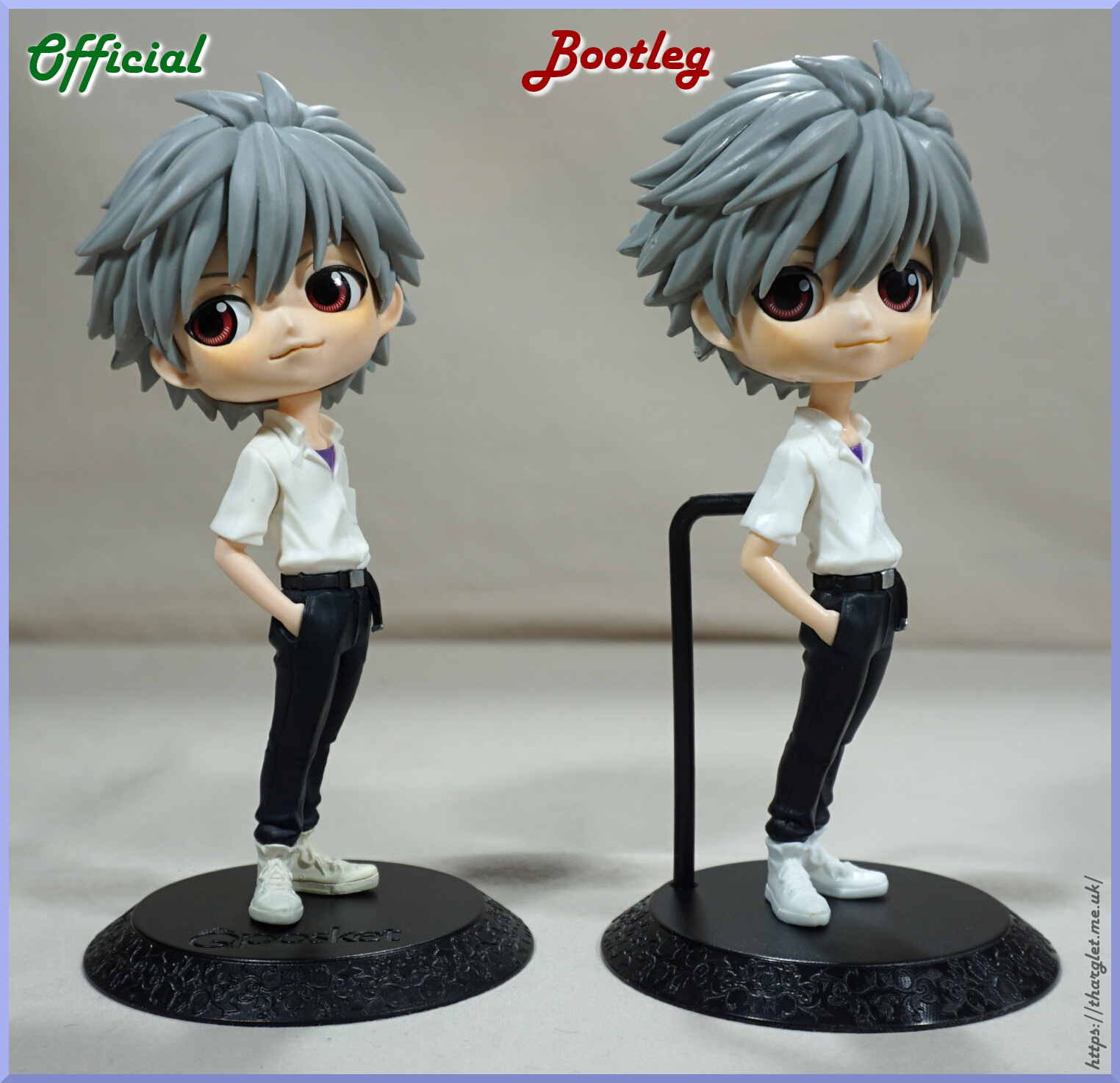 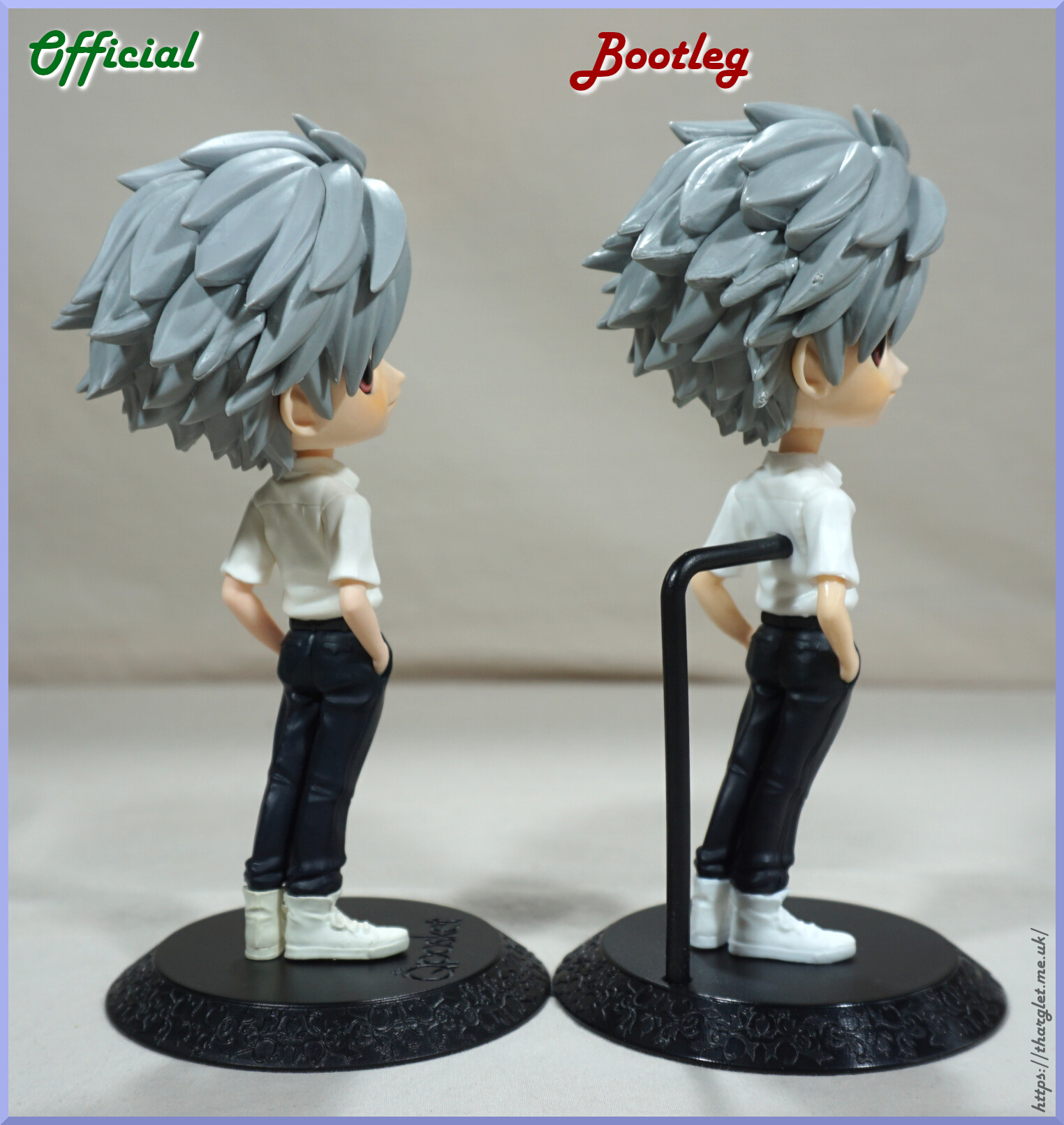 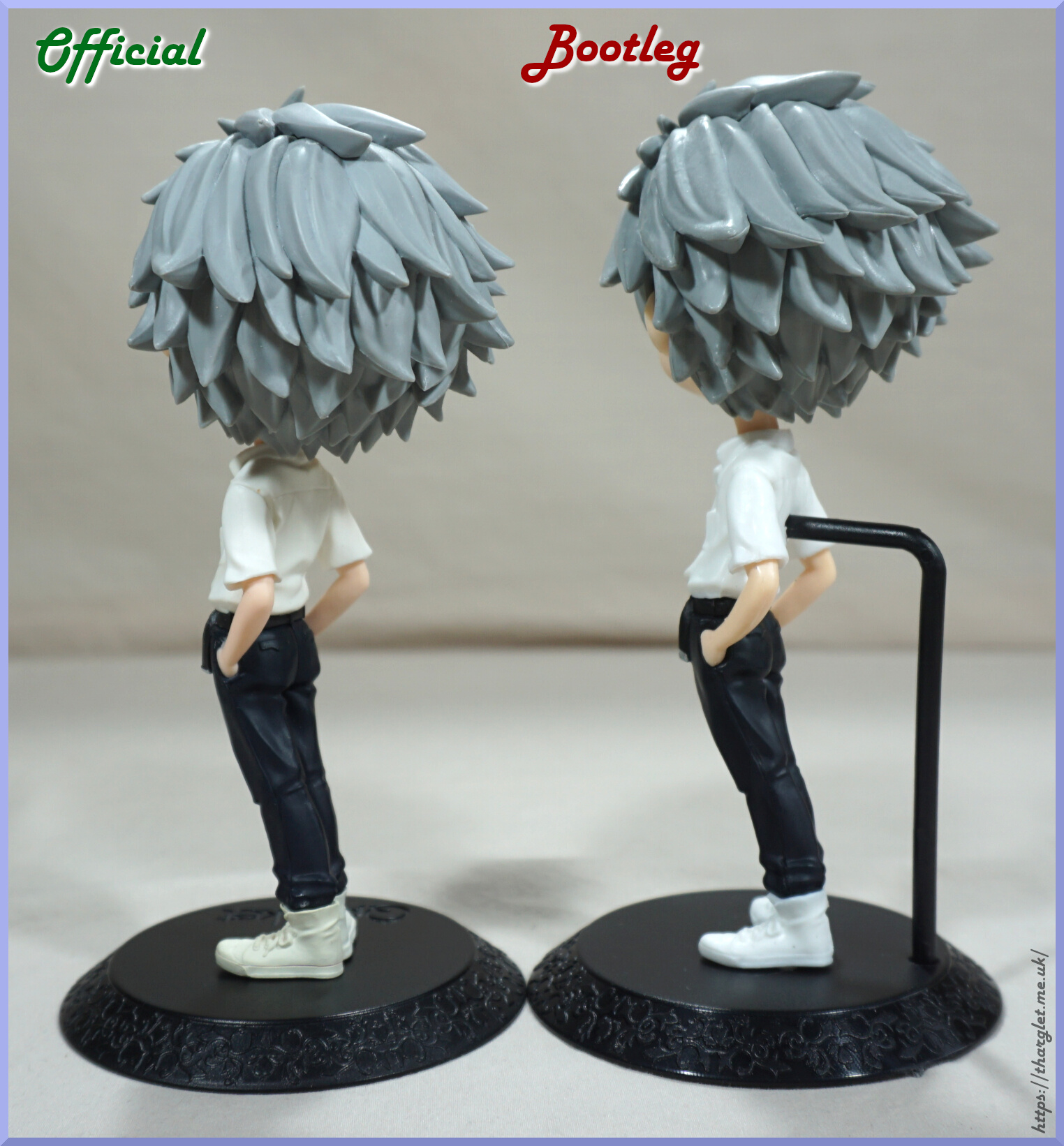 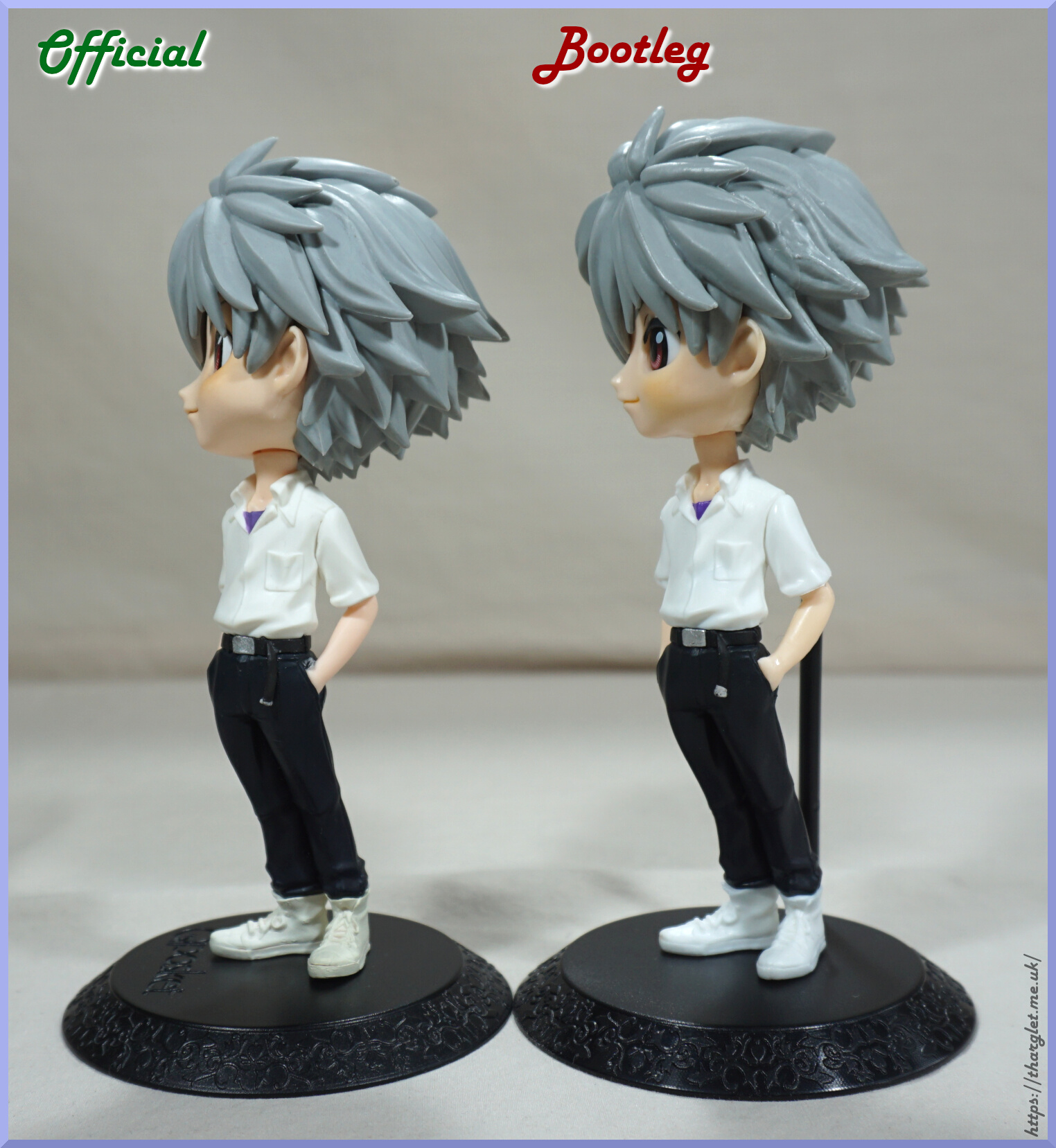 The extra stand piece is quite a noticeable difference for the bootleg. The straighter head angle makes the bootleg look less carefree. We’ve also got the extra shininess at pretty much all the angles too.

Yep, that hair on the bootleg is doing a good job of reflecting the photography lights. Most of the hair tips are about the same pointiness on the bootleg, which stops the bootleg’s hair looking entirely derpy.
The eyes have the same poorly printed defects as the girls.
With the blush, the official has a lot more on his face than the bootleg. With his mouth, the official has a much darker line between his lips giving more definition to his mouth. This and the head angle gives quite a big change to his expression, or at least it does to me.

The hair replication is mostly decent on the bootleg, but the shiny finish really does cheapen it. There are some areas with excess plastic on the edges of the hair chunks of the bootleg – easiest to see is in the bottom right.

Return of the icing – the bootleg’s shirt has an icing-like appearance. The bootleg’s undershirt is more neatly painted, but has the appearance of a bootleg polyester shirt with the shininess.
The bootleg skin also suffers from shininess, making him look sweaty. 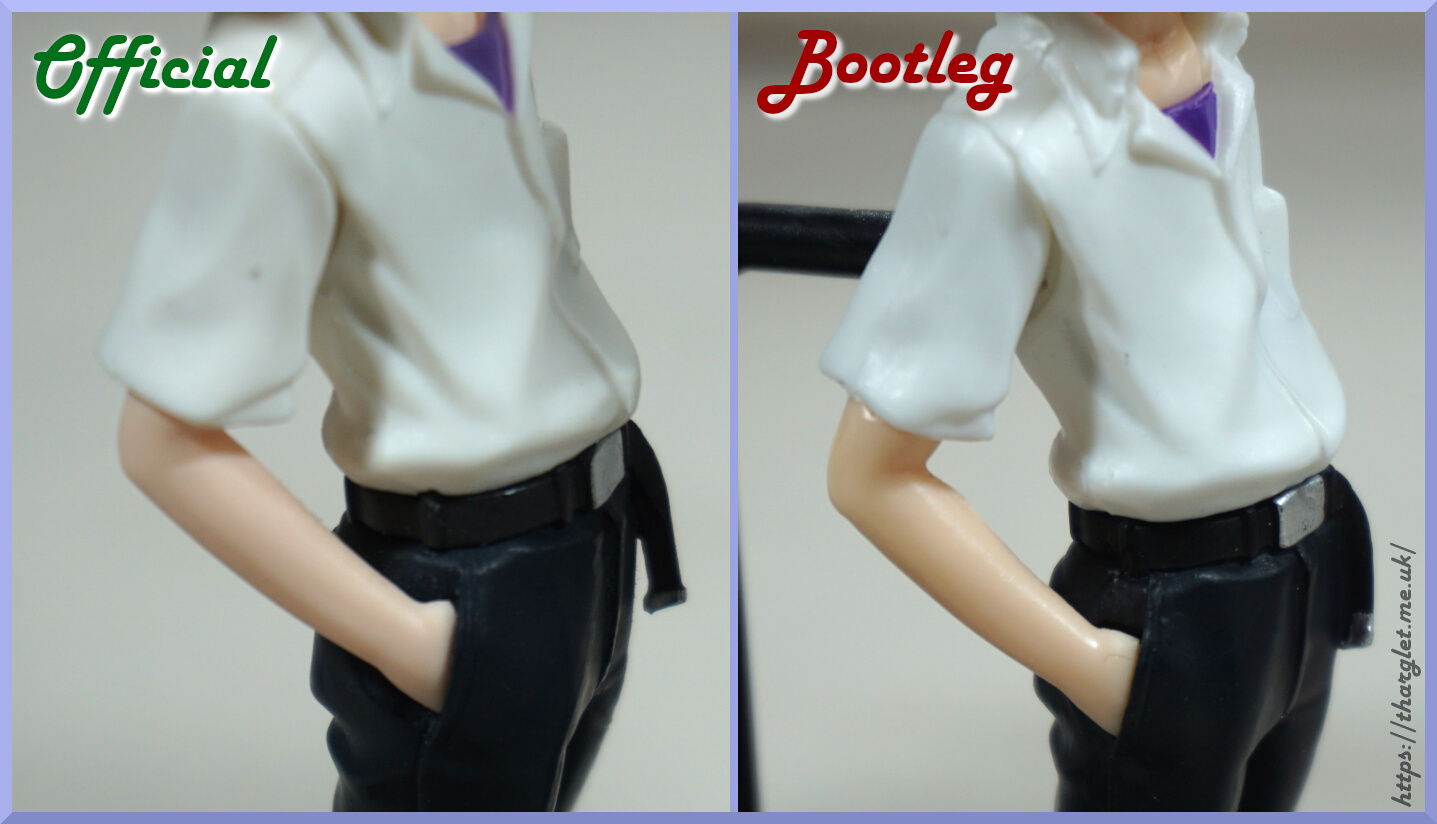 The bootleg’s sleeve hasn’t been assembled correctly, leaving a bit of a strange gap in his armpit.
From this angle, we can see that the bootleg’s belt end doesn’t hang as far away from his body as the official’s. 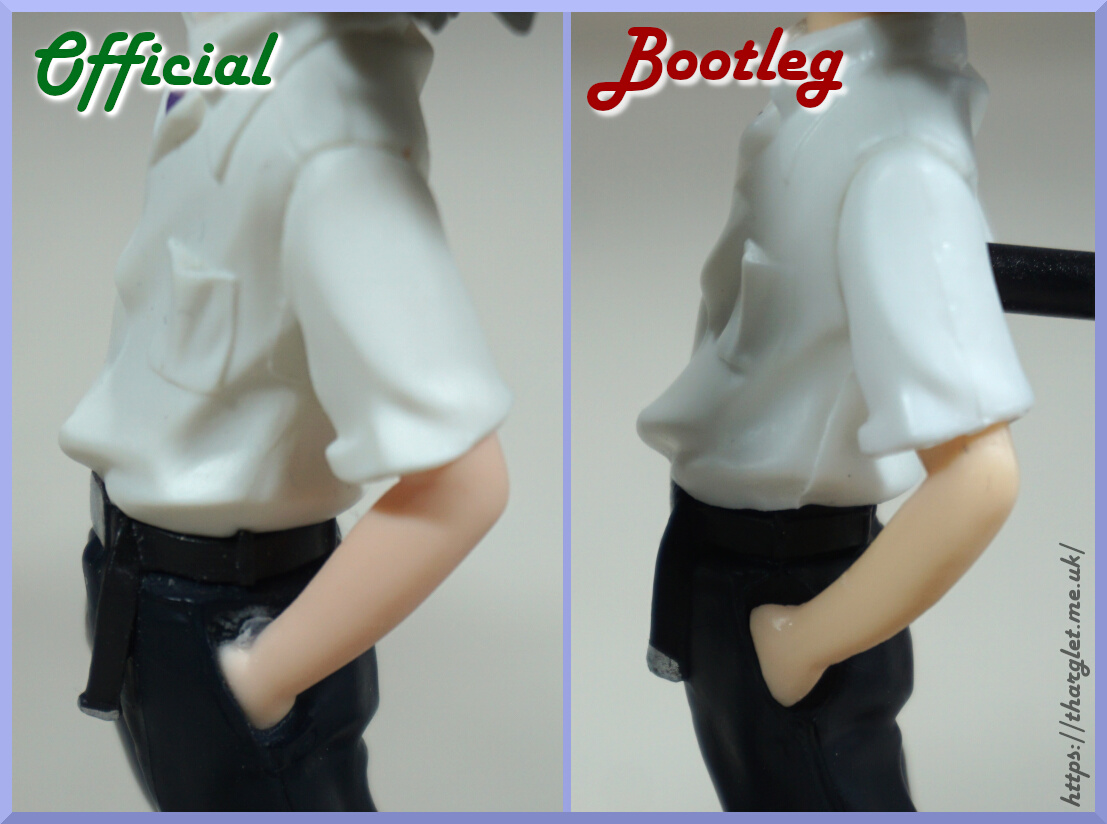 Here, my official kind of sucks – there is some extra glue from where his hand has been attached to his pocket. So one win for the bootleg here. Though I think I’ll take the glue mistake for trading the nicer skin colour and texture and the shirt that doesn’t look like icing. And the lack of seam on the sleeve. 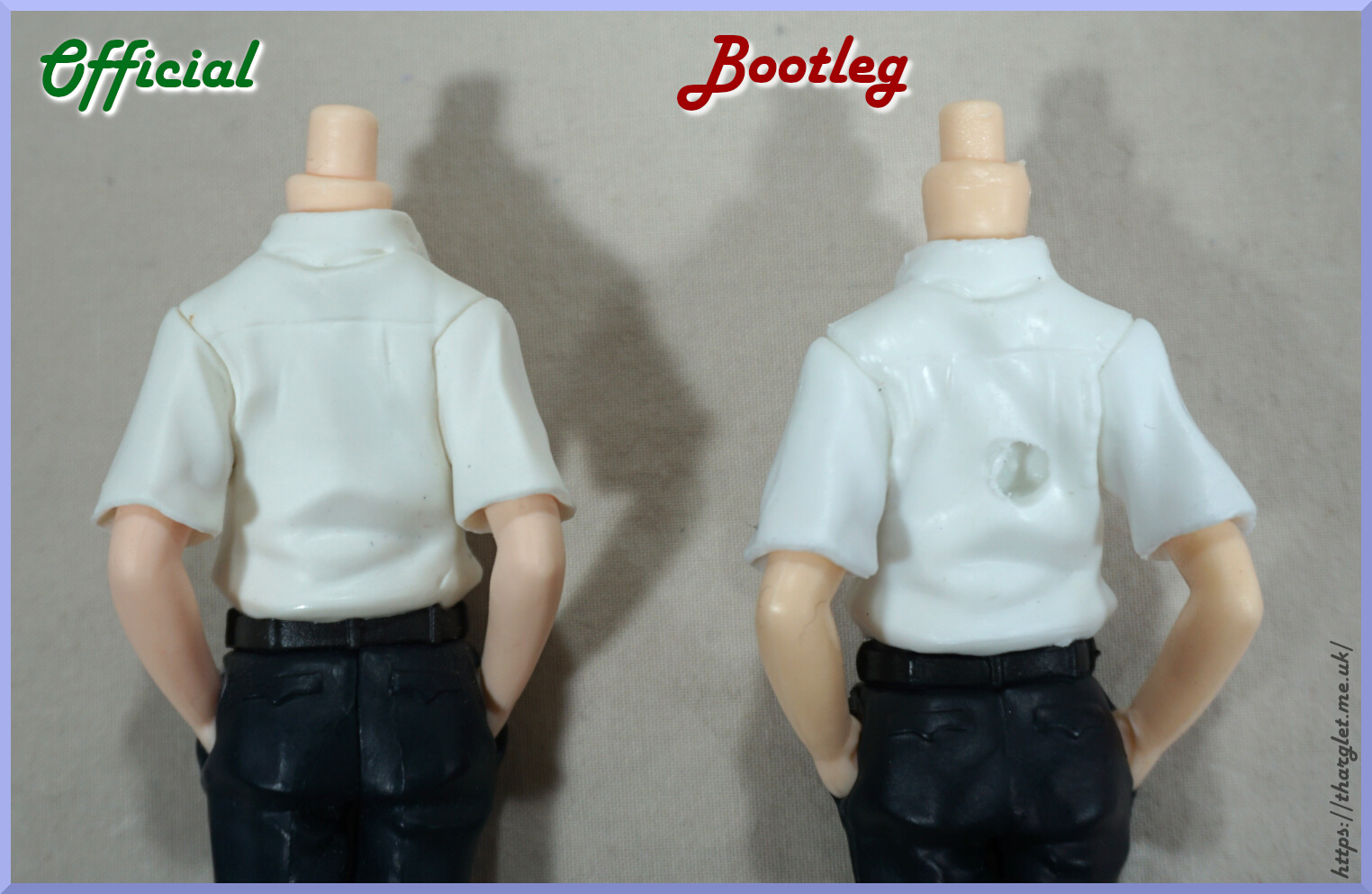 That’s one mutant neck the bootleg is sporting! Ew. The collar doesn’t fare much better, with a mess of rough edges. Moving to the middle of his back, we have an off-centre hole drilled into his back and not cleaned up.
From this angle we can see the bootleg’s arms haven’t been assembled correctly – his hands have unsightly divots on them where they should be connected to his trousers.

The official’s belt buckle has some of a texture to it, which the bootleg doesn’t have. The bootleg’s buckle is also a bit deformed and not entirely square.
The belt end has been painted larger on the bootleg – from the sculpting we can see it is just supposed to be a tiny bit on the end.
Looking to the trousers, the official is a very dark blue, but the bootleg has black trousers. A subtle but distinct change.

The official has gone with an off-white, whilst the bootleg has gone with straight-up white plastic. With the lack of paint and poor moulding, a fair bit of the detail is lost on the shoes. Definitely have to give this one to the official.

Here the bootleg’s pegs are white as his shoes have been cast in white plastic. The detail on the bottom of the bootleg’s shoes has also been moulded poorly. The official features some flesh-toned pegs thanks to the shoes being painted plastic. 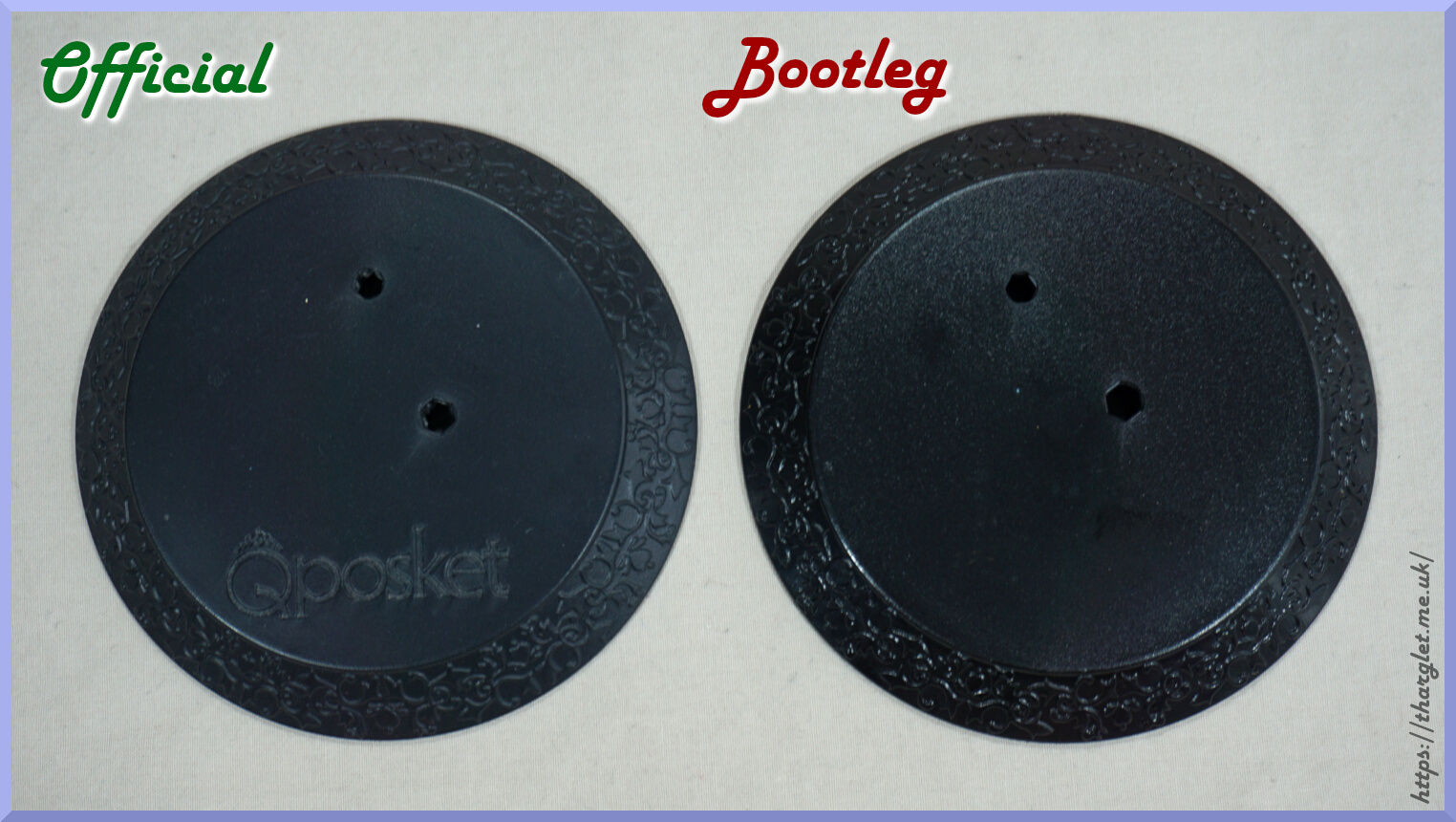 Now we’ve finally graduated to no support pole on either base – strange, considering all the others had some form of stand for the bootleg. But still no Q Posket logo. 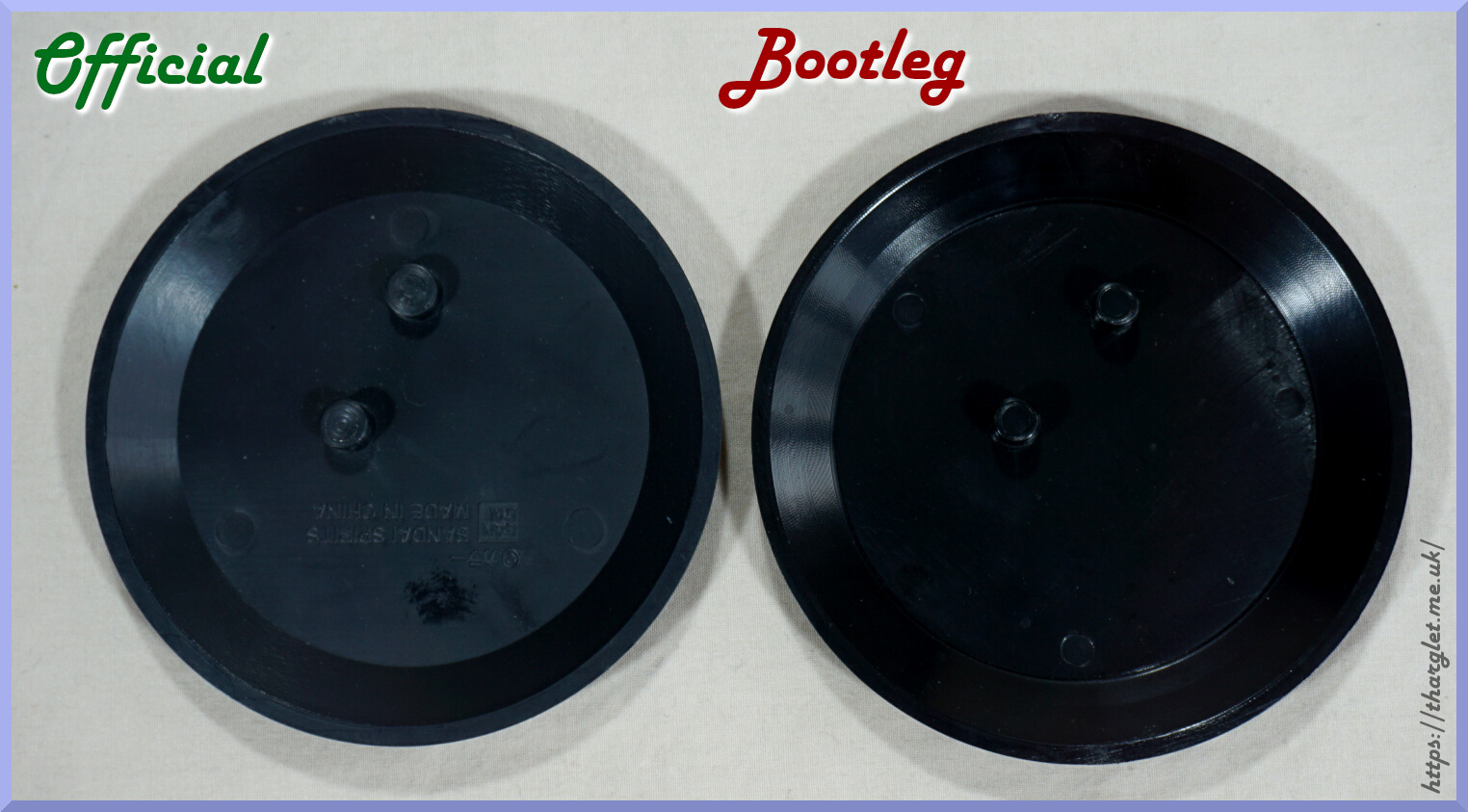 Yep, same as the others – notice on the official, nothing on the bootleg. 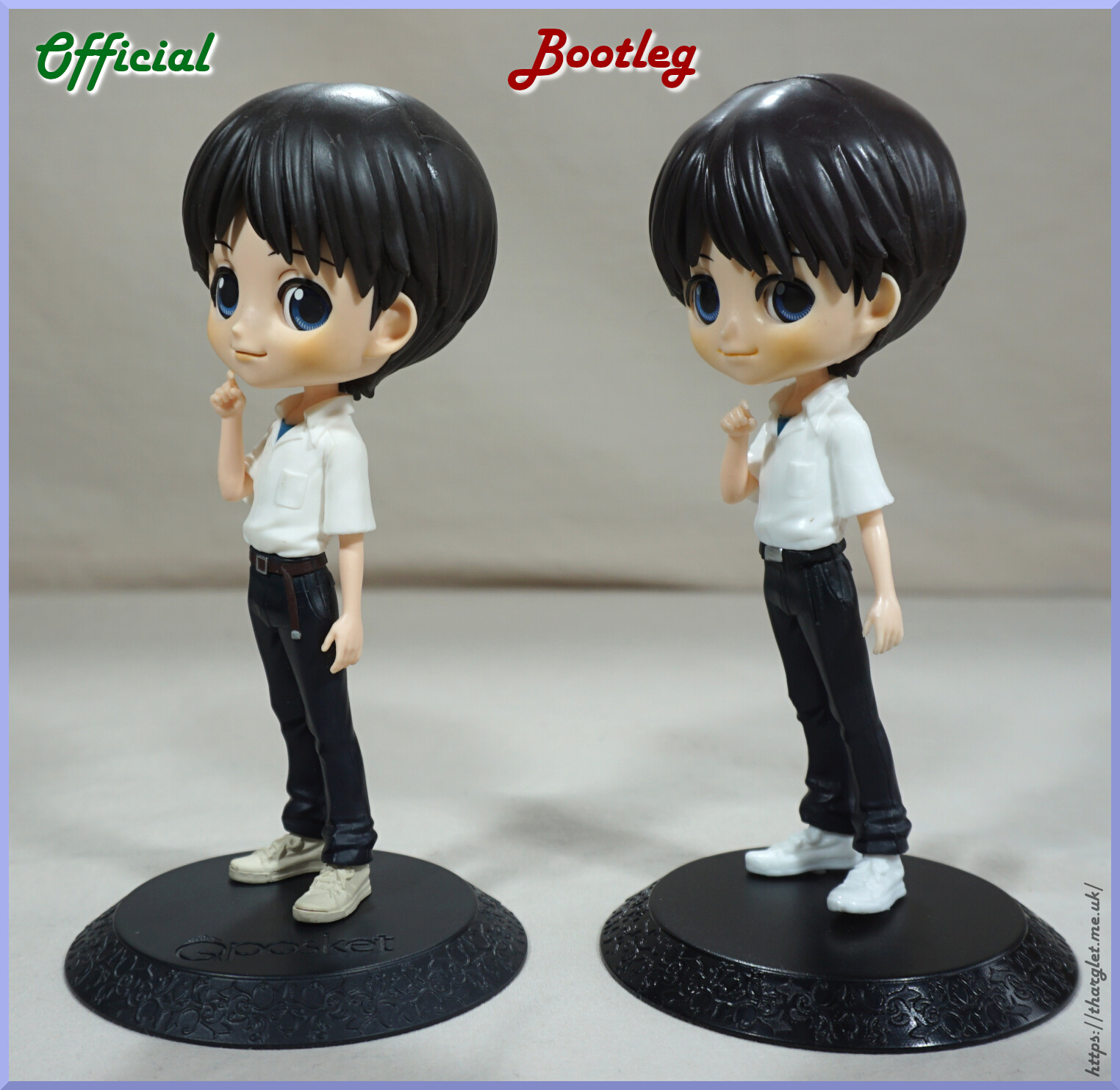 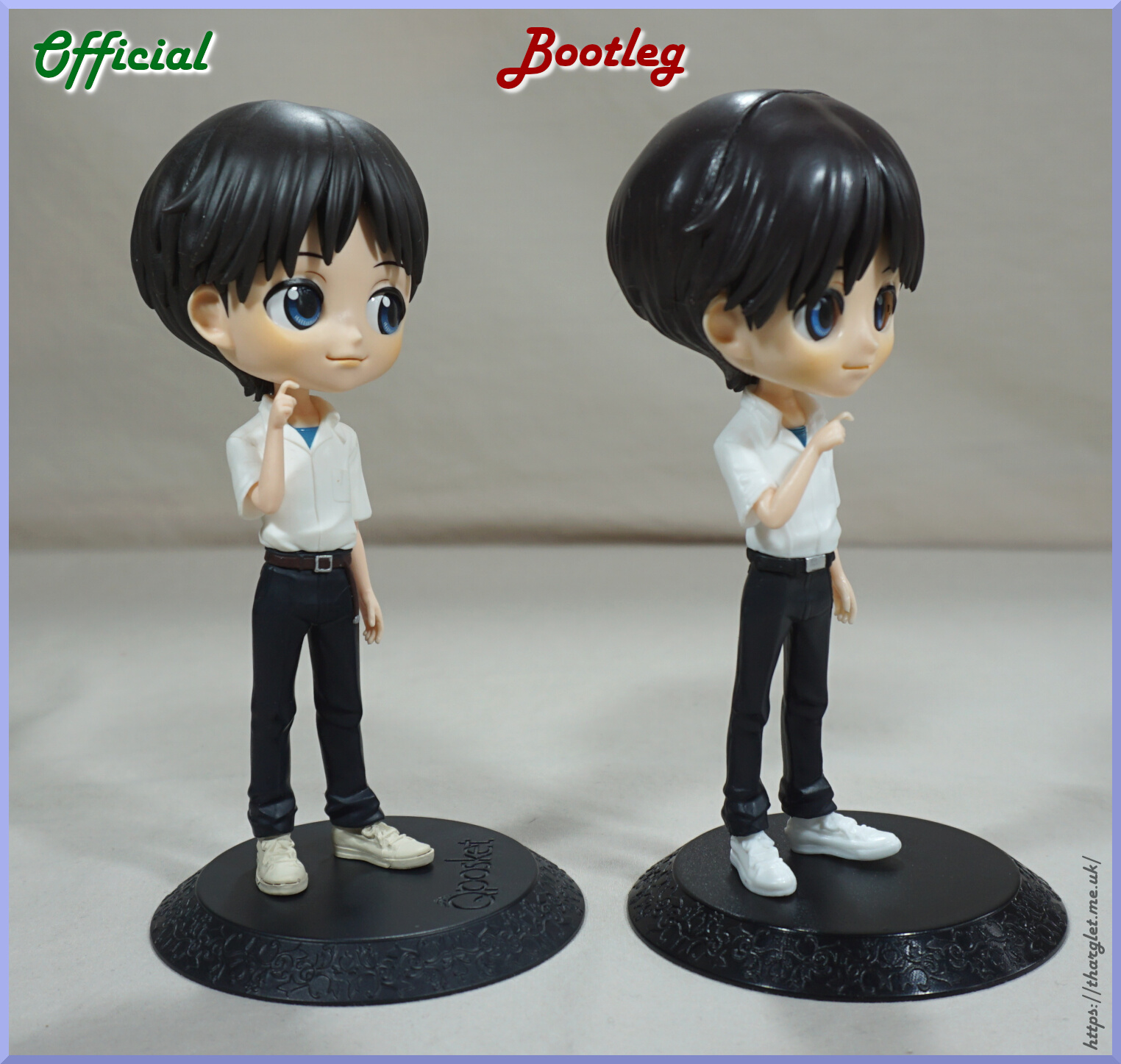 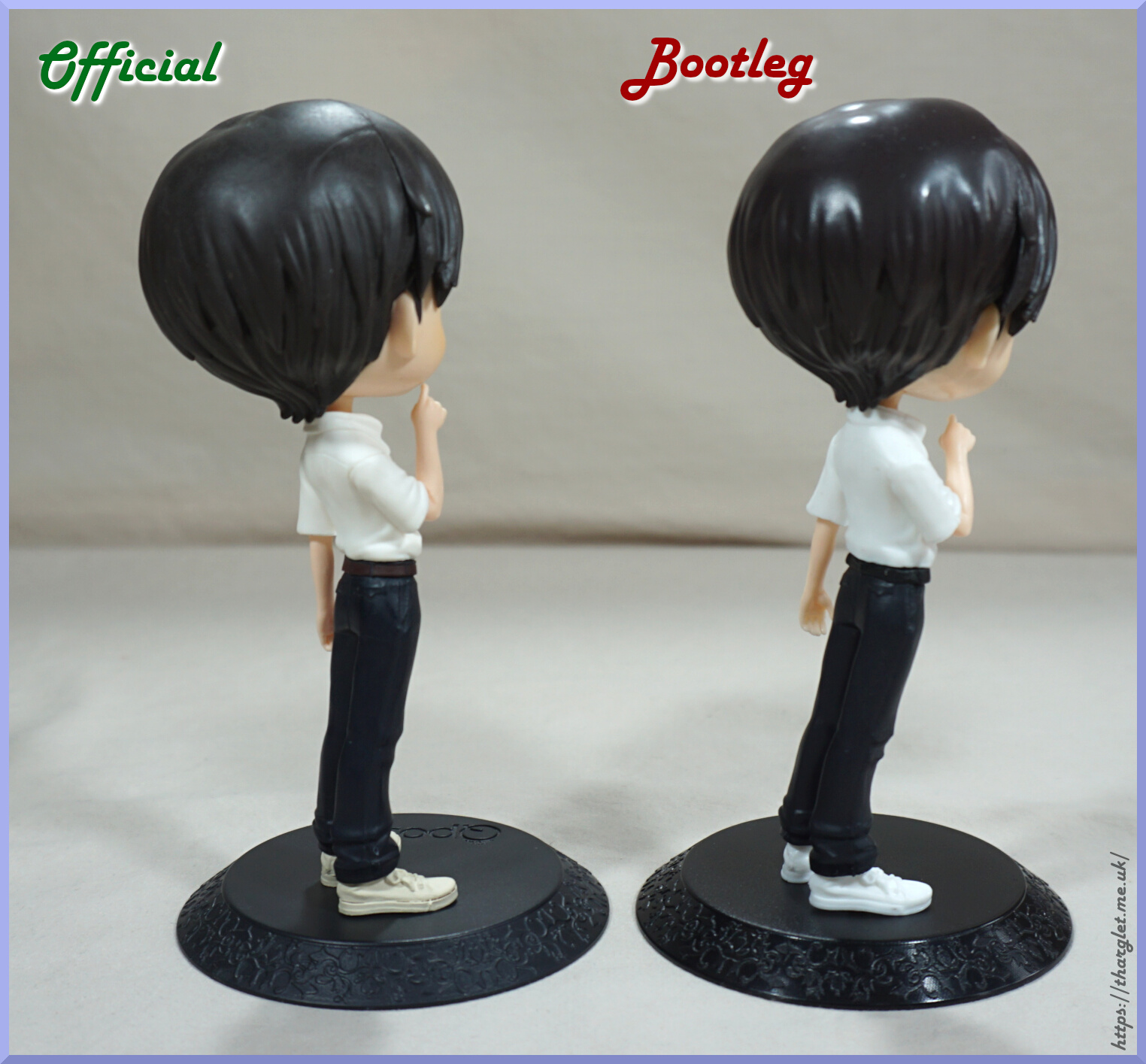 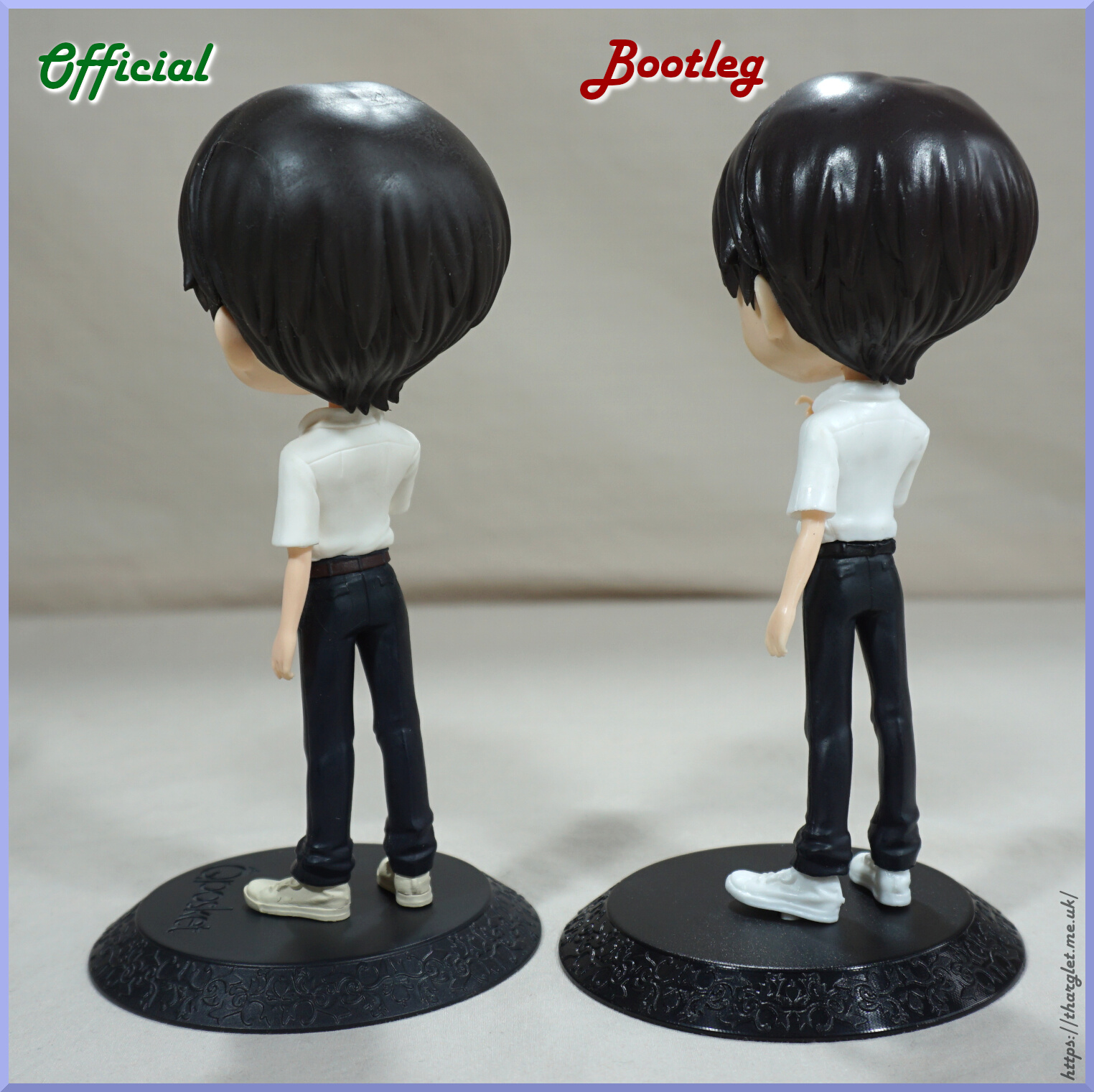 Bootleg Shinji is in need of a hair wash – lookin’ greasy. With the pose, it looks like official Shinji is thinking, and bootleg Shinji has had his realisation. The belts are also different between the two. 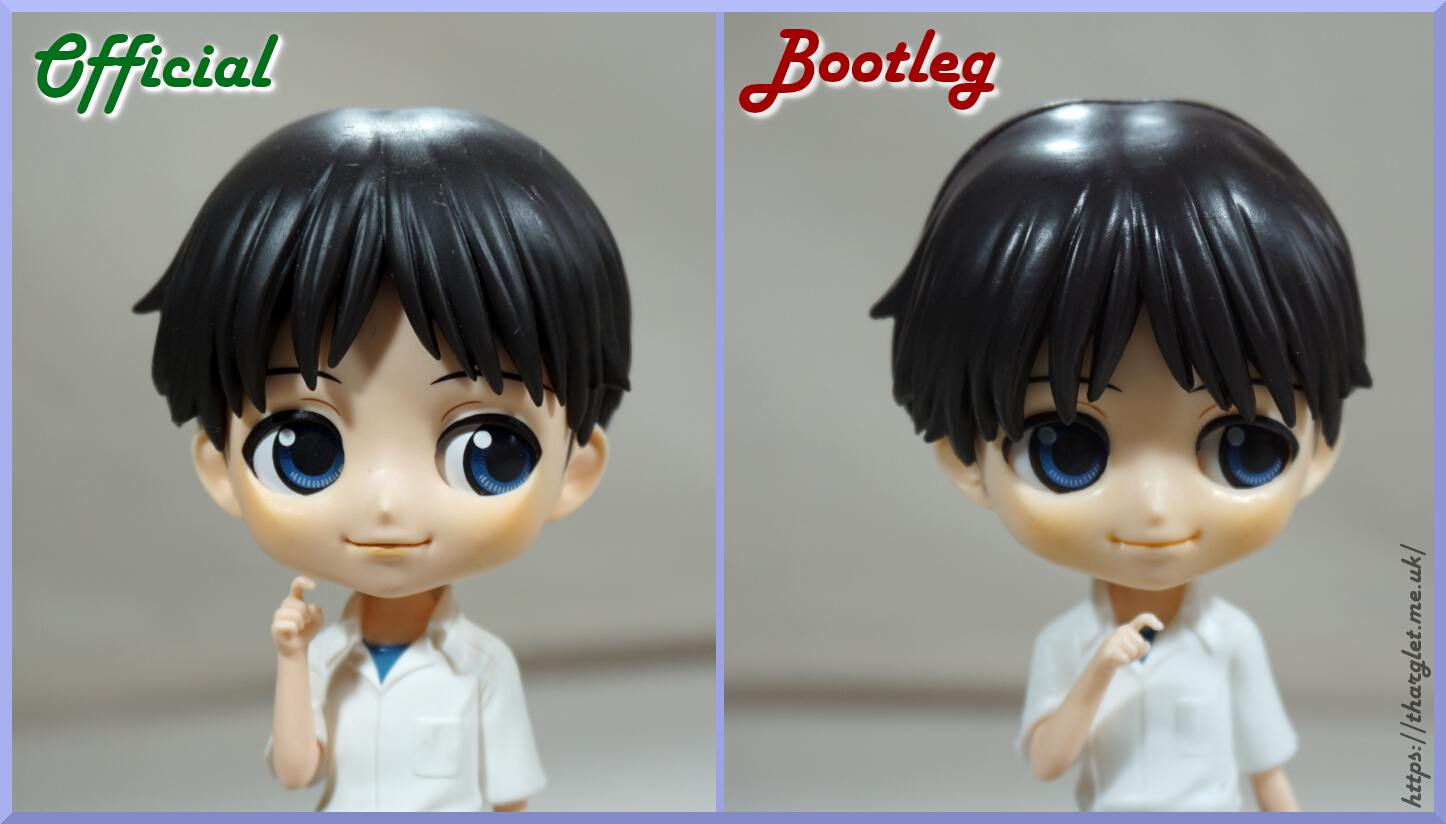 Unfortunately my official didn’t travel so well, and had scratches on arrival sadly. Did think about buying another one at one point, but ultimately decided not to.
The bootleg’s hair is further down his face, covering his eyes slightly, and looking slightly sadder in the middle. The smooth hair shows off the bootleg shininess well.
The bootleg eyes are on a par with the rest of this bootleg set.
Similar with Kaworu, the mouth on the official has been given a deeper accent colour. Though bootleg Shinji seems to have more of a smile.
The bootleg arm has been mounted at the wrong angle, so he’s no longer stroking his face, which makes the pose kind of odd.

Side of his face: The bootleg’s hair is a bit of a mess – the parts aren’t adhered correctly leaving a large gap, and something’s gone all kinds of wrong near his ear.

Top of his head: More of a view of the poor join on the bootleg. Also the bootleg’s hair halves don’t seem to match properly in colour to me. Despite the scratching, think I’m going to stick with the official here. 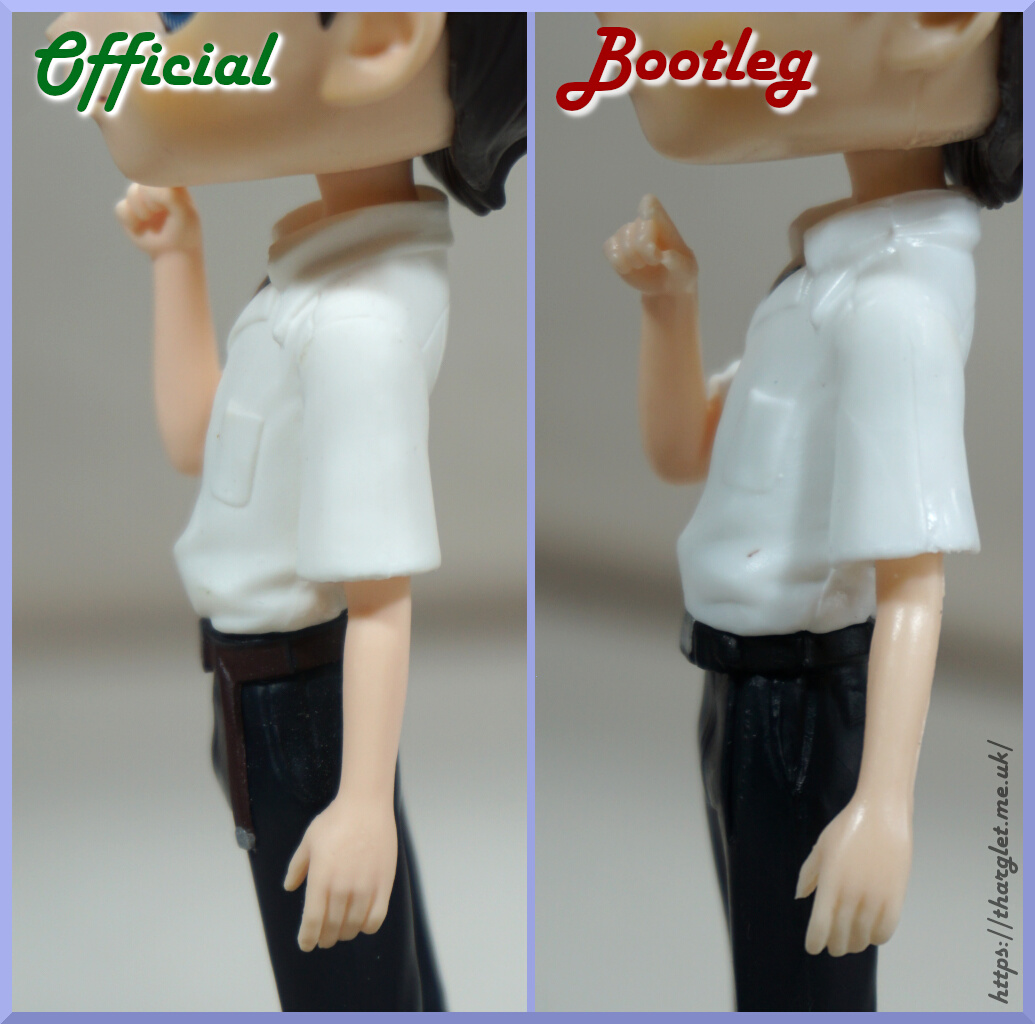 The bootleg shirt is a mess from this side – we have a couple of obvious seams and the icing appearance. The moulding of the collar is also poor.
The bootleg’s left arm has various bits of excess plastic – most notable near his thumb – as well as the shiny finish.
The bootleg’s trousers are also shiny and less refined than their official counterpart. 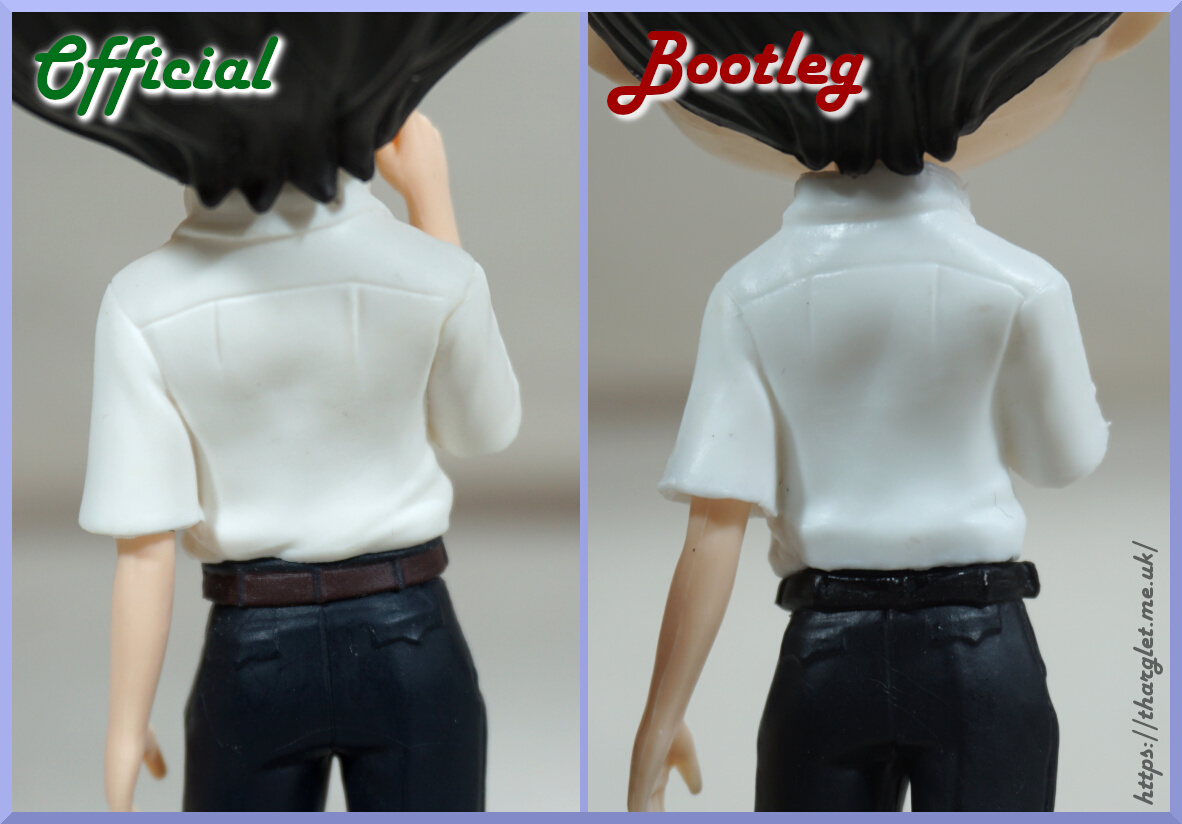 The bootleg’s moulding is less distinct in all parts, plus we’ve lost the ruffles entirely at the bottom of his shirt. The bootleg’s right pocket is also trying to vanish underneath his belt – not a good look. The belt itself is black instead of brown too.

Let’s have a look at that belt from the front:

Hm, not a match at all! The bootleg’s is overly chunky, black and has a solid belt buckle. We’re also entirely missing the end of the belt that should be dangling down, leaving a strange groove in his trousers.
Wait a minute… has bootleg Shinji nicked Kaworu’s belt…? Ha, I thought it was familiar! Make of that what you will :P.
Looking at my official, we have a plastic flaw here, showing that prize figures aren’t immune from such defects – underneath the dangling belt part we can see a hairline mark.

As with Kaworu, we have the horrible overly-white sneakers on the bootlg. The officials look much nicer and more true to the show. With all that angel-fighting, you can’t keep your trainers that pristine.
The sole of the bootleg’s right shoe has also gone wrong at the front.

Same as Kaworu, we have the white pegs for the bootleg and flesh ones for the official. And the poor replication of the soles on the bootleg. 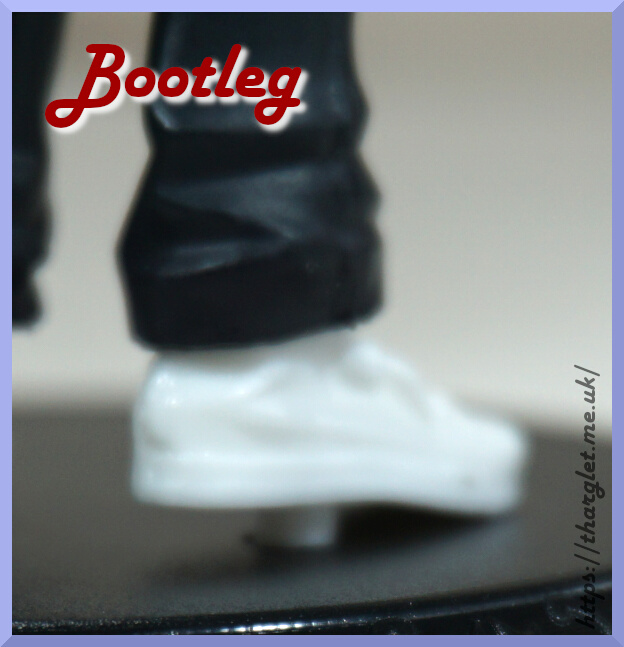 Most of these bootlegs, I got them assembled decently well in the end… but this peg was still a pain. Not the best look.

The bootlegs aren’t horrible, but they’re not great either. With more parts of the boys’ figures being white, the poor white plastic on the bootlegs is a greater issue than with the girls. The shiny skin and hair is also present. I’d say the hair was done better on the boys than the girls as there is a lot less seam issues.
Both of the boys’ bootlegs look rather naff, so couldn’t really recommend to someone who wouldn’t have an issue collecting bootlegs.
Telling them apart is also fairly easy – the lack of Q Posket on the base gives them away, as well as Kaworu’s extra base part. My bootleg Shinji was also missing a part, which is a fairly big clue as well as having the wrong belt. The shoes also look suspiciously poor on the bootlegs.
Overall, I’d say this set of Q Posket bootlegs fit the definition of “cheap knockoff” fairly well. Not the nightmare fuel of the previous prize figures I got, but not good either.