These figures I had very much forgotten there were bootlegs of – I remember briefly seeing them in my early days of eBay then promptly forgot about them. Recently I was casually browsing Taobao (a Chinese marketplace site where you can buy both official and non-official goods) and came across this pair – the dog alien and the chestburster. As I was doing a Taobao order anyway, I chucked these two in seeing as they were cheap.

The official I bought from eBay

I don’t have the official boxes any more, but they’re fairly typical fare, with a picture of an alien warrior on the front, and photos of the figures you can get on the back.
The bootlegs have gone for quite a different presentation, which makes them look dissimilar at first, but we will soon see how close the figures are. 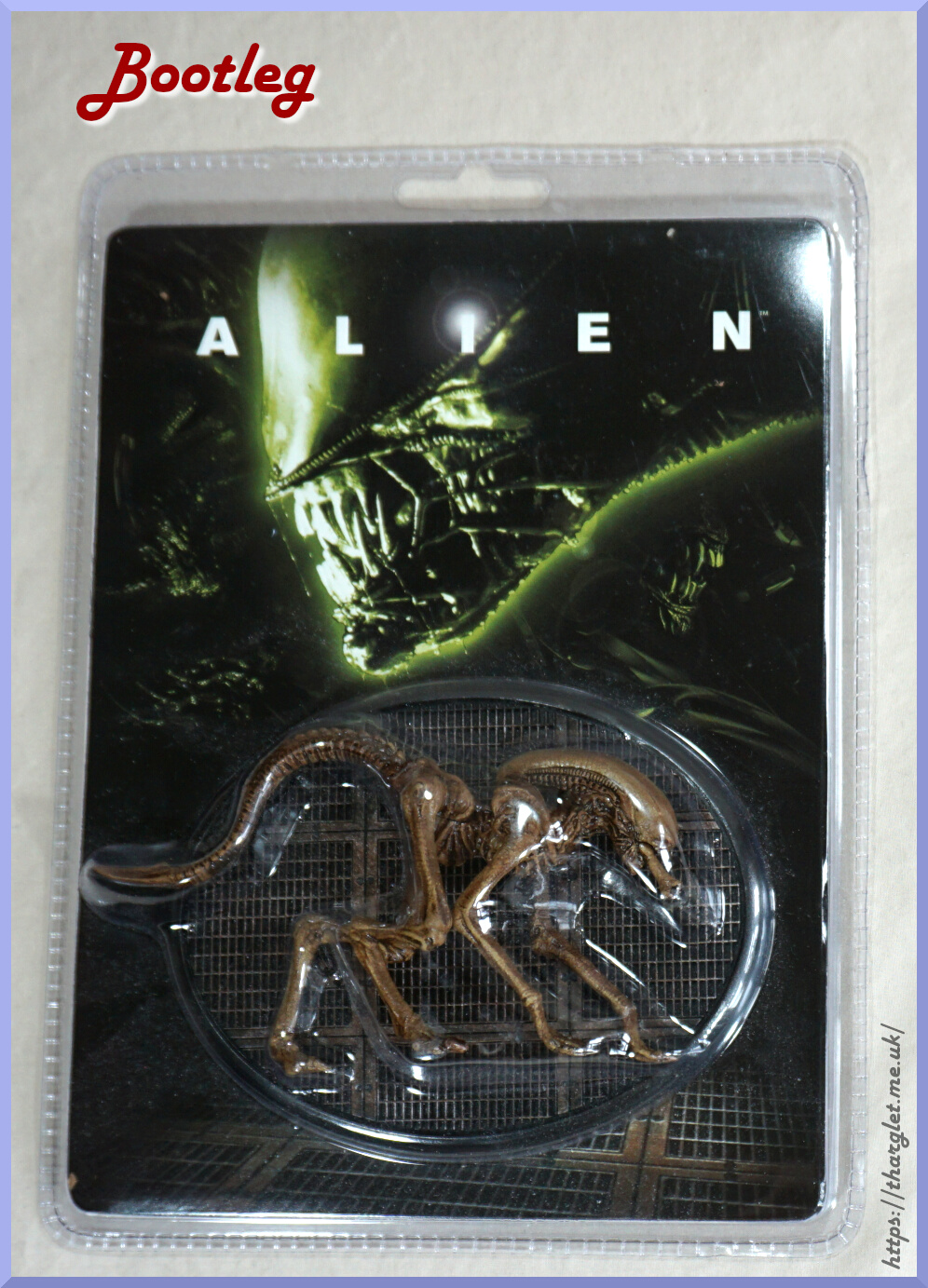 The bootleg box is a heat-sealed blister, giving us a good look at the figure – no blind box here! We can see the dog alien atop its circular base, with no assembly required – the original requires you to attach its legs.
The background is a fairly generic Alien design and no maker to be found. 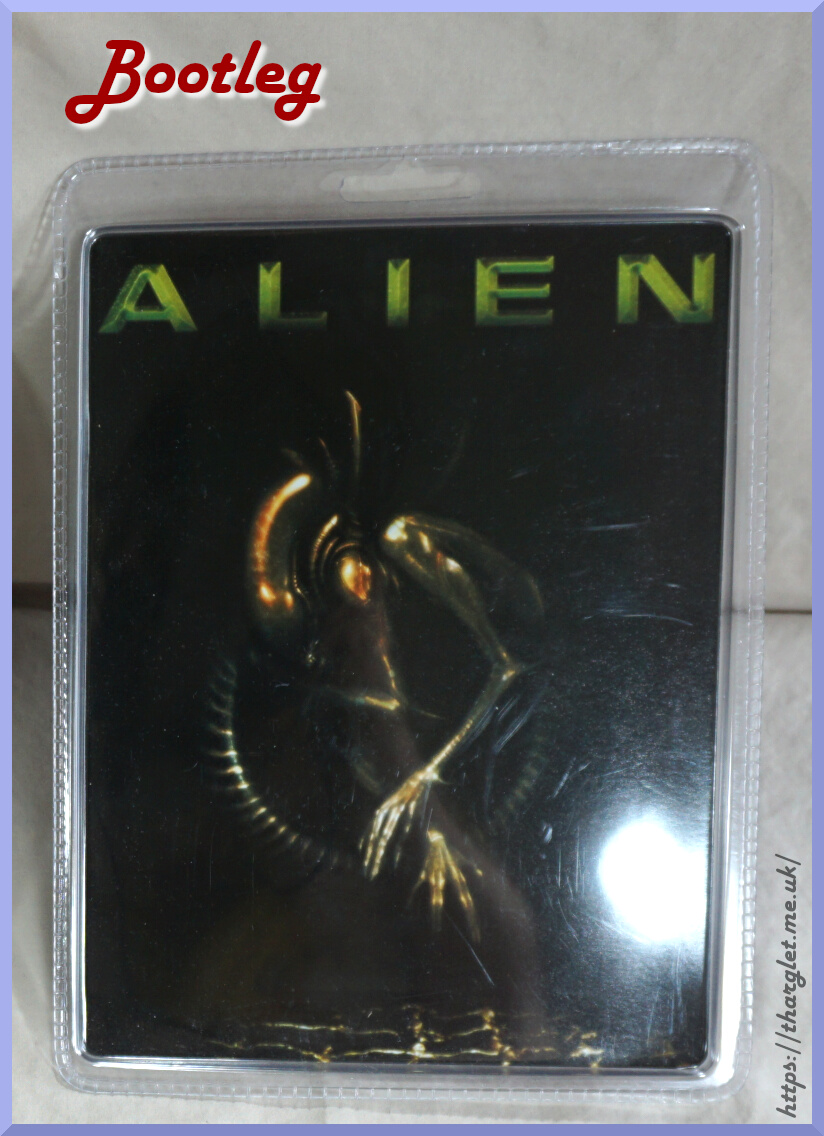 A blurry copy of some more artwork. No information to be found here.

Card out of its box: 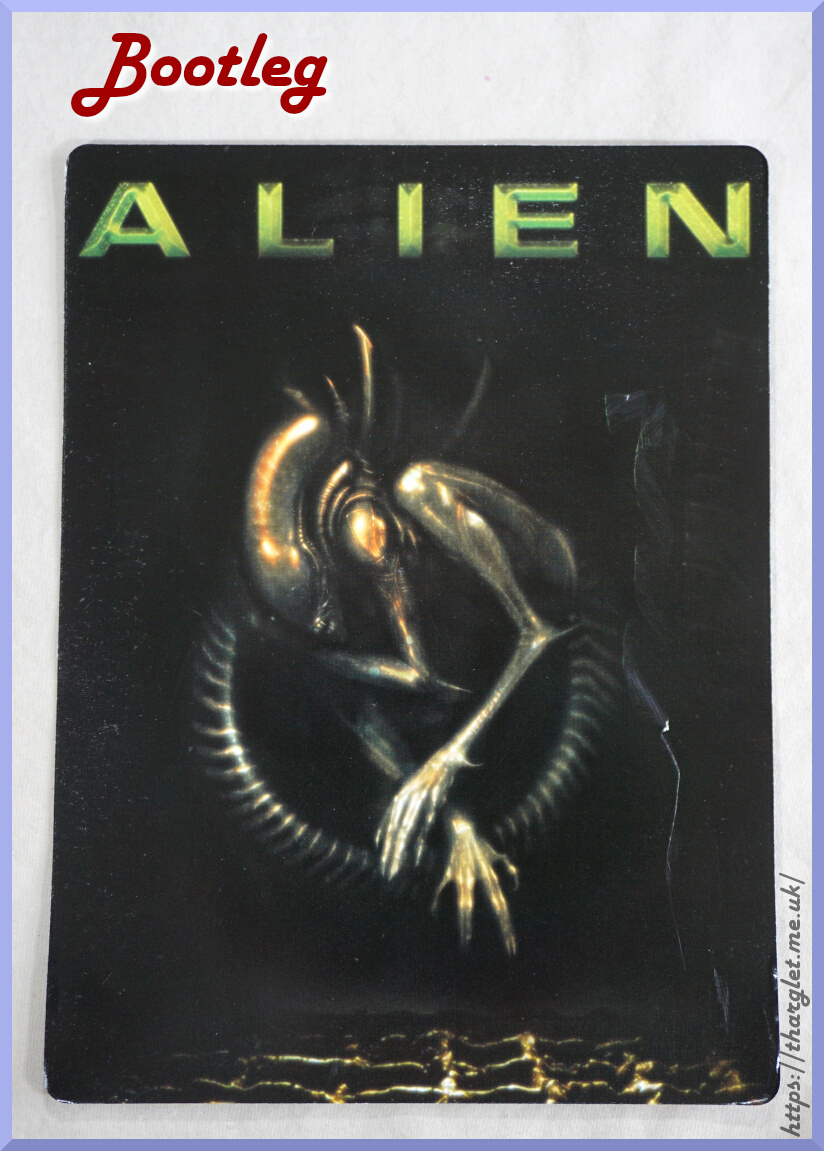 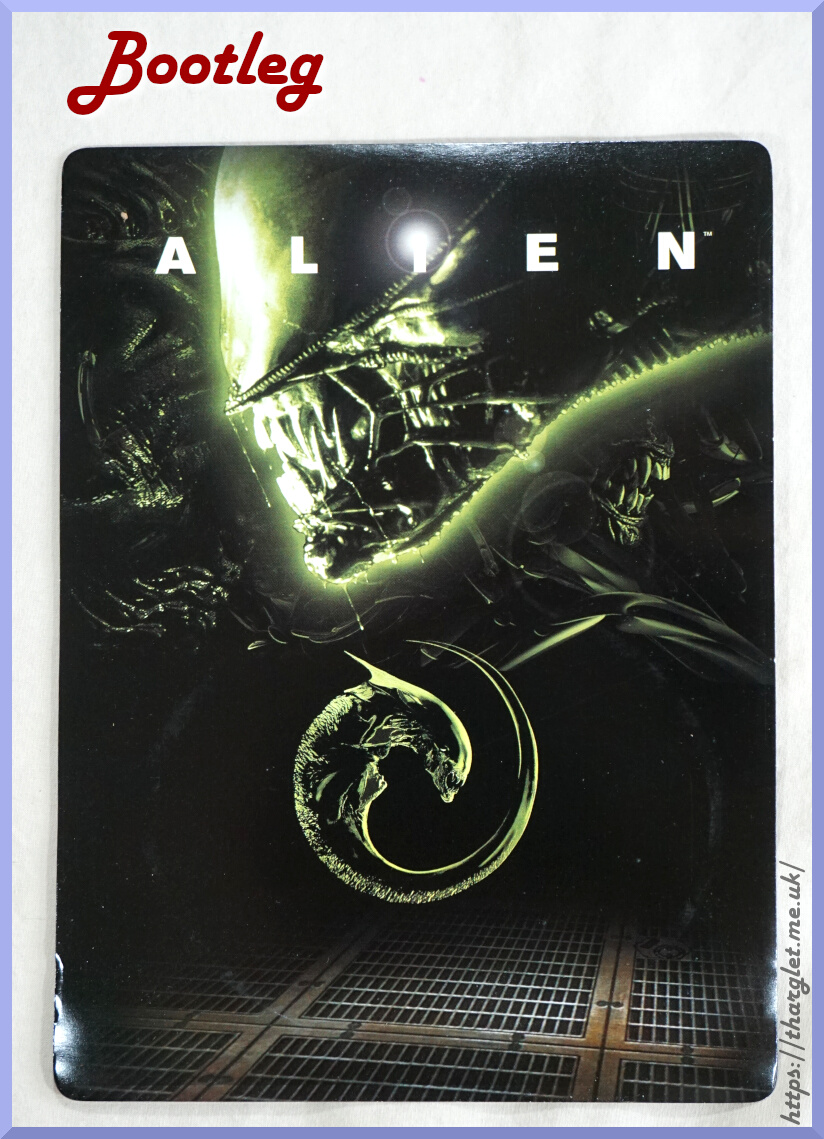 Some bonus artwork on the front cover, hidden by the base! Gotta stack in that stolen artwork. For what it is, it’s decent.

Not too much to explore with this packaging. With it being completely different, it could be easy to mistake for being an original figure of its own. However, with the lack of manufacturer anywhere on the packaging it gives a clue that this is not an official item. 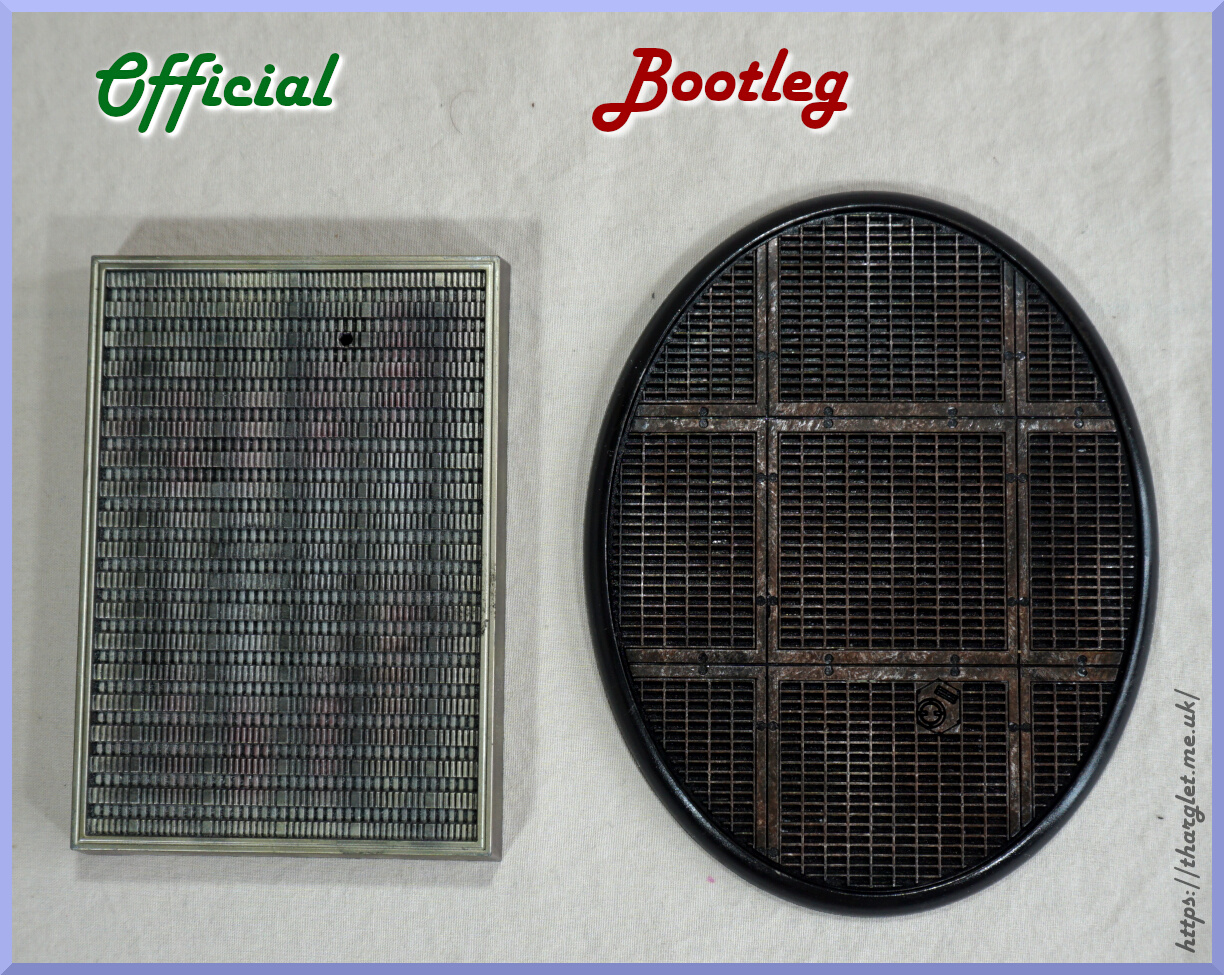 All of the Alien SF Movie Selection figures come with a square base with a grid pattern, as per the example here. The official bases differ slightly with each figure, to provide support for their figures. With the dog alien there is a peg hole to fit the peg on the dog’s foot.
Meanwhile the bootleg base is an oval shape, and a pretty good grid pattern. I expect that this grid base is knocked off of something, but I don’t recognise it personally. For a bootleg base, it is surprisingly nice-looking and I do like this as an alternate base. 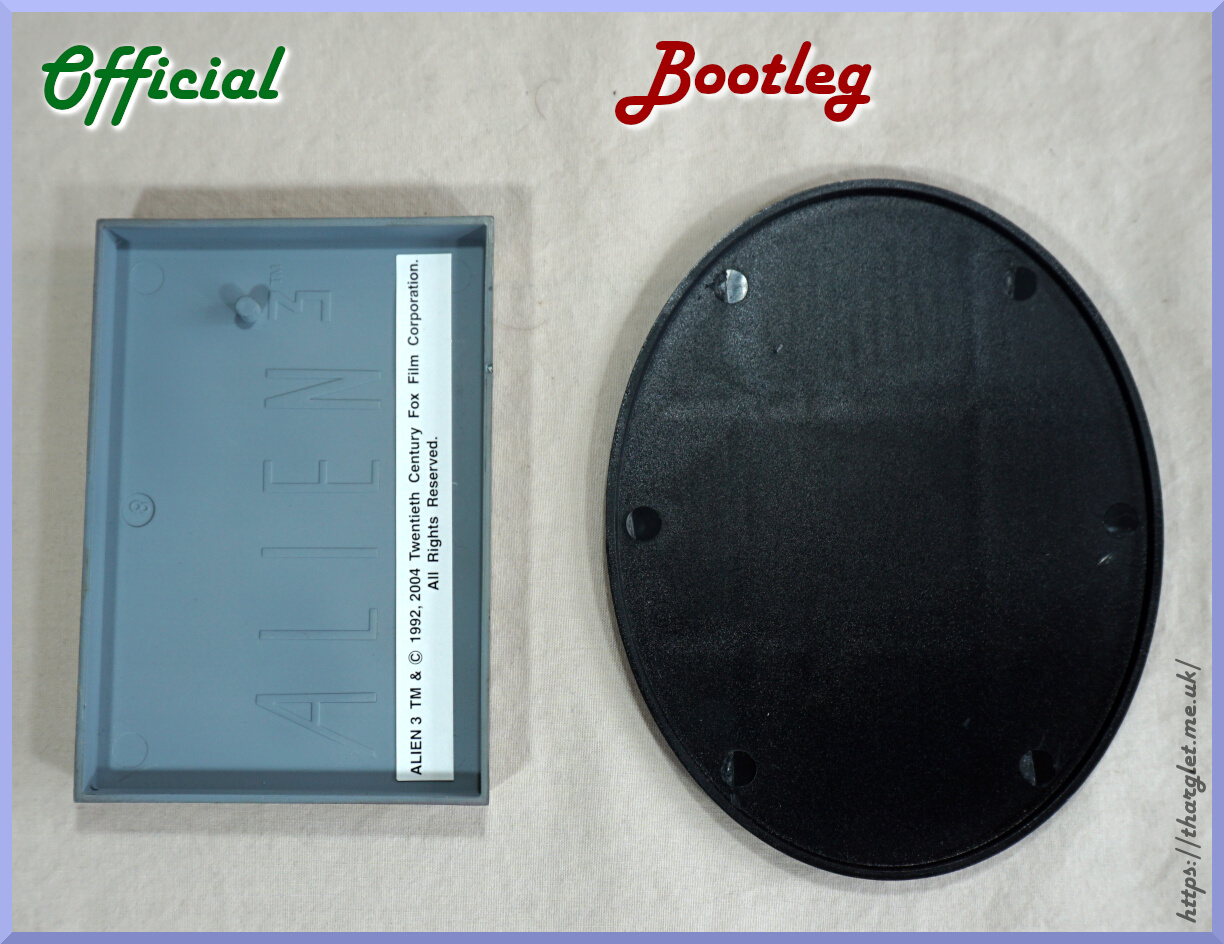 The official has the Alien 3 logo and a sticker with the copyright information. The bootleg has… some mould markings.

The bases are very different and easy to tell apart. But the bootleg is… missing something. Worked out what?
If not, never fear, this photo will make it clear: 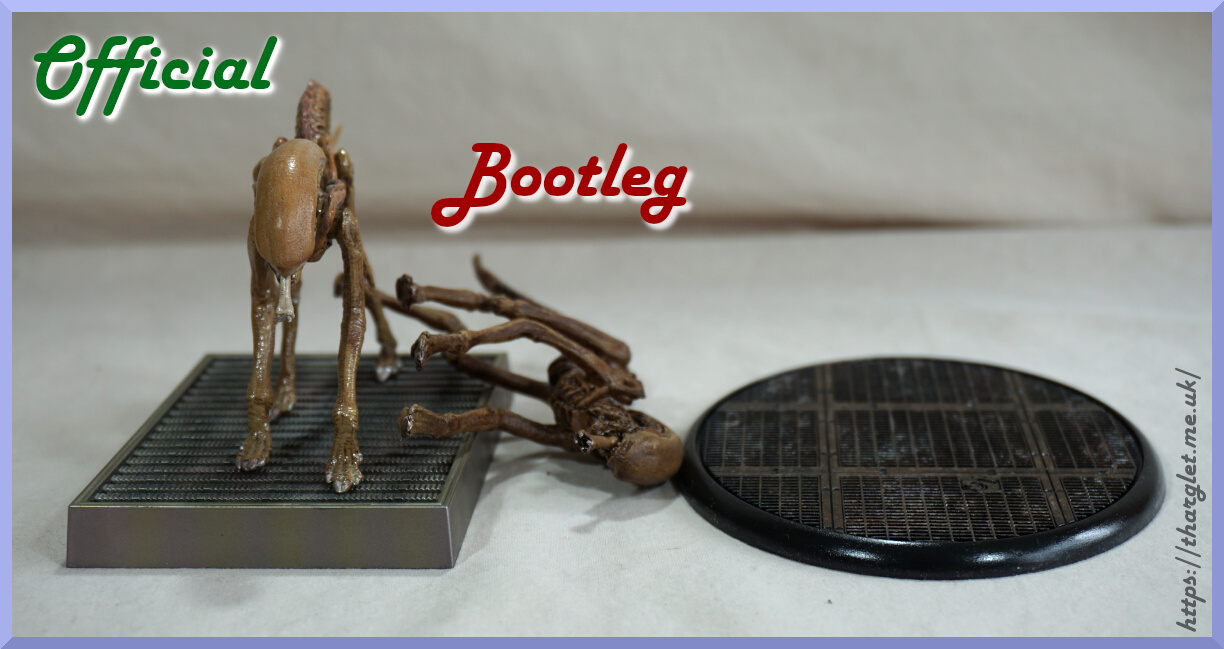 No sodding peg hole. Yeah, might look nice, but it doesn’t have a peg hole to allow the dog alien to stand on it! Not that the bootleg dog alien actually has a peg.
So in terms of functionality, the bootleg base sucks. Maybe if you have a small freestanding Alien figure, this base could complement it. But entirely useless to the bootleg.

As the bootleg dog alien cannot stand on its own, white tack was liberally used to keep him standing up. And he still fell over a few times when taking these photos. Argh. 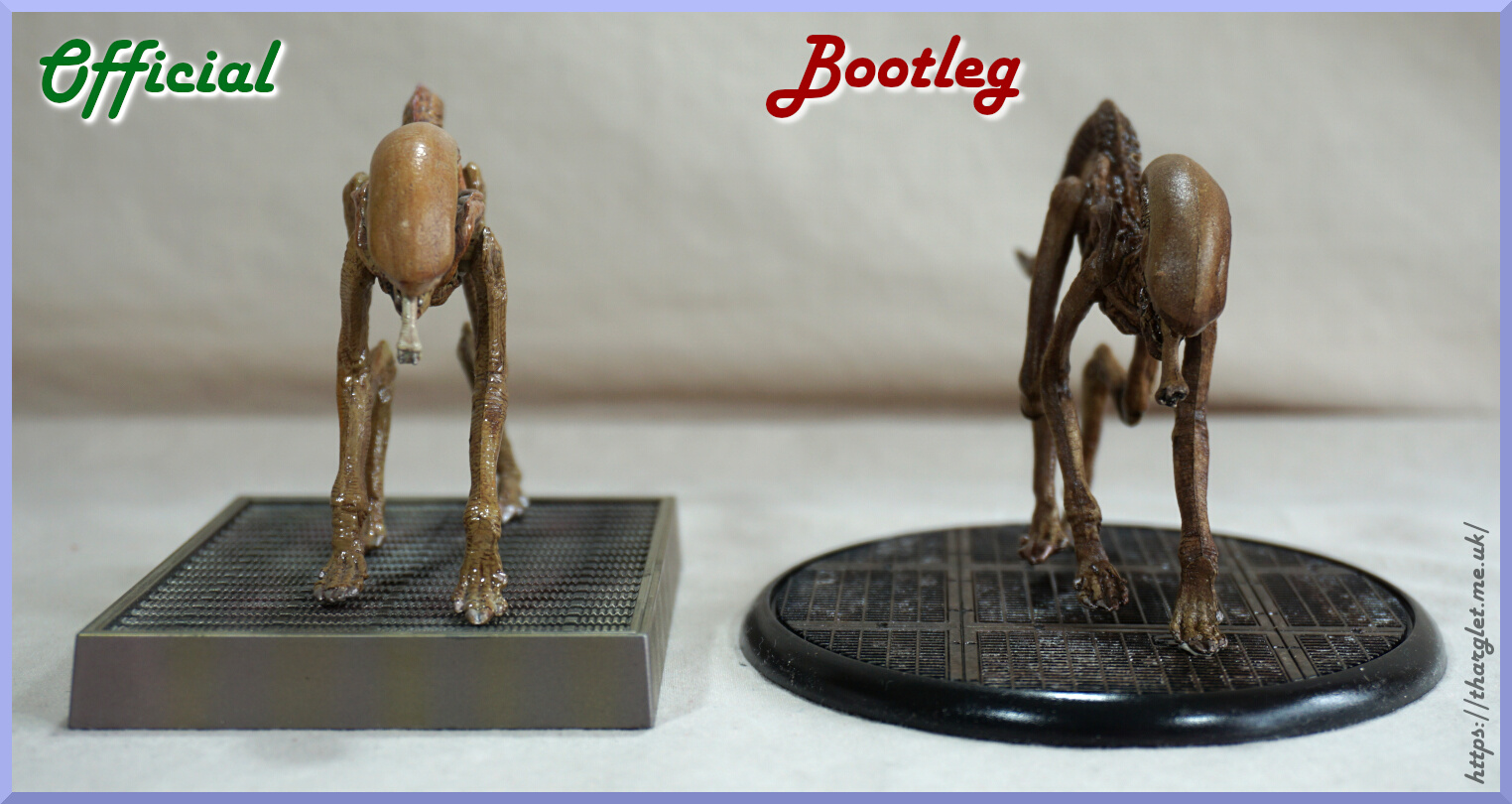 And in the displaying we can see that these two figures are the same mould, only with different paint jobs. In the photo of the back of these aliens, you can see the bootleg leaning… he did indeed fall over after this photo was taken ><.

These figures aren’t very big, so this tour will be relatively quick. We don’t have a face, so let’s start off with the side of the head:

Parts of the official sculpt look less distinct due to the paintwork, but this isn’t a bad thing – the official has a range of colours to emphasise the various sections of the alien’s anatomy. The bootleg’s paint is the same all over, with quite a dark wash over the entirety. Looking to his jaw, the paint differences are the most apparent – the bootleg’s matches the body whilst the official’s is a white colour.
Looking at the bone part above the shoulder, the official’s is a ragged shape and the bootleg’s has been smoothed out, likely to a poor mould.

Top of the head: 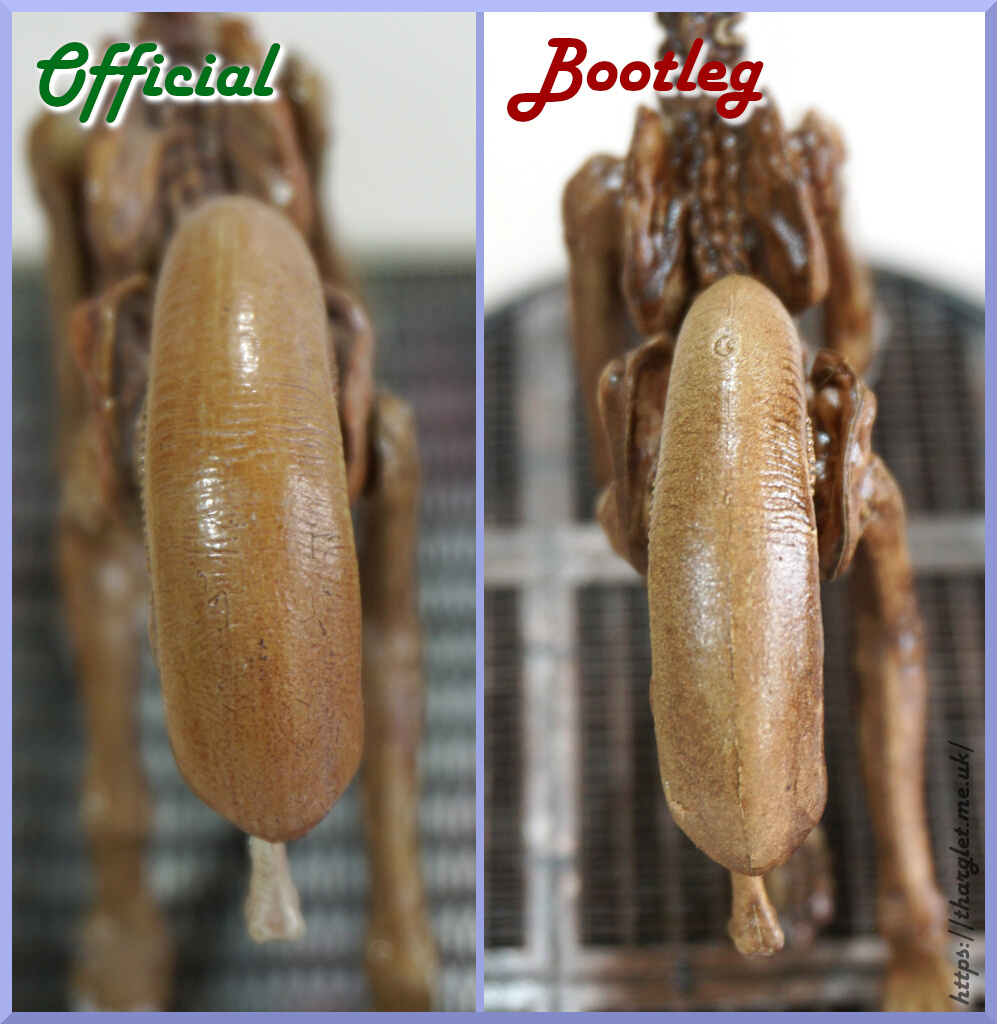 The wrinkly texture is present on both, but more prominent on the official one.
The bootleg head has a seam noticeably running through the middle, and a strange mould mark to the back of it.
The colour of the official is more aesthetically pleasing to me than the pallid bootleg colouring. 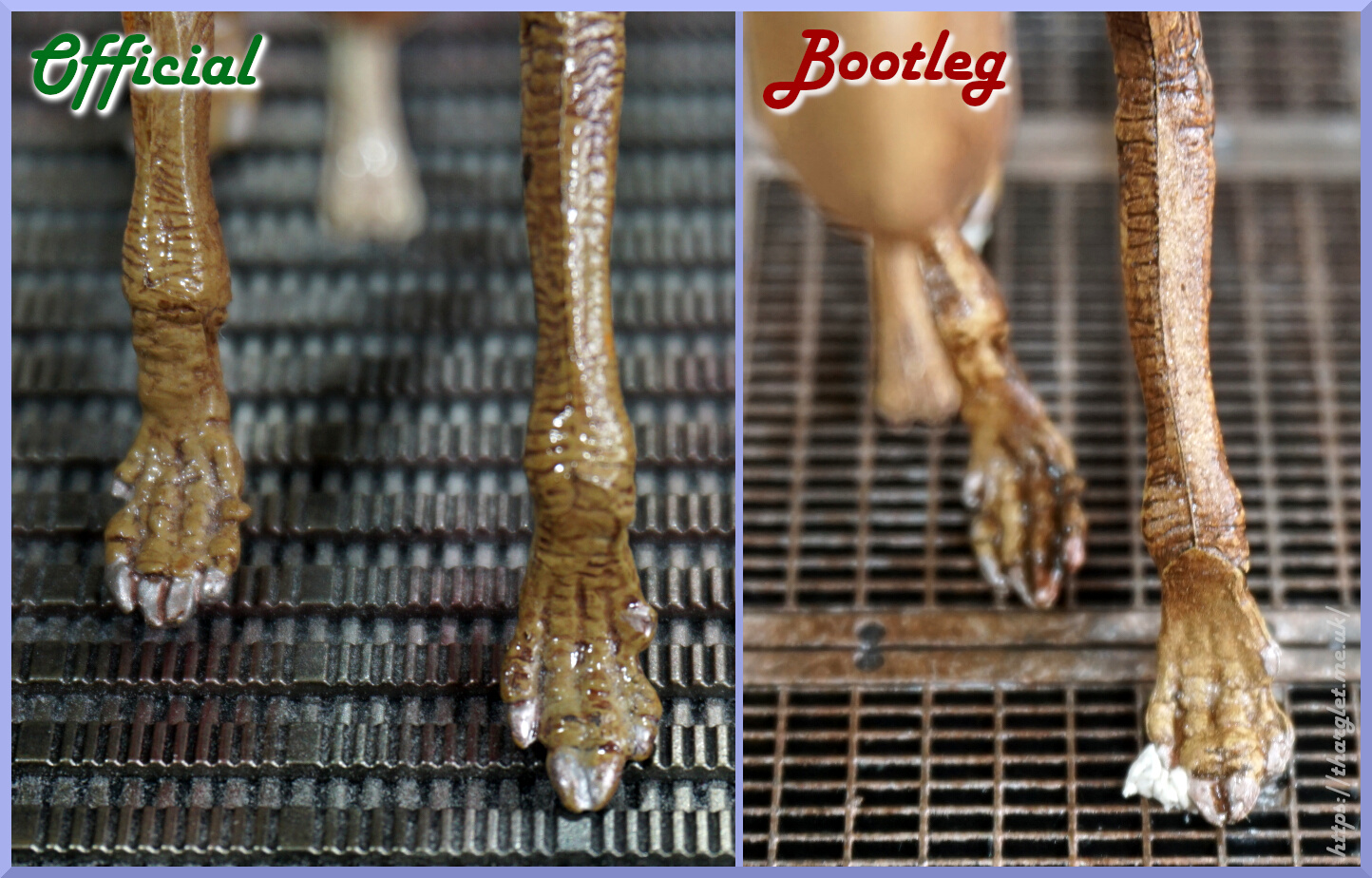 So for a dog alien… are these paws or feet? Not quite sure.
For the official, we have more distinctive colouring and a shiny finish. There are some seamlines visible, but not as visible as they are on the bootleg.
The bootleg’s left foot looks rather stuck on and not very good as it doesn’t match the rest of the leg. The right leg doesn’t fare much better and is curled slightly under the body. We’ve also got a paint mishap on this foot too, where the inner toes are darker.

Top of the body: 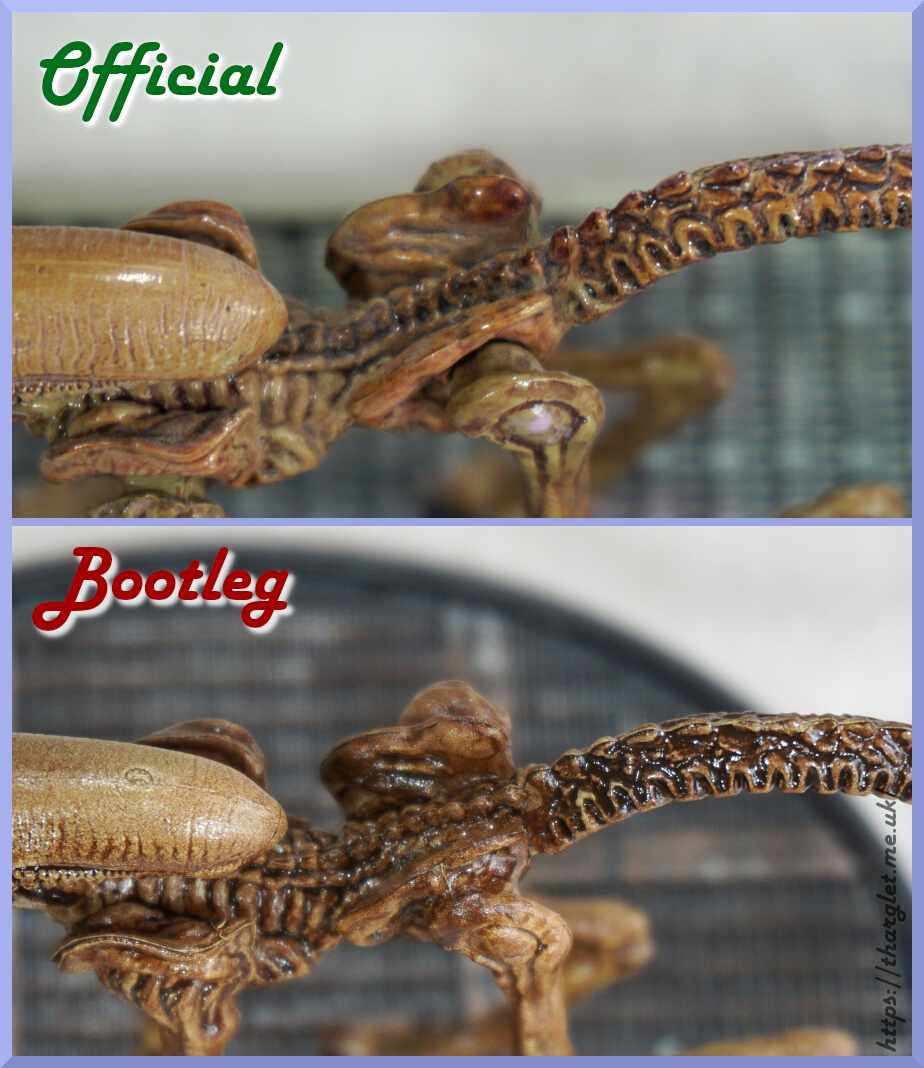 The paint on the official has an extra orangey shade in places to add extra depth. Looking at the spine parts on the tail, the bootleg mould hasn’t come out too well and these parts have flattened tips.
For the official you can see where the legs are separate parts, but the bootleg has been attempted to be moulded as one piece.
The bootleg’s tail side almost looks like a treacley treat. Or maybe marmite? 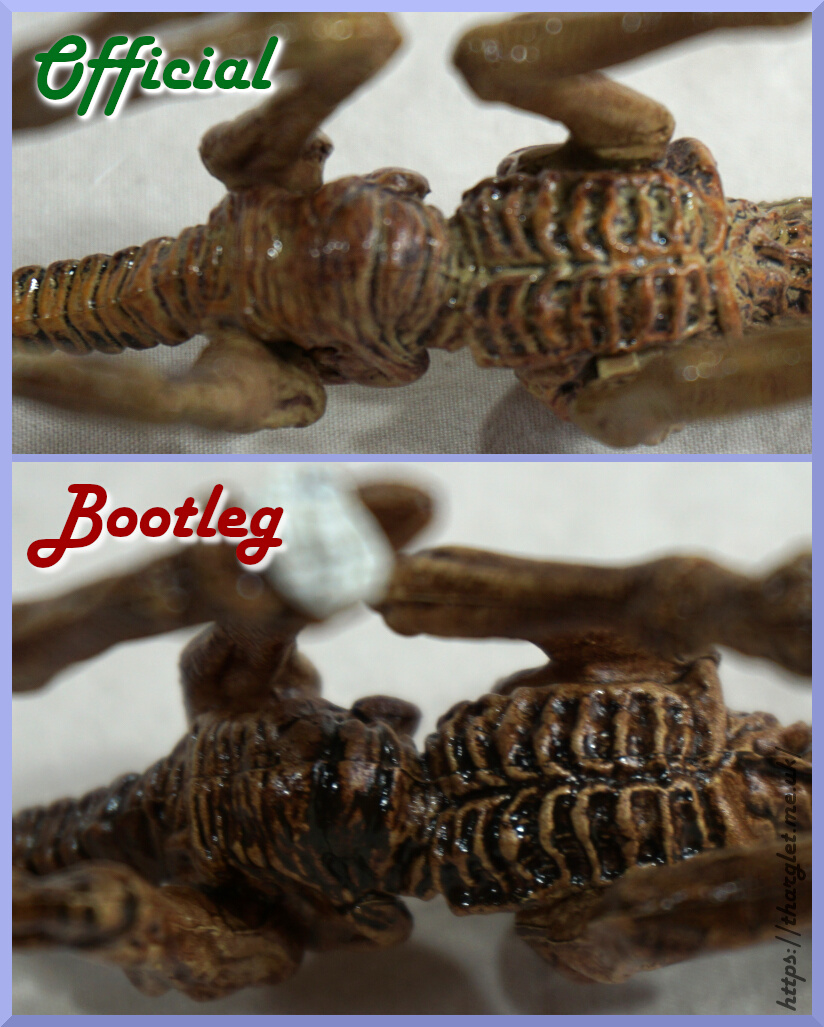 Again, we have the orange highlights on the official and the more marmitey appearance on the bootleg. Love it or hate it? Answers below!
The bootleg’s seamline is definitely visible here, with the paint highlighting its existence. The official’s is only really visible when we look at the tail. 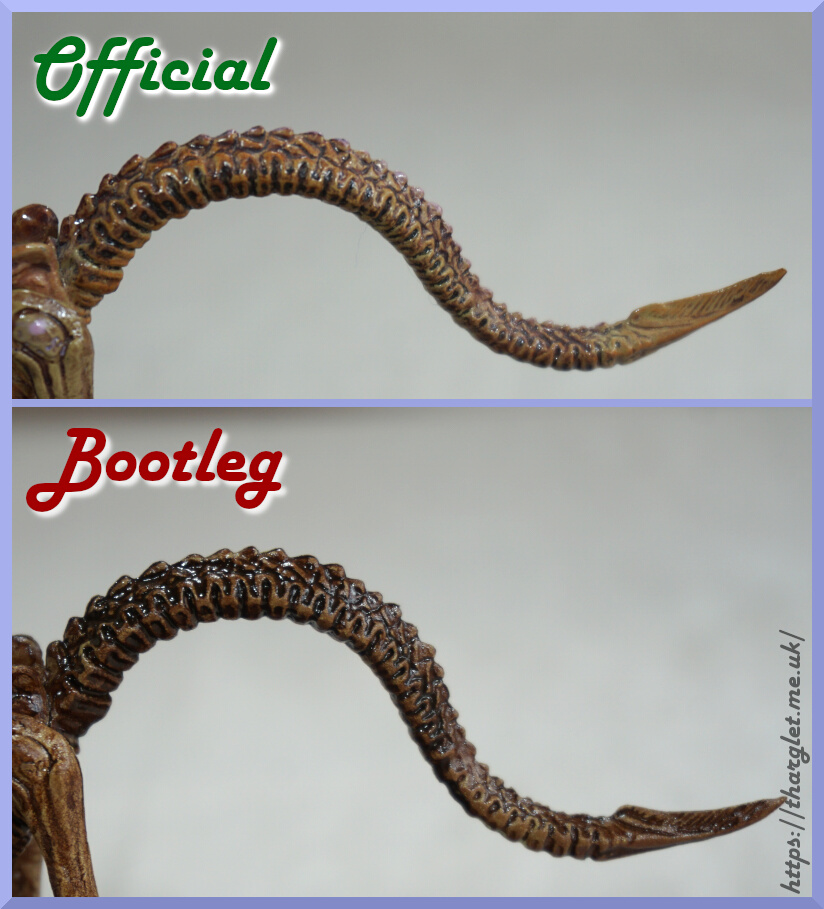 The official’s tail has the orangey paint create a shading effect, but does suddenly terminate near the end – would’ve been nice if this was all the way to the back of the tail tip.
The bootleg does have a section of less colour, but it’s slightly less effective. The heavy-handed wash goes all the through, including the tail’s tip.

Again, the colour differences between the legs of the official and bootleg are pretty distinctive.
The bootleg’s feet are distinctively paler than the rest of its legs, and the silver paint hasn’t been applied too well.

Back leg, not attached to stand: 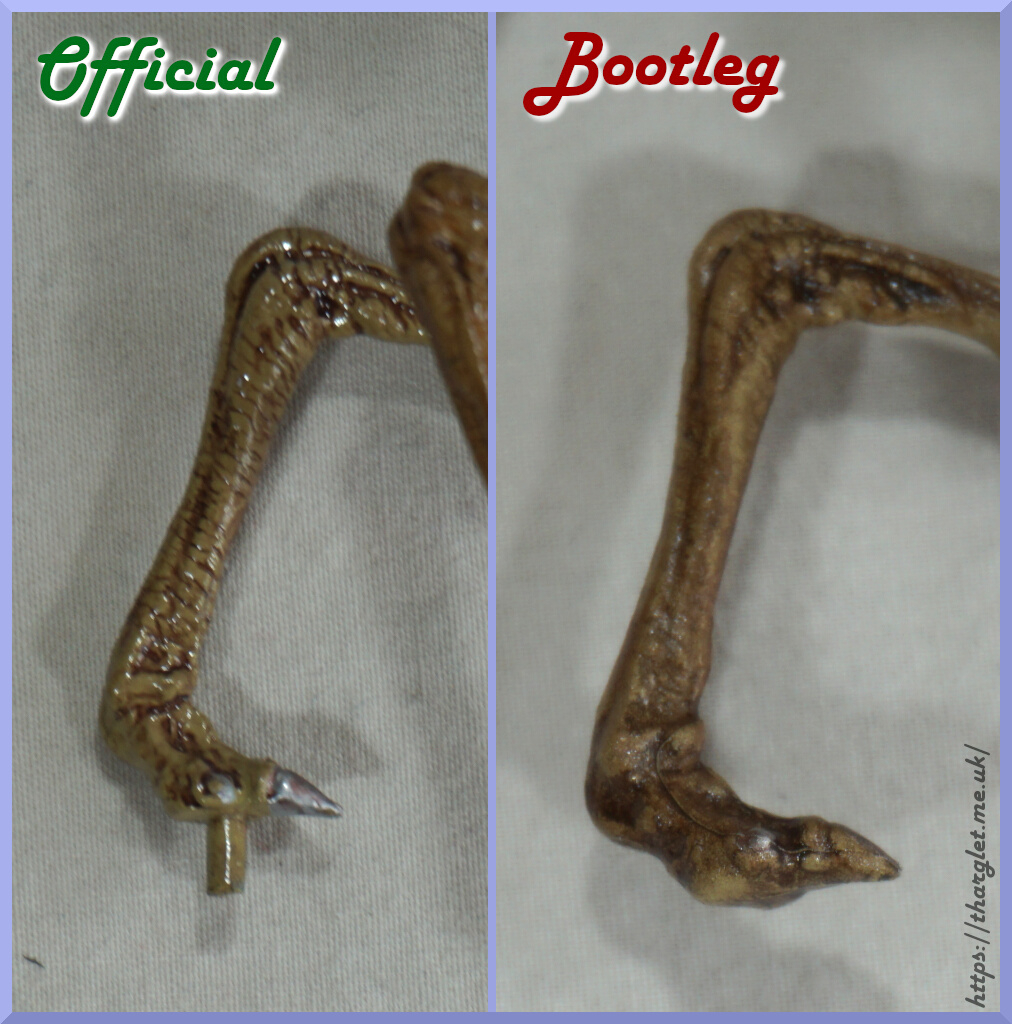 Aand this is why the bootleg won’t stand up on its own – no peg!
Looking at the rest of the bootleg’s leg, we have some extra smoothness in the middle of it and we can see where the front of the foot attaches to the rest of the leg. And some missing silver paint on the toes.

We can tell which one is the official here easily… One’s branded property of FOX, the other… nothing. Free range xeno! A big clue the bootleg one is indeed bootleg.

This bootleg and official might be hard to tell apart if you’re not familiar with this set of figures, however the lack of any method to attach the bootleg to its stand may give away something isn’t right. I could definitely see someone buying the bootleg in its blister and thinking they have purchased an official product. A more wary collector would notice the lack of text on the box though and possibly the slightly dodgy printing.
Comparing them side by side, it’s pretty easy to tell which is which especially if you have the bases.
I could see a casual collector being happy with the bootleg figure and the stand separately, but as a combination they don’t work together, which I’m sure has confused and disappointed people who have purchased this bootleg. Won’t be surprised if someone out there has glued the bootleg to its base just to get it to stand – the bent legs make it near-impossible to stand. Even if the legs were evened out to maybe stand, the feet are quite small, making balance very difficult.
As far as small figure bootlegs go, this one is much better than the other ones I have previously covered, but definitely has its flaws.