Time for the second of the Alien trading figure bootlegs! Chestbursters aren’t exactly complicated in shape, so this review will be a short one.

The official I bought from eBay

The bootleg in its blister: 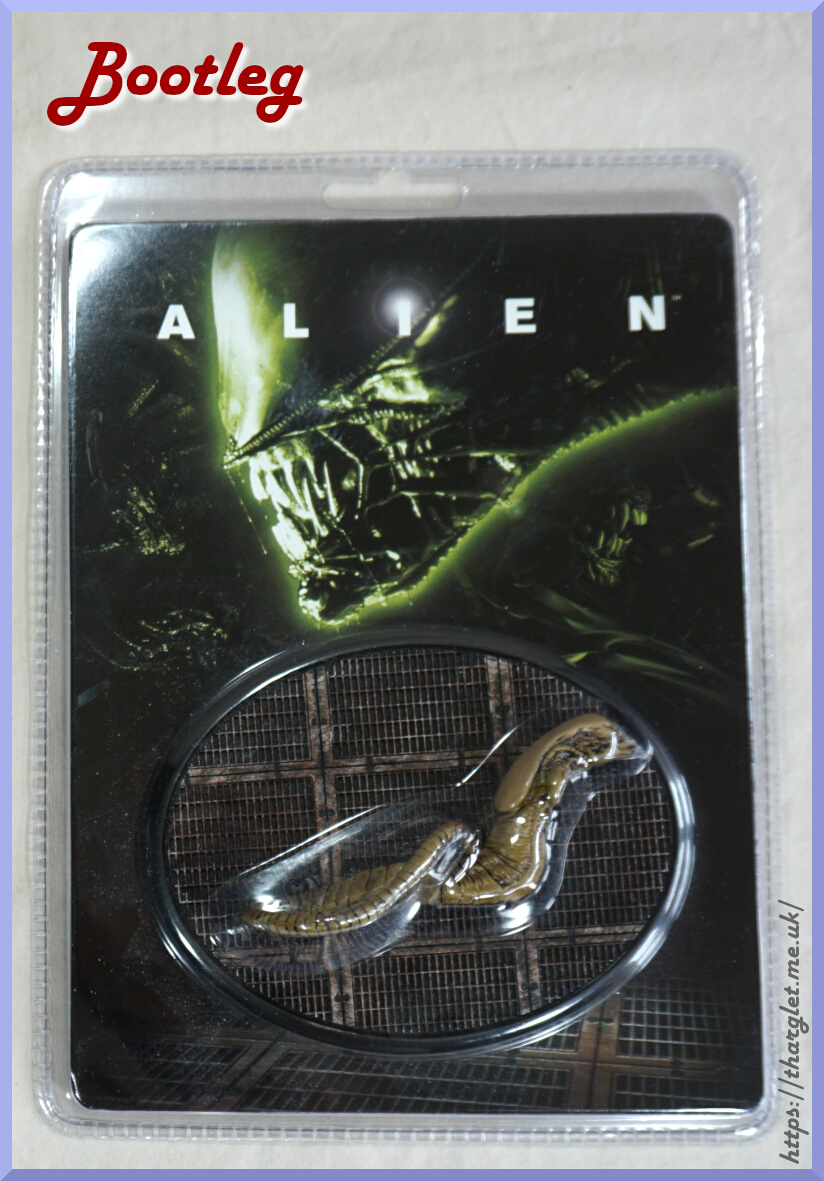 This one has been packaged in the same way as the Dog Alien bootleg, with the figure on top of the oval base. Feels like the contents are at a slightly jaunty angle, but quite a nice presentation method.
For the rest of the packaging it is the same as the dog alien, so you can read more about it in the Dog Alien article. 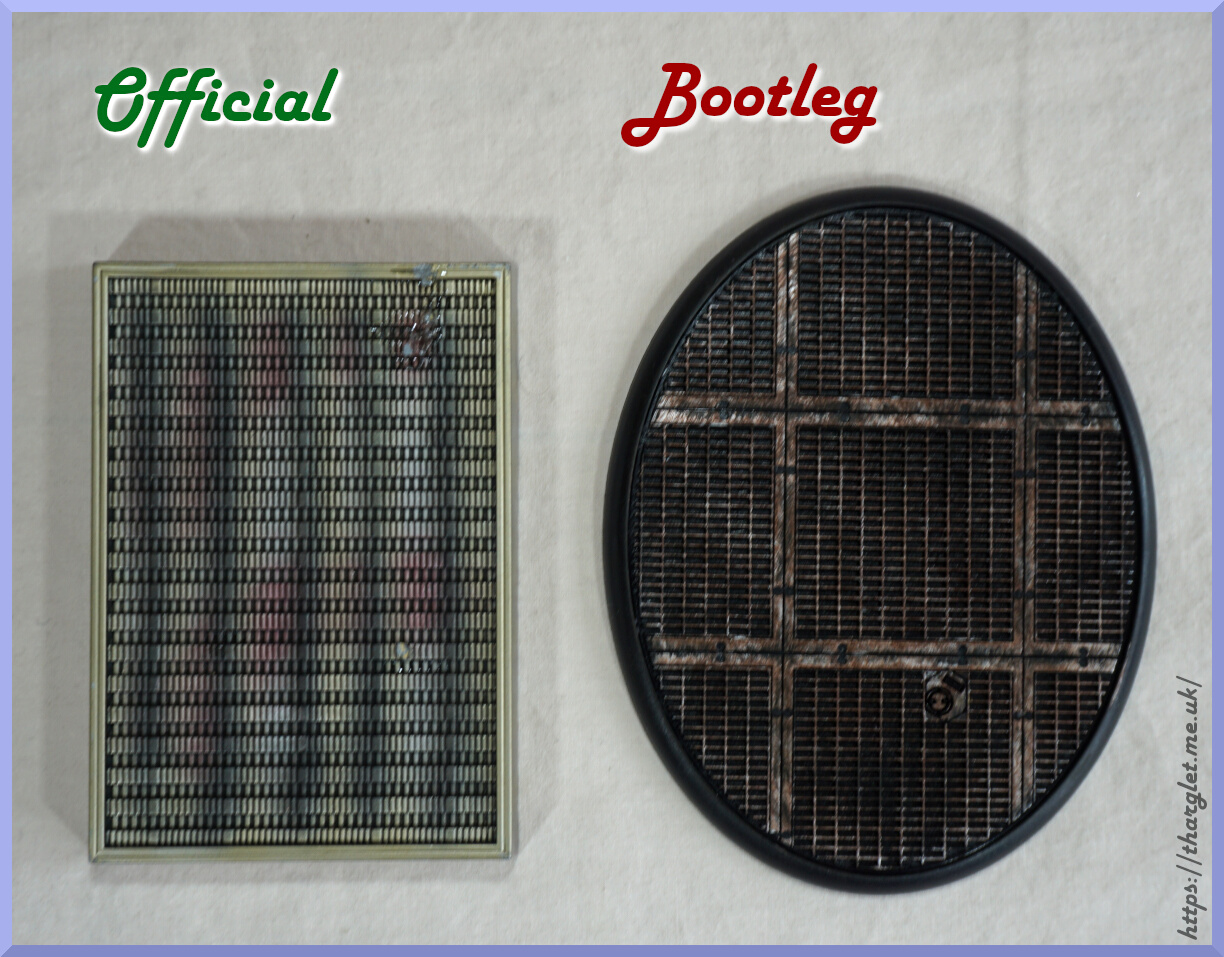 As with the Dog Alien, we have the rectangular base for the official and the oval one with a different floor pattern for the bootleg. This time, neither base have pegs as the chestburster will stand on its own.
At the top of my official base you may notice some remnants of glue – this was from the previous owner who glued the chestburster to the base as apparently it didn’t stand up well enough for them. Not long after owning it, I did pull the chestburster off of the base, and personally haven’t had issues with it falling over. 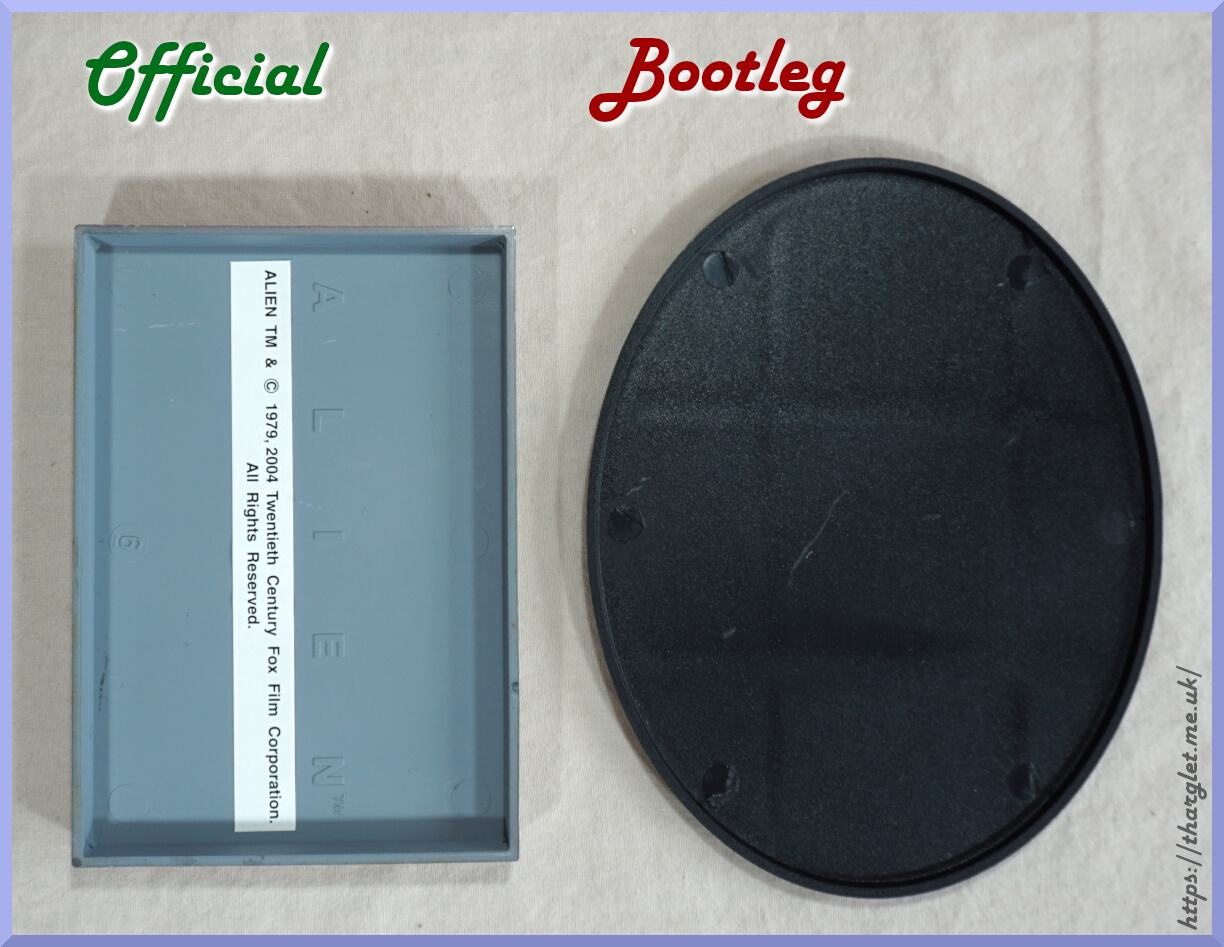 On the bottom of the official we have an ALIEN logo and a copyright sticker. Bootleg one we have some mould marks and a scratch. 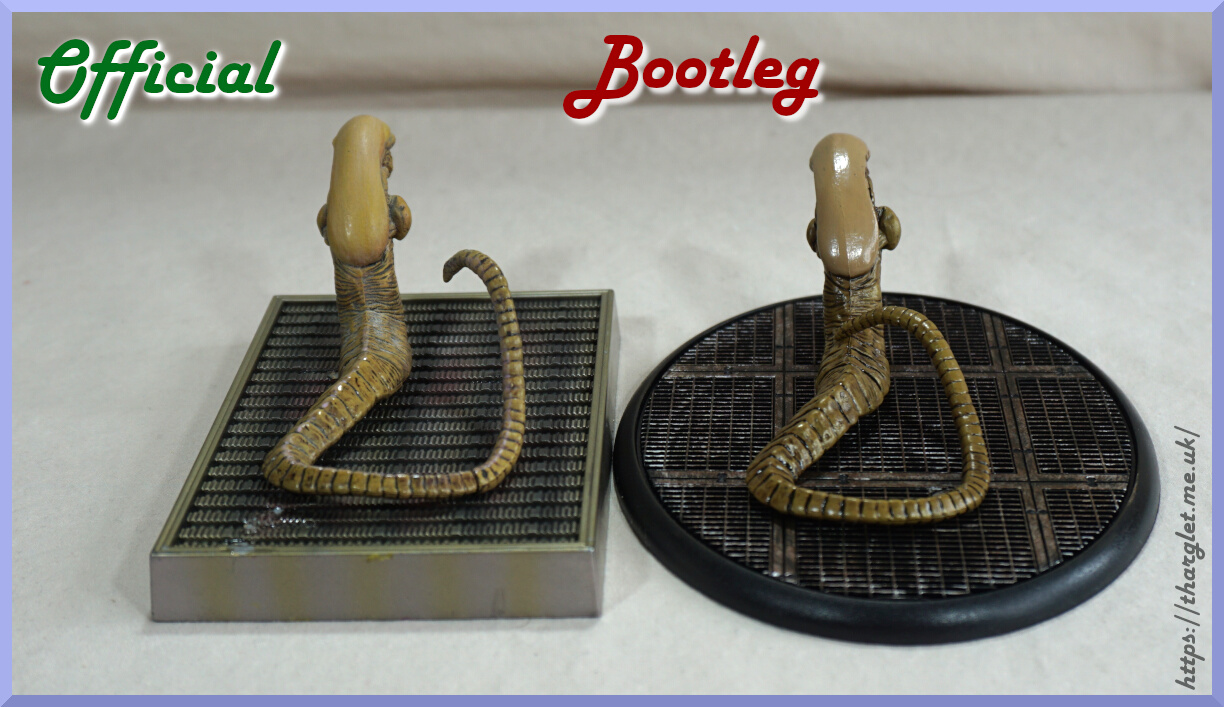 The colours and bases vary noticeably, as well as the curvature of the tail. The bootleg’s tail doesn’t curve as high and touches its body. 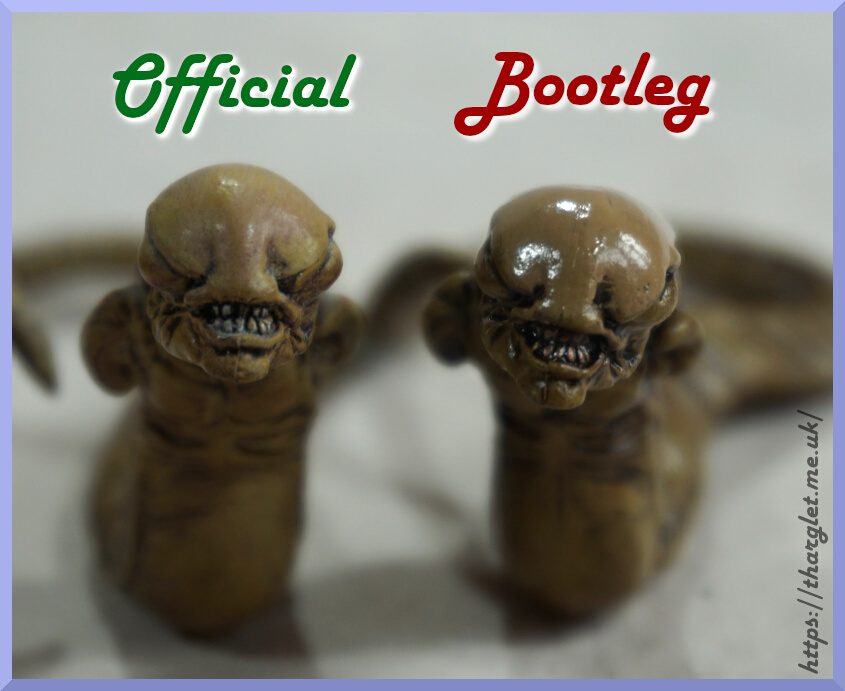 A face only a mother could love… For me, the bootleg manages to look even uglier with the crooked head, the paint job on the teeth and extra darker areas near its “eyes”.
The official we can see one seamline on its chin but for the bootleg, the seam clearly runs all the way up to the top of its head. For some reason, the bootleg’s chin seam is further to its right and the parts also don’t align correctly.
The bootleg’s forehead is much flatter in terms of colouring and has a shiny finish.

Side of the head:

The mould has mostly survived intact for the bootleg, but the dark wash is more like it has been dunked rather than washed. We’ve also not got the different shades of brown making its details look flatter.
The dome paint edges are rather sloppy on the bootleg and looks rather odd to me.

Top of the head: 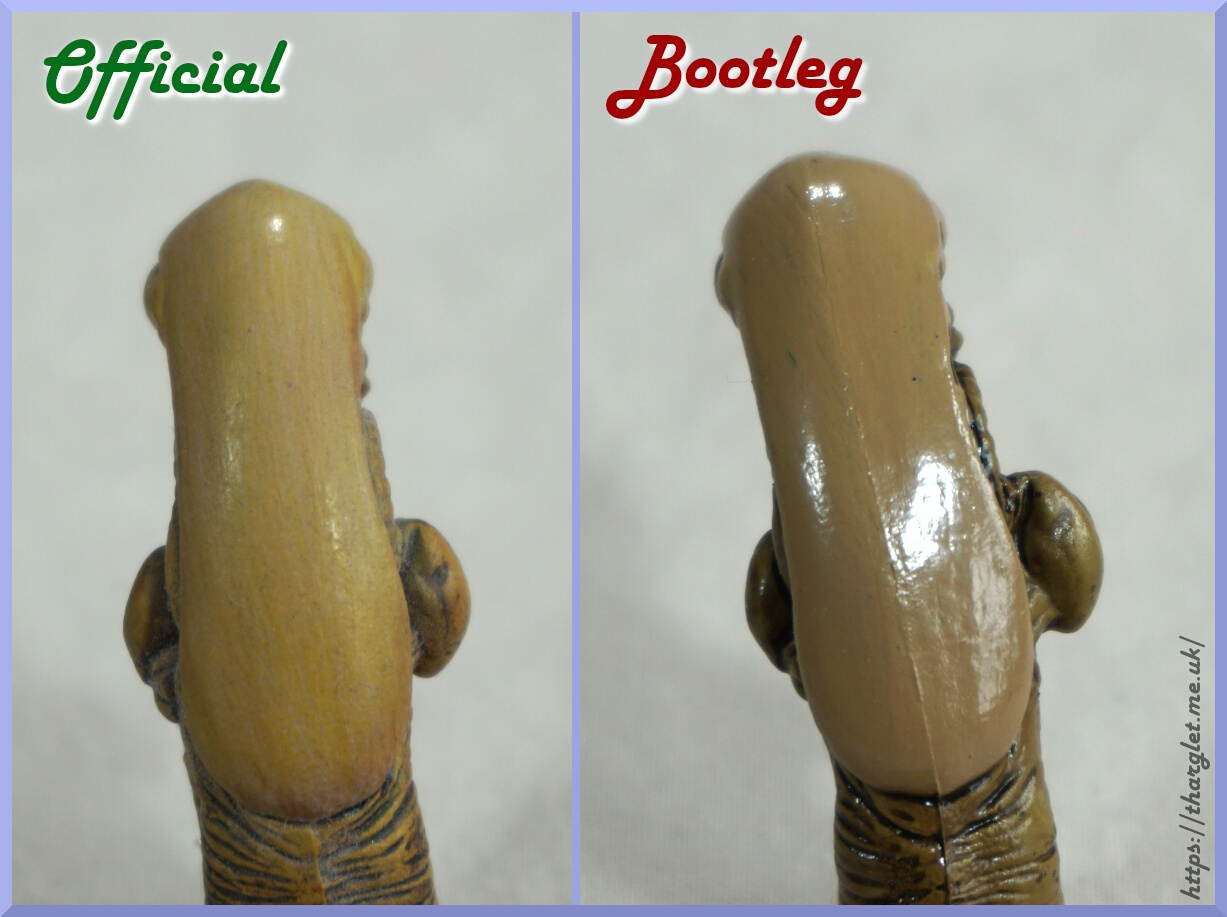 Underside of the head: 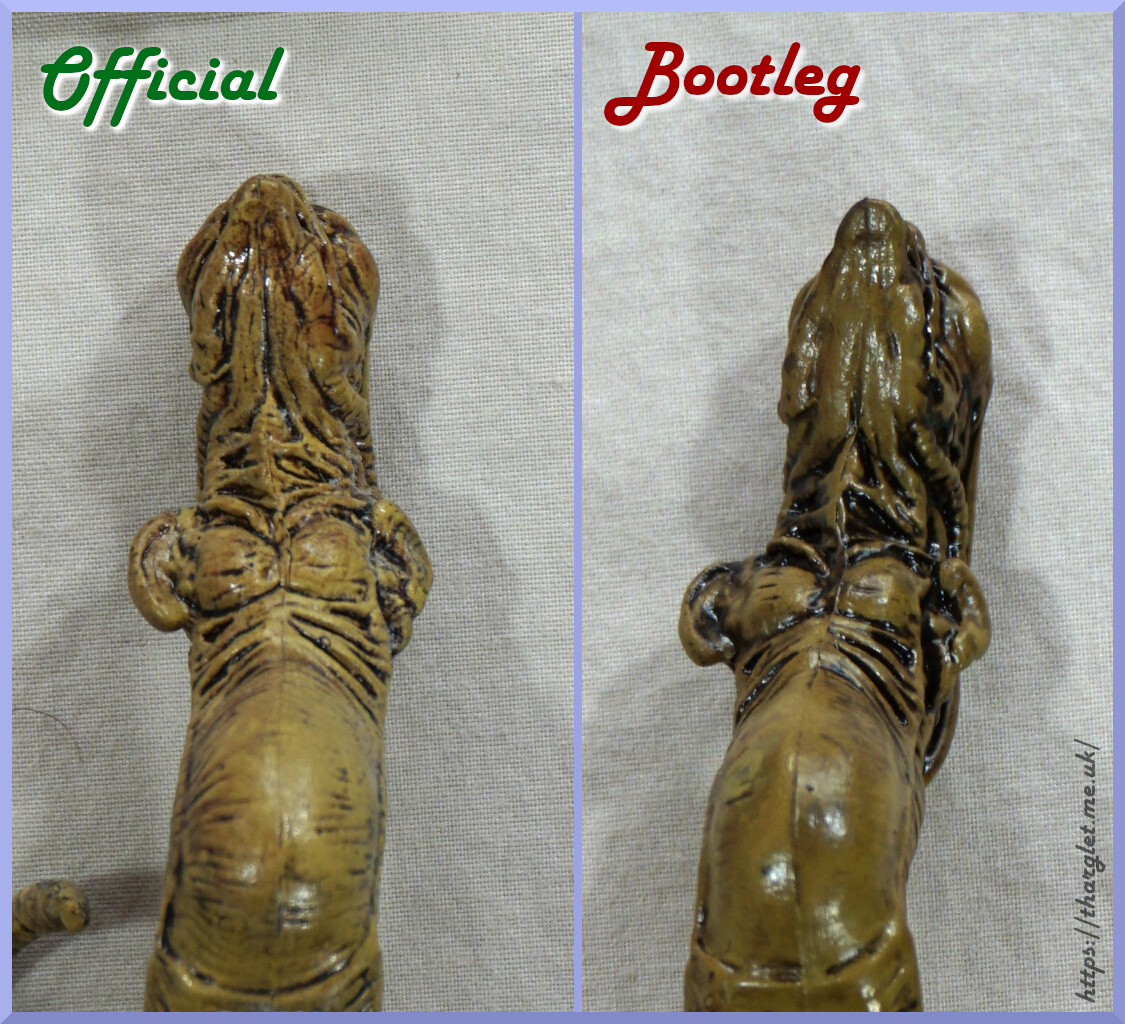 Here the bootleg’s overly enthusiastic black wash manages to hide much of the detail. Some of the cast isn’t as distinct, but I think the black wash is doing a fair bit to hide the detail too.
The bootleg’s body colour is really off of what colour I imagine a chestburster to be as well. 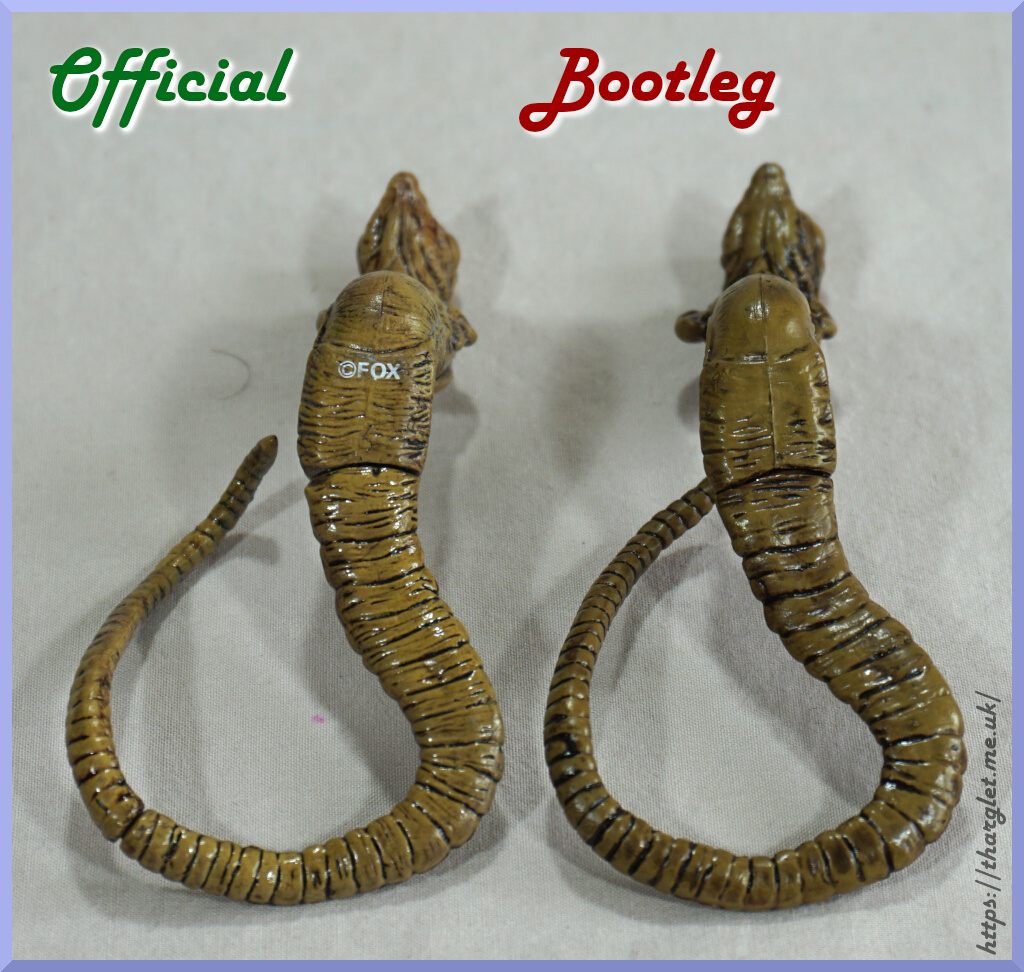 The official has a “(C) FOX” stamped on it, showing this to be the officially licensed product.
The bootleg has no such notions, and some of the detailed linework has been lost.
The bootleg’s seam in its upper body is much more noticeable than its official counterpart, not helped by this area being smoothed for some reason.

The bootleg’s black wash isn’t quite as overenthusiastic on its tail, so isn’t as off-looking on this end.
The tail’s pose however is not very good, and lacks the mildly threatening pose of the official. With them side-by-side, the bootleg’s kind of looks sad. 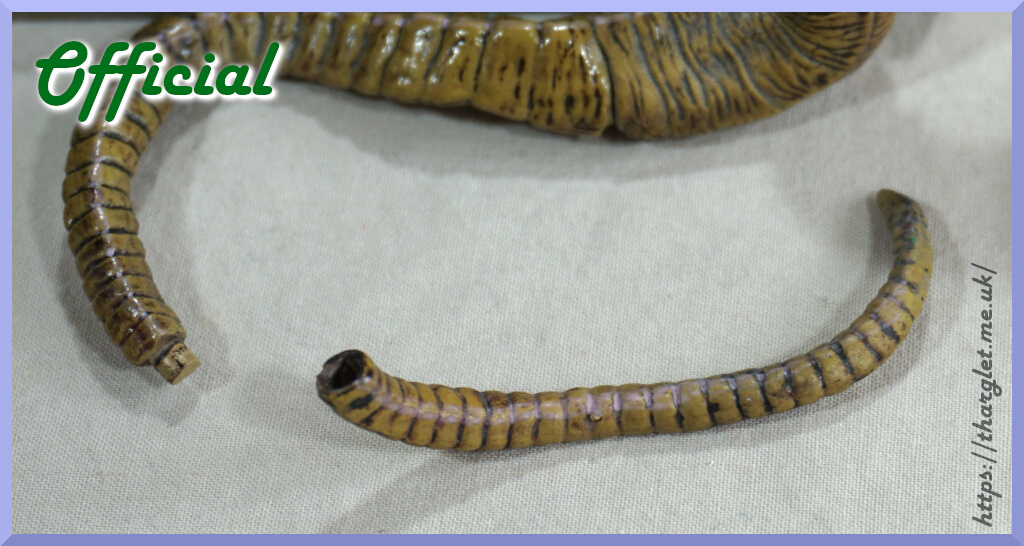 The official is actually three pieces to help it fit into the oblong blind box. Here’s the end part separated – it also separates at the “U”-shaped area visible in the underside shot. The bootleg has been moulded as one piece, which does have the advantage of no visible join.
If you look closely at the underside of the bootleg, you can see where this joint should be as there is a slightly wider black band where the parts have been moulded together.

Telling these apart with the boxes is easy – the official is blind-boxed, the bootleg isn’t. Very clear-boxed in fact.
Without the box, the base is a dead giveaway. Without the base or the box, the fact the bootleg doesn’t disassemble nor have “FOX” stamped onto it gives the game away if the paint job doesn’t.
As far as the bootleg’s quality goes it’s OK. The paintwork and visible seams does let it down, but at least this one is displayable, unlike the dog alien.