This figure I purchased for my collection as I love the purple-blue colouring of her hair. When a bootleg popped up for this one, I just had to get it to see how it compared.

The official I proxied from Otamart via From Japan

I don’t keep the boxes for my prize figures, so don’t have a box to compare. Due to this, I also bought the bootleg boxless. So straight onto the box contents! 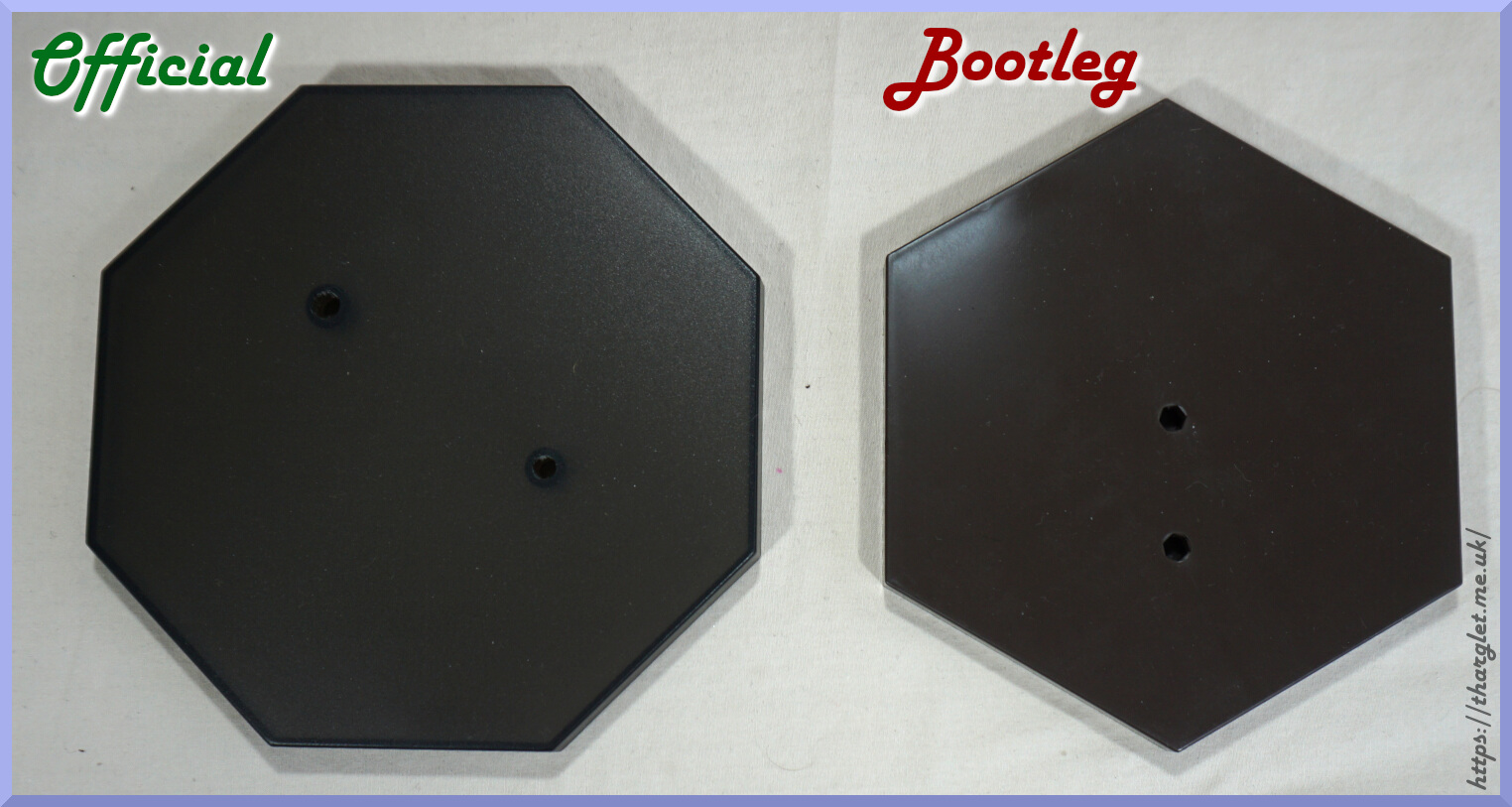 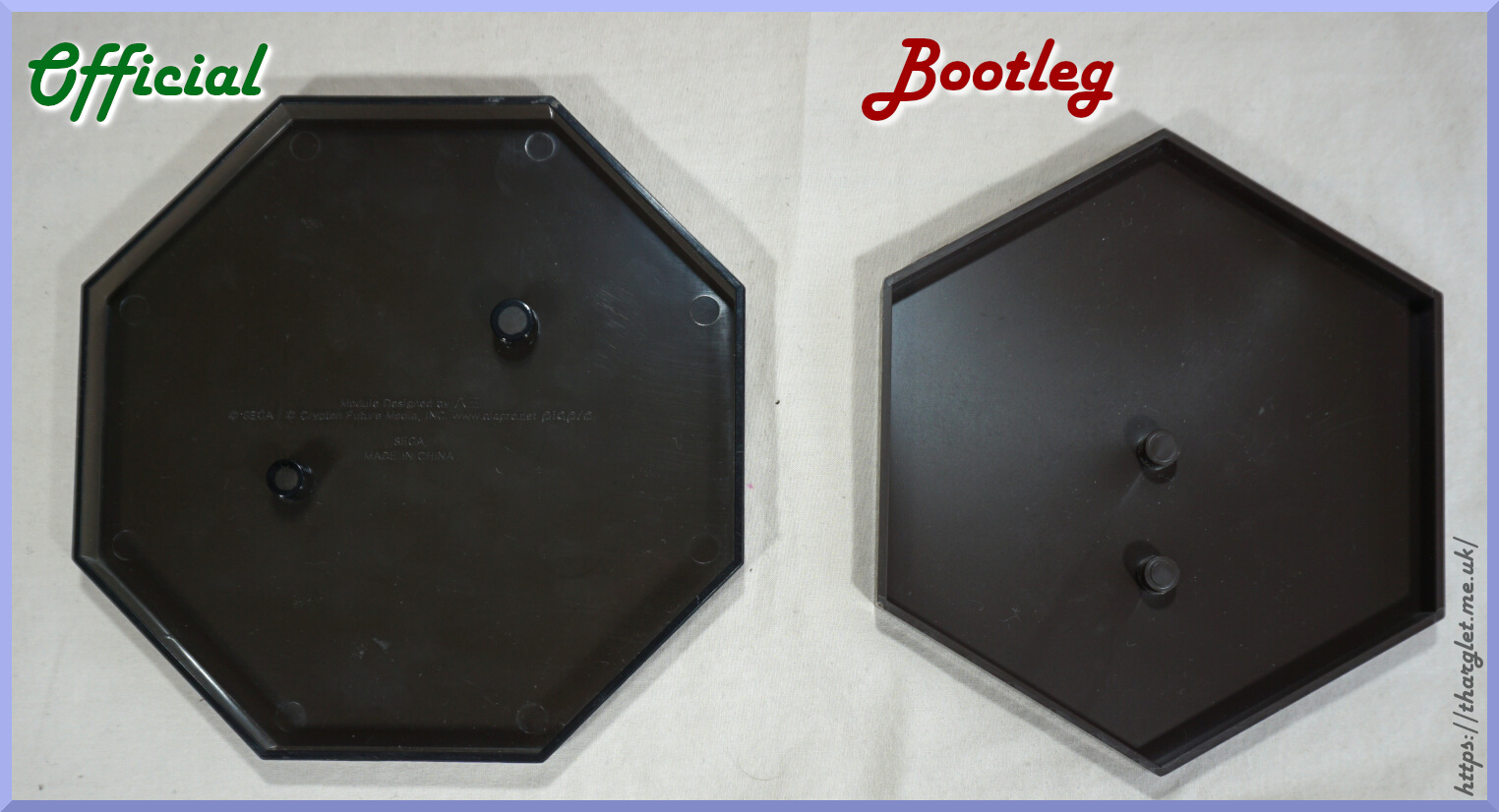 The official base has the usual copyright and manufacturing information, whilst the bootleg is entirely plain. Not even the usual injection moulding marks to see here.

The base makes it easy to tell if the figure is bootleg or not – different shape, colour and hole positioning.

This figure doesn’t come with any accessories, however to get her to fit in the box her pigtails are separate. So let’s take a look at those. 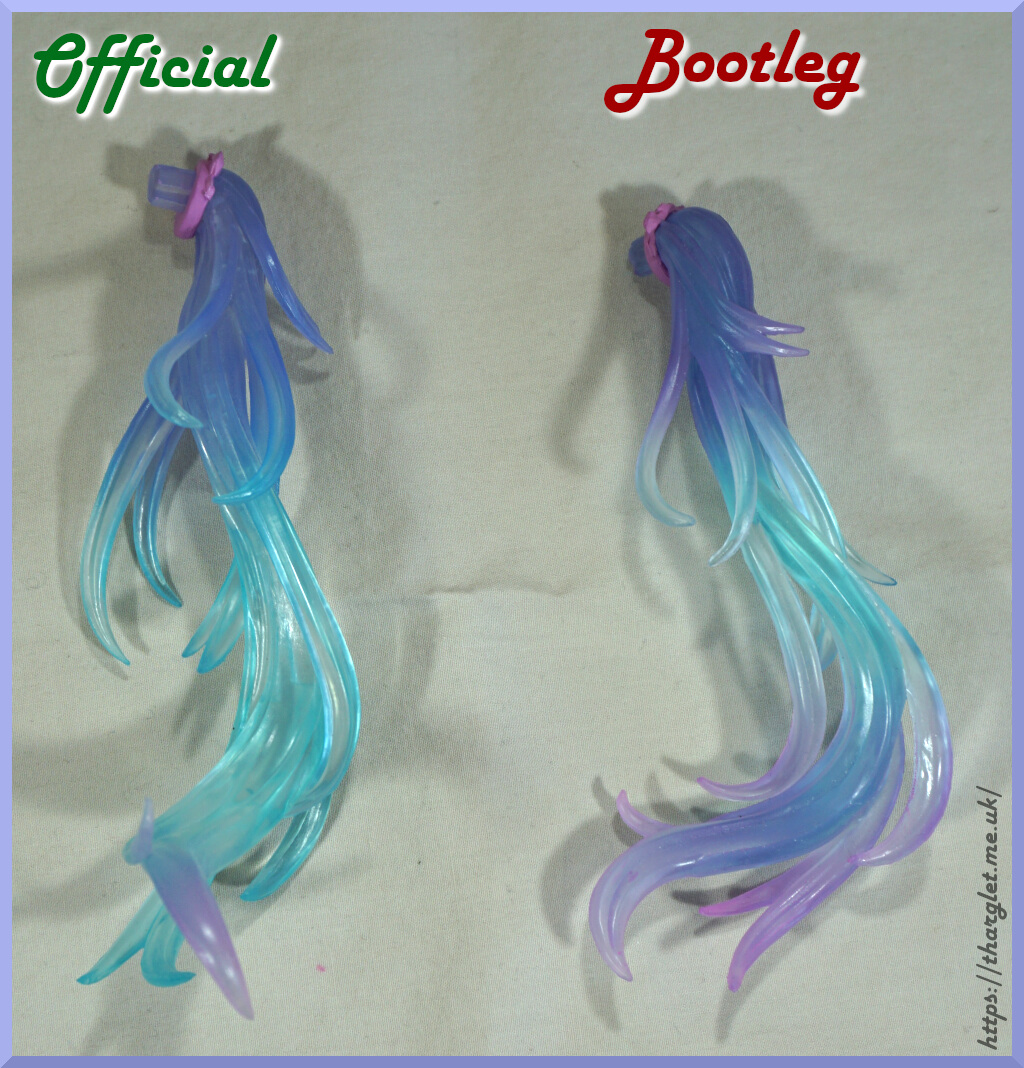 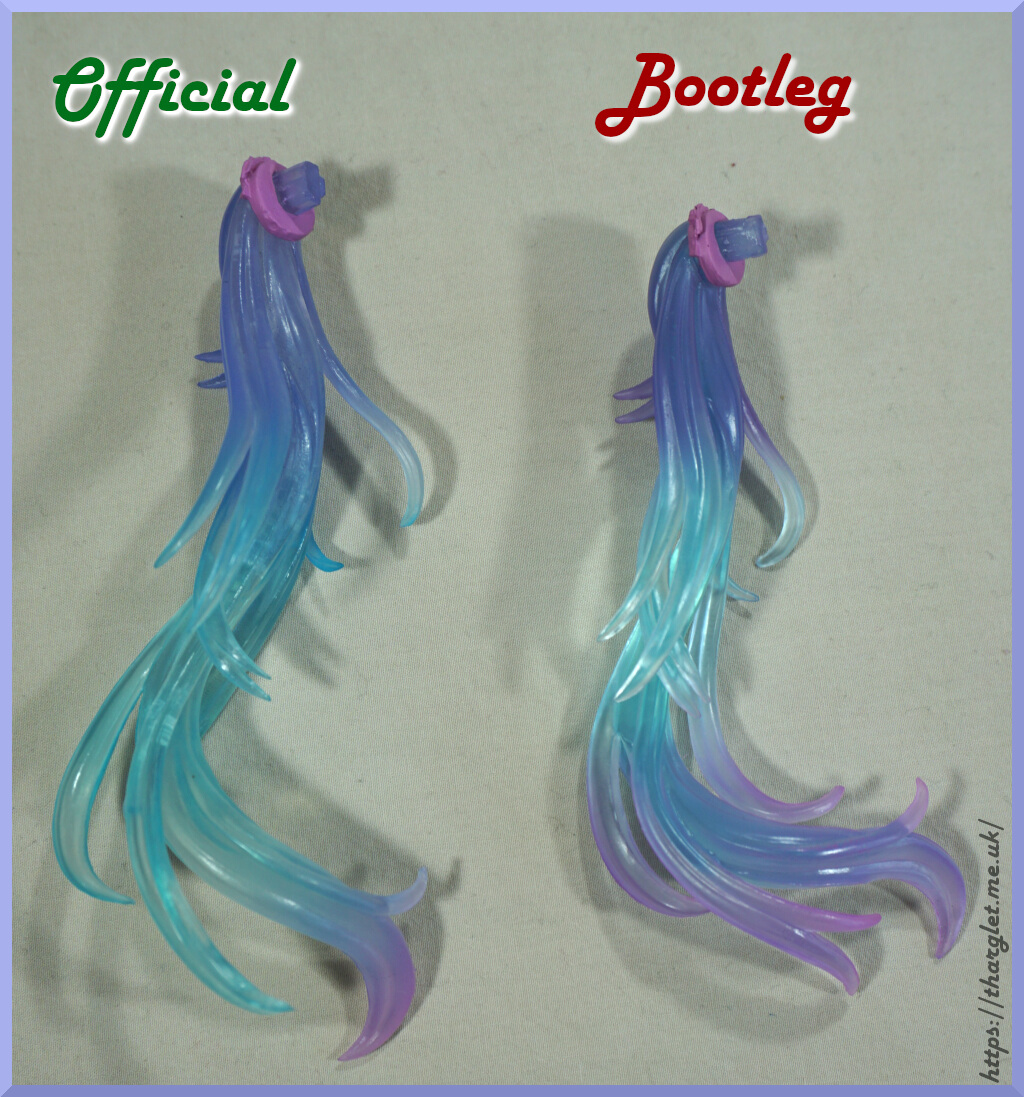 You can see all the shapes are there for the bootleg, but some of the hair curls differently – especially at the bottom.
In terms of colouring, the light blue is lighter on the bootleg but the darker colours are darker. We’ve got more light purple tint in the upper half of the hair than the official.
Looking at the hair tips, the bootleg’s hair is more rounded at the ends. 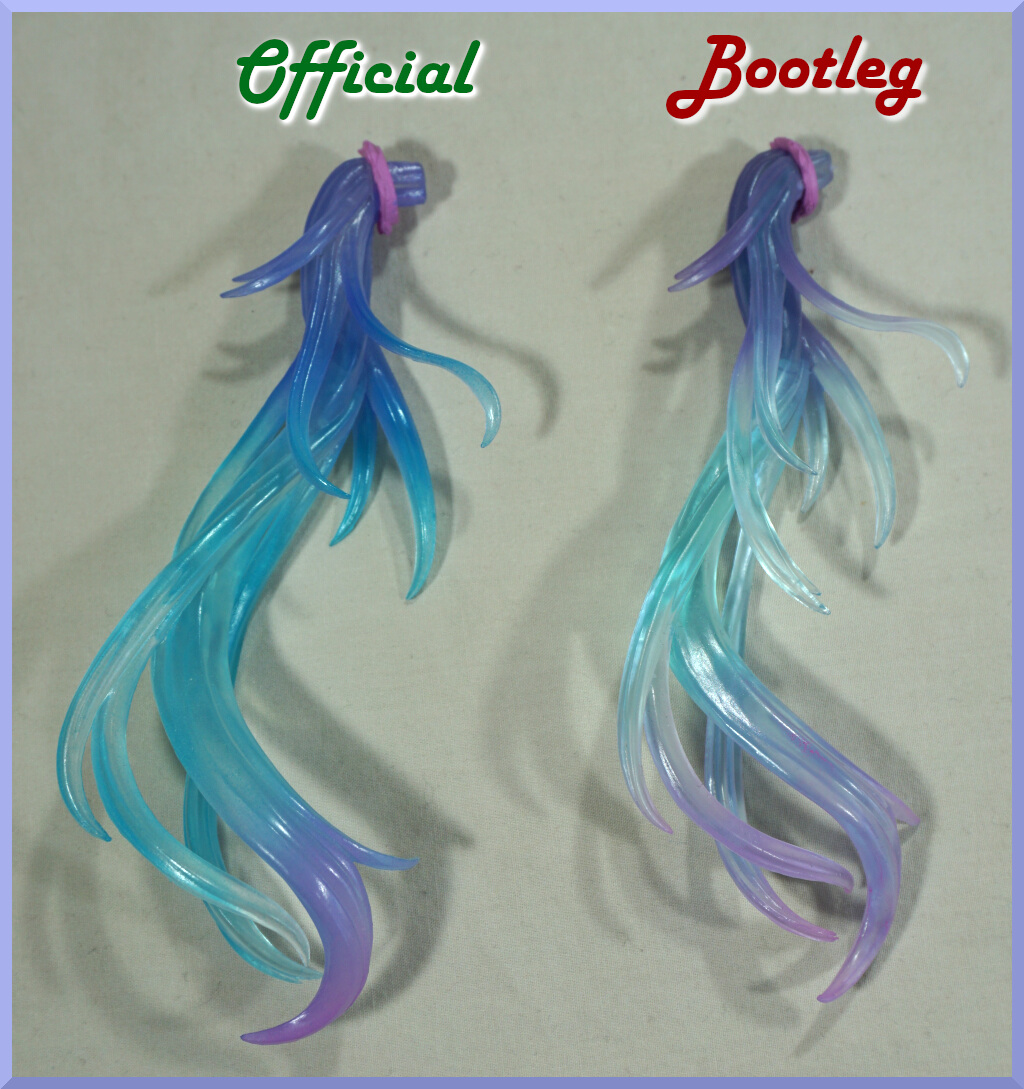 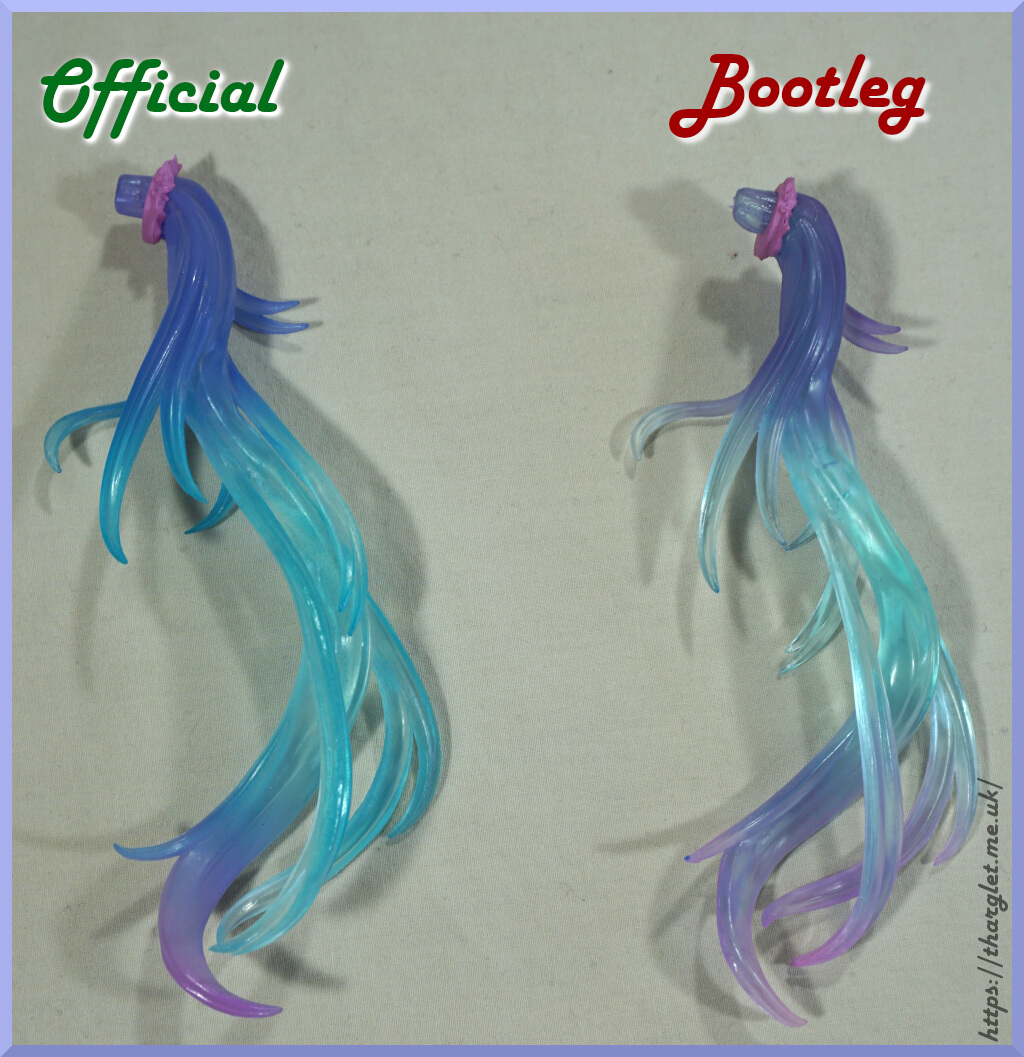 We have some variation in the curls on this side, but not as great as the left hand side. We also have similar colour variations as to the left side.

Let’s get those pigtails attached and see how she looks overall. 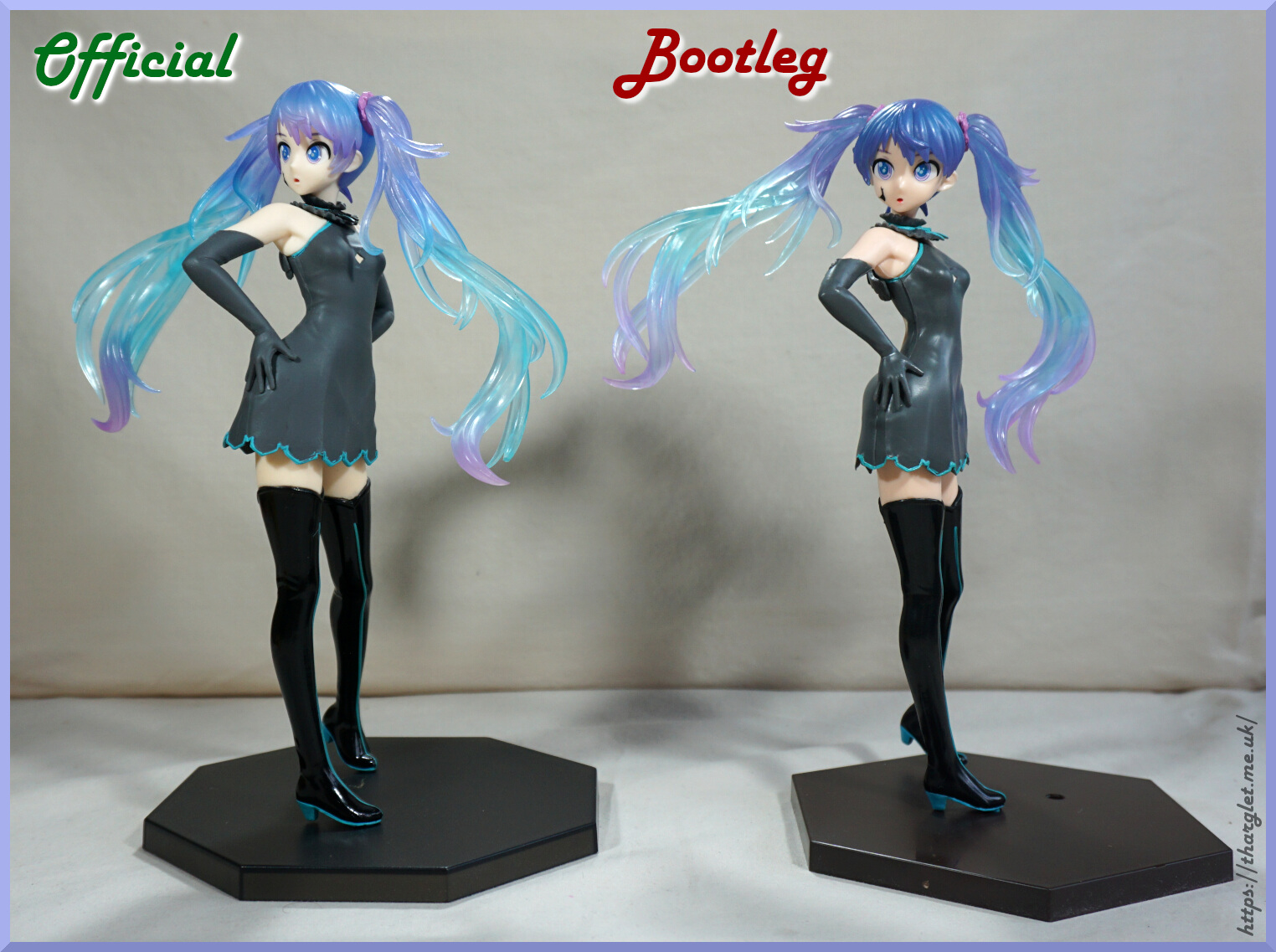 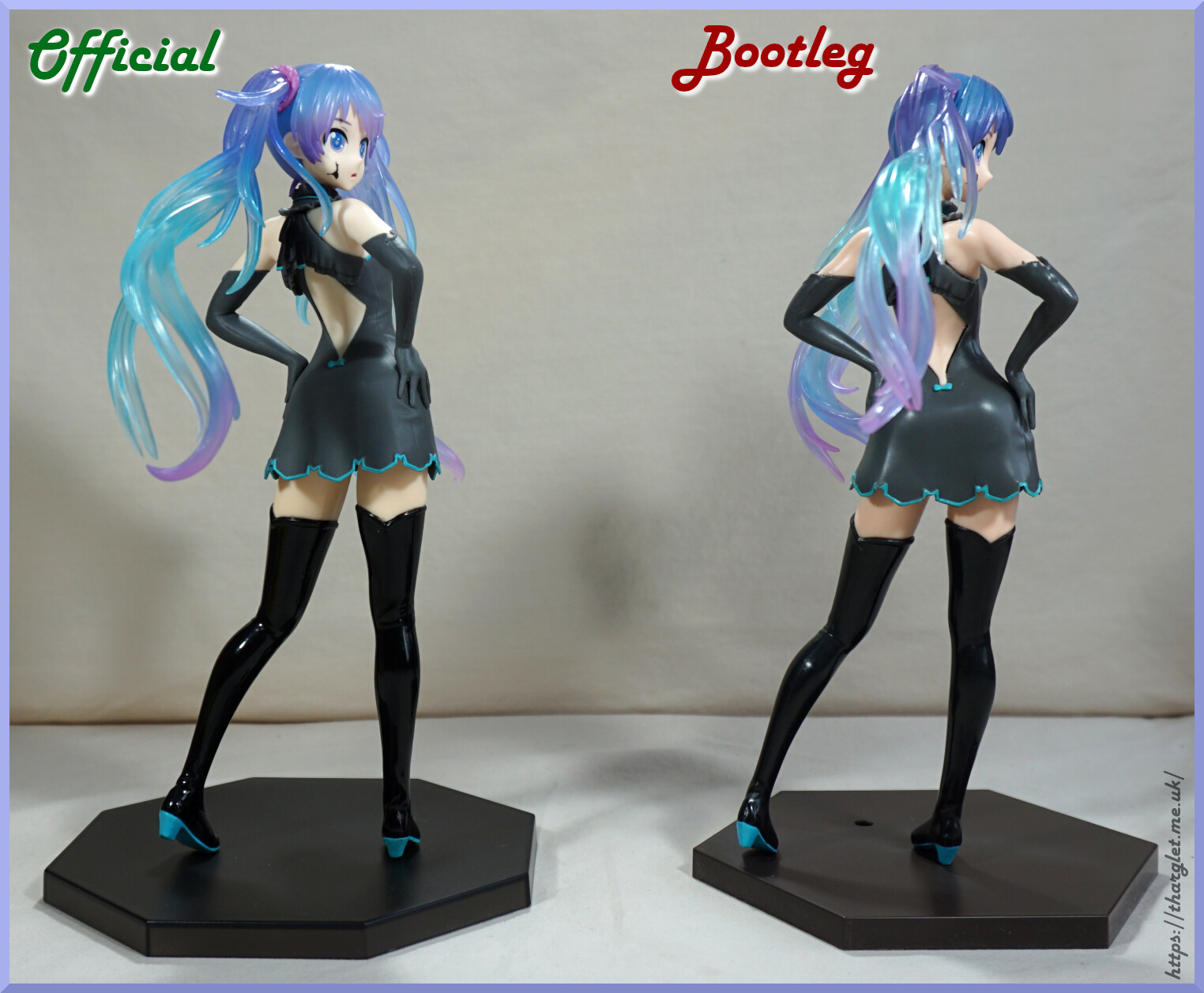 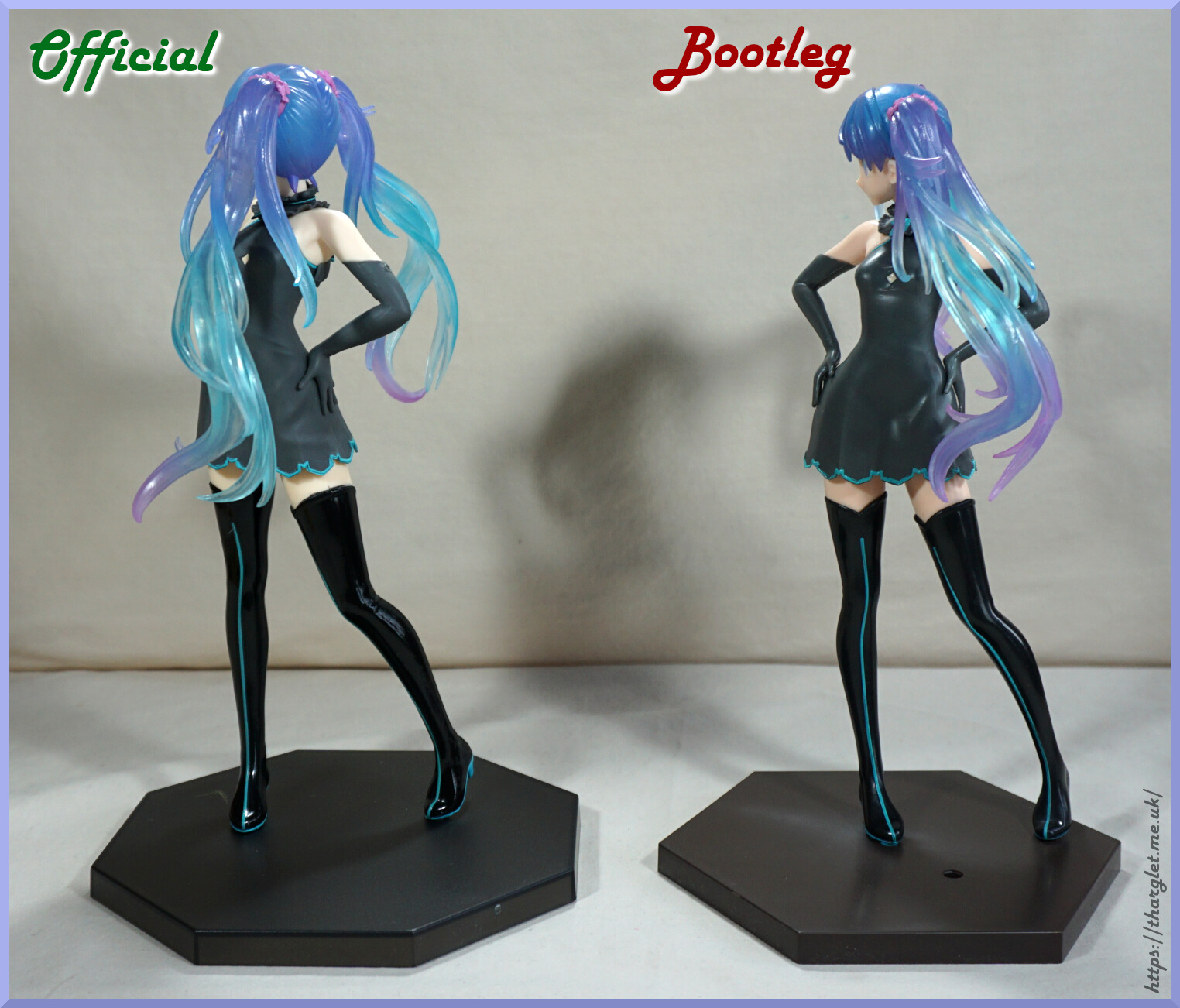 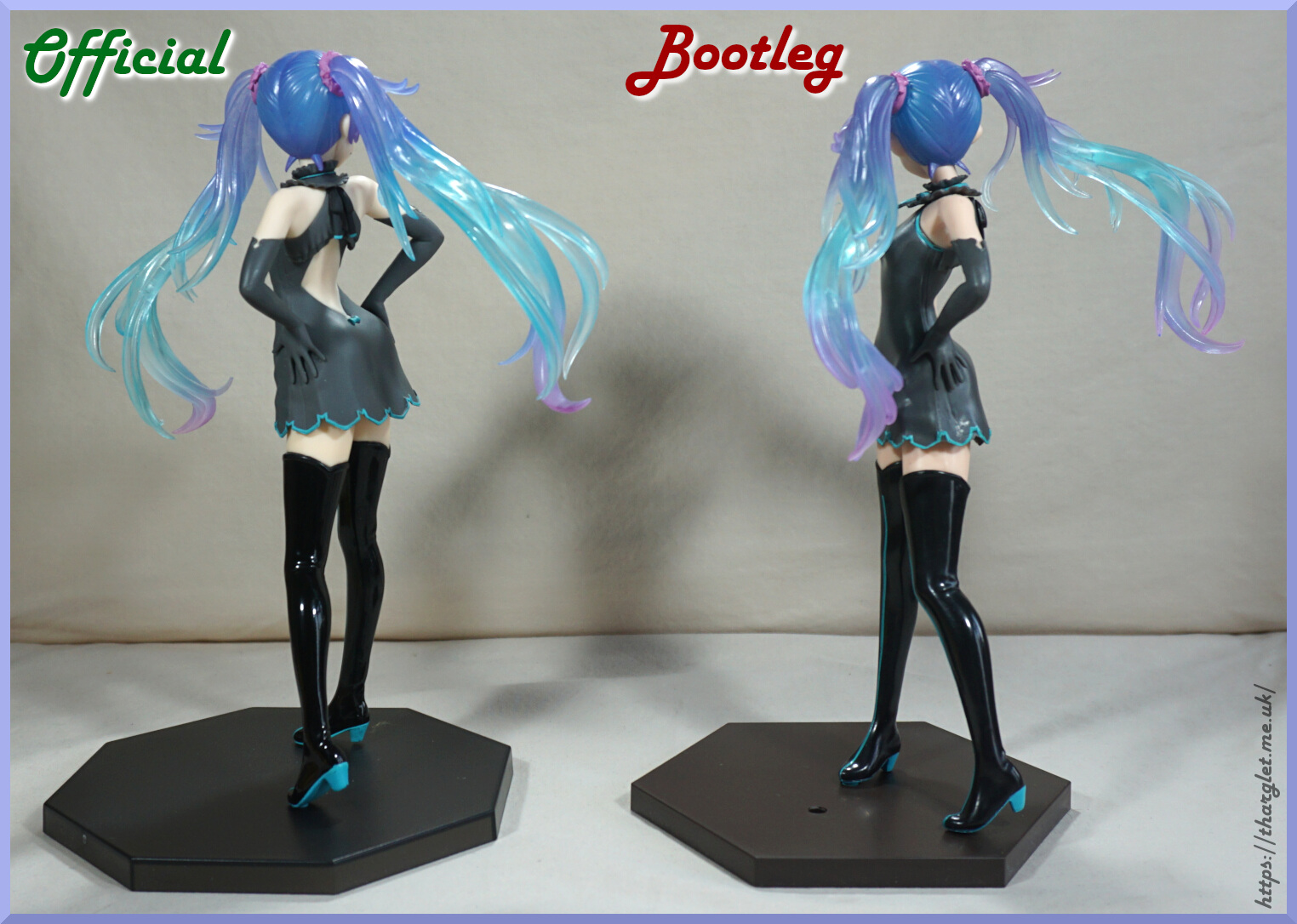 First thing I notice is the bootleg’s right pigtail going off into space! Vroom! Due to the differences in her neck and pigtail sculpt, it sticks out a lot more than it should.
Looking to the dress, the bootleg’s is noticeably darker and shinier.
With the bootleg, her foot can go in either hole – I ended up doing two photoshoots with her, and I think she looks better standing in the other hole, but these photos came out nicer. So I went with the dodgy base position.

When I had them on the stands, they appear to be difference sizes, but comparing them side-by-side, I don’t think there’s any notable difference in height: 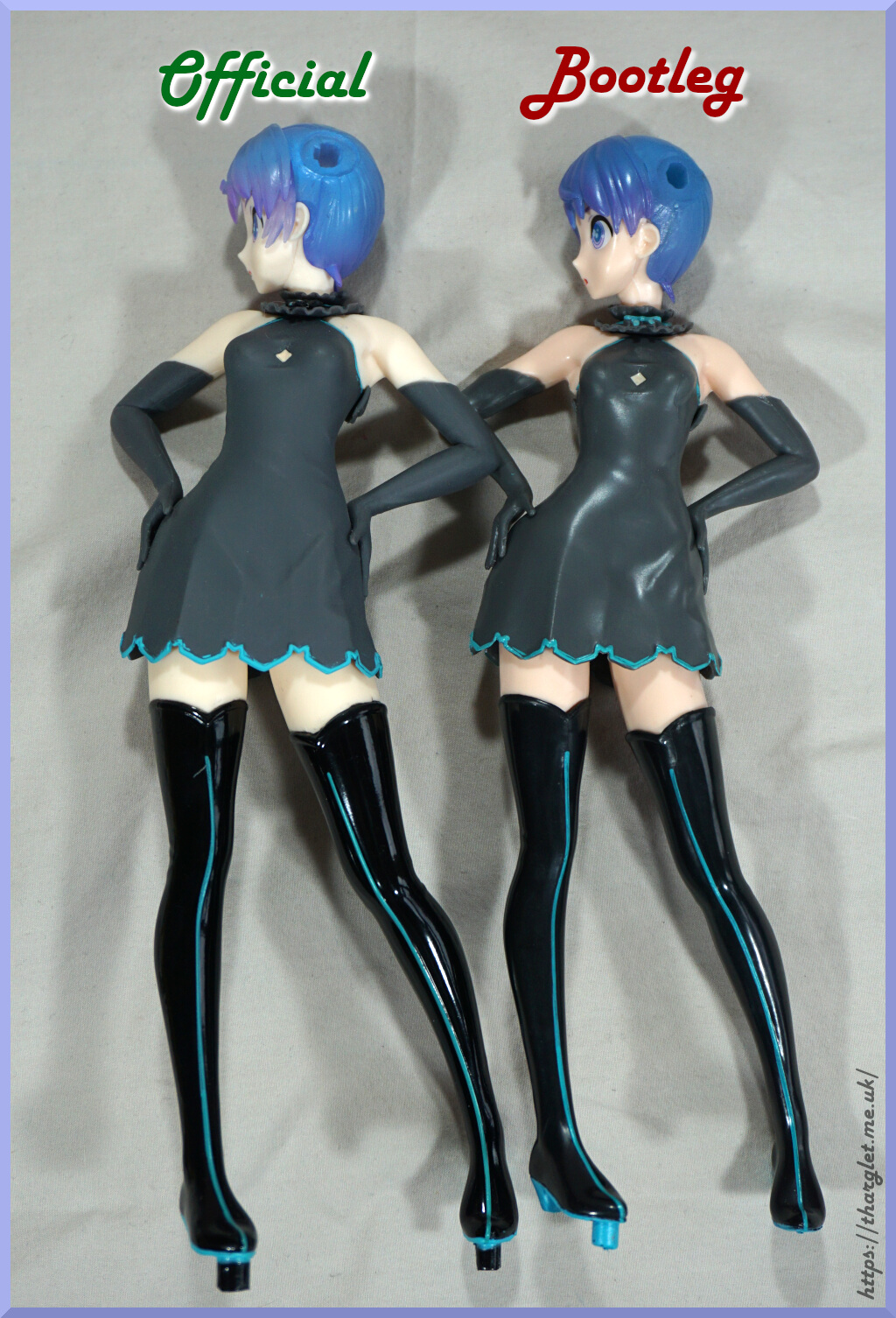 Let’s see how the details hold up when we look up close.
Face:

The bootleg’s hair on the head… oof. It’s very thick and pearlescent, not really matching the pigtails. Plus we have a bunch of mould defects in the middle. The bootleg also doesn’t have the purple tips of the official, though there are some purple accents in the paint. If we look to the left side of the bootleg’s hair, she seems to have had a haircut as we’re missing some hair strands.
Moving to her face, the bootleg isn’t Miku-pale – seems a running theme with Miku bootlegs.
The bootleg eye print isn’t as good a quality as the official either, missing out on some of the dotted shading and the grey parts have been done in white. The white layer hasn’t been done as thickly on the bootleg, so the eye details show through.
Looking to her mouth, the pink paint didn’t go right on the bootleg, almost looking like she’s gormlessly sticking her tongue out. Was rather amused by this when editing this image.

Mark on her face: 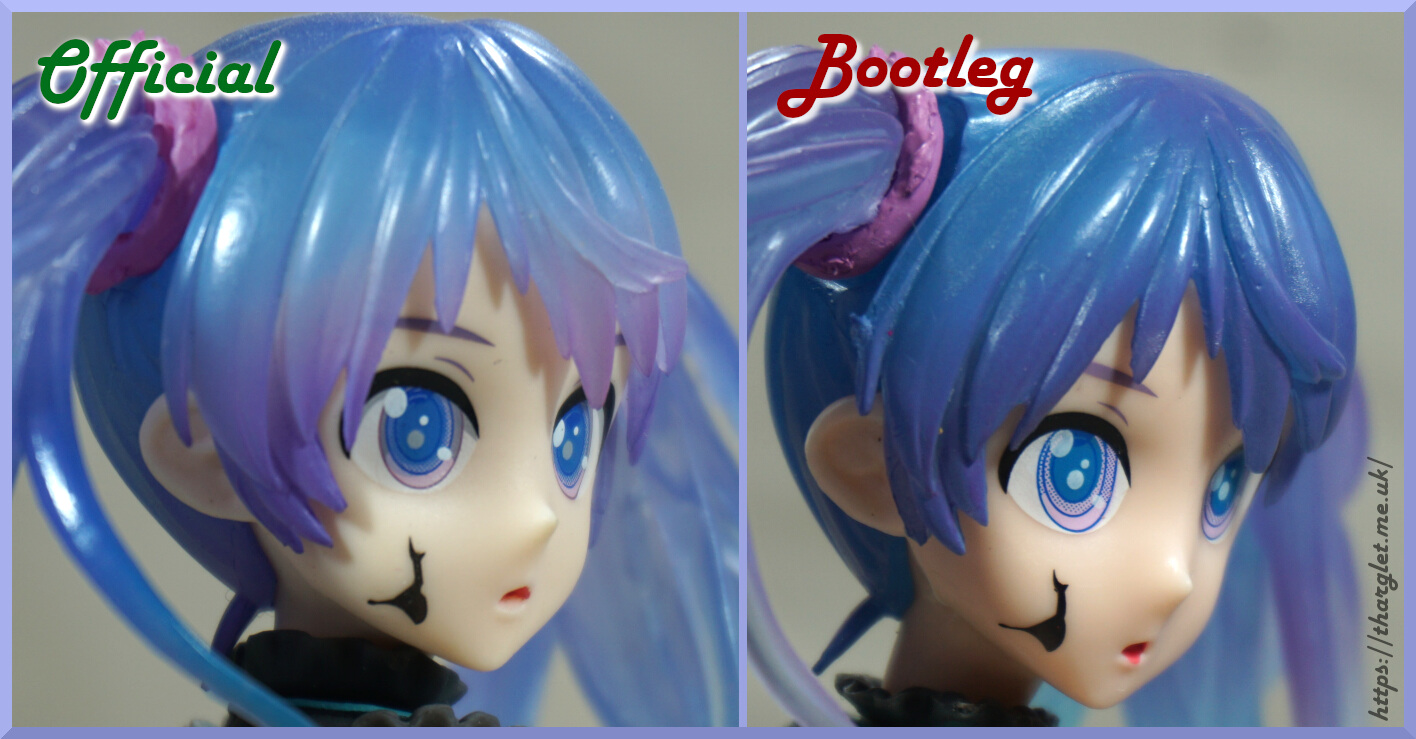 This bit has been replicated on the bootleg. Looks like it’s at a very slightly different angle and we’ve lost a little detail – nothing particularly noticeable.
Looking at her hair, the bootleg’s has some rough spots and globs of paint.

Back of her head: 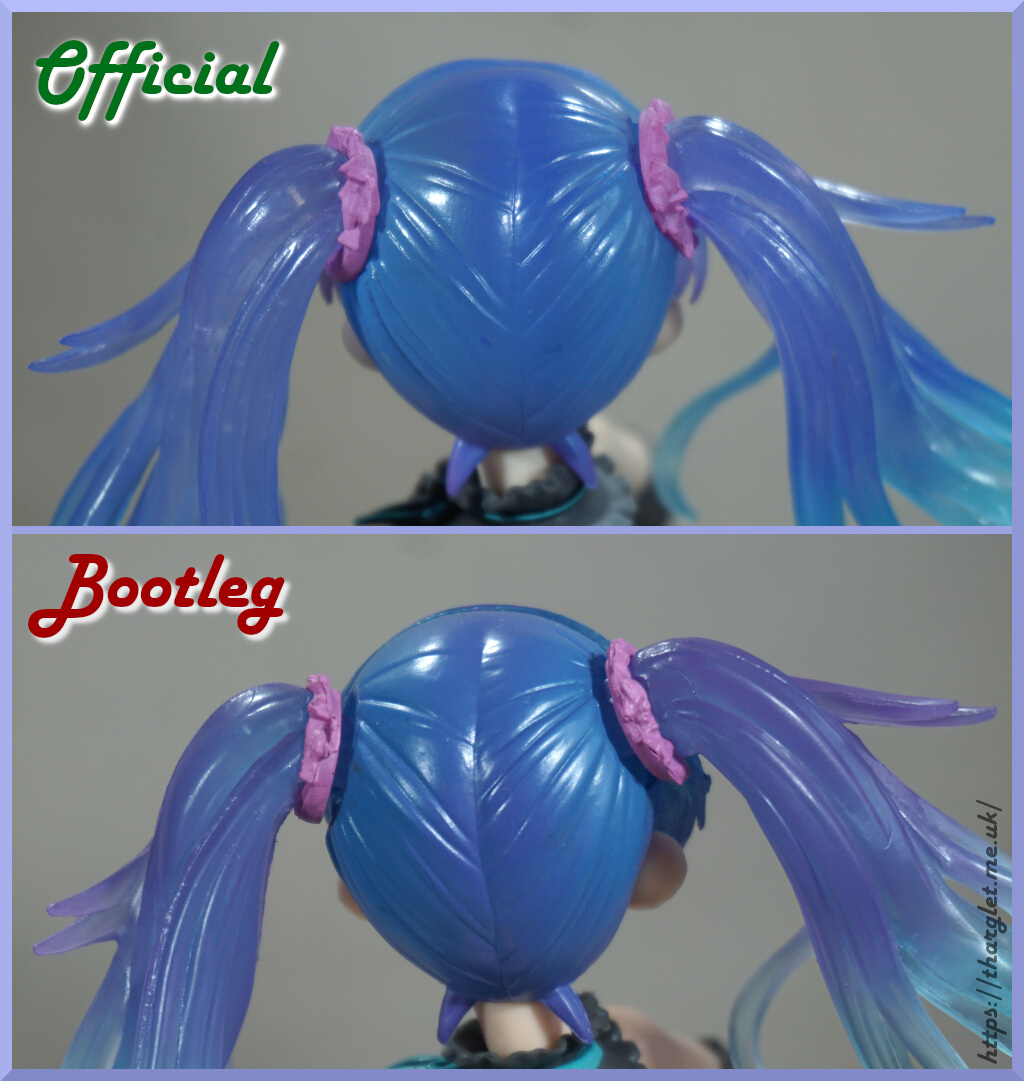 The bootleg has a bit of purple shading back here that the official doesn’t. The mould back here looks the same on both, however the bootleg pigtails aren’t fitting in the holes as well as the official’s.

Closeup of those pigtail joins:

The official’s go in pretty easily – one thing I like about it, didn’t have to do much fiddling to get them in, which is nice as not all prize figures fit together well. Bootleg though, yeah, they weren’t too happy.
Looking at the scrunchies, the bootleg’s has mould lines going around them and are a bit lumpier than their official counterpart.

The bootleg’s hair is more all over the place, as previously observed. However, looking at it on its own, it’s not that bad. The fringe doesn’t match the pigtails, so without them side-by-side, this might still look slightly odd. Both the bootleg and the official can exhibit air bubbles in the cast – if you look at the pale blue areas on both you may spot some bubbles. 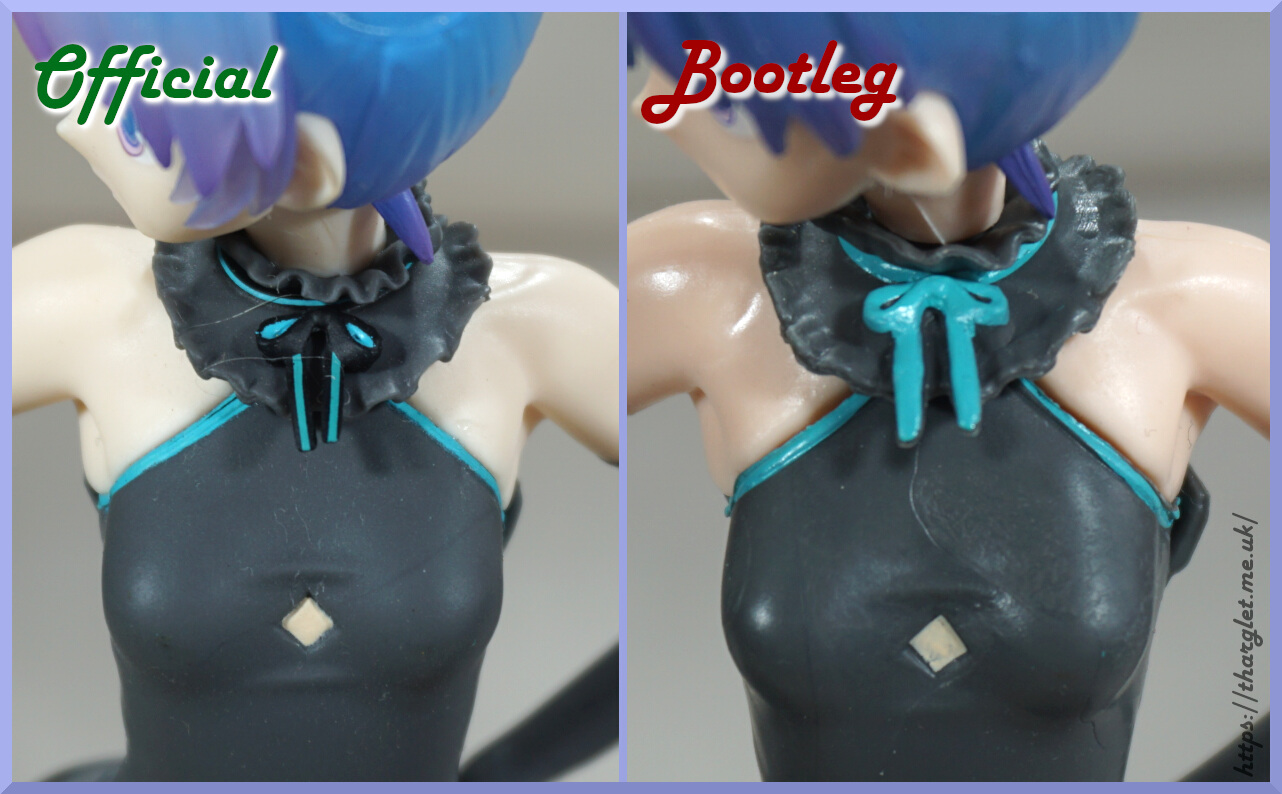 Now we get to see some of the serious downgrades on the bootleg. Starting with her collar, the green paint has been roughly applied on the bootleg, missing out on the finer details of the official. The casting on the bootleg’s collar is a bit rougher and it has a shinier appearance.
Moving to the skin, the bootleg definitely has a shininess problem. None of the skin parts on the bootleg fit correctly with the dress, leaving gaps around the edges of her dress. The diamond cutout in her dress hasn’t been painted thickly enough either, letting the dress colour show through.
Lastly, looking at the dress, the bootleg’s is too shiny and has a mould defect above the cutout. 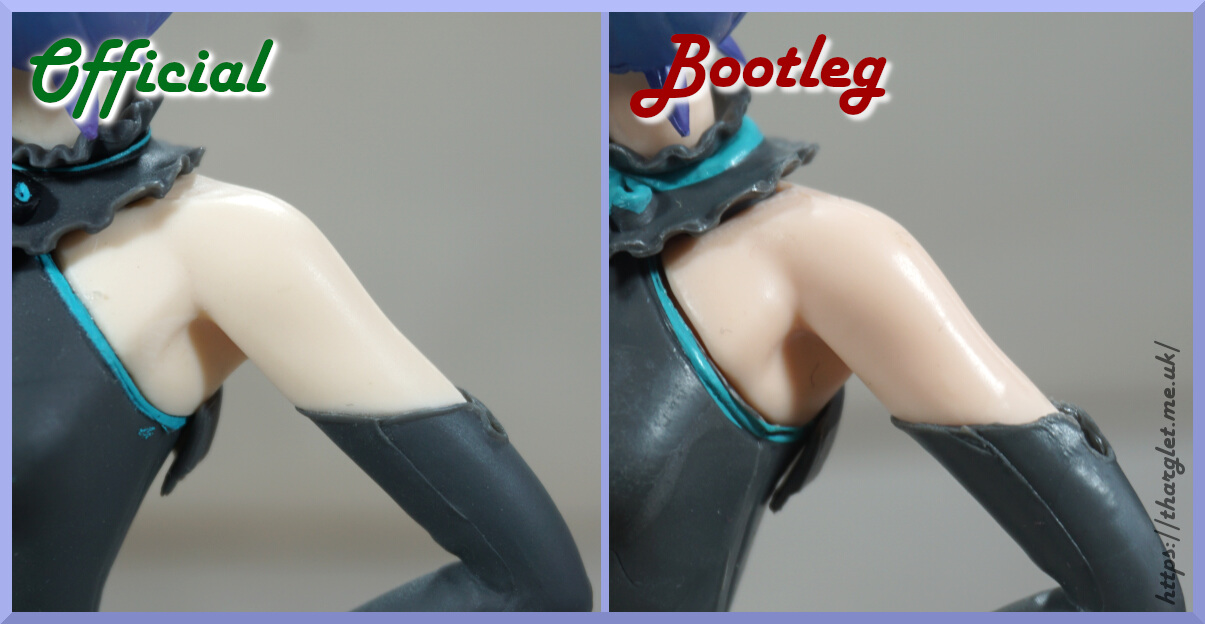 Oof, those bootleg parts really do NOT fit together well.
The top of the bootleg’s glove is really rough, missing the edging entirely. The glove seam isn’t great on the official, but the bootleg really manages to make a hash of it. 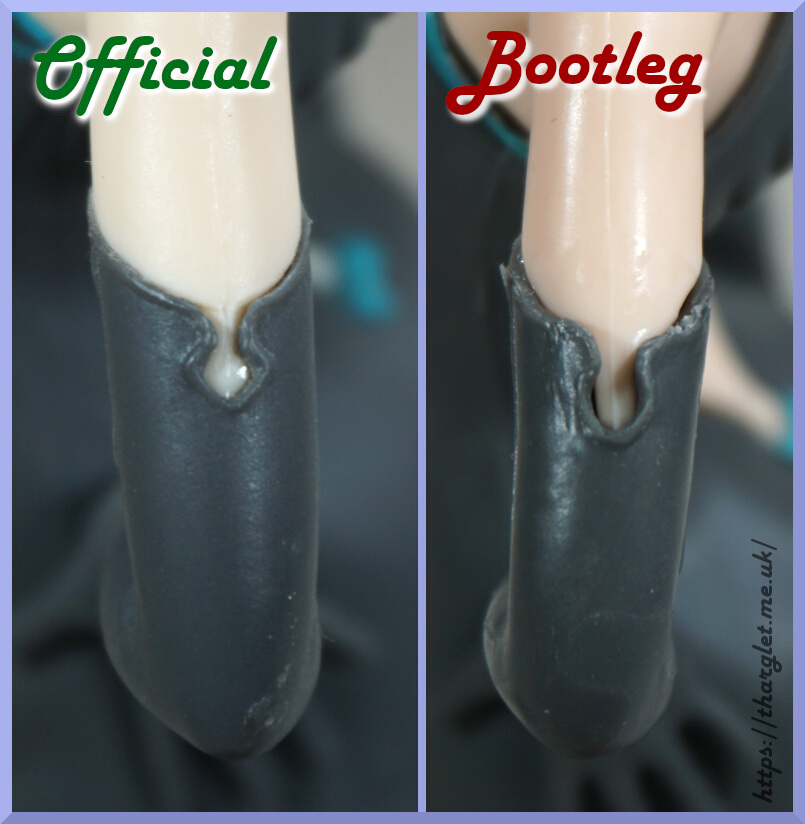 Now that moulding is just painfully bad on the bootleg. The diamond area has totally lost shape, revealing the shape of the body’s plastic underneath.
The official is fine for a prize figure – we have a tiny bit of gap but nothing hideous. Thankfully.

Back of the bow: 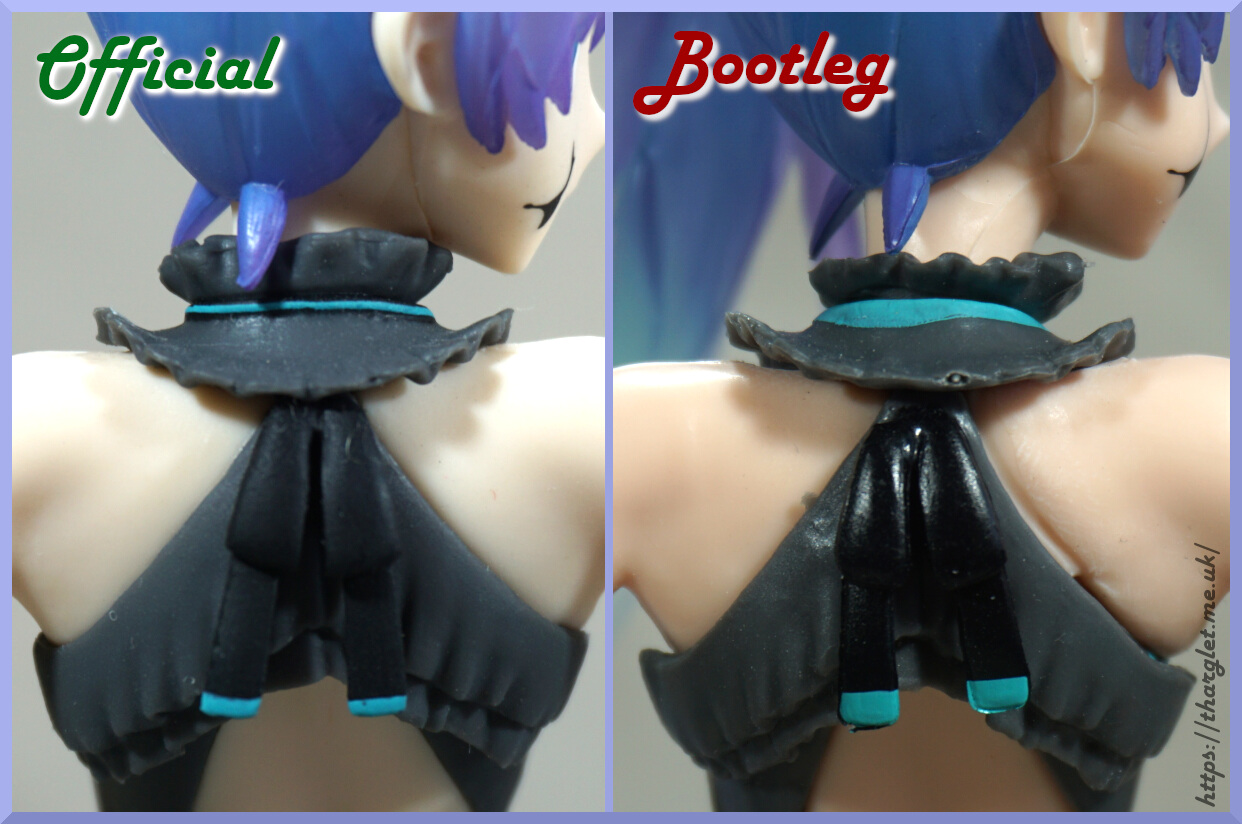 Looking at the collar, the bootleg’s green trim is painted too thickly here too. The collar has also lost its shape and doesn’t stand up as much as it should, giving her a bit of an elongated neck.
Moving to the ties, the bootleg’s are shiny instead of matte, we have too much green (again), there’s excess plastic on the edges and the collar doesn’t hide where it attaches, looking like someone lost a game of “pin the tail on the Miku”.
Again, the body doesn’t attach properly on the bootleg back here, revealing one of the pegs that attaches the parts together.

Back of the dress: 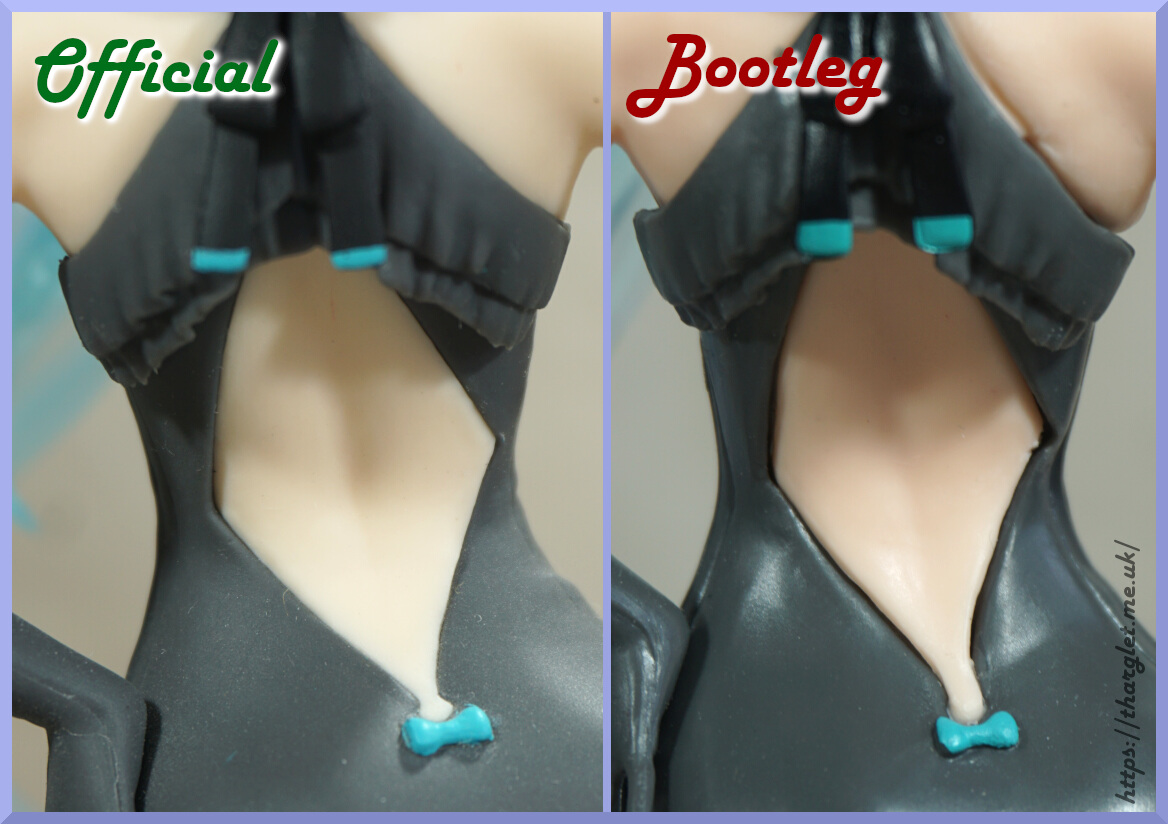 OK, let’s start with the good: the green bow is painted nicely on both.
Oh dear… this bootleg… she seems to have pink icing instead of a back. This bit fits horribly.

Close-up of the back action: 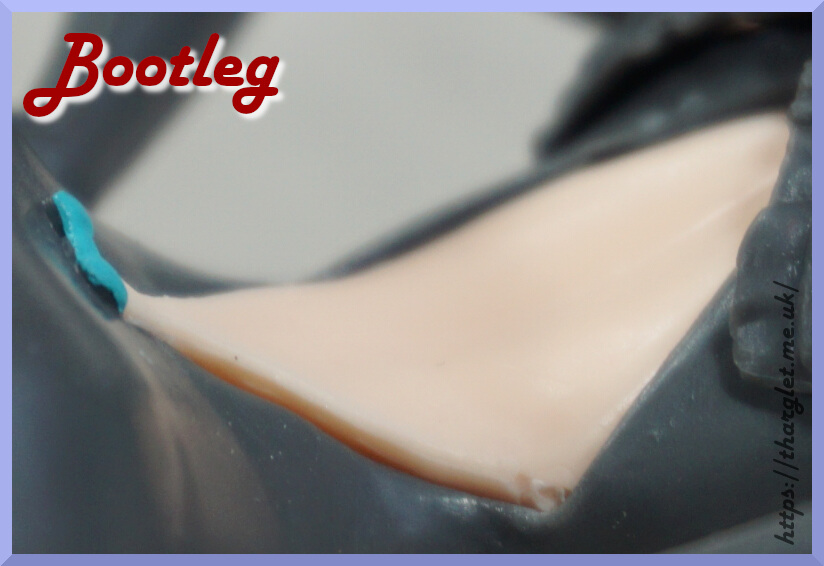 Just. No. This bit just doesn’t fit at all. Nothing to salvage here.

Let’s distract ourselves with a good joke: 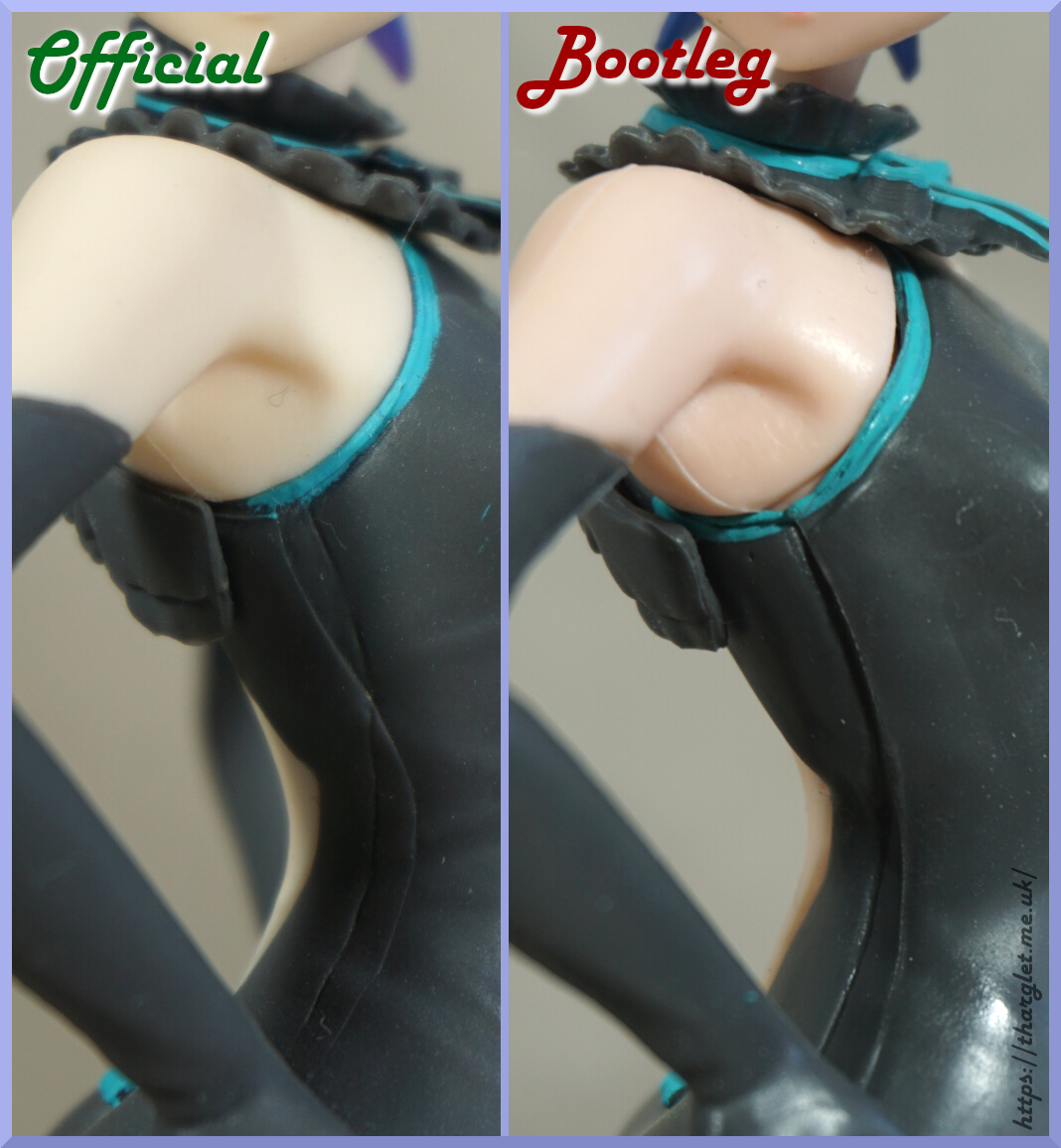 Bootleg must’ve enjoyed the joke – her sides seem to be splitting!
Green paint is kind of dodgy on both here. Not sure what happened with the seam design on the official here, does look odd with the plastic seam running over the sculpted one.
The bootleg is a total fail here though – just has a large gap between the dress parts with a darker grey bit in between. If this was done nicely, it could’ve looked better than the official with two parallel seams, but no. 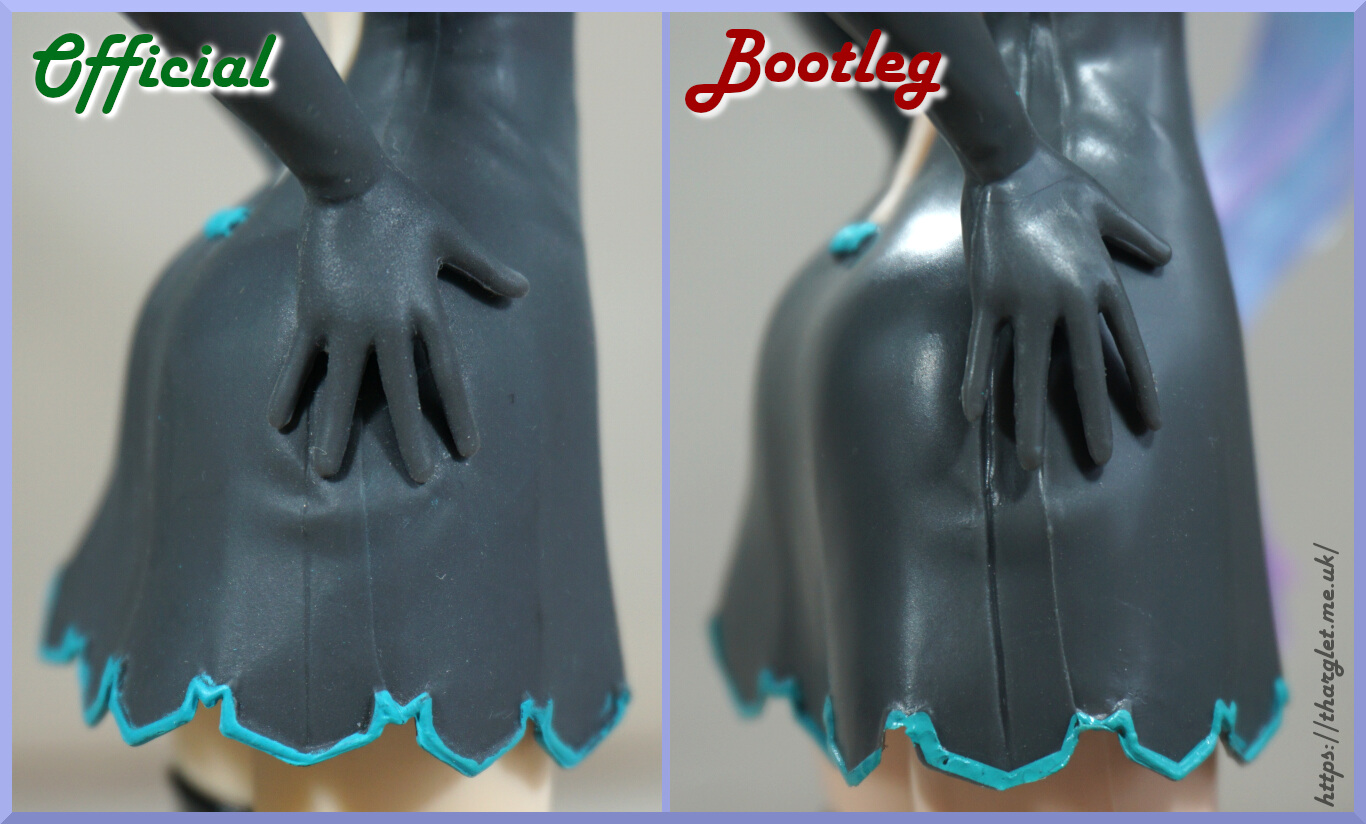 The casting on the hand seems to have gone fine, but the fingers aren’t as spread as they are on the official’s. The difference in finish of the dresses is quite apparent here – with the photography lights clearly shining off of the bootleg.
Those dress seams aren’t looking very good on the bootleg down here either.
The trim is a bit of a mess on both. The bootleg’s trim paint is a bit of a thicker line than the official’s.
The dress’s overall shape is a little different at the bottom, with the back of the dress folded inwards a bit more on the bootleg. 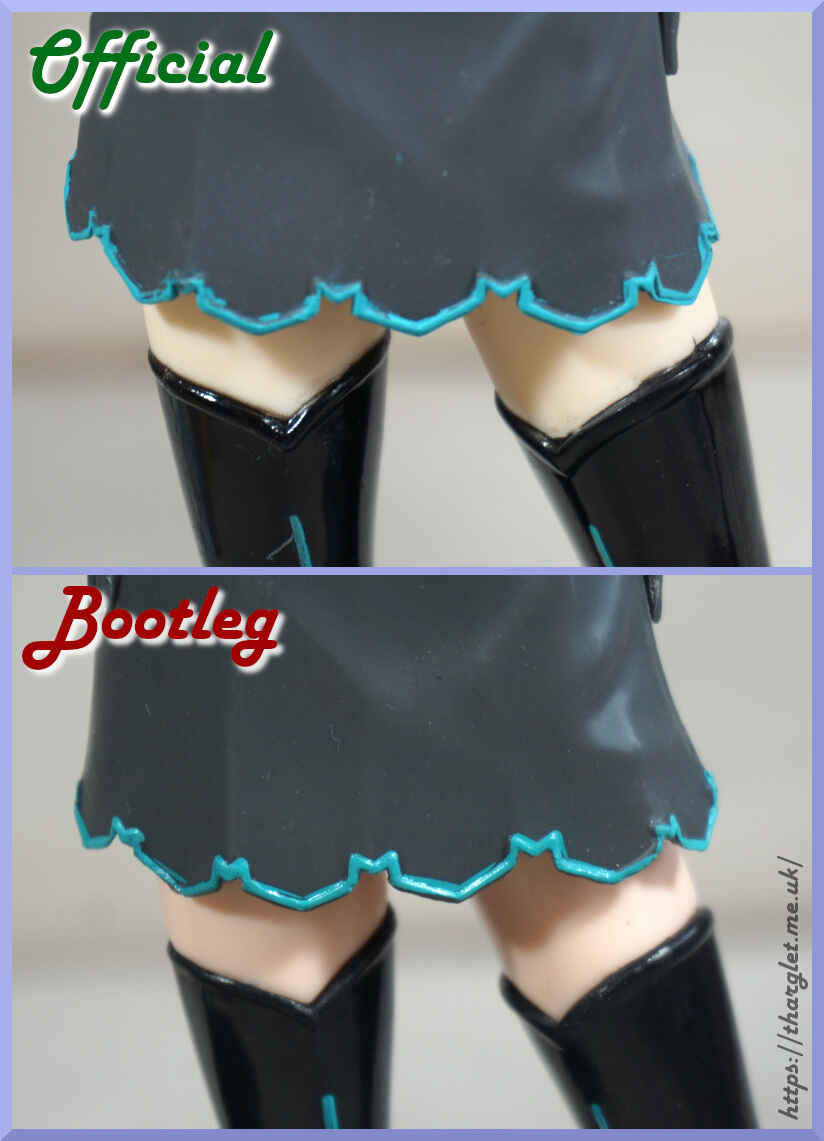 For me personally, this is the worst part of the official – the green paint wasn’t very neatly applied, leaving both the official and bootleg trims looking messy.

Back of the boot tops: 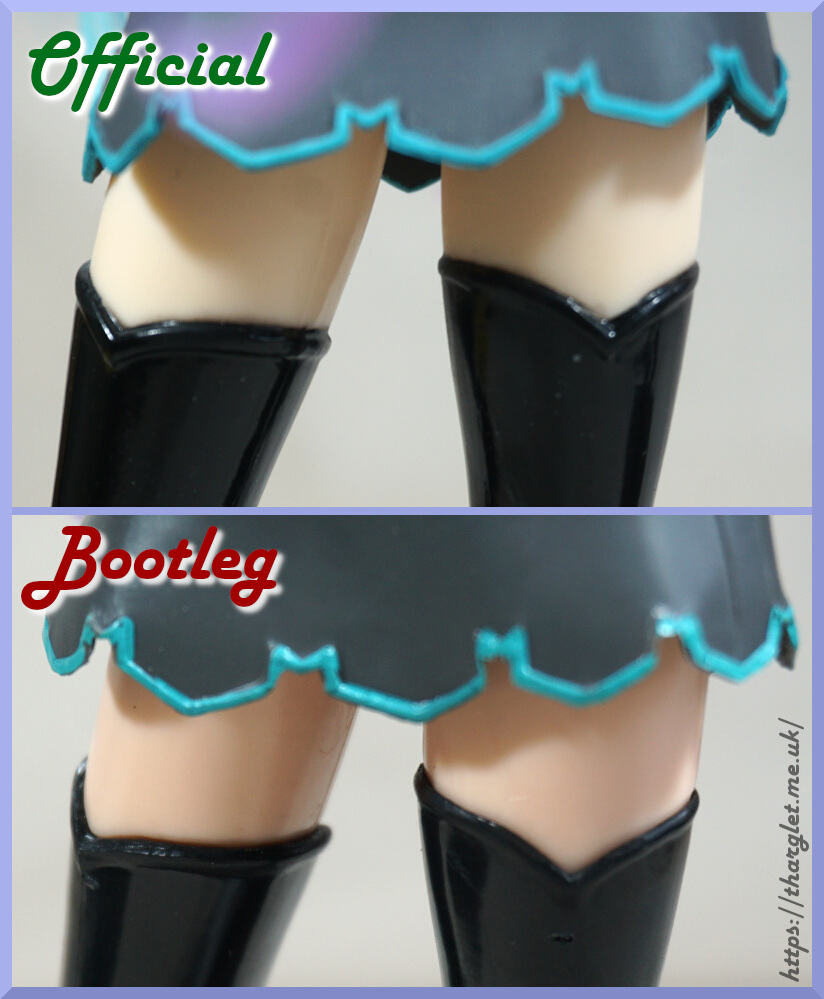 The boot tops are less defined on the bootleg, and her right boot has a dent.
Skin colours are also notably different on the legs. 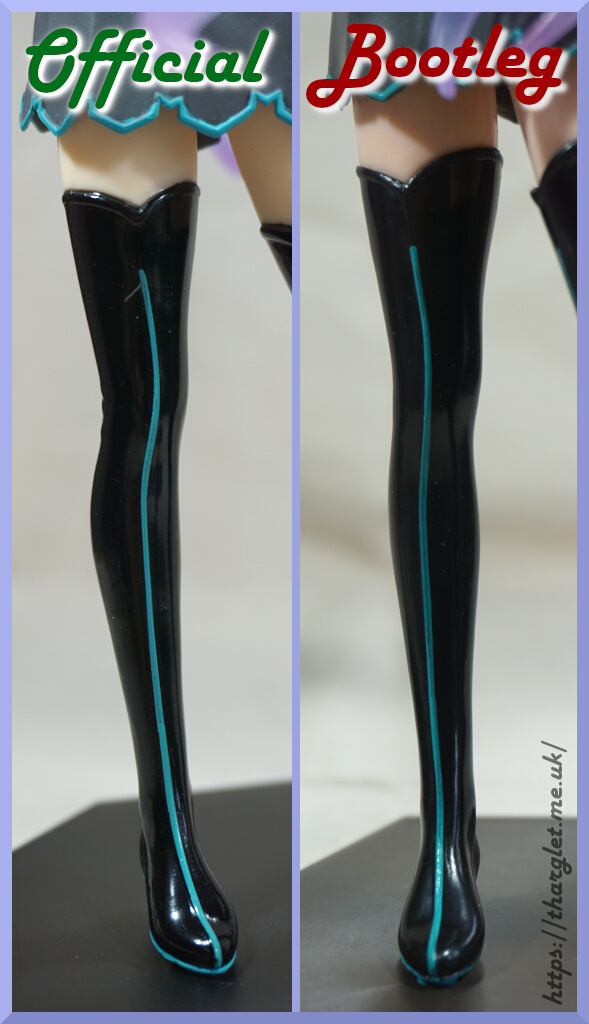 The vertical line manages to be decent on both, but the bootleg’s sole is a bit lacking in the paint department.
Again, the top of the boot is better defined on the official. 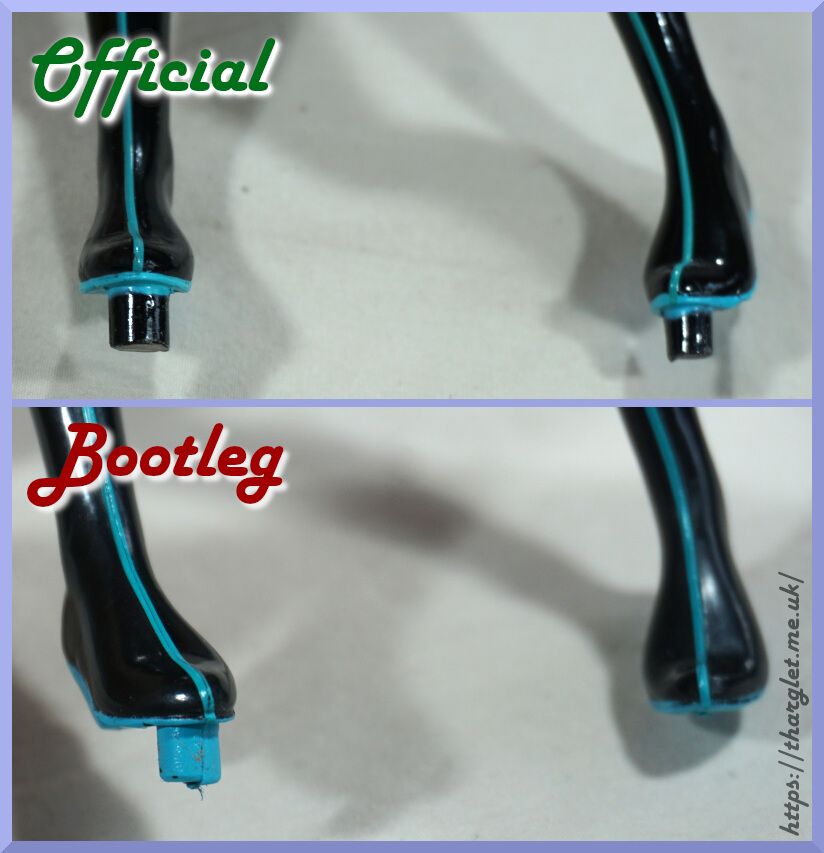 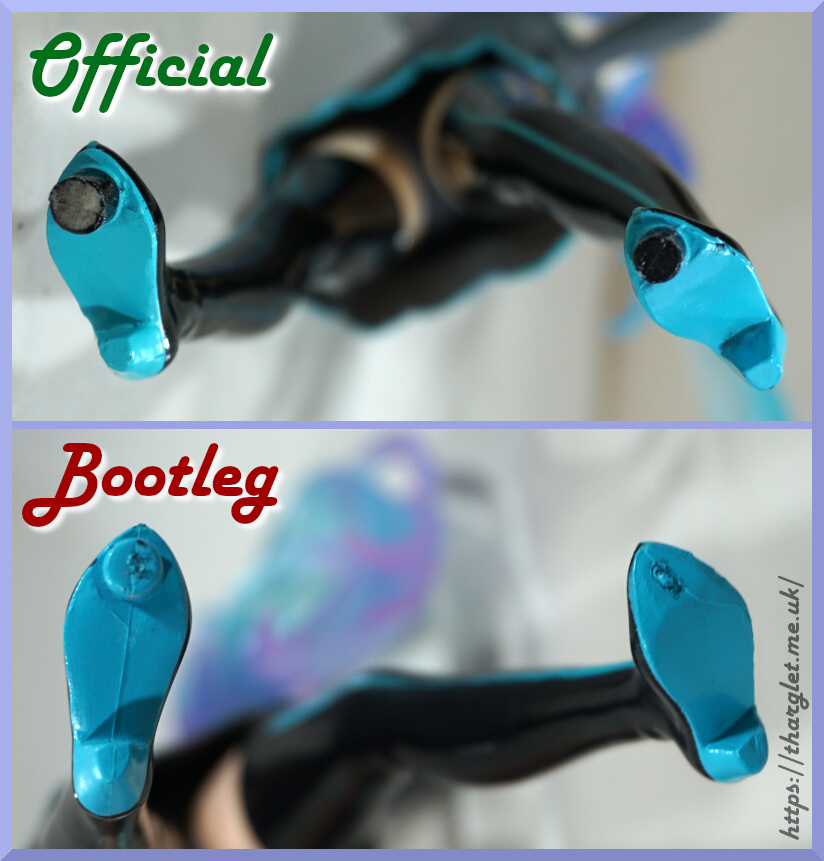 Big difference: The bootleg has only one peg, whilst the official has two. So there is potential for the bootleg to develop leaning issues thanks to a lack of support. This is also why you can peg the bootleg in both holes – as one foot lacks a peg. And no, the bootleg didn’t come with a stand piece or anything for the second hole.
The bootleg’s one peg is green, whilst the official’s have been painted the same black as the rest of her boots.

Yeah, the bootleg isn’t worth your money. Due to the poor fit of the parts, she can look pretty defective from certain angles. I know quite a few people aren’t a fan of the charcoal dress – I rather like the contrast it gives and I think an all-shiny-black might look overly ‘heavy’. Though I think it can probably be agreed the extra shiny on the grey dress doesn’t enhance the figure.
As for telling them apart, the bases is the easiest at a glance. Looking up close, the hair on the head is notably different, and there’s the shininess on the dress and skin. Plus the parts just not fitting right at all, making the bootleg look a mess.
With assembly, the bootleg’s poorly cast pigtail pegs don’t fit into the holes well, and the bootleg leaves an ugly hole on its base – not sure what they were thinking here! With the two pegs, the official is nice and sturdy, and the bootleg noticeably less so with its one peg.

And if you’re curious as to how she looks without her pigtails: 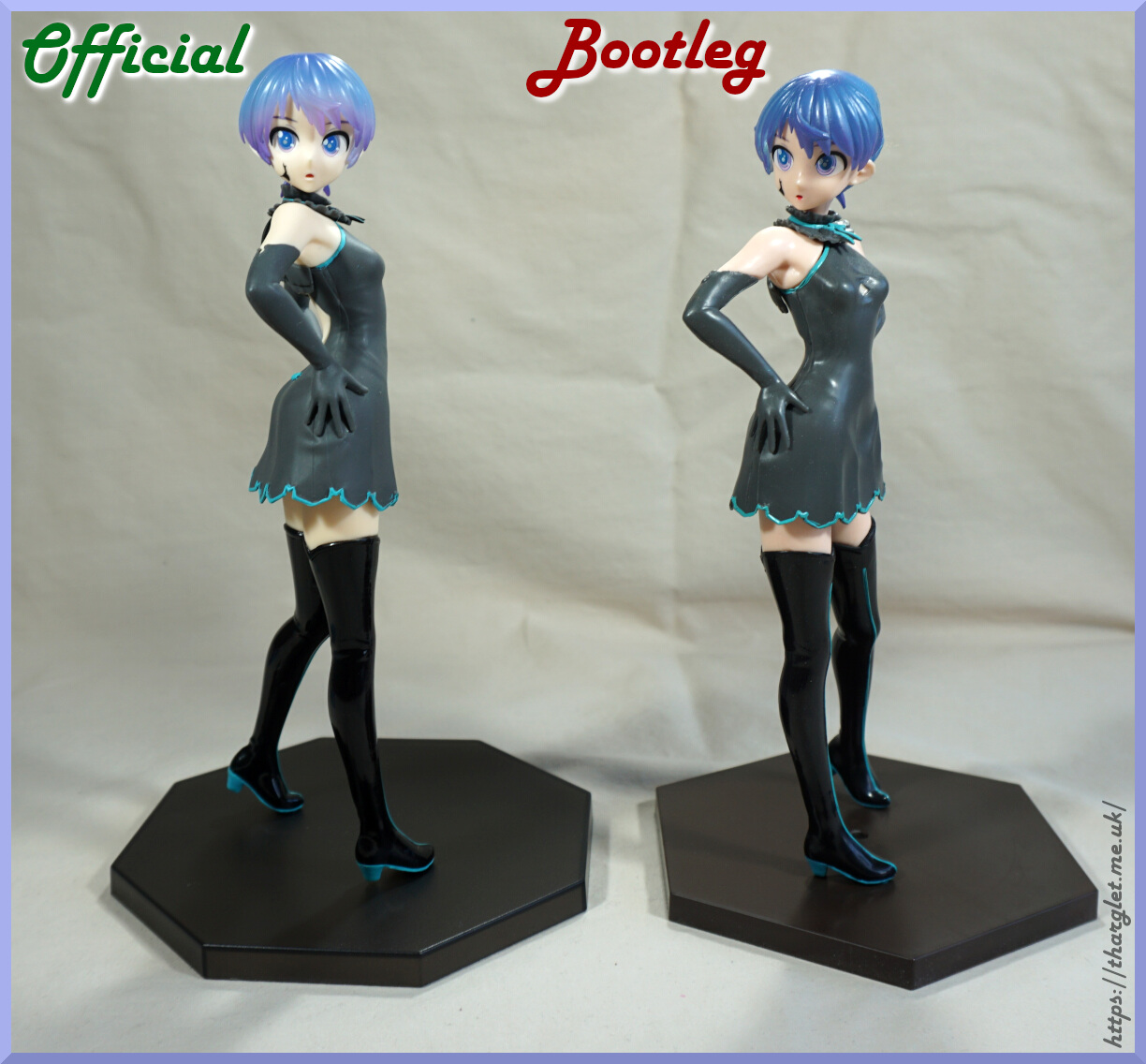 This can work from the front angle, if you want a shorthair Miku, though it has a specific set of view angles it works with, thanks to the peg holes.
This shot was also done with the bootleg in the outer hole – I think this was the intended hole to use on the bootleg as she sits more centrally to the base.