Time for something slightly different… a “bonus” blog, comparing two Medusa (aka Rider) prize figures. For a Fate character, Medusa’s been a bit shafted in the figure department – most of her figures are from 2010 or earlier. Then after an 8-year drought, a figure was released! Aaaand it was a mediocre bunny by Funnyknights. Then a few figures of her Fate/Grand Order appearance, which I’m personally not fond of.
Then we get… two prize figures! I’ll take what I can get! There were some debates of which people favoured, but me being me, I went for both.

This blog is intended as a one-off – mostly to compare these two figures and an excuse to use some new photography lights I’ve recently purchased.

The Banpresto figure was opened, so I got it cheaper than the current market value (~¥1,500). Sega’s can now be had for around ¥1,200 plus shipping – I was rather overeager to get it, so ended up paying a bit more to not risk missing out. Wasn’t sure how popular she was going to be, seeing as it had been a long time since a F/SN Medusa figure had been released.

This is the main images we had to go on, prior to the actual release: 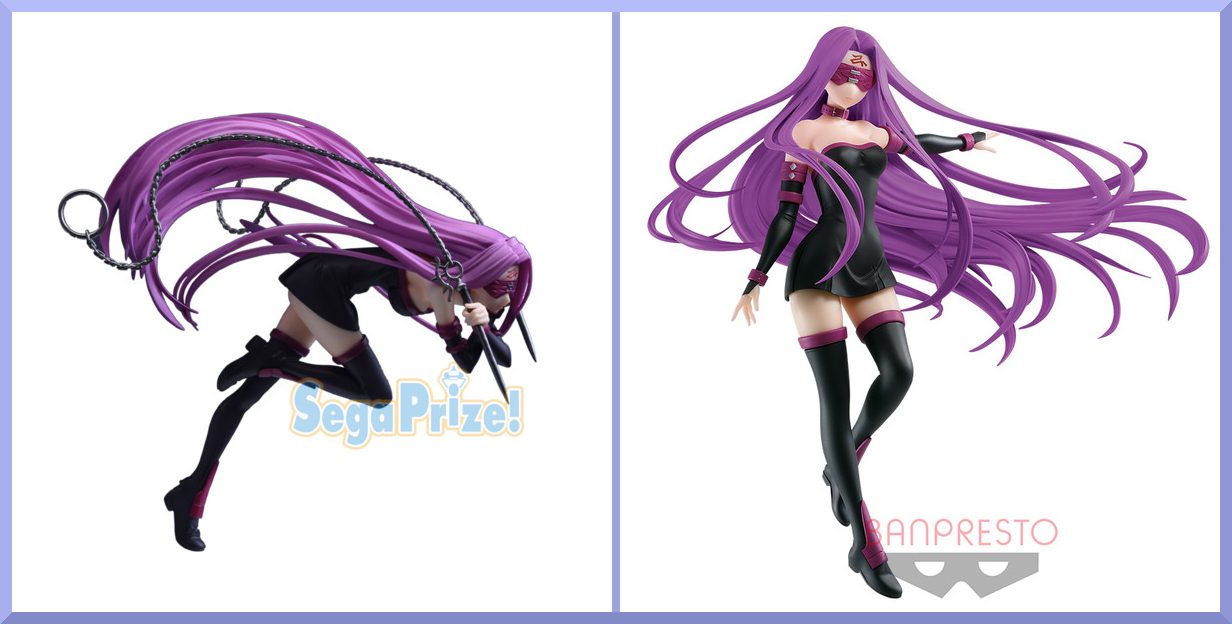 Much was left up to the imagination, how would the flowing hair work? What kind of stands would they have? What would the final paint finish be like?

Here are the bases disassembled:

The Sega one has three parts to support the diving pose, whilst the Banpresto’s is just two with a support for her hair. 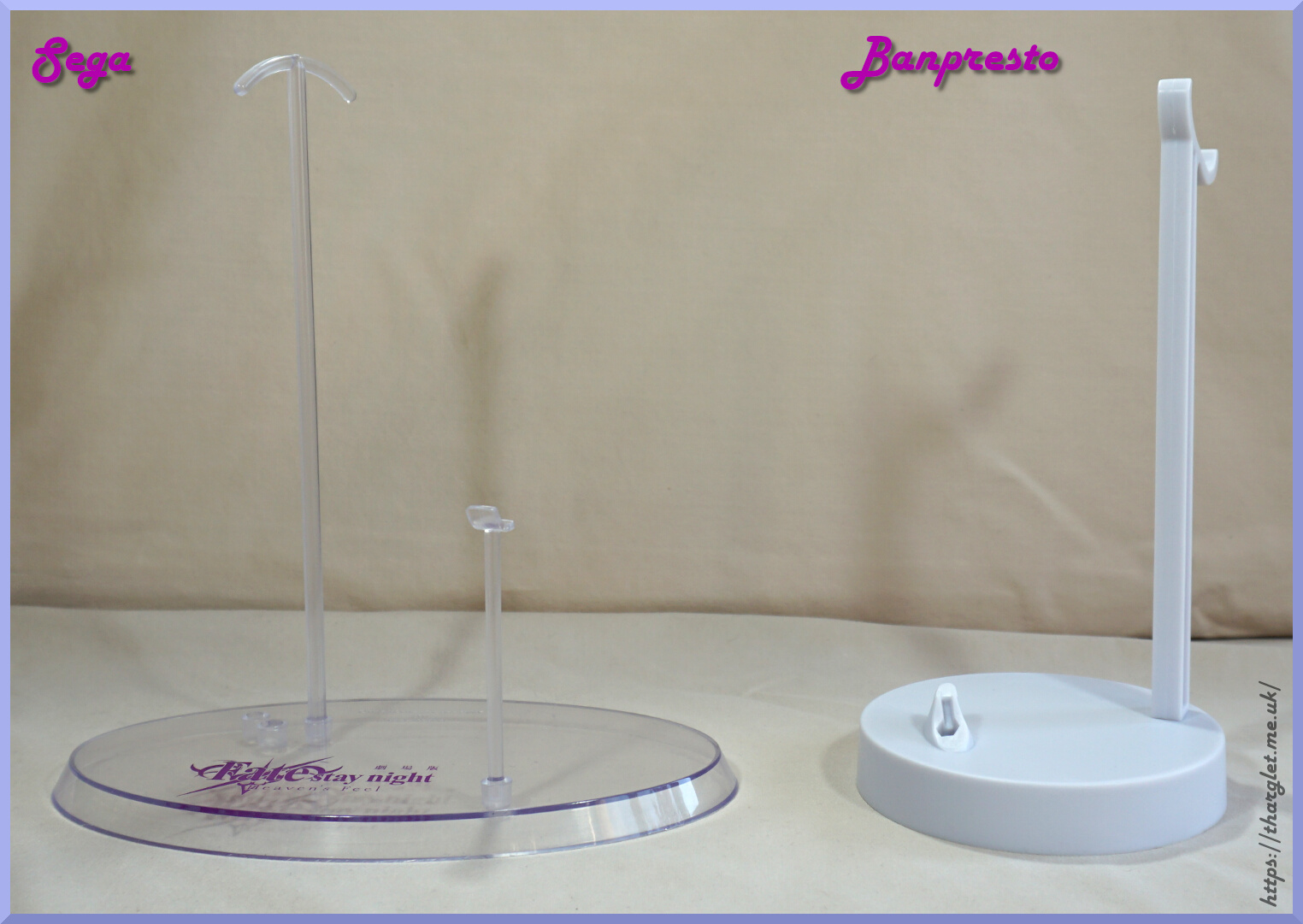 Both are very sticky-uppy. I prefer Sega’s base, as it is clear and has a nice logo on it. Banpresto can have a consolation point for being less of a space hog, though.

The Sega figure comes in several parts, unlike the Banpresto one: 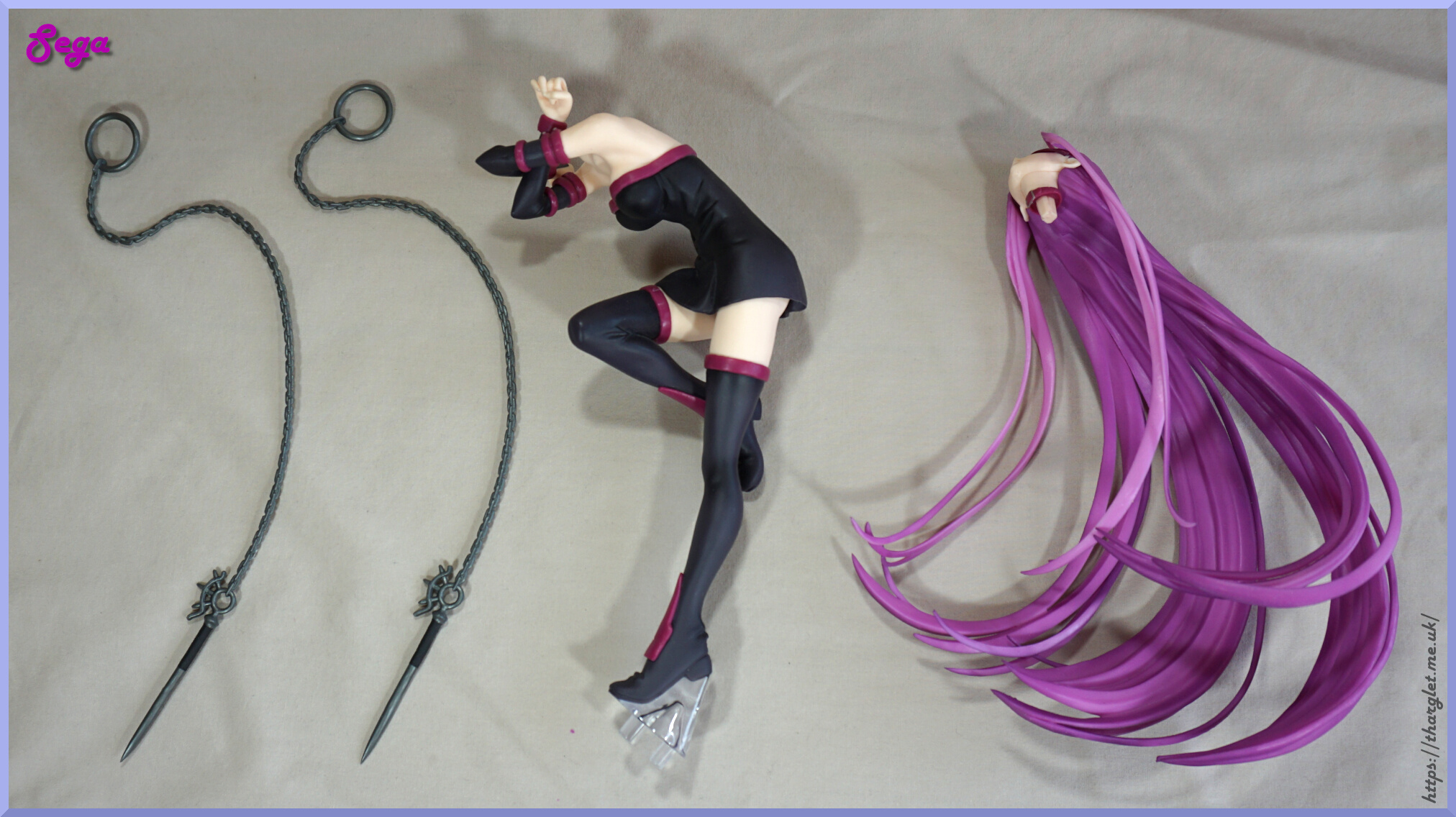 As she is reasonably sizeable once assembled, this does help her fit into a smaller box than she otherwise would.

The Sega one also has hands posed to slot her weapons into: 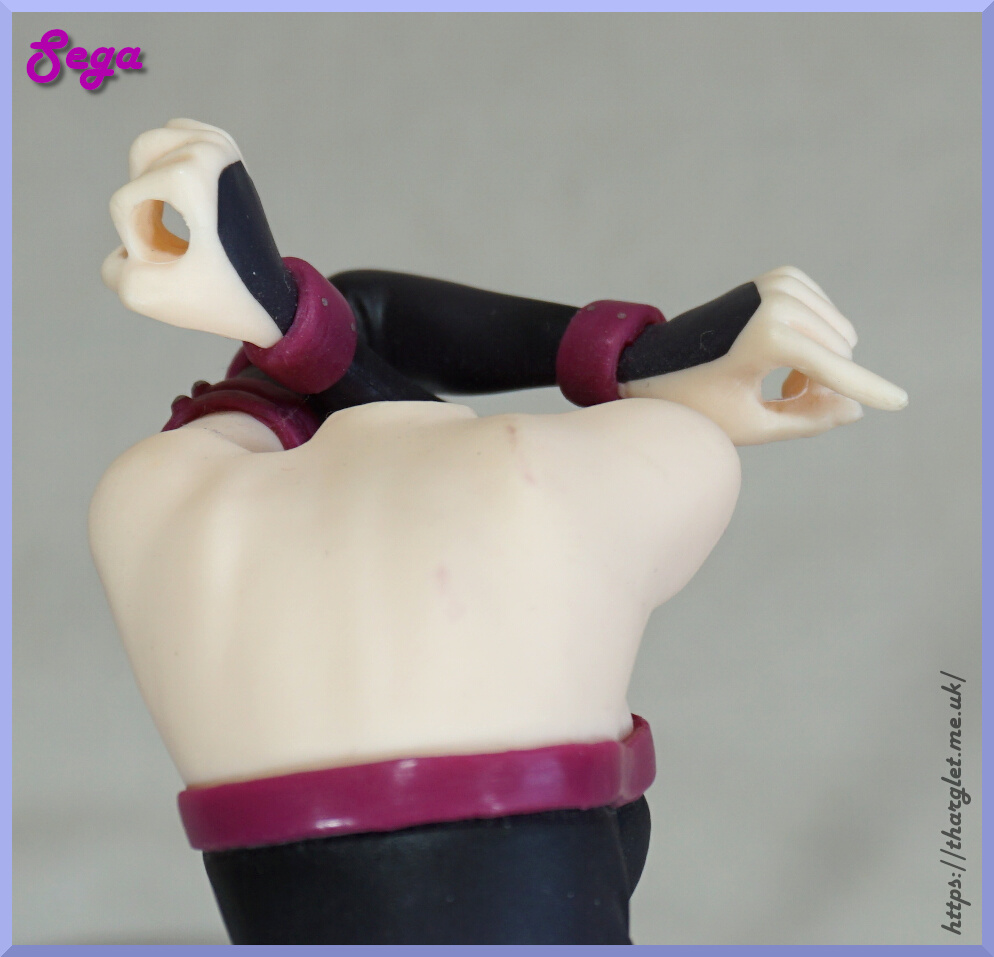 Her weapons fit fairly snugly into these holes, and don’t feel in danger of dropping out. The head on mine though can be a tiny bit pesky about falling out when moving her around though. 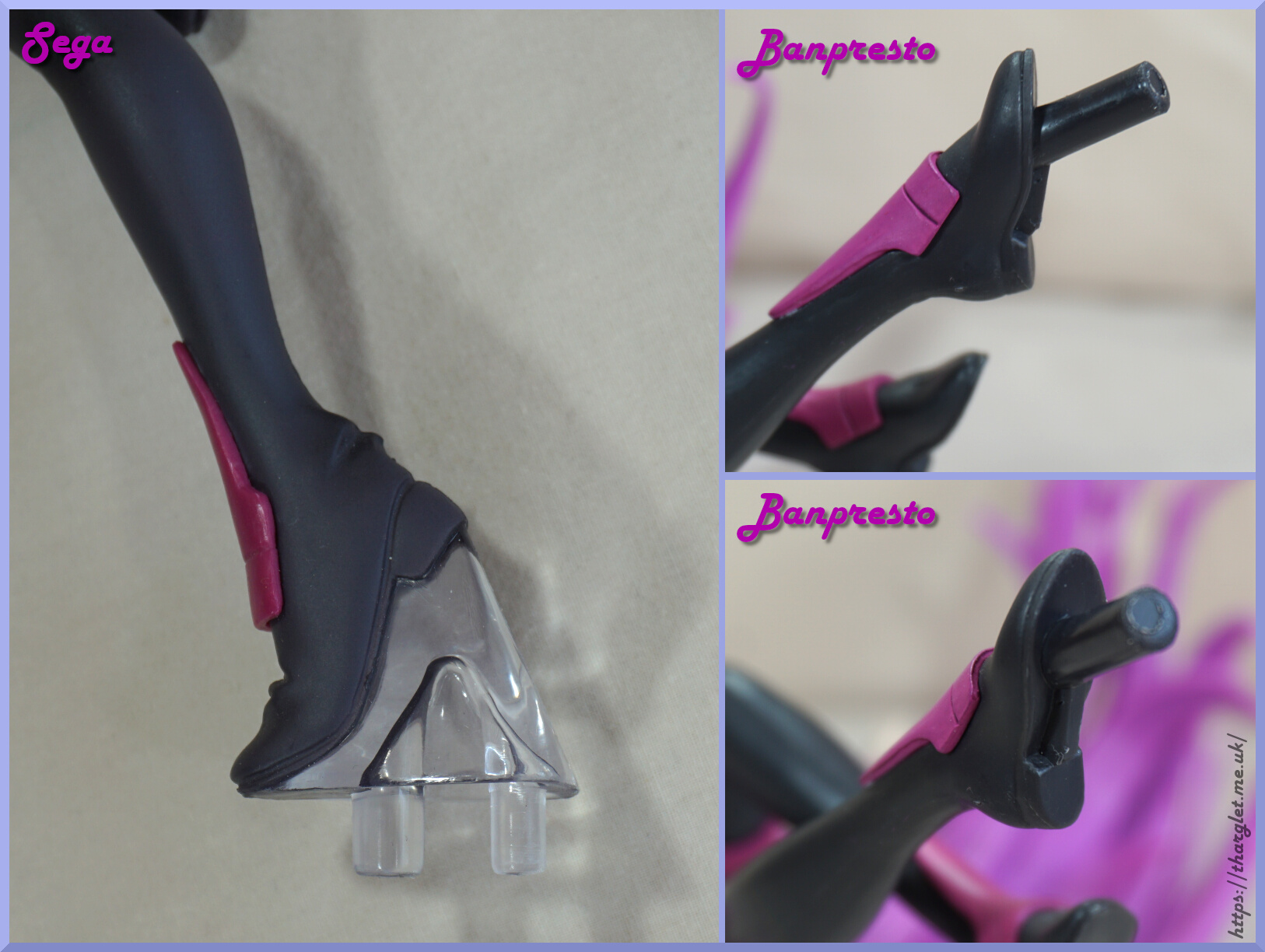 The Sega one comes pre-attached to her foot stand, whilst the Banpresto has an extra-long peg to push into the base. So Banpresto fully took advantage of giving her an opaque base here. Both of these provide a sturdy attachment point to keep the figure on the base.

This photo was done after the photoshoot, attempting to capture the viewing angles that I believe the manufacturers were aiming for: 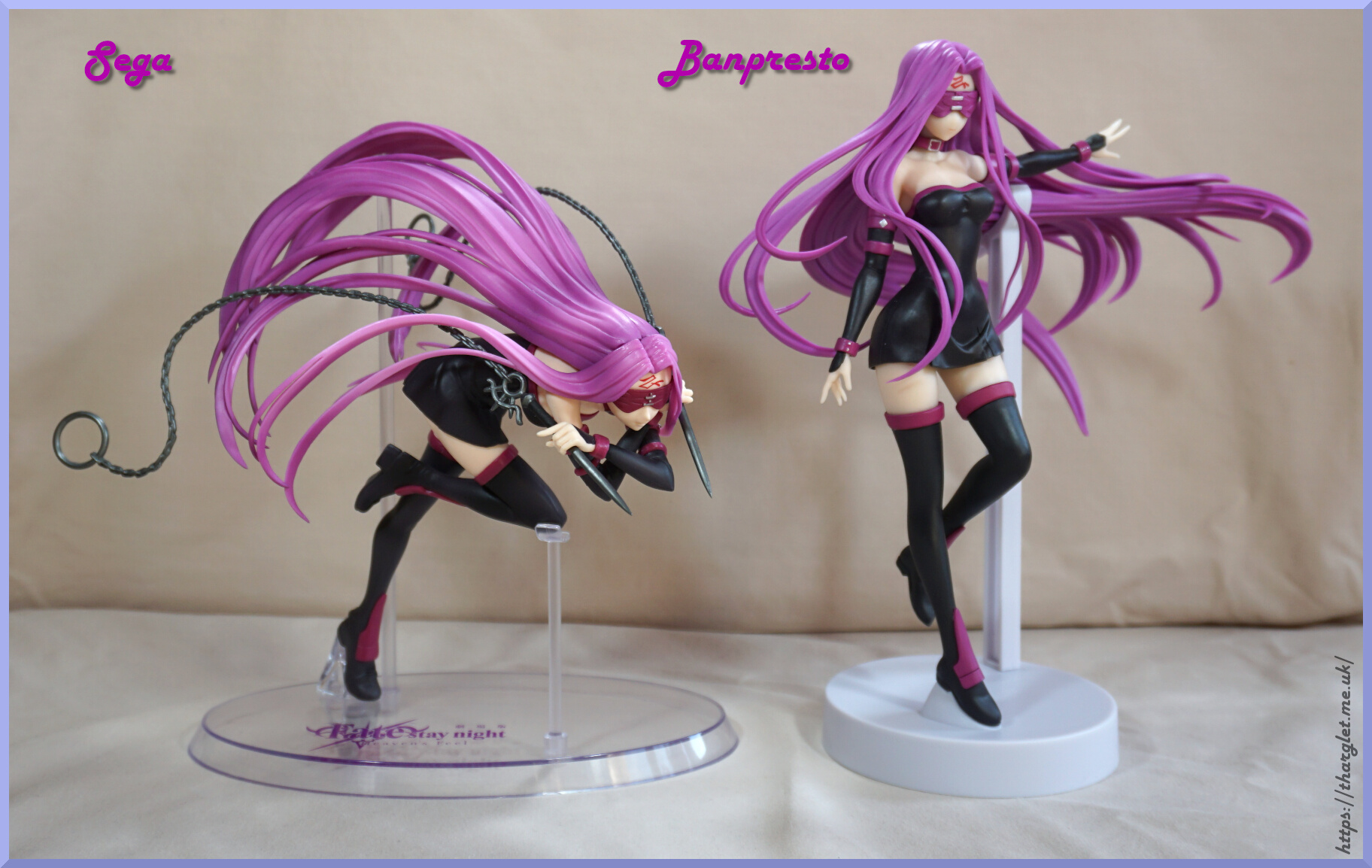 And here’s a spin-around of other angles: 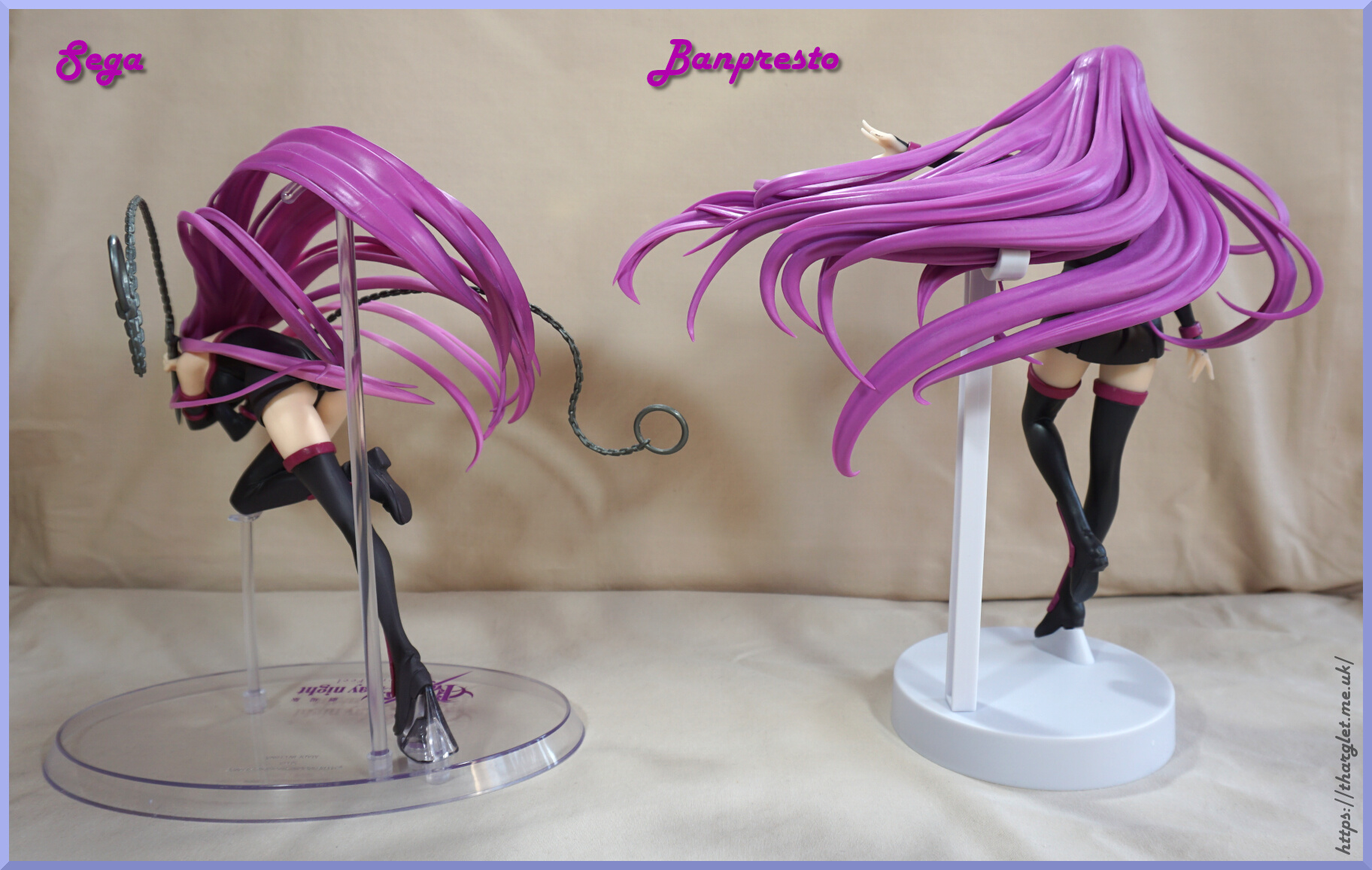 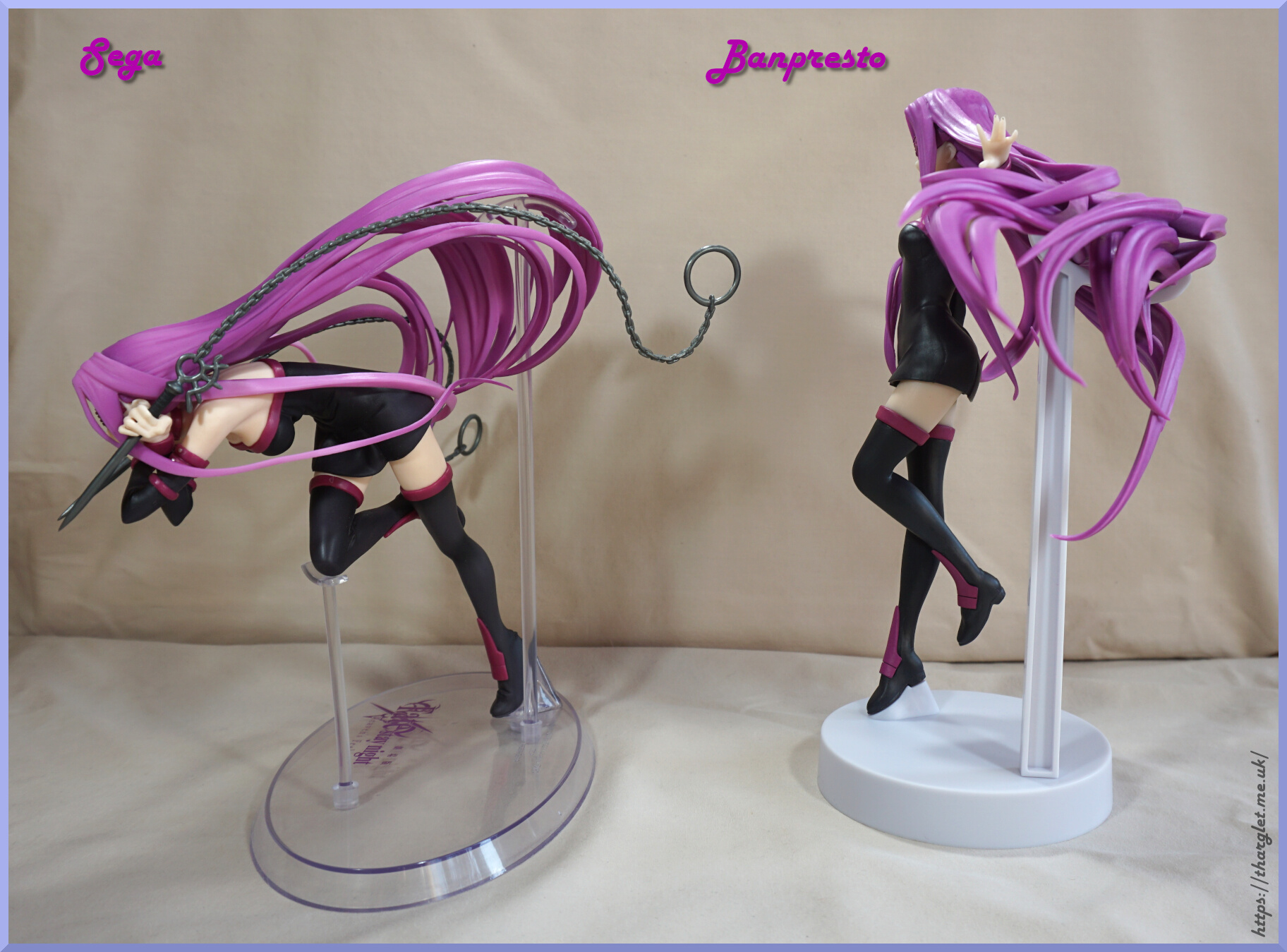 Both are dynamically posed, the Sega one moreso than the Banpresto one. In terms of display, I think the Banpresto one is more flexible in where you can place it versues eye-level, but the pose is more eye-catching and different on Sega’s.
The hair stand is definitely less obtrusive on Sega’s, but Banpresto’s doesn’t look as bad as I thought it might, and the intended display angle does help hide it to some extent. 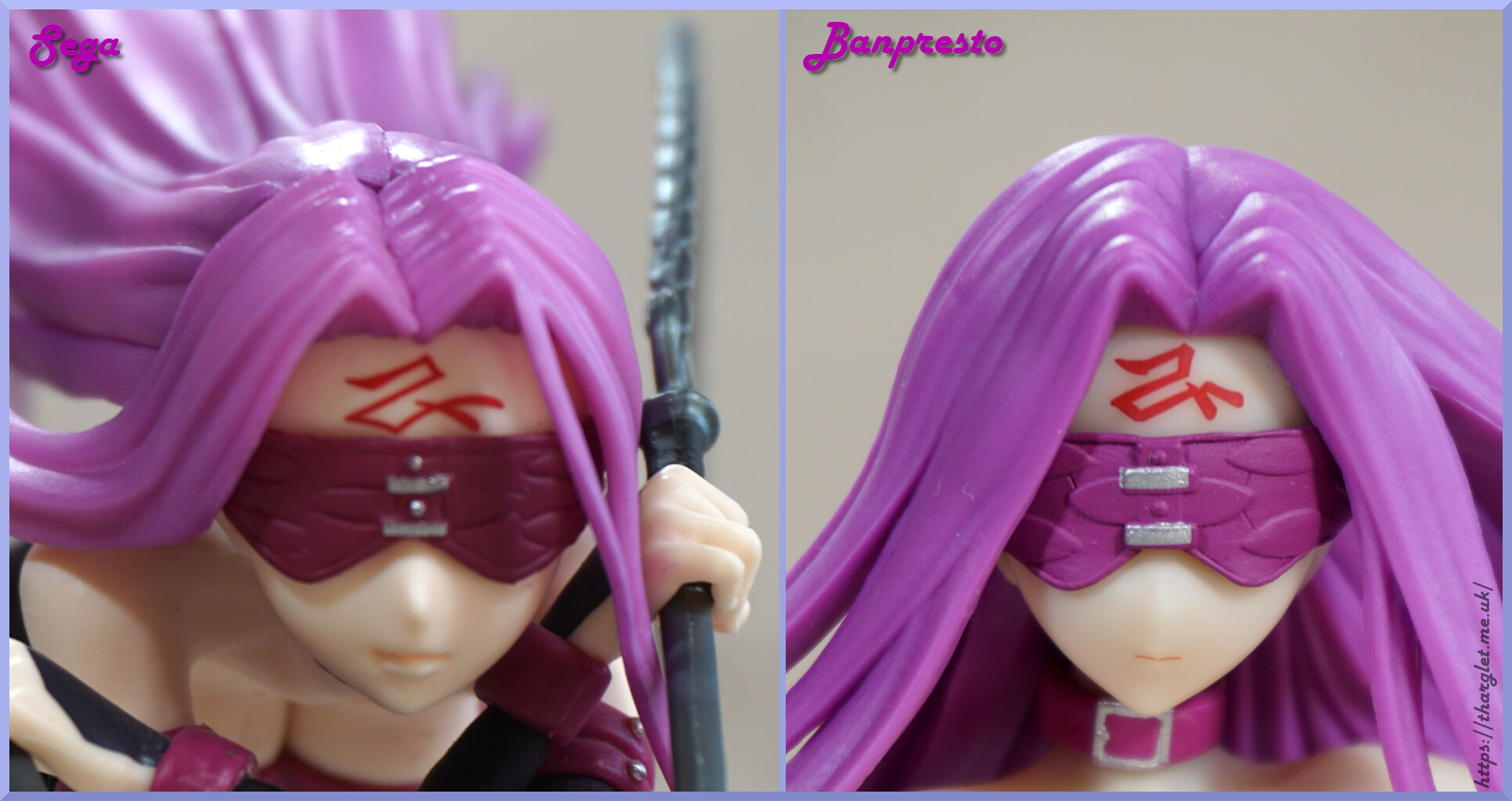 The rune on her forehead looks different on both – though to me, they both look slightly off in different ways. The Banpresto one is a bit too thick and not quite elongated enough whilst the Sega one feels a bit closer, but has been squeezed vertically, leaving it slightly misshapen.
With the masks, the Sega one has had the dots painted silver, whilst this was skipped on the Banpresto one. Also I think Sega’s is closer to her intended mask colour, especially in contrast to her hair.
Her nose and lips are more prominent on Sega’s, which I personally prefer. However, I can see people being a fan of the Banpresto one, as it has a more anime-ish vibe to it.

Here they both show their prize figure roots (…geddit?) and have pretty visible seamlines in their hair. Sega’s has a bit more gap in it, but you really need to be looking at the figure at specific angles to notice it. The Banpresto ones are a bit more noticeable, if you’re looking closely at the figure as they’re very much there when looking at her from the back or the top.
With the moulding, they’re both pretty typical for prizes, and do lack some of the detail a scale would have, but look fine for their price point. 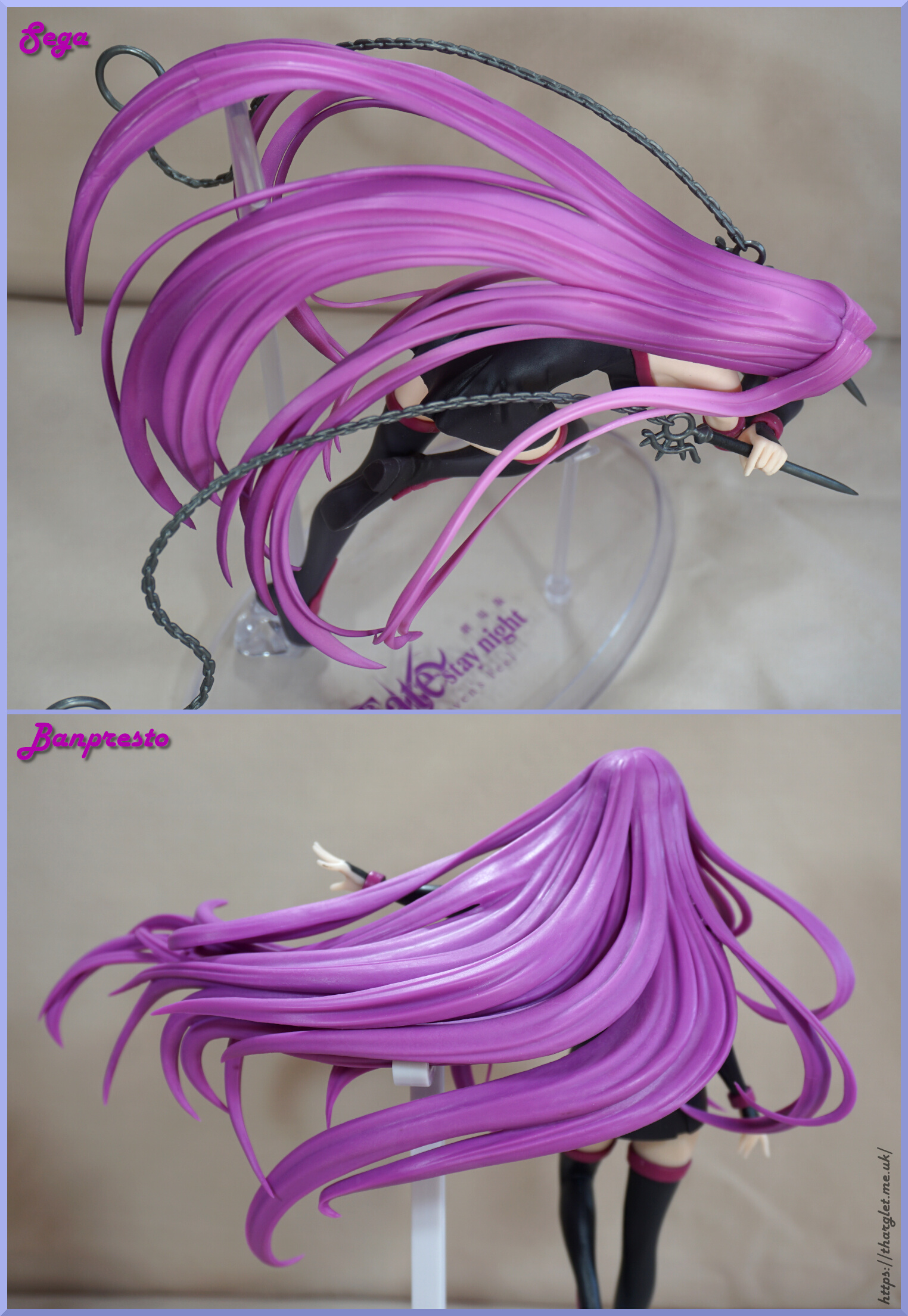 Here we can see the Sega one has some painted shading. The light/shadow on the Banpresto’s hair is all thanks to the lighting – picking it up and inspecting it makes it pretty obvious there’s no shading details on it. With her intended viewing angle, it’s not much of an issue, but looking at her from behind she does look rather flat if there isn’t strong lighting on her. 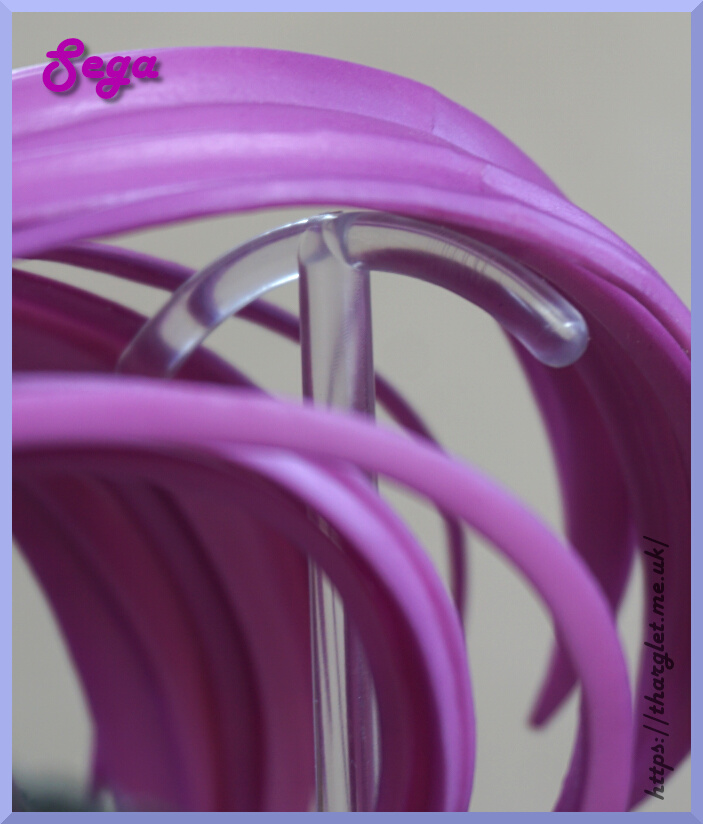 The Sega one does a good job of hiding in her hair, but the Banpresto one does a fair bit more supporting. It clips onto her hair to some extent, which will prevent it sagging over time. The Sega one is a bit more of a pain to position the hair onto, and I do wonder if the hair will slip a bit over time.
Both have super-flexible plastic hair, so they definitely do need these supports to not eventually sag. 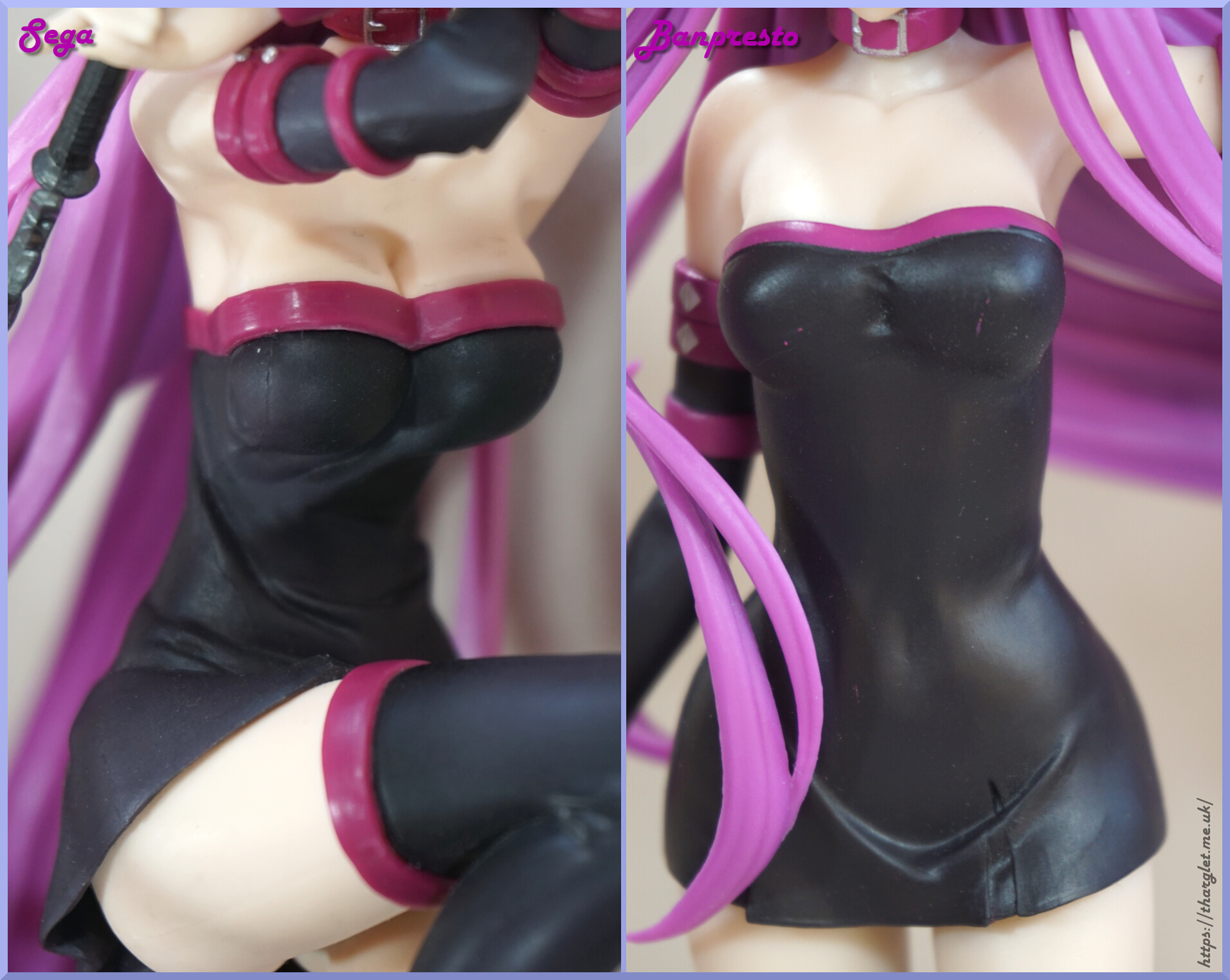 Both of these aren’t the best executed in my opinion,. I think the sculpts are OK for the black part of the dress, but both are let down by the band. The Sega one has a fat band of plastic that just looks odd and the Banpresto one hasn’t been painted well. The Sega one kinda gets away with it as this part is mostly hidden due to her pose. The Banpresto one doesn’t so much as it is up front and centre. I suspect most of the Banpresto ones will have similar paint flaws based upon previous prize figure experiences.
At least a couple of the purple paint transfers on the Banpresto one are from her hair – it took a bit to get her hair in the right places, and it did scrape one of her boobs. These tiny flecks aren’t uncommon on prize figures though, even without the figure scraping on itself.
With positioning of the hair – the Banpresto one came a bit misshapen, but was fairly easily bent back into the display pose that seems to be intended by the prototype pictures. For both of these figures, I wouldn’t be surprised if they both need their hair sorting if they’ve been in their box for awhile due to the plastic used. 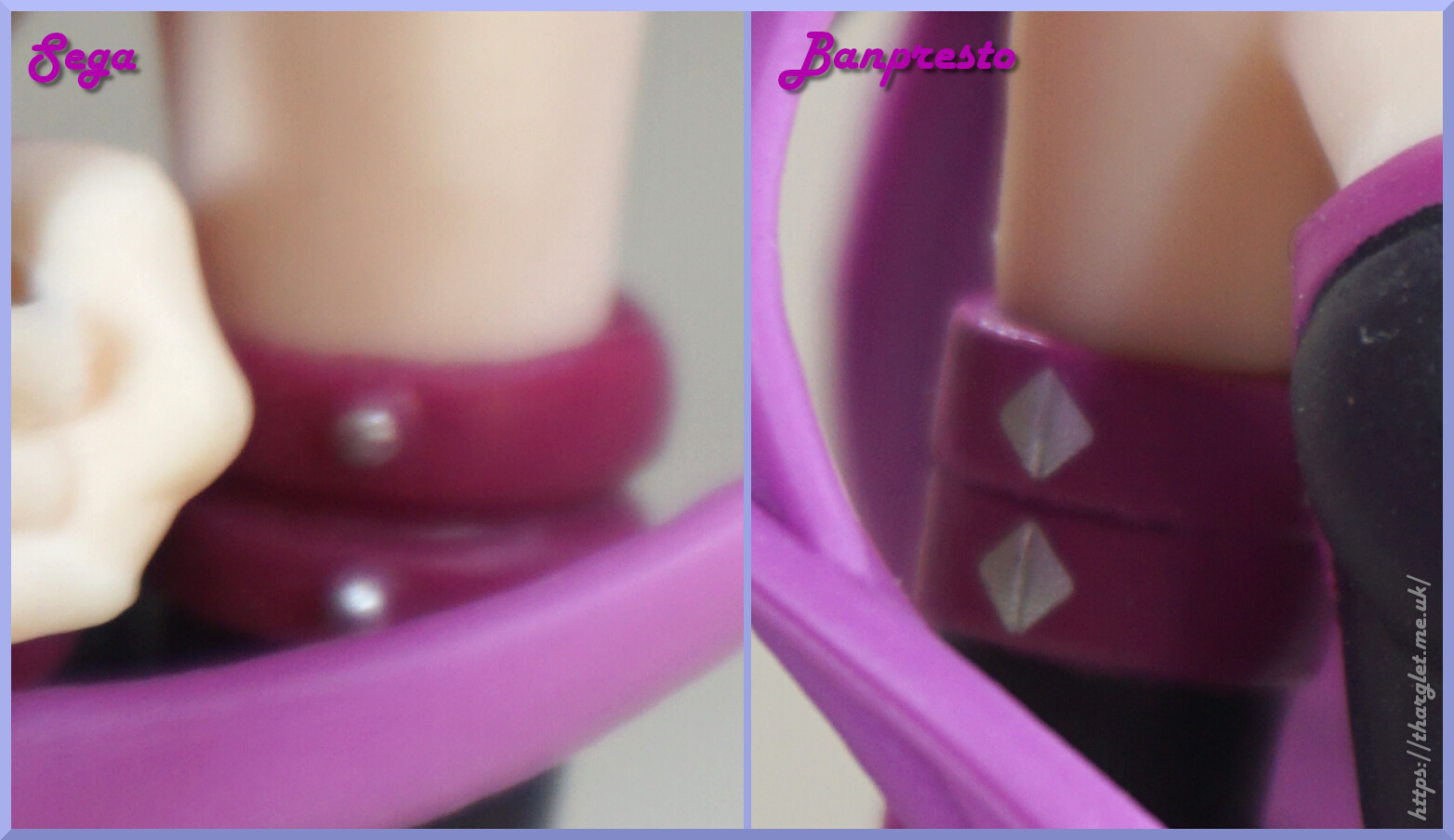 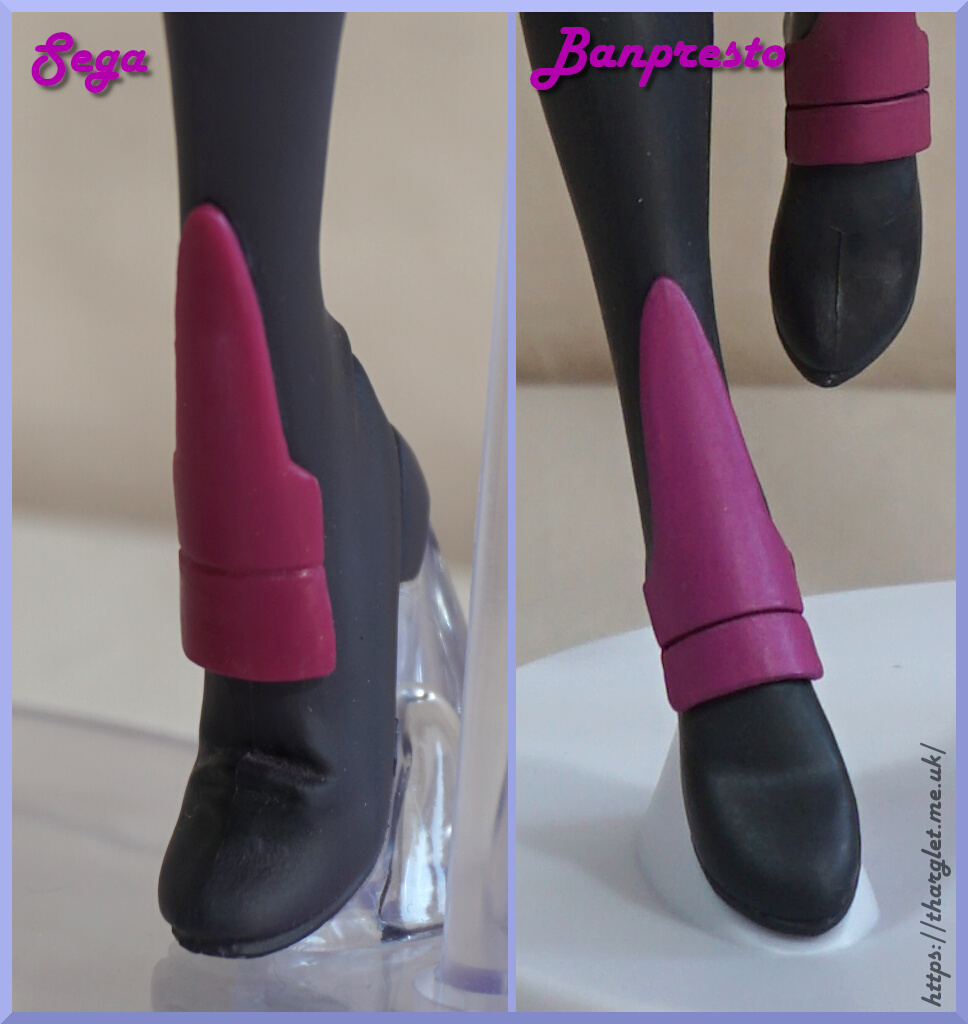 The purple detail looks better on the Banpresto one, as they have painted the line to separate the parts. The shape of it also feels a bit more refined than the Sega one. 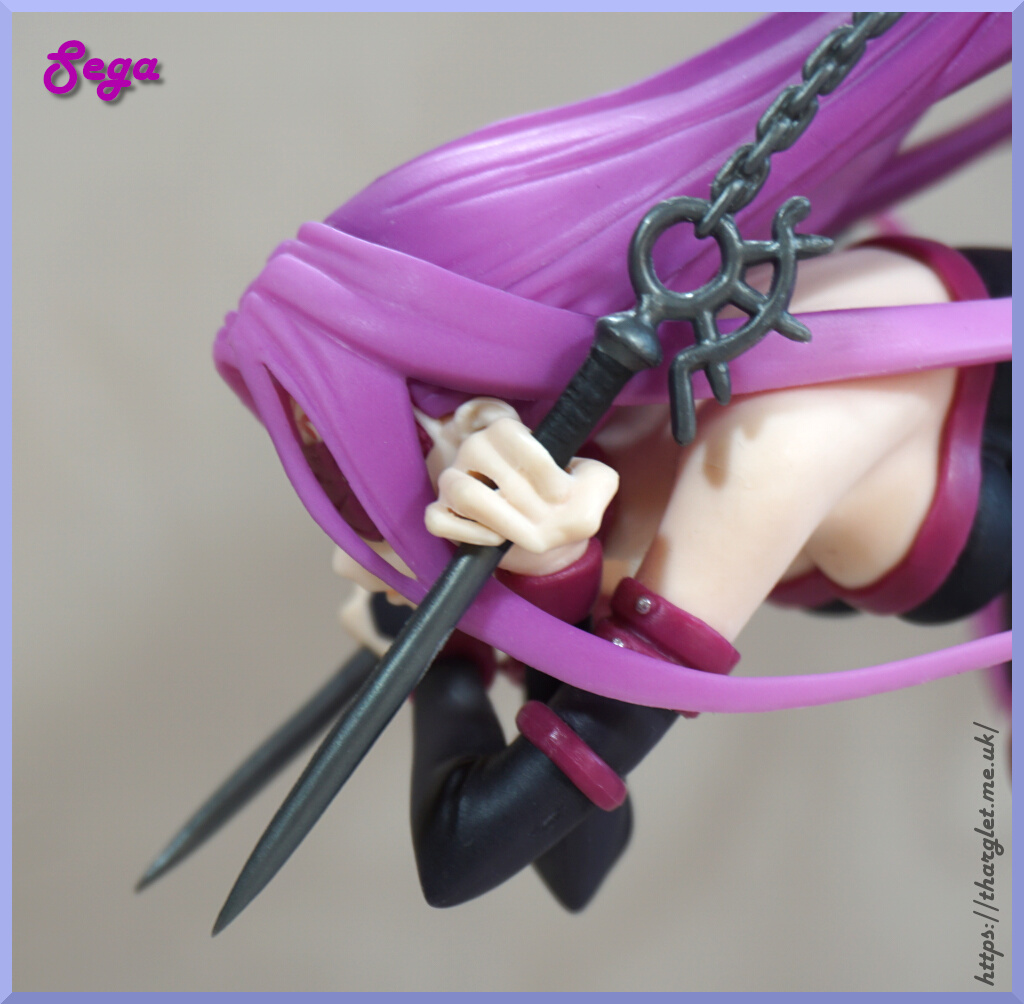 One feature that attracted me to the Sega one was the fact she had her weapons. They look decent for prize quality, and flow well with her pose. Her fingers have a bit misshapen plastic though on mine…

Chain running through her hair: 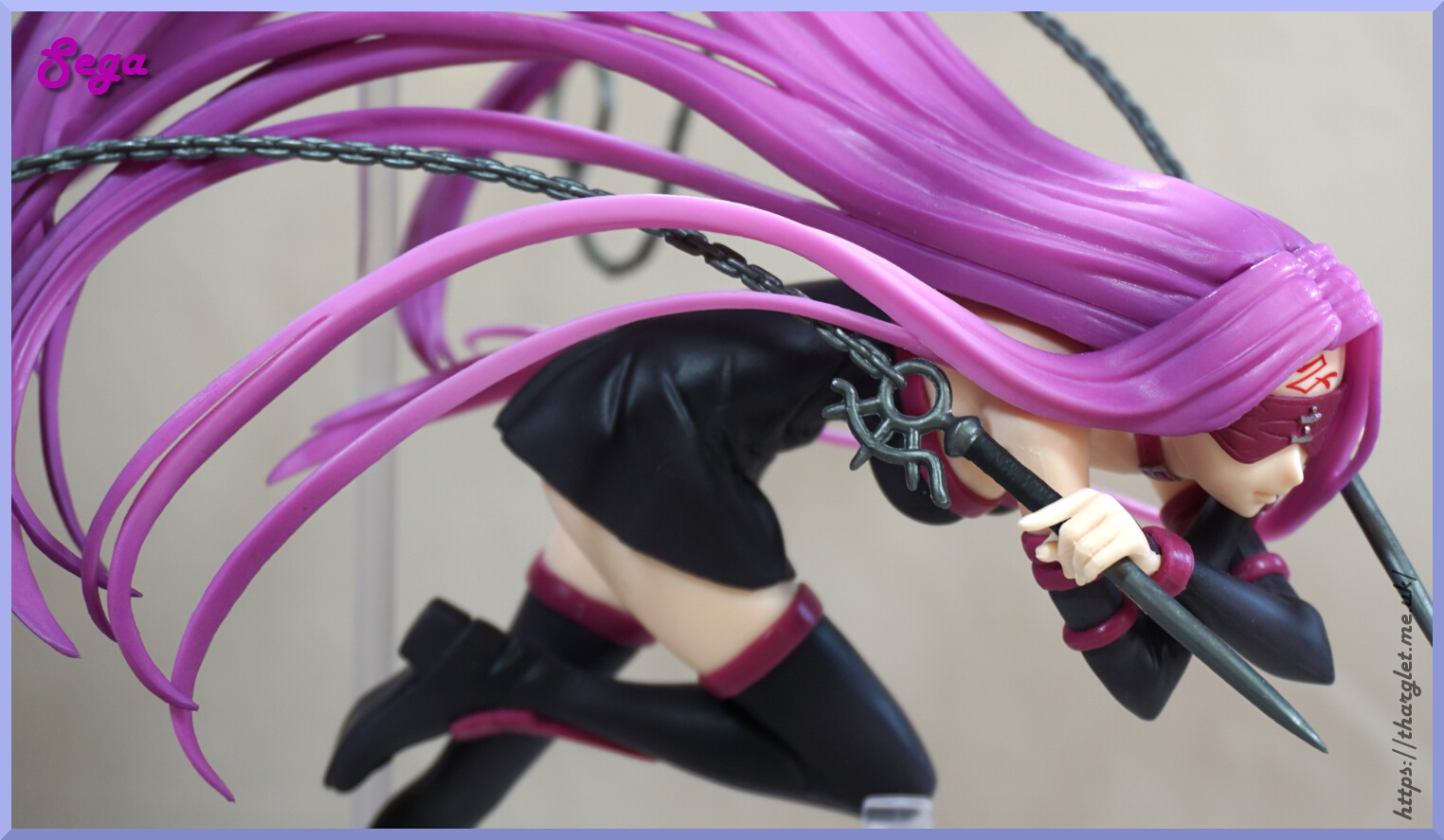 With the flexibility of her hair you can choose to have the chain running underneath some of the strands if you wish to give her a bit more of a dynamic feel. Or you can have the chains outside of her hair if you don’t want to be worrying she’s about to tangle herself up.

Both are decent prize figures, but do have the flaws prize figures do. The shading is definitely limited, especially on the Banpresto figure, and both have parts that aren’t as neat as a scale would be. Her simple character design is fairly suited to being a prize figure though, which helps both prize figures look decent.
I think the Sega one is much closer to its prototype image – the hair seems to have changed a fair bit before production of the Banpresto one, as well as the surprise white hair stand. Whilst you could heat the hair up and position it closer to the prototype image, it’ll likely clump back together again due to the flexible plastic. I’d also expect her hair to sag down eventually over time if the hair stand piece isn’t used. A clear hair stand piece would’ve been appreciated, but not unexpected, as it would’ve added additional cost to the figure to have another plastic type in there.
If you collect Medusa figures, I think both are decent for their price point. If you had to pick one of the two, I think it falls down to personal preference – the Banpresto one would more easily fit into a collection, but the Sega one has a much more unique pose though it does come at the cost of being harder to find a placement that looks good. For me, I have the Sega one displayed “jumping down” from an upper shelf.
If I had to pick between the two, I would likely pick the Sega one – I love her attacking pose, and the stand is nicer, though slightly less functional for holding her hair up over time. Seeing as I don’t have to pick… I will be proudly displaying both :).