This figure was intended to be the first entry of Official vs Bootleg… and here we are at OvB number 9! This bootleg was released several months before the official product was released, so I was super-curious how it turned out.

I pre-ordered the official figure.

For this one, I did not get the box with the bootleg, so we’ll be skipping that portion – though the bootleg box is very different from the official from the photos I’ve seen. And like a good portion of S-Style bootleg boxes, it has a window whilst the official ones do not, which is a massive clue to it not being an official S-Style figure.
This figure also does not have any accessories, so it’s straight onto the base.

Yep, don’t think we can get much more different. Like the other official S-Style figures, the official base is a cog shape. For Shiro, her base is a darkish blue and does not have any pegs as she can stand on her own. The bootleg however… is a roundish fluffy thing that likes to shed feathers. Being cheaply made, its final shape cannot really be called circular, as it contains many irregularities.

For the official, we have the standard copyright notice and a central support to keep the base sturdy. The bootleg has been sewn to a piece of fabric, so there is some finishing work going on here. And no, they haven’t put any copyright info down here.

And here’s a picture for an exact size comparison:

Bootleg base is a decent bit bigger than the official. If the bootleg base was done more professionally, I think it could be preferable to the plastic discs these figures come with – they don’t tend to be well-liked. I think they’re OK, and I do like interlocking them when I’m displaying S-Style figures in a group, but I do agree some of them are a bit too gaudy-coloured.

Personally I display this figure with no base, so no actual points to award here really. As far as telling which is which, I’m not sure you could mix these two up. If the bootleg base wasn’t as poorly produced, I think it could be a contender for this figure as it is more interesting than a cog that doesn’t fit with the figure’s aesthetic.
Due to the fact the bootleg base sheds and isn’t a proper shape, I’d recommend buying something separately if you want her on a fluffy base. 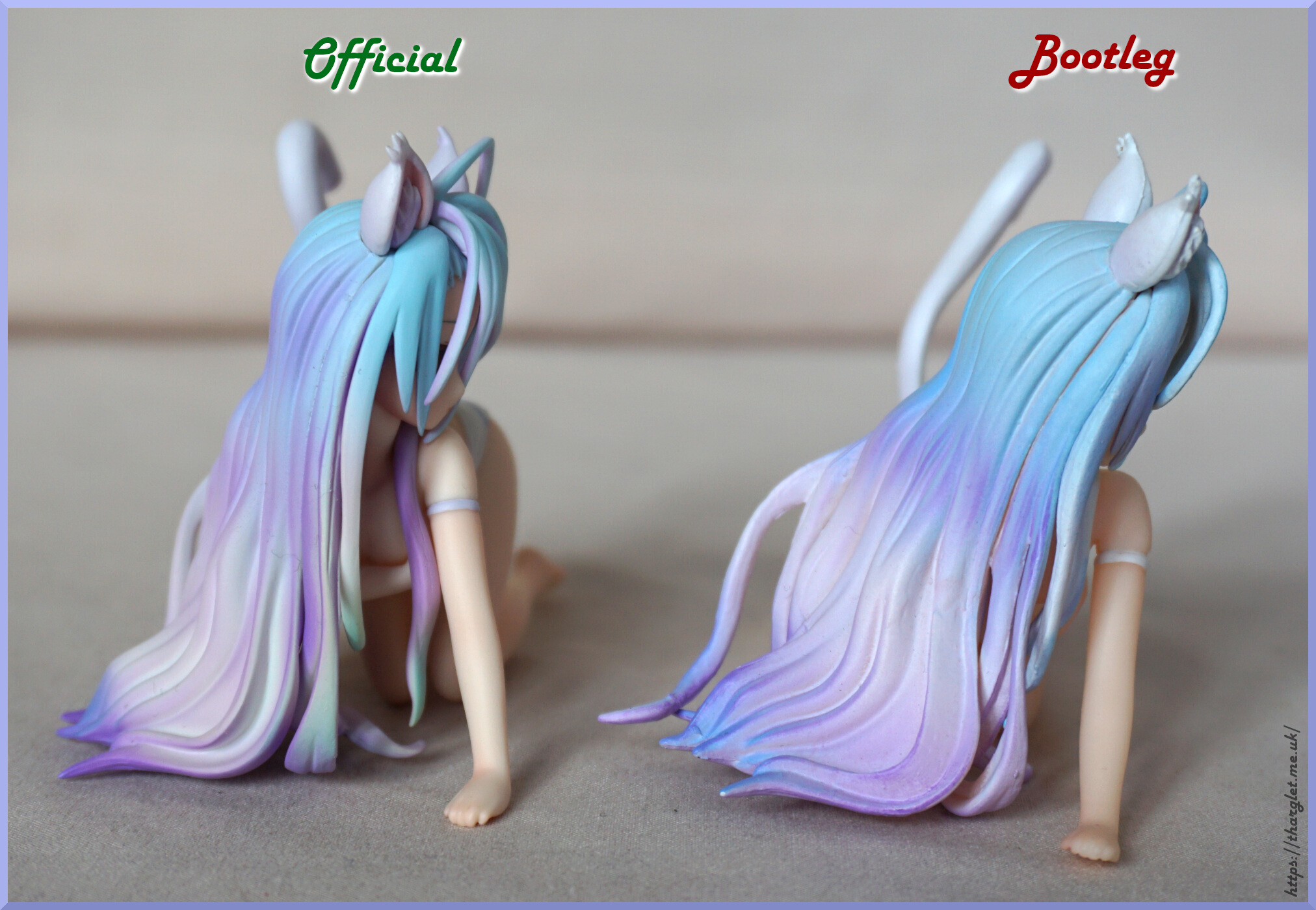 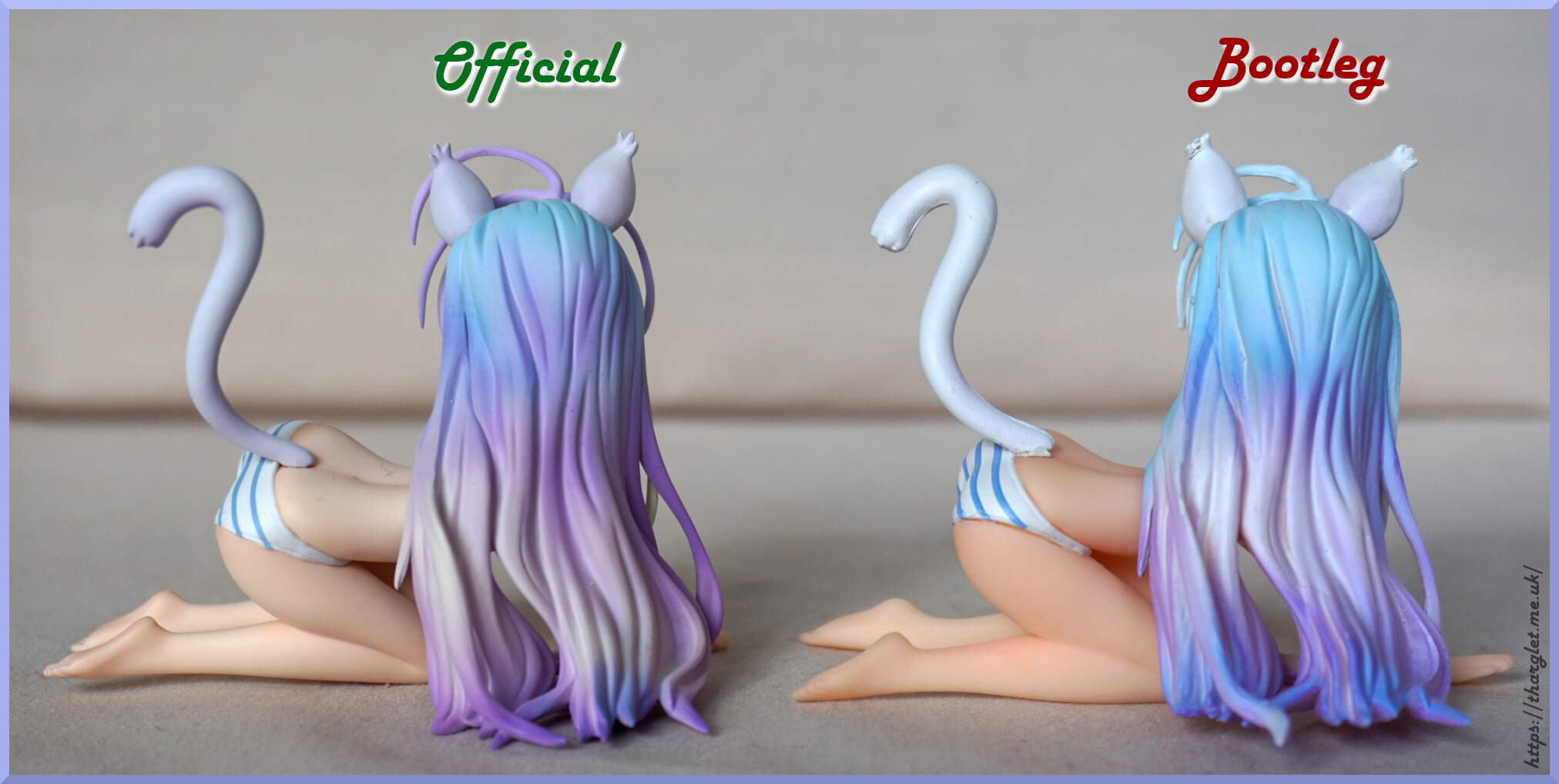 For the first photo, we can see how the official base design really doesn’t fit the figure, quite literally. With FREEing going for a very specific base design for this line, certain poses don’t work with it. It can be somewhat alleviated if you own multiple S-Style figures, as you can interlock the bases and have the figure stretch over two… or in this case, abandon the base entirely. The bootleg base is actually winning out here, now we have the figures on their respective bases. As the bootleg base obscures parts of the figure, the actual spin-around was done with no bases.
For the bootleg, we’re looking at sloppy paint and moulding throughout. Also her left arm is badly bent – I did fix this when I initially got the figure, but due to the flexible plastic she’s made from, it bent back up again. I decided to leave it like this for the blog, as this is the arm’s preferred state.

Eagled-eyed viewers may have spotted an oddity in the spin-around. However, if not, I did have an issue with the bootleg’s tail – originally it was attached but after a week or so it fell off as I think it was only being held on by paint: It left this hole in the figure: 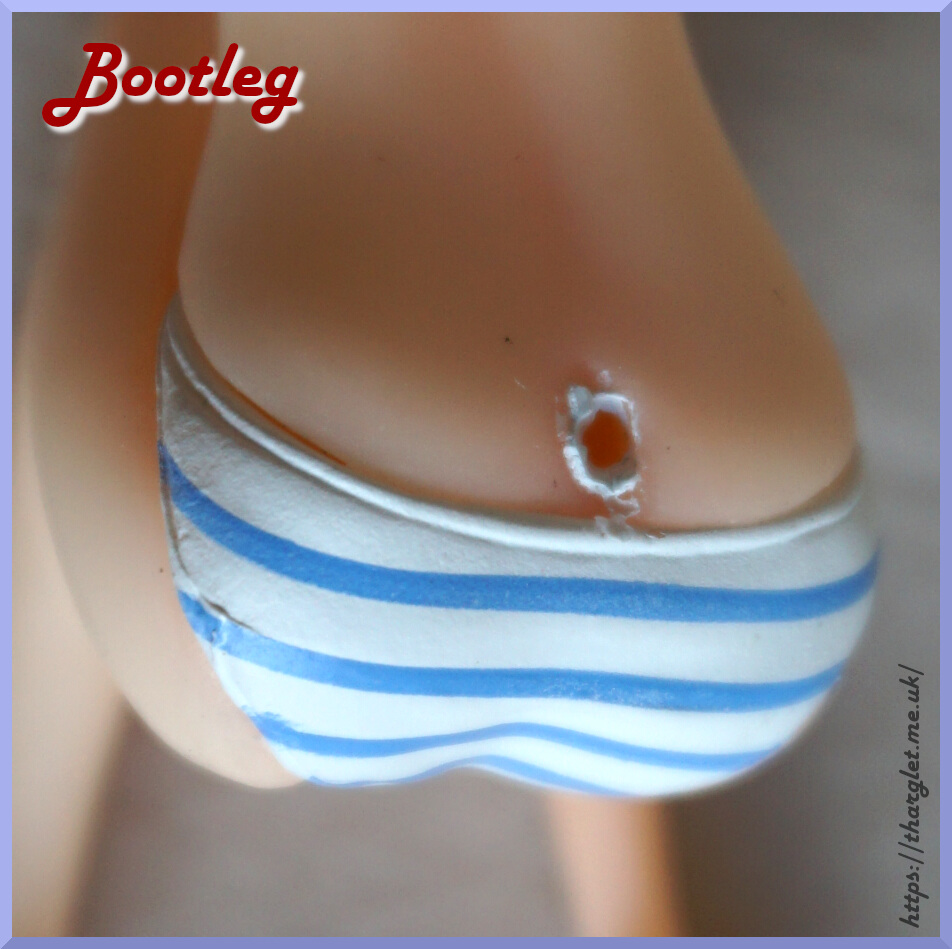 Not a great start! So to repair this I used some white-tack to hold it in place, which does show a little: 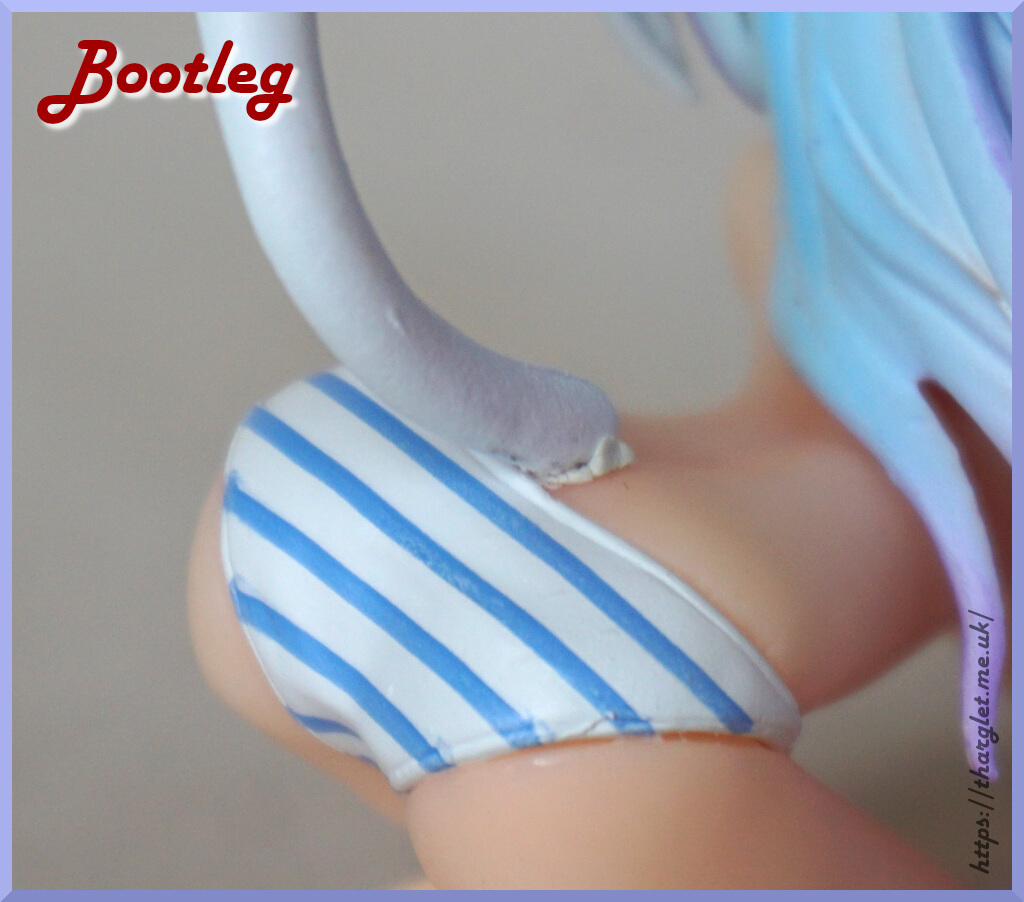 So that’s what that extra whitish blob is next to her tail, and isn’t part of this comparison. If you’re wondering why I didn’t glue it, that would be because it would take time for the glue to dry and the repair wouldn’t be guaranteed as the surfaces may not marry up enough for glue to take. And avoids accidentally adding some bonus glue to other parts of the figure, so decided this was the least effort and less chance of accidental disaster.

Now onto the face: 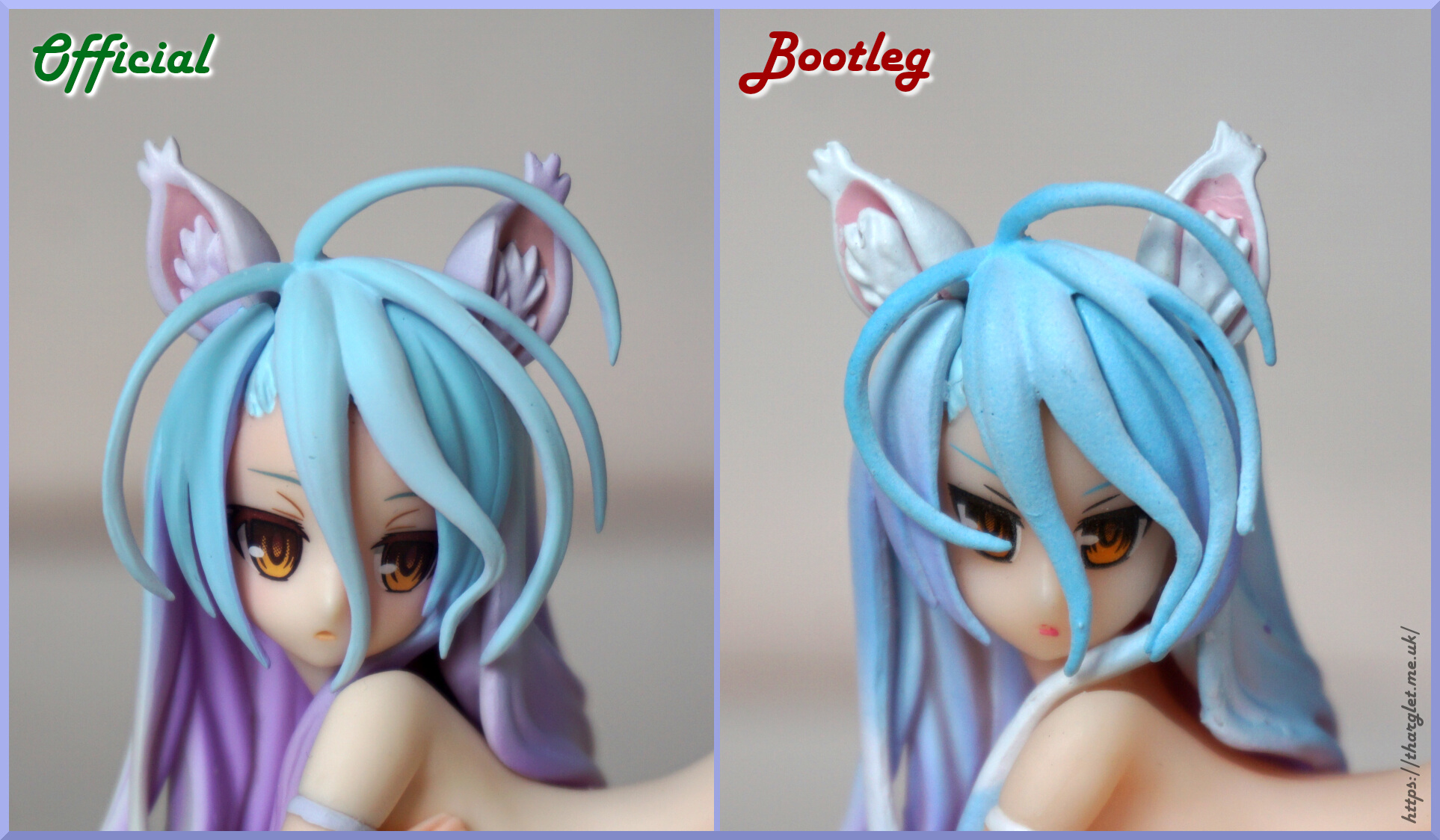 Bootleg Shiro’s face never ceases to amuse me – she looks very angry and sneery to me. Her eyebrows, eyes and mouth paint are responsible for this angry look. For the eyebrows, we’ve lost a line and they’ve now been done in black and the same blue as her hair, and very much angled inwards. The tops of her eyes seem to have the gotten a bit more of a severe angle too. To complete the angry look, the mouth paint has missed the intended spot, which makes it look a bit like she’s sneering.
Comparing the eye prints, the design on the bootleg looks like they’ve redone the design from scratch with maybe the prototype photos as a reference – we have two brown lines coming down on either side of her irises and the eye shine on her right eye merges in much more with the white of her eye.
Her hair is very much a mess, with lumpy paint and lumpy plastic. We can see where they didn’t bother sanding down the extra bits of plastic and any of the pointier hair strands don’t come to a sharp point. The ahoge-ish bit is also looking very sorry for itself, and is closer to her head.

Closer look at an ear: Yeah, the bootleg really suffers here. The sharp points are no longer sharp, with two now fused together by a blob of plastic. The fur detail in her inner ear is lost, and now we have something that almost looks like a furry paw. The pink paint has been haphazardly done on the bootleg, so it is not the shape of the ear as it should be. With the white parts, there is a lack of the pinky-purple shading of the official too.
Oh, and some paint slop and a bit of missing paint. Though my official has some tiny bits of missing white paint, as seen by this close-up – but these areas are very small to the naked eye, so I can see why this passed QC.

Top of her head:

Back of her hair:

The shading on the official is smoother and in less-defined blocks. Bootleg is typical bootleg with distinct colour blocks and mediocre blending. We’ve also got some weird neon blue at her hair tips to complete the bootleg’s look.

Bottom part of the hair: 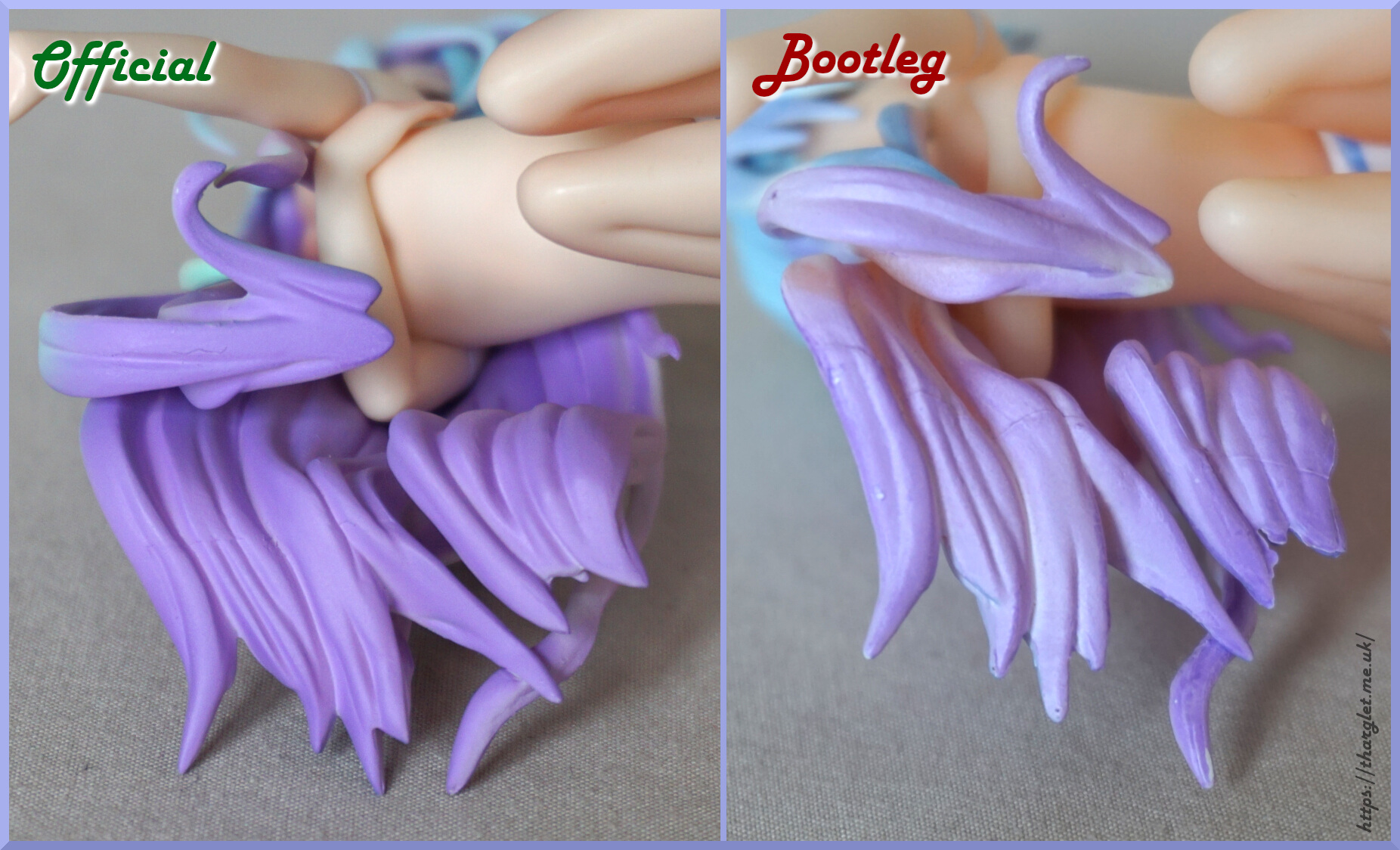 Let’s see if the quality continues where we can’t see. The official is just plain purple here, and the seam line is slightly visible but nothing too bad.
Bootleg… well, they tried. Seam line isn’t hiding at all, and the purple paint has been roughly slopped on, leaving certain parts bare or with brushstrokes clearly visible. Quite a bit of the mould detail is missing or distorted too – towards the left of the photo, there should be a bunch of hair clumps that are just not present, and the rightmost of the left section has a dimple that is missing on the bootleg. The official is painted neatly, in an off-white colour. The bootleg’s is very much white, and has a distinct amount of bleed over the edges. 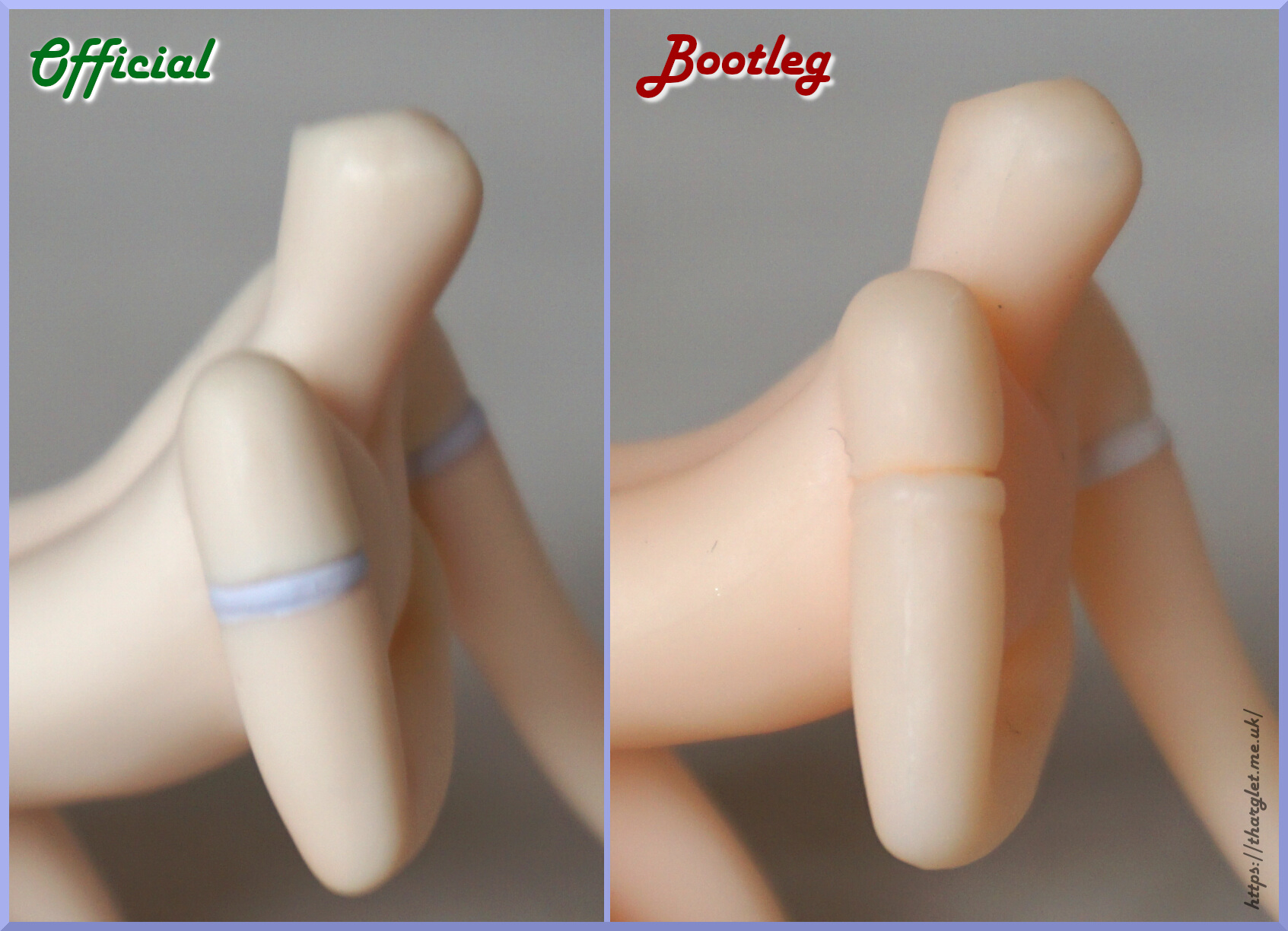 Here, we have some paint bleed on the official. But… the bootleg has no paint. Nada. Nothin’. Zip. Just a mutant arm that hasn’t been put together properly.

Whilst we have her head off, let’s compare the neck: 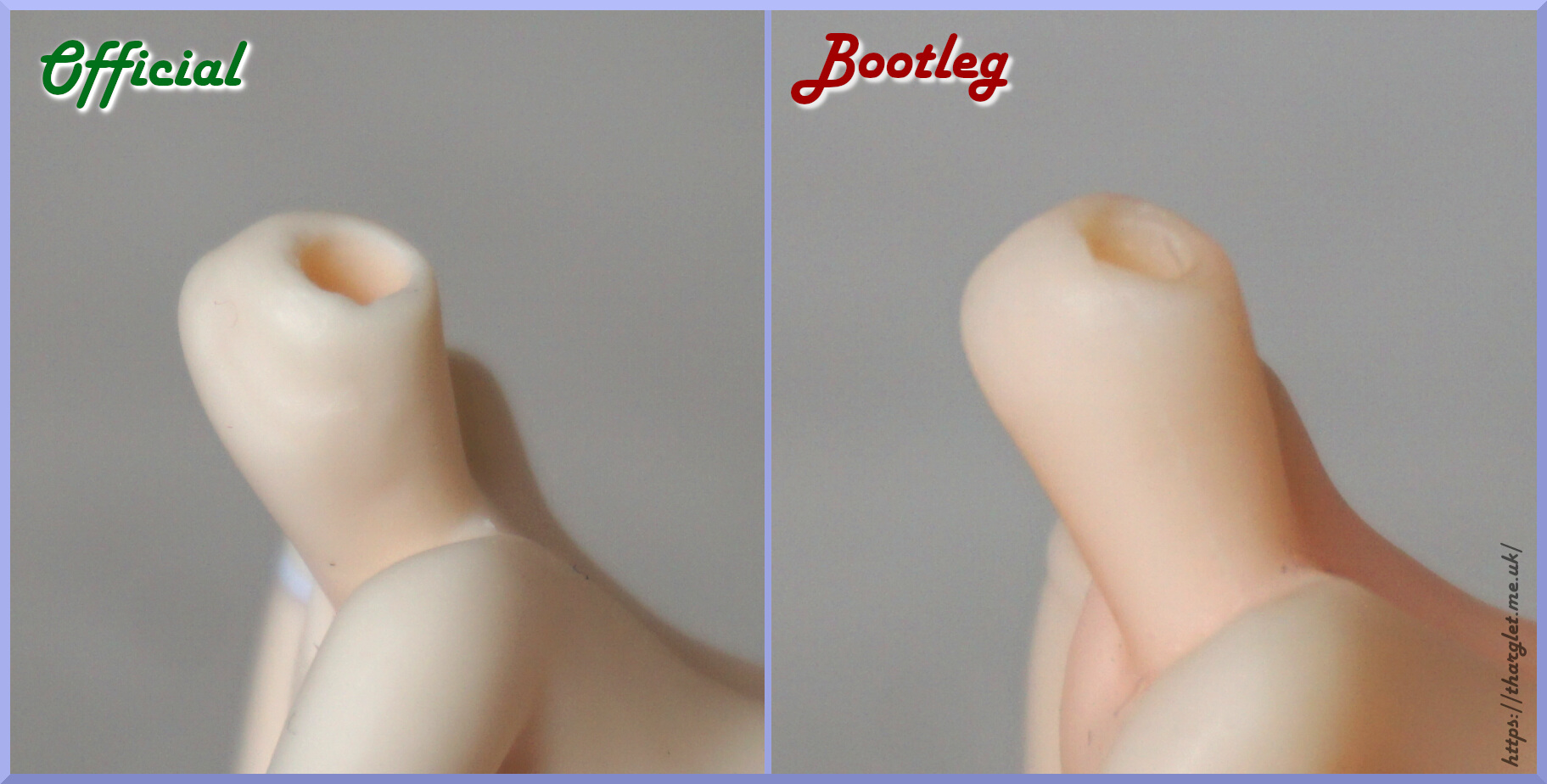 This bit was the part I was most curious about on the bootleg, before I got the original – had they modified the neck to be this monstrosity? How similar will the official be? Turns out, pretty dang similar, so she looks very strange with her head off.
The hole on the official is more towards her back which does stop her neck sticking too far away from her body – the strange shape is to make her neck look right for having her head turned.
The holes are slightly different in size, so a headswap doesn’t work terribly well without modifications:

As we can see, the official head simply sits on top of the bootleg body due to the peg being too large. The bootleg head sits slightly oddly due to the too-small peg. To me, the bootleg head looks very sorry for itself when pictured like this. The colours blend very nicely on the front strands of hair on the official, and all the parts that are usually not seen are painted evenly in purple.
The bootleg, on the other hand, looks like a clumpy mess, with some random shading suggestions in her hair. The purple is sorta thrown on the hidden parts unevenly, leaving large parts white – Shiro should only really have white hair at the very top of her head.

This was one area I was expecting the bootleg to suffer… and it does. The fingers are flatter than they should be and are pretty indistinct. The official one actually manages to look like fingers, though not super-detailed due to the scale. 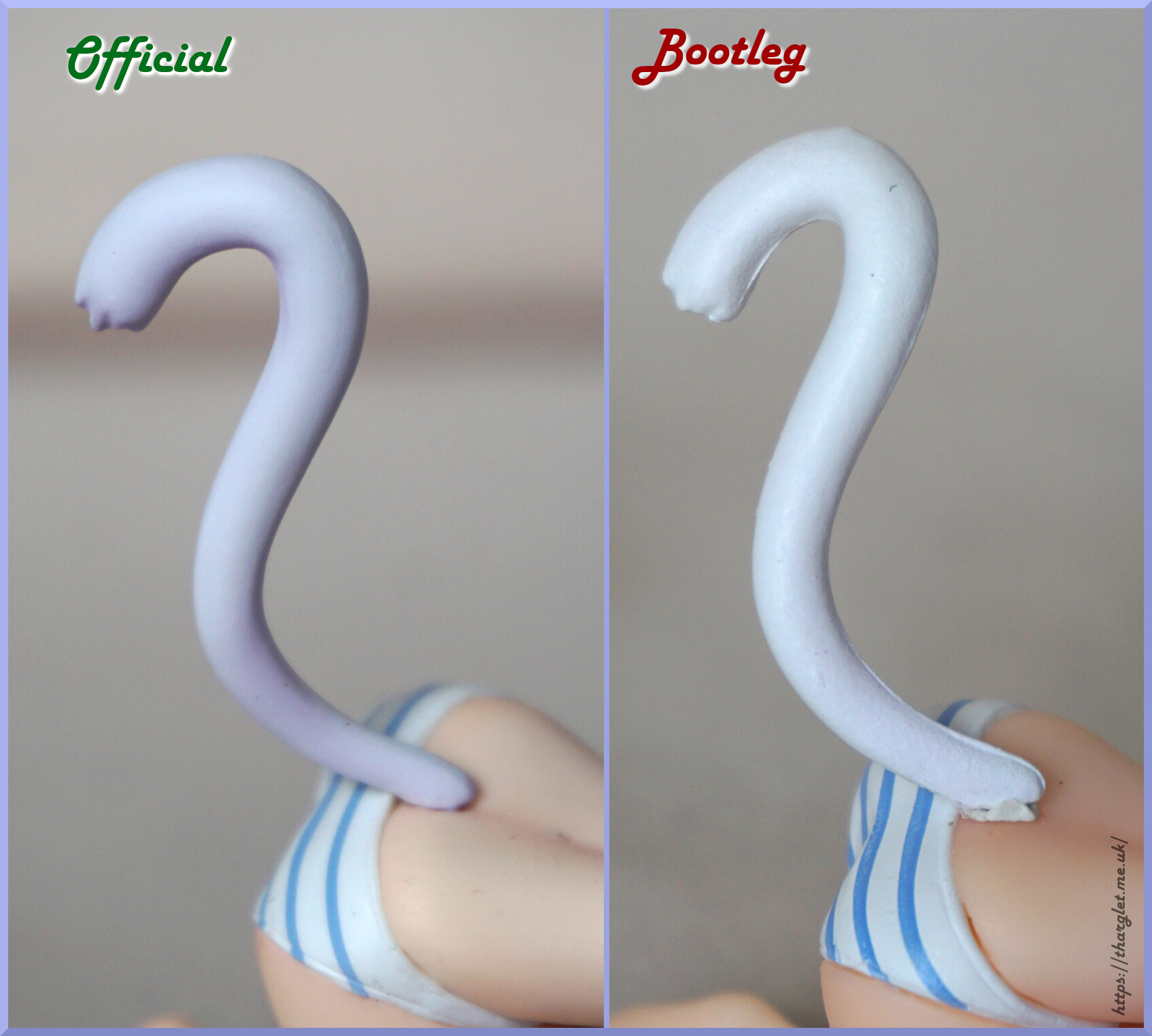 Well, we already know the bootleg tail is somewhat of a disaster… let’s analyse it!
For the official, we have some purple shading, and the seam line isn’t obvious. It also stays attached.
Bootleg we just have white paint here, and a very distinct seam with a bunch of flashing at the bottom. It also has a natural tendency to lean – it was very bent over when it first arrived, and will slowly lean over time. Official I’ve had since release, and no bending to report thus far.

Unfortunately was quite hard to do this shot, but the bootleg mould is a unrefined version of the official one.

Welcome to the blog if you’ve scrolled down to find these!
Bootleg panties are definitely not superior to official ones. The lines are thinner on the official, and much more neatly painted. Bootleg lines suffer from a lack of paint and a lack of staying in the lines. Her right leg is also not properly attached, leaving an unsightly gap. The official gives the impression her tail is slightly pushing her knickers down, but that’s entirely lost in the bootleg imo. The small amounts of paint shading look better on the original imo – the bootleg she just looks kinda slightly sunburned.
The quality of the plastic is so much better on the official – it doesn’t have that weird finish to it, and the thinner parts on the bootleg have gone semitransparent, which isn’t very humanlike. Or nekolike. Maybe Cheshire-cat like, but that’s not what we have here.
The toes also shows the poor quality of the moulding, along with the hand we previously looked at, which leaves the bootleg looking rather odd.

The bootleg is pretty easy to tell apart from the official – there are a number of flaws that can be looked for, but an incorrect base would be a massive clue you’re not looking at the official product. If you’re looking at just the figure, if it’s bent up and lacks the purple shading, then you’re looking at a bootleg.
Would this figure satisfy the less morally-inclined budget-conscious shopper? I’d say no, as this figure is likely to deteriorate over time – having her front arm bent and her tail flopping does rather spoil how the figure looks, and then there’s the chance parts might just drop off. Overall the bootleg is pretty poor, and would have to be displayed at some distance to hide the flaws. If you can consider them able to be hidden at all.