oday’s blog features Q Posket Catwoman. As this is a small figure without any box or accessories, there will be a “bonus” blog next week featuring another Q Posket bootleg I ordered at the same time.

The official I bought unopened from Mandarake.

I ordered this bootleg as I was curious what I would get for the princely sum of £3. These small figures are usually sold without boxes in multilistings, so I decided to grab two and see how they turned out. The bases from the top are very similar, with the holes and the logos in the same place. The writing is thicker on the bootleg, and came pre-dusty. The “Q” looks copied, then for the “posket” the bootleggers have seemingly picked a font they thought was similar enough. It isn’t very similar though – the characters are thicker and lack serifs (the sticky-out bits at the ends of letters).
The leaf pattern around the edges matches with the official, which is a mild surprise given the half-arsed font match on the top of the base. As is typical, the official has copyright markings and the bootleg has nothing. The construction also slightly differs between the two – the peg holders on the official are one solid piece with the base but on the bootleg we have a part inserted to form the bottom of the pegholders.

Overall, the bases are very similar. There are two tells here – no copyright on the base, and the incorrect font on the top of the base. So if you see these displayed at a con unboxed, the easiest trick of inverting it to look for copyright notices holds strong (n.b. if there is no copyright for a Q Posket on the bottom, this is a surefire tell of a bootleg, however the inverse doesn’t 100% prove it is official, as in some cases bootleggers will do their best to duplicate everything). Not too dissimilar with each other. The main things that stick out for me is the more transparent goggles on the bootleg and much more skin visible as you rotate the figure. We’ve also got variations in the finishes, where the bootleg is duller in some spots but shinier in others.
Oh, and the zipper. For some reason on my official, this now has a tendency to point straight out. It is flexible though, so it can be pushed down more into the intended position. The masked part of the bootleg’s head is less shiny than the official, which can be seen via the window reflected on her forehead.
Going to skip the goggle lenses for a sec – on the bottom of her goggles is a bit of silver plastic sticking out… resisting urge to go snip it. The silvery parts of her goggles are quite rough-edged when looked at up close. The official holds up well, even getting this up close and personal with it.
OK, back to those lenses. The tint is much better on the official and looks more in line with how Catwoman should be. The yellow on the bootleg isn’t strong enough and doesn’t give off the luminous yellow/orange vibe that Catwoman’s goggles should have.
Comparing the eyes on the figures, her left eye is markedly different and the iris & pupil are up much higher on the bootleg than the official’s. The lower parts of her eye are also off on their own journey, leaving some skin in her eye area and the lashes in the incorrect position. When not looked at up close, the defects in the eyes aren’t too distracting though.
Underneath her left eye, we also have some paint damage which is definitely visible at a distance and looks quite offputting. Catwoman isn’t usually in the habit of having her face marred, so it looks quite odd.
The lipstick is pretty solid for a bootleg, though we do have some stray lippy going just above her lips. Official Catwoman has gone for a matte lipstick, whilst the bootleg has gone for a glossy look. OK, I think the obvious place to start here is… what’s happened with her chest?! The bootleg has been very much incorrectly assembled, and the chest area has been placed kind of on top of the jacket instead of recessed into it. To complete the mutant look, we have some yellowy skin paint slopped thickly over it. From the front, it’s harder to spot the error, but some angles look hilariously bad as it sticks over her collar.
Her collar has curled over more on the bootleg, and her zipper is in a flat, fixed position. The zipper pull on the bootleg can’t be moved without breaking it.
The zipper itself has lost a chunk of the moulding detail on the bootleg and doesn’t look as nice as the official, however the paint is correctly placed on both the official and bootleg.
Lastly, we have some glue slop on her jacket over her boobs, probably from attempting to glue the chest part in completely the wrong place.

Here we have more matte on the official and shiny on the bootleg. The official isn’t free of flaws, and we see some hairline markings in the plastic. However, the bootleg suffers much worse in this regard and has what looks like quite a scratched-up posterior when looked at up close. What is more visible to the naked eye though is the scratched paint that’s missing from her right buttcheek. That doesn’t look so good.
I think bootleg Catwoman got her catsuit from AliExpress, whilst the official Catwoman got hers from a much more quality store.

Pretty similar here, and the paint on her buckles is neat on both the bootleg and the official. The official we do have a little bit of flesh colour poking out – let’s take a closer look at that. 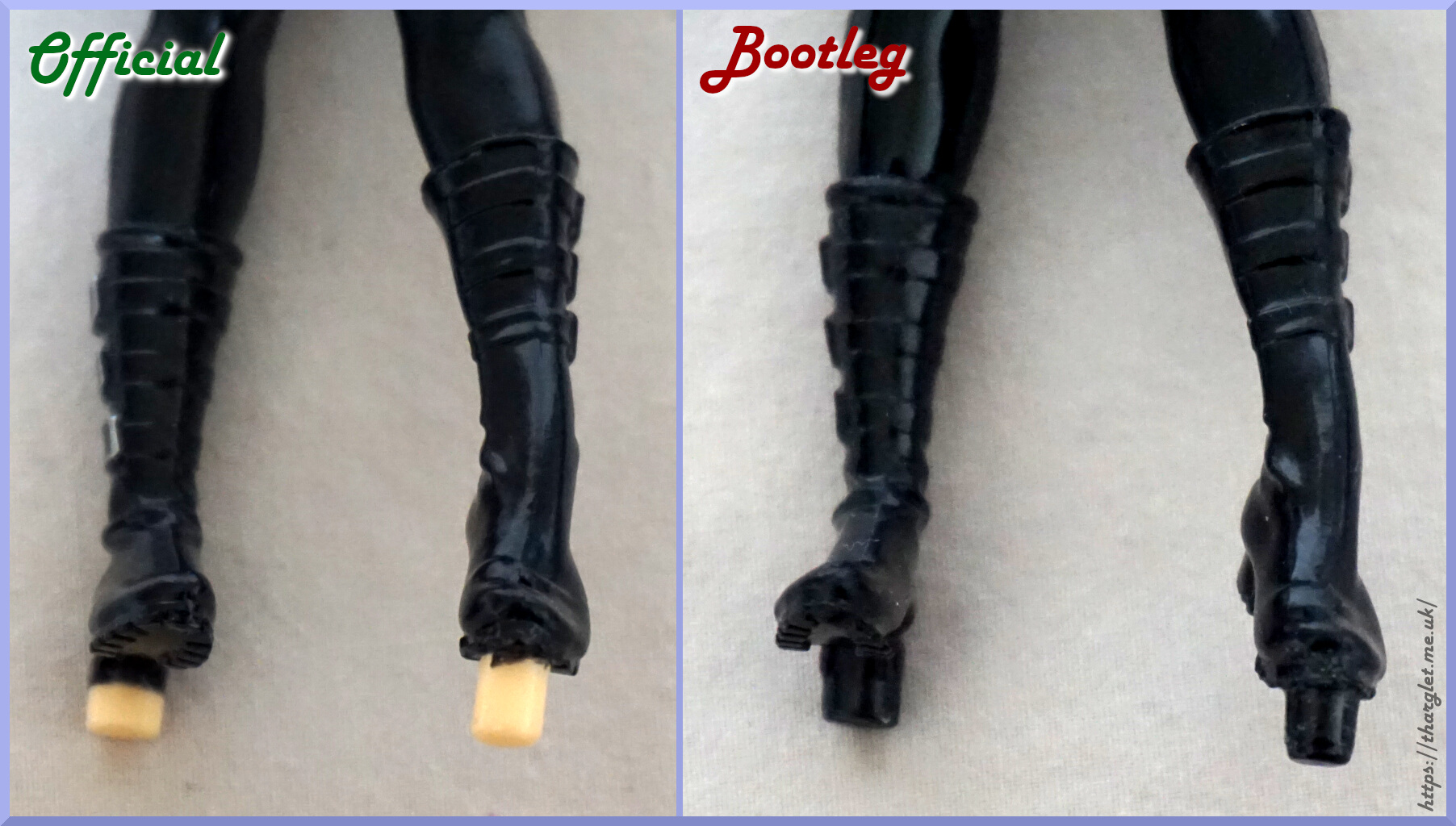 Honestly, this is one part where the bootleg I think is slightly better – having the black pegs means that the flesh colour can’t stick out by mistake. On the official, it’s supposed to let you know when you’ve shoved the pegs in fully, but it’s a bit awkward (at least on mine) which leaves a bit of a line visible on my official. It’s not a huge deal to me though.

OK, let’s pop her head off:

This figure starts of as three separate parts – head, body and base, which is typical for Q Poskets so her head is removable.
The bootleg’s collar has been painted not very well at all – the black paint isn’t dedicated to be either on the outward facing side or all the way over the top, as per the official. We’re missing some of the black paint on the bottom of the collar on the bootleg too, which ruins the look of the collar. Whoever was doing silver paint did a good job, though. Credit to silver paint guy.
For the official, the skin parts are just the colour of the plastic, the bootleg it’s all painted, which probably wasn’t the best idea but possibly cheaper than getting the right colour of plastic.
Overall, the paint on the bootleg here does nothing to alleviate the incorrect assembly.

Bottom of the head: 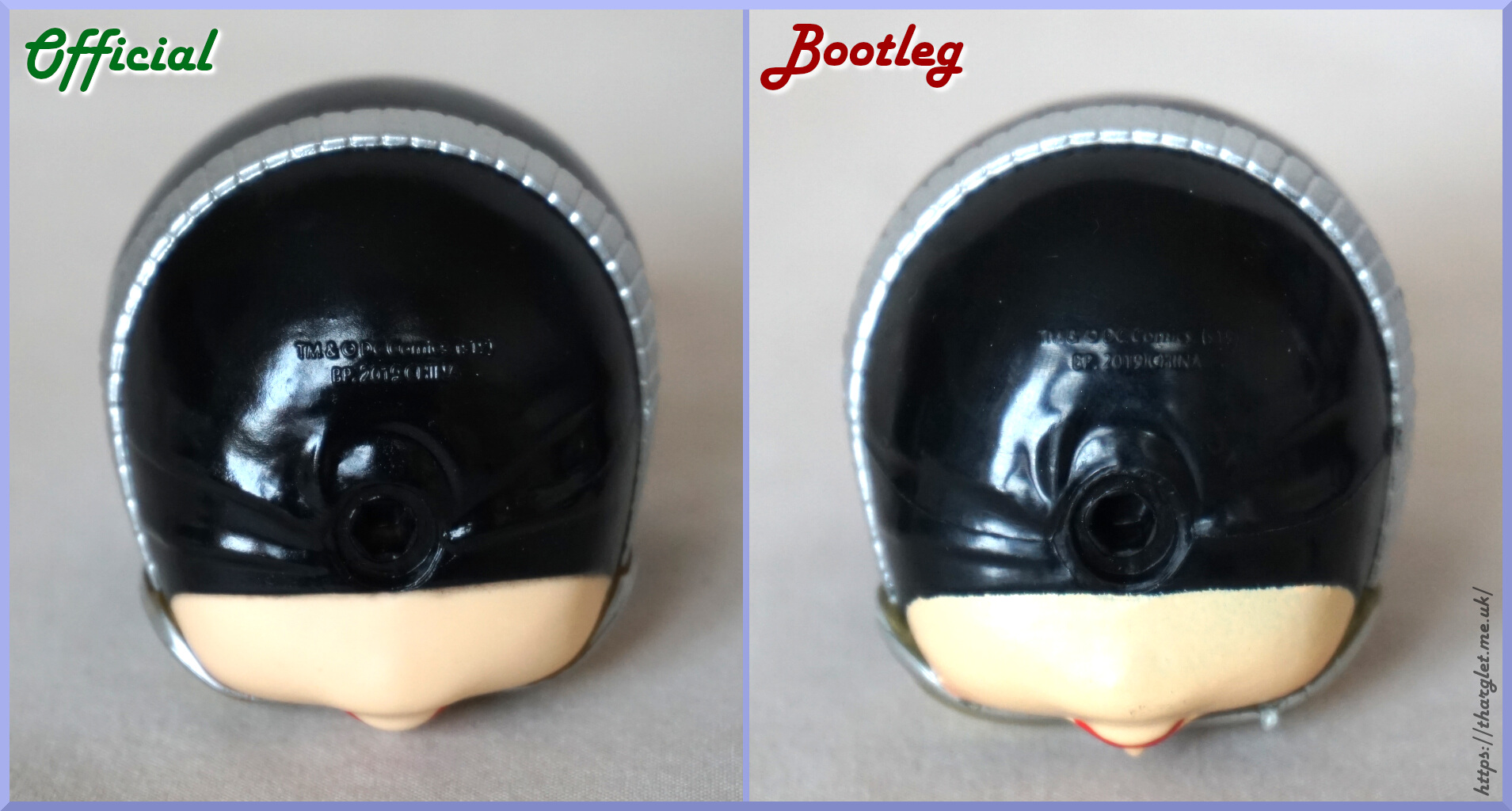 Bootleggers missed this copyright marking. Here there isn’t much difference between the two – some extra black paint slop on the bootleg. The band is a lighter silver on the bootleg, but this isn’t too noticeable unless you have both of them together.

Whilst we have them headless, let’s do a headswap: Yep, you can do this. Not entirely sure why you’d want to though, as the face and body of the bootleg are pretty flawed.
Also this is similar how I had the official displayed before I got the bootleg… initially I thought my official base was defective, but then I realised she’s supposed to be looking sideways when both sets of peg holes on the bases turned out to be the same, d’oh! So I have the bootleg to thank for that!

All in all, I’d say you get your £3’s worth out of the bootleg. It’s definitely flawed but… £3. That’s less than 4 American bucks. You can currently get the official version of this figure much cheaper than I bought it (is ¥600 at time of writing on Mandarake), so I’d recommend just buying the official currently for anyone vaguely interested in it.
Telling them apart is pretty easy, thanks to the manufacturing mistake with the chest, and the more transparent goggles. And if you’re still not sure, turning the figure over will reveal a lack of copyright on the base of the bootleg. So a pretty easy one to avoid if seen in the wild.