I promised another Q Posket blog, and here it is! The figure I bought at the same time as Catwoman was Harley Quinn.

The official figure I bought unopened from Mandarake.

This figure comes with Harley’s hammer, so let’s look at that first. 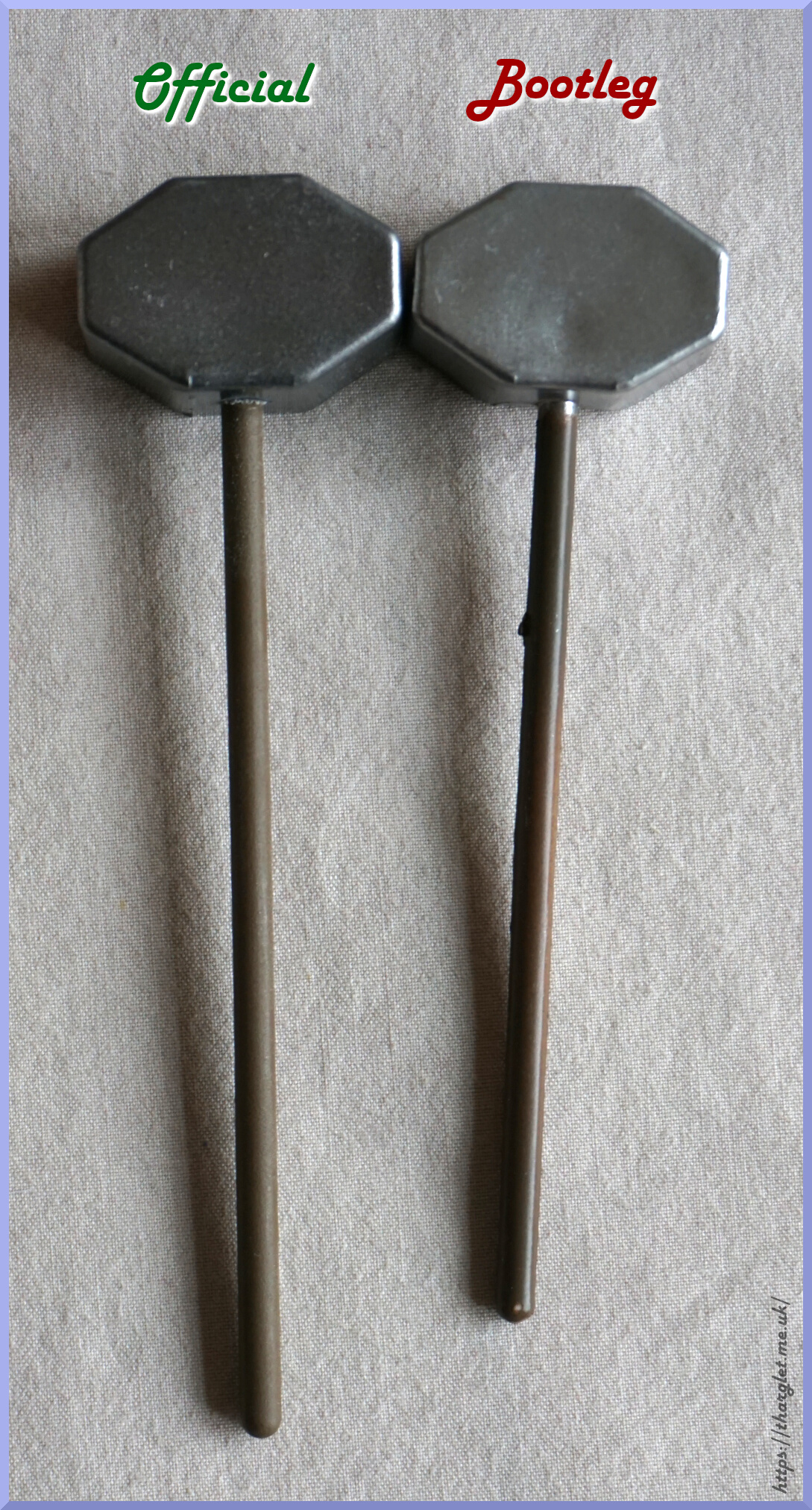 First thing that is immediately noticeable is the bootleg hammer is smaller – it is smaller in all dimensions, but the shorter handle is the most noticeable.
The bootleg has lighter coloured silver paint and a free dent on the head of the hammer. The shaft on the bootleg is a darker shade of brown and has a bit of excess plastic still attached. 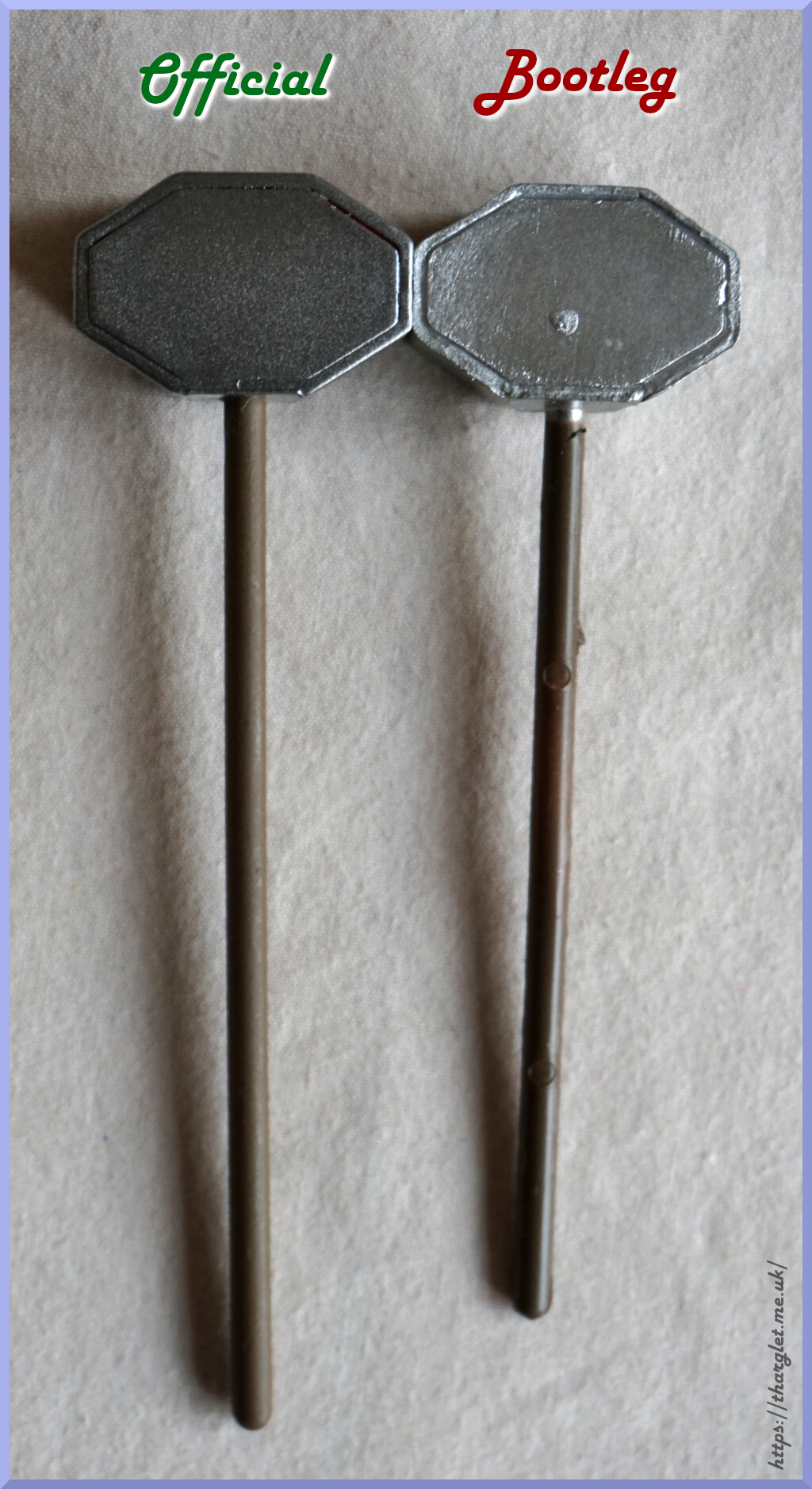 The underside on both can be told by the inserted plastic piece which leaves a seam on this side of the hammer head. Other than the seam, there aren’t any notable flaws on the official. For the bootleg though, the head of the hammer is very rough in places and my copy has a slop of paint in the middle of the flat surface. We’ve also got a couple of marks from the moulding process. Well, at least the bootleggers had the foresight to face these towards the back. 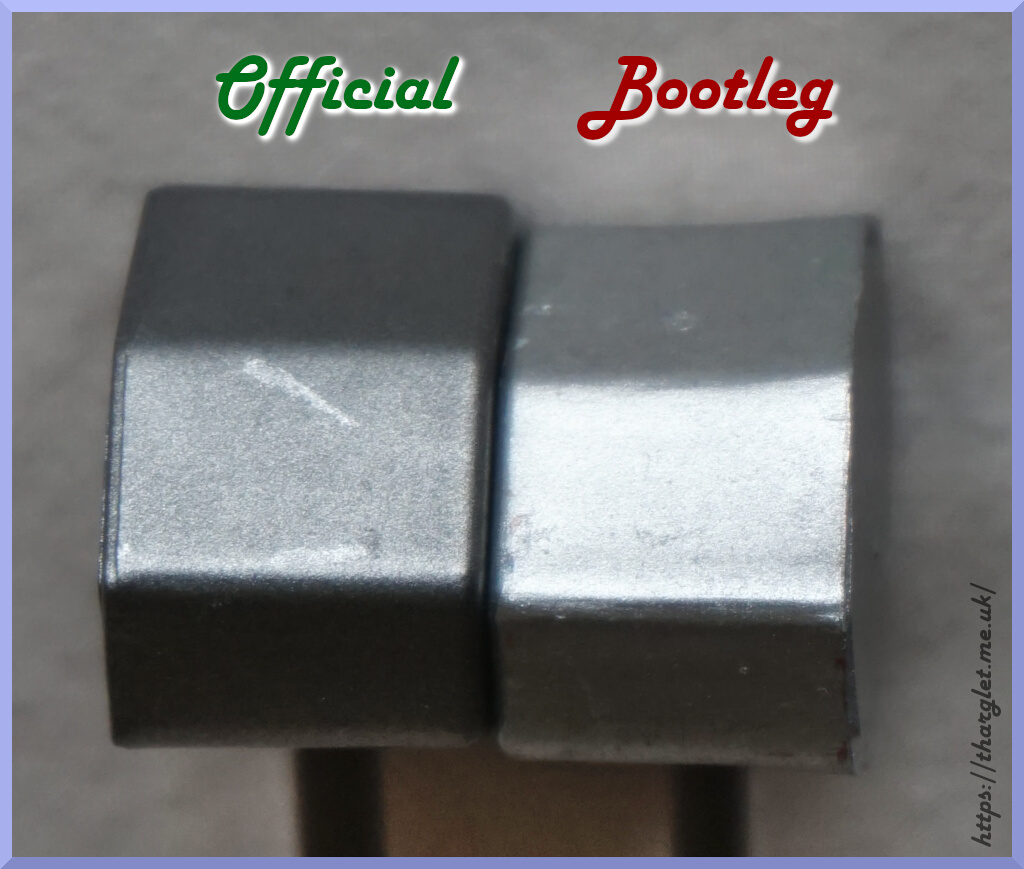 This time we have a defect on the official – part of the paint has been scraped off of the hammer, probably in transit. The paint is a lot smoother though than the bootleg, which has a bunch of knobbly marks from manufacture.

The official has the Q Posket logo and the bootleg has… nothing! The edging on the bootleg is much deeper on the bootleg, which is a bit of a trend reversal for moulding on bootleg figures. Can’t say it’s an improvement though. The bootleg base is also shinier than its official counterpart.
The bootleg base also has a very strange feature – a second hole. I have no idea why this is here, and it isn’t used for this figure, even in bootlegger’s photos of it. I do wonder if this is a previously bootlegged base that just happened to work for this figure or if it was an unintentional mistake when “designing” the base for production. If you’re wondering if the hammer can stand in the hole – the answer is no. Hole is far too big and top-heavy for that to work. Maybe if you stuffed some tack in it?
Both stands have pegs for her feet – both figures work fine on their respective bases. 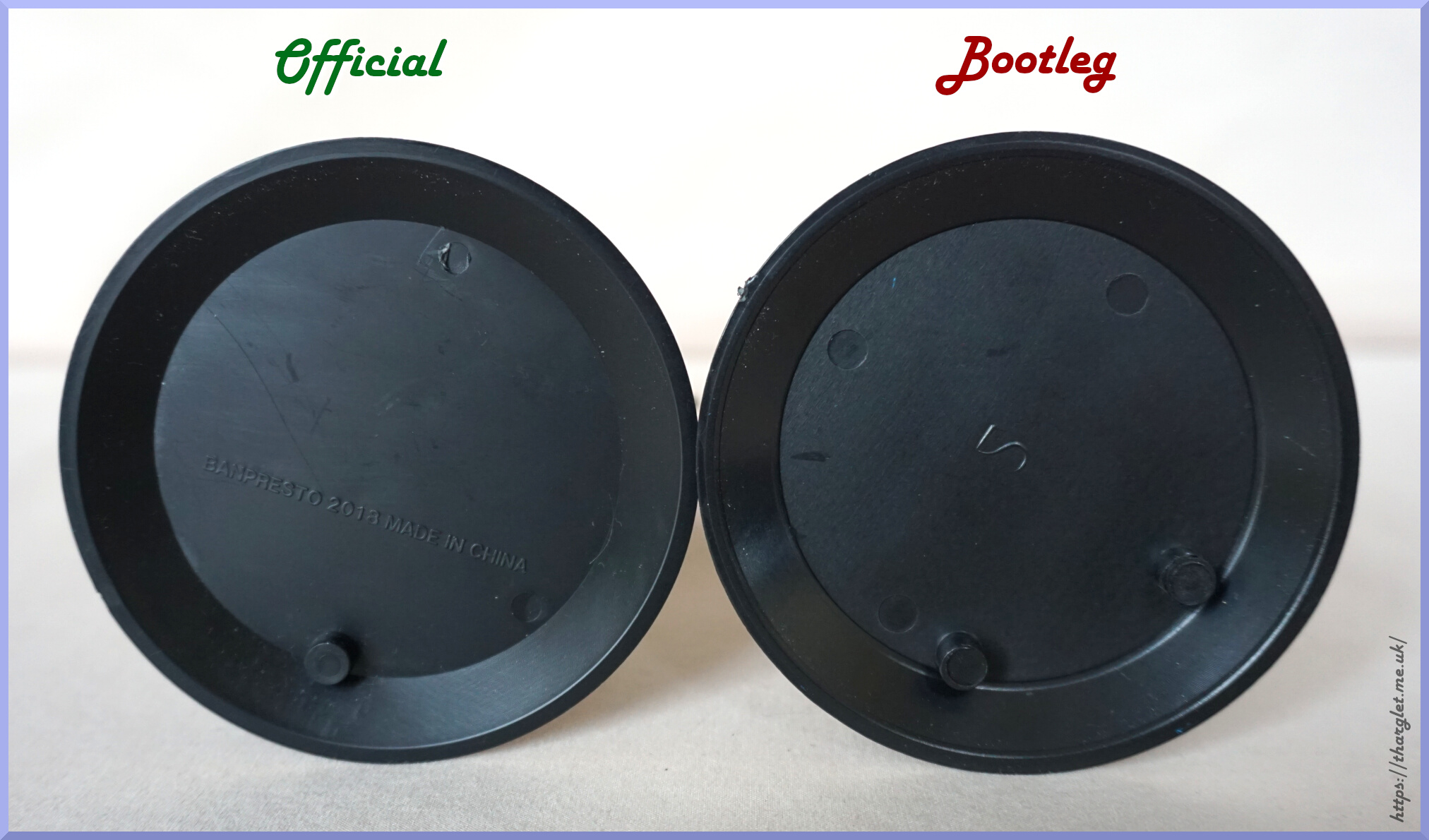 The official has a copyright mark, but interestingly only for Banpresto and not DC on this one.
Here you can clearly see the one peg hole on the official and the two on the bootleg. The bootleg also has a number “2” marking. I know Bandai has used numeral markings like this on trading figures to ensure parts stay grouped properly (all parts of a trading figure may have small numbers on them to denote what they belong to). This makes me wonder if this is a bootleg of an older Q Posket base, but these two were my first Q Poskets so I don’t have any of the older ones to compare.

These two bases would be hard to mix up. No Q Posket? Not a Q Posket. 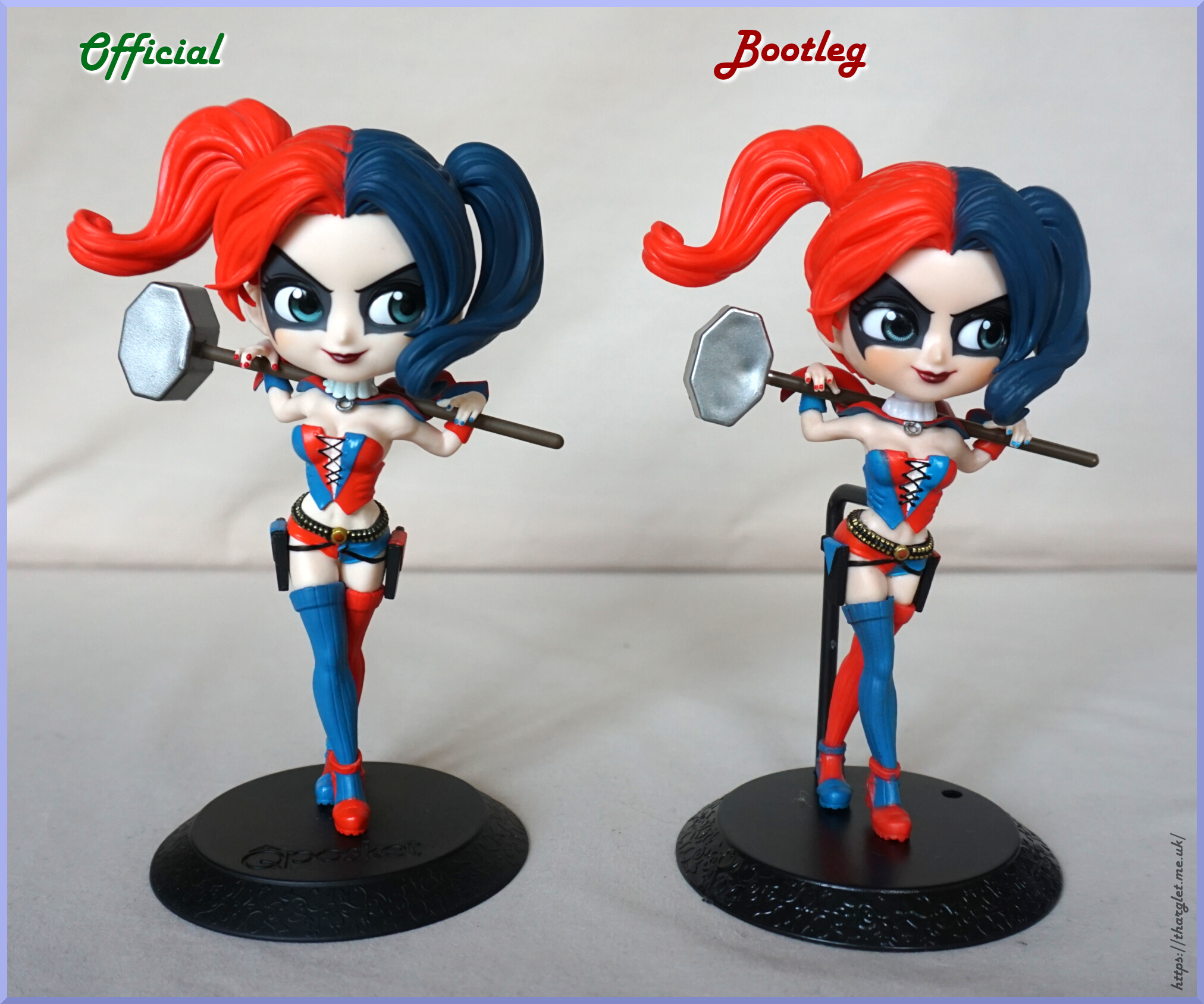 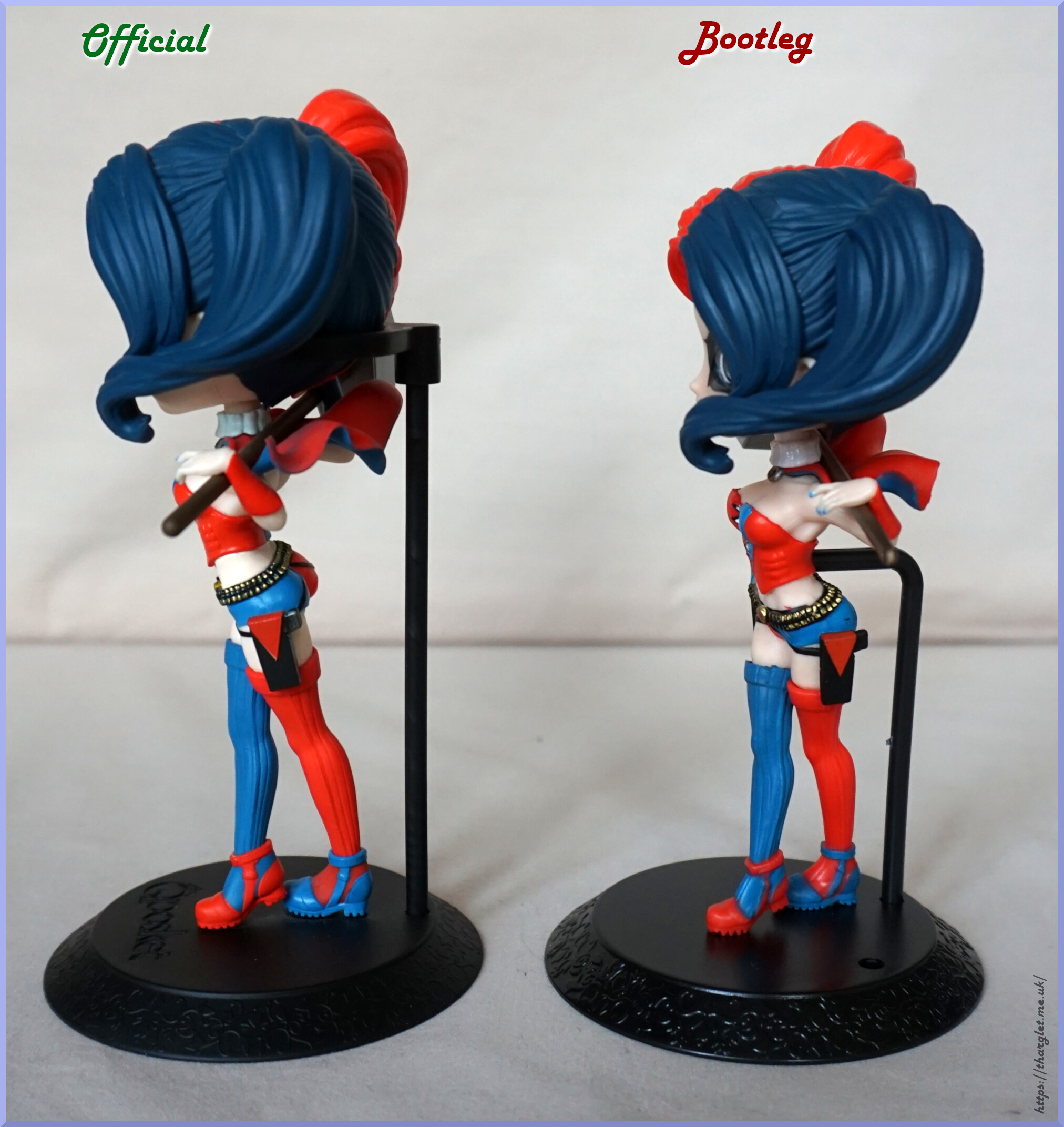 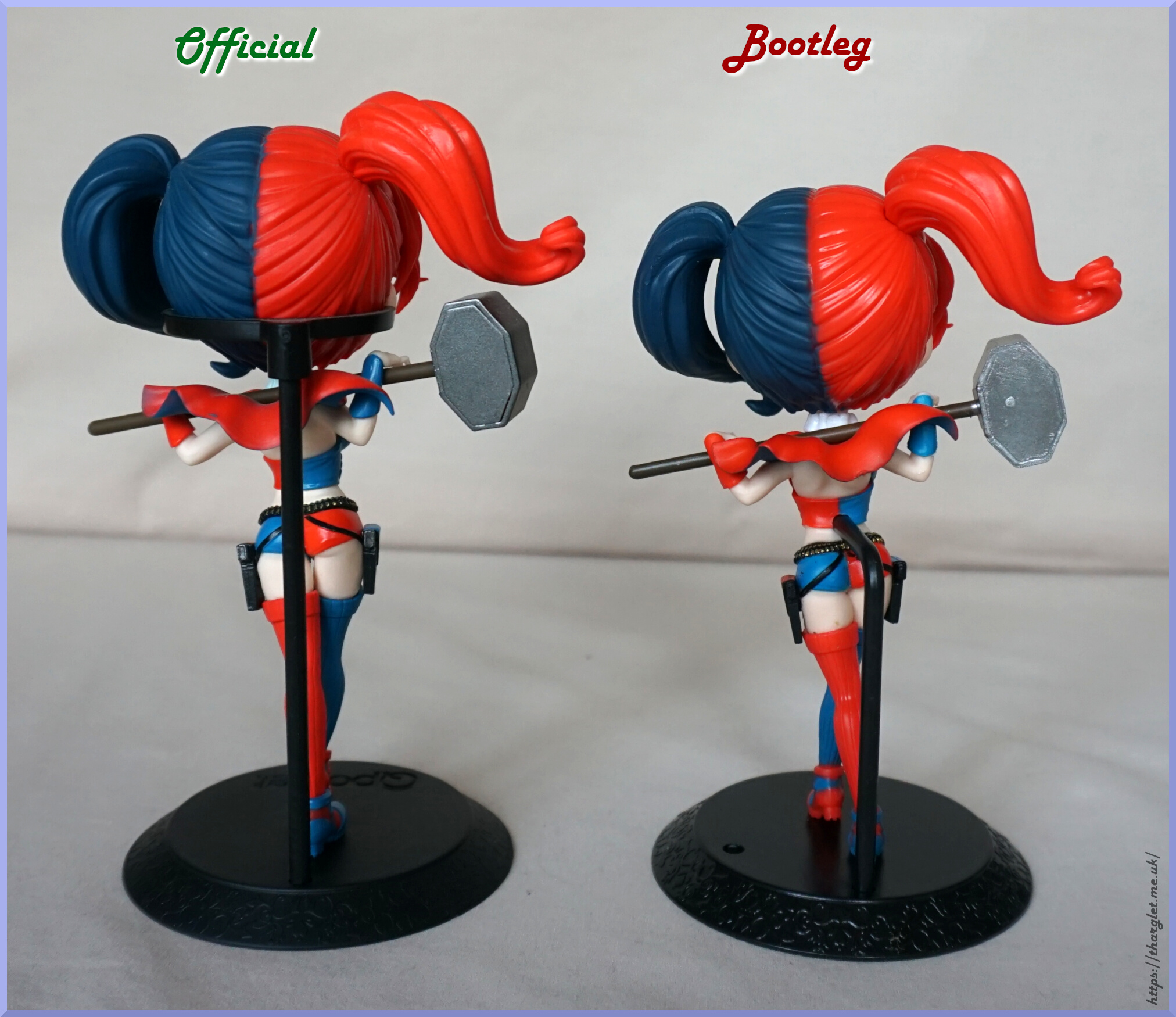 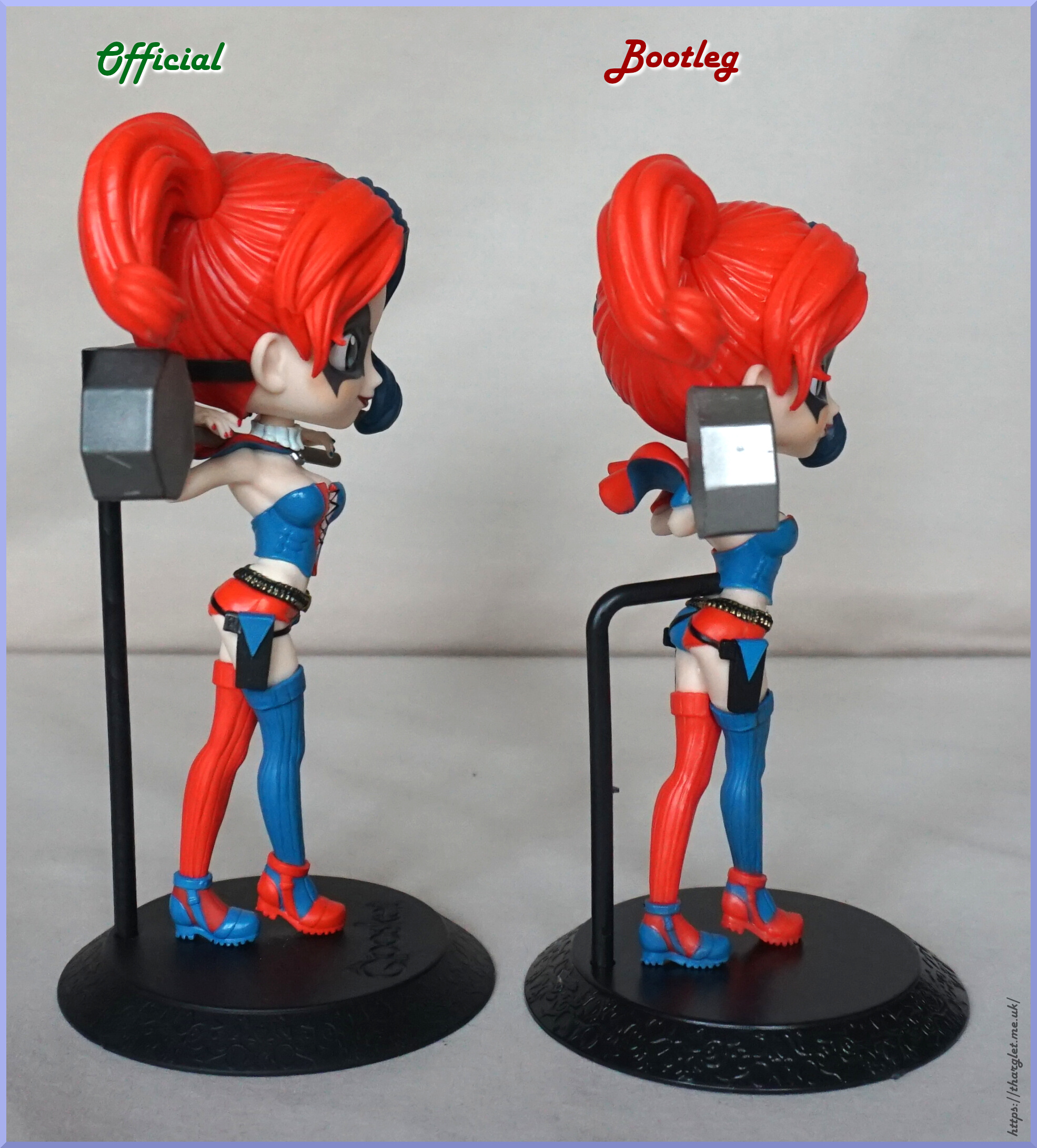 First thing to note – no, your eyes don’t deceive you – the bootleg has indeed been scaled down. This is why the hammer is smaller than the official – so it would fit this scaled down version of Harley. After the Catwoman Q Posket, it was a surprise to find this one was scaled down, especially for the tiny bit more it cost.
Also looks like the bootleggers only had some version of the figure to work off of – for the figure’s support they’ve gone for an inverted-L shaped post that pegs into the back of the figure, whilst Banpresto has gone for supporting her by the head. For me, the different support options have pros and cons – the hair stand type means you don’t have a hole in the figure, but the figure can be more unstable (though this is mostly alleviated by the foot pegs). The L-shaped stands tend to be better for stability and you can see more of the figure from the back, but you do have a hole in the figure to make the stand work.

Before I could photograph the figures I had to repair the bootleg: 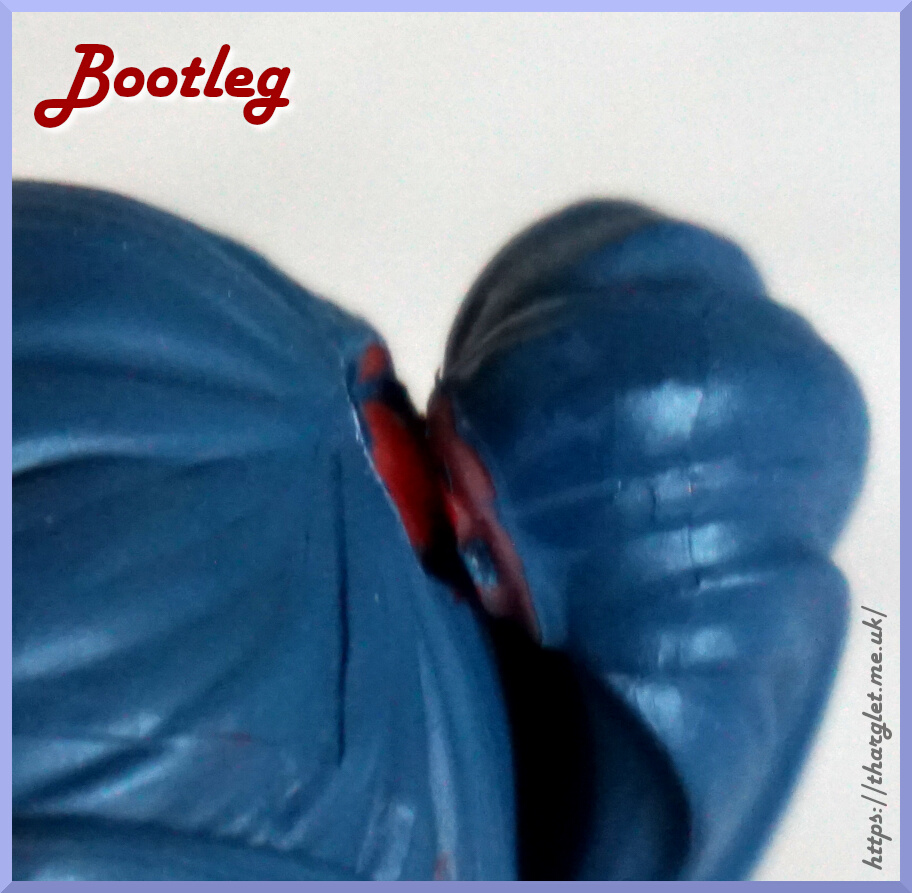 She wasn’t packaged very well from the seller – not uncommon for figures from China – so her hair snapped in transit. A tiny bit of superglue and time to dry, and she’s ready to go. 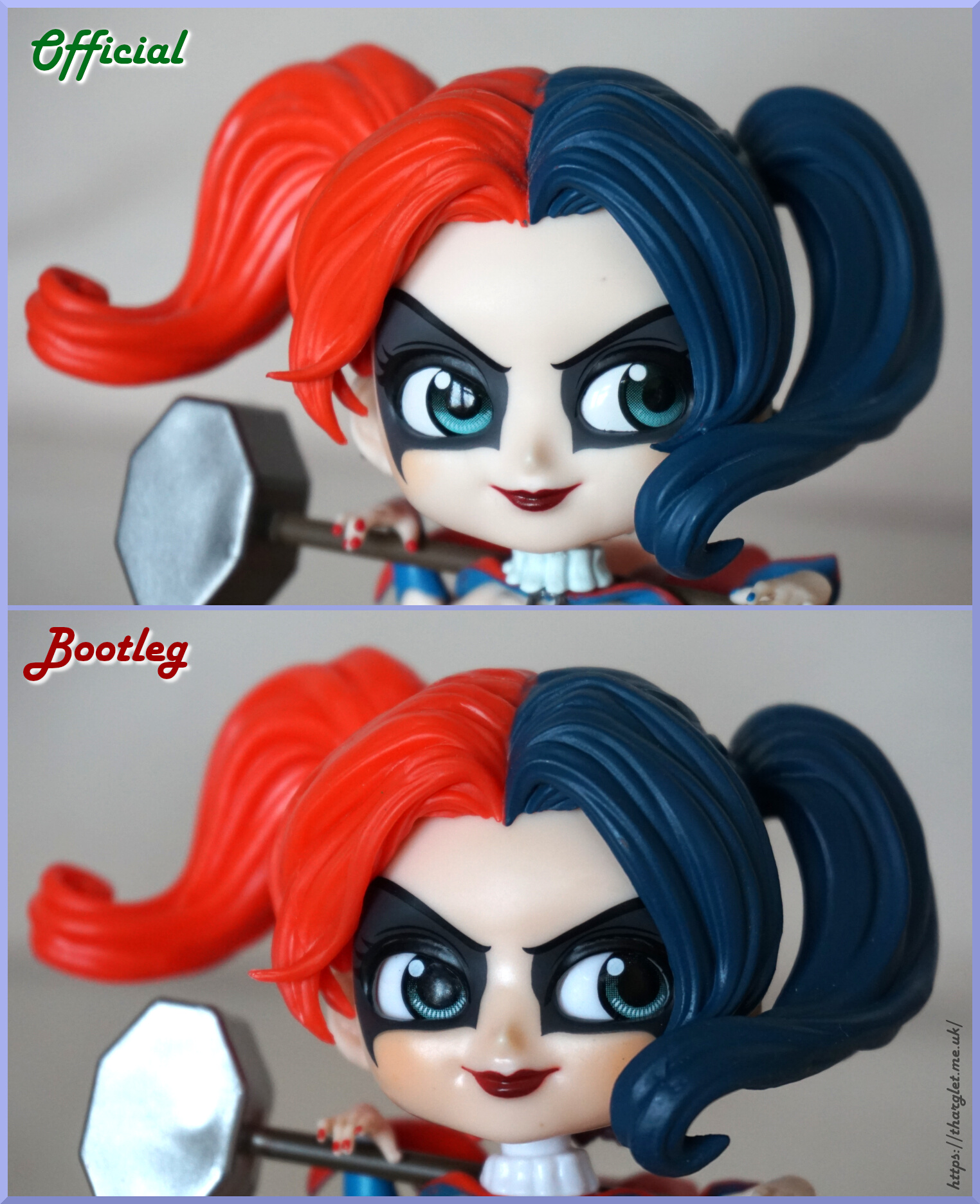 Bootleg Harley’s been a bit heavy on the rouge, and has quite orange cheeks. She also has the appearance of being sweaty, thanks to the shiny plastic. The bootleg has fuller lips – I think the thinner lips suit her more, but they aren’t bad in of themselves.
The colours in the official’s eyes make the highlights more subtle than the highly contrasting lines in the bootleg’s iris. We’ve also got some actual shine on the official’s eyes that the bootleg lacks.
Most of the moulding is pretty much identical on the bootleg, but some has been lost on the strands of blue hair from her ponytail.
Overall, the paint on the bootleg’s face has actually been applied well, though giving her cheeks less highlight would improve it. If you’re familiar with these figures, the lack of shiny eyes would give away pretty quickly you’re looking at a bootleg.

Back of her head: 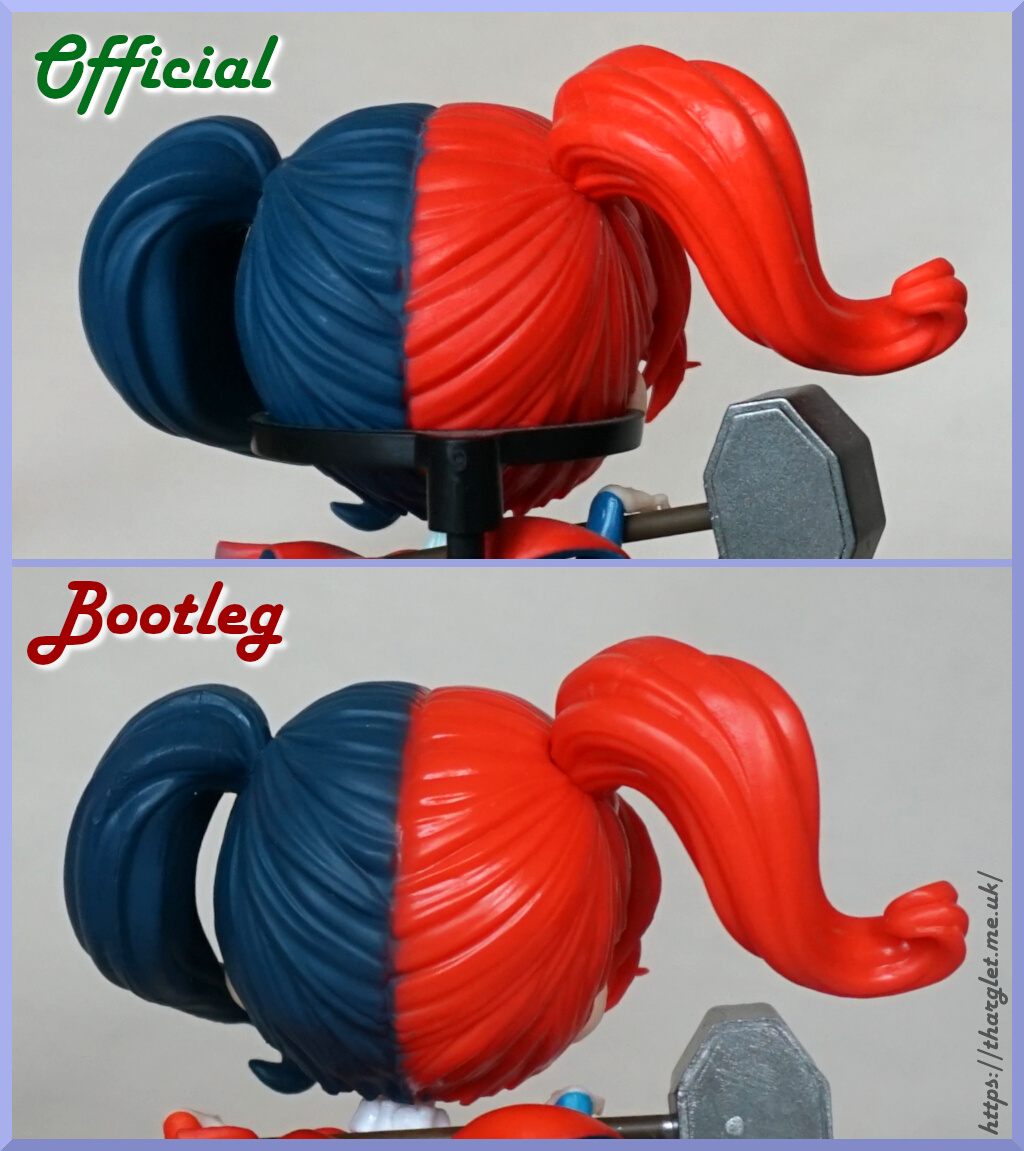 Again, the bootleg has a shinier finish back here. Neither figure has a perfect hairline back here, and both leak some of the hair colour over to the other half. The official has the blue extending slightly into the red, and the bootleg is mostly the opposite.

Didn’t quite get the bootleg in focus here, sorry!
Honestly, I think both collars here could use some work, though at least for the official her neck hasn’t turned into full collar. The official I find a bit rough-looking and lumpy. The bootleg avoids that, but the finish makes it a bit like she’s wearing a jelly mould or something.
We can also see where the bootleggers haven’t tidied up the seam down here. Also the neck has a pointless recess for some reason, not sure what that’s about. 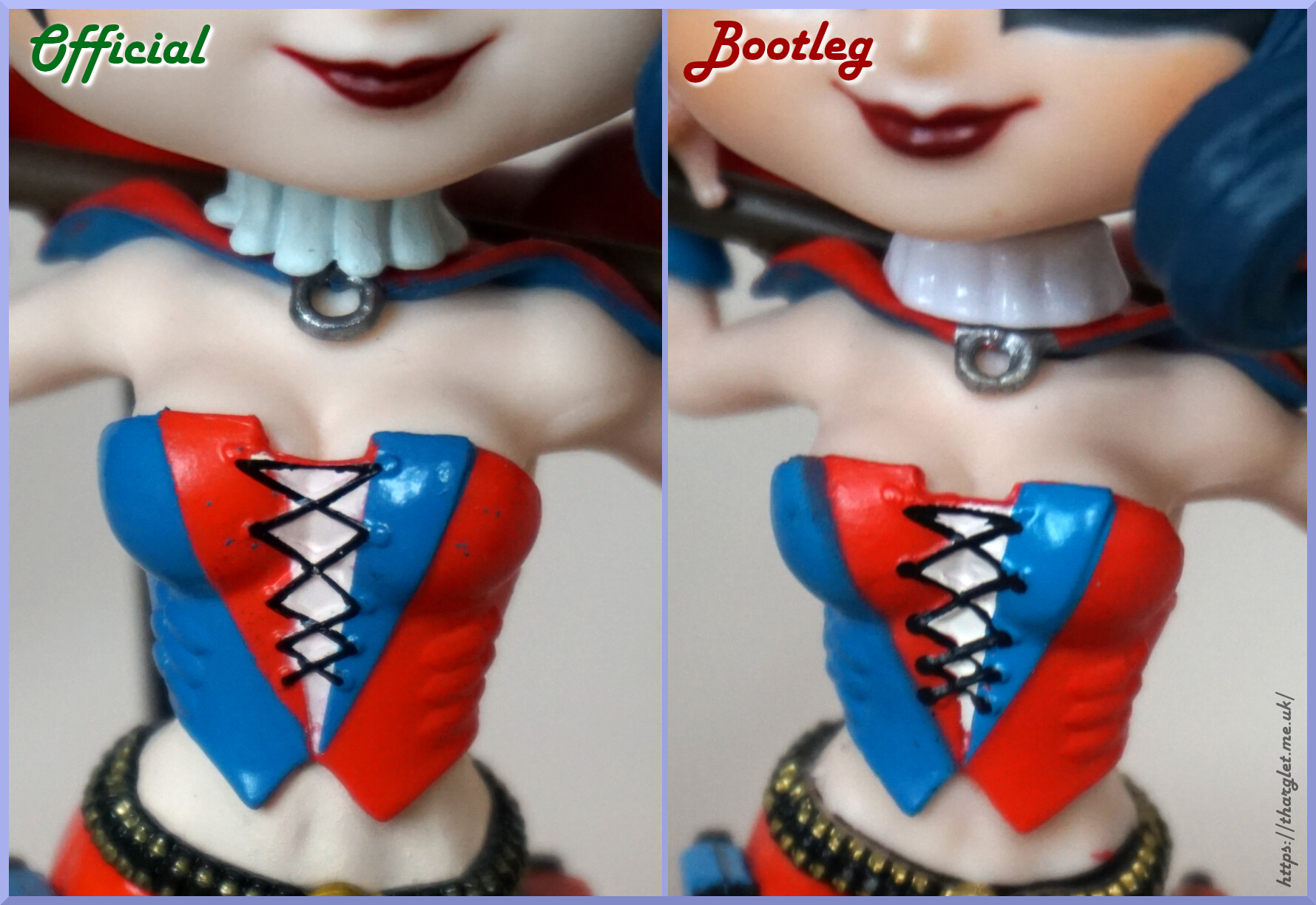 OK, let’s start with the good – I like the ring on the official’s collar. The bootleg’s isn’t as nice but does the job.
Now onto the bodice – my official has a bunch of stray blue paint, and honestly, the painting feels rushed here. From a distance it doesn’t look too bad, but that stray red paint above the laces should really not be there. The difference in the body colour and the “skin” on the bodice looks OK at a distance, but if you’re holding the figure it does take on an odd appearance as it isn’t an exact match.
So let’s take a bit that looks a bit “eh”, and bootleg it… The black paint is a bit more of a mess, and that stupid red line is still there. The blue and red badly overlap on her right hand side, and the blue isn’t staying within the lines on her left. They’ve also used a white instead of an off-white making the bodice even more strange when looked at closely. 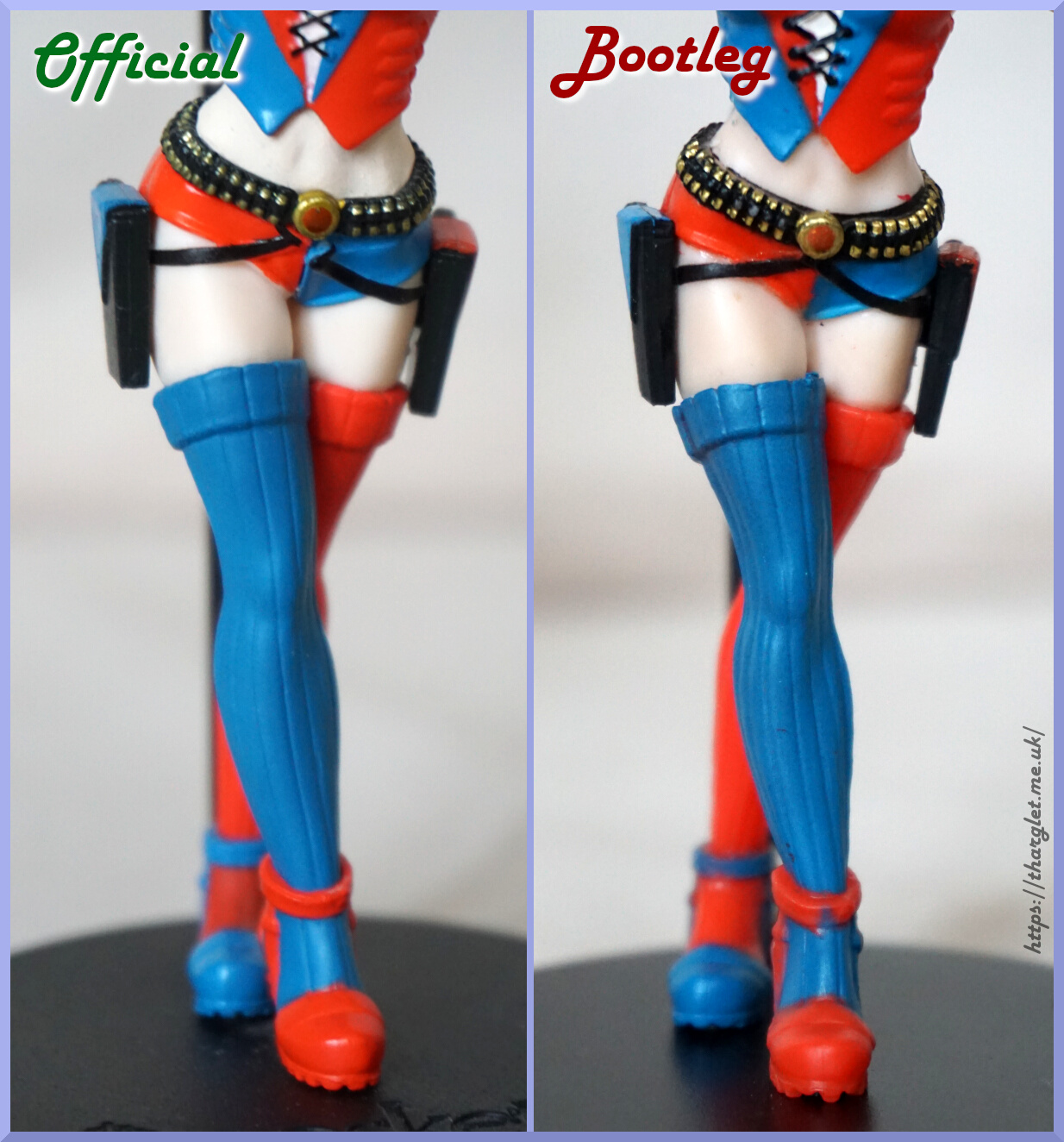 The official wins hands down here – the paint is much neater and thicker on the official, keeping the contrast between the colours.

Top of the cape: 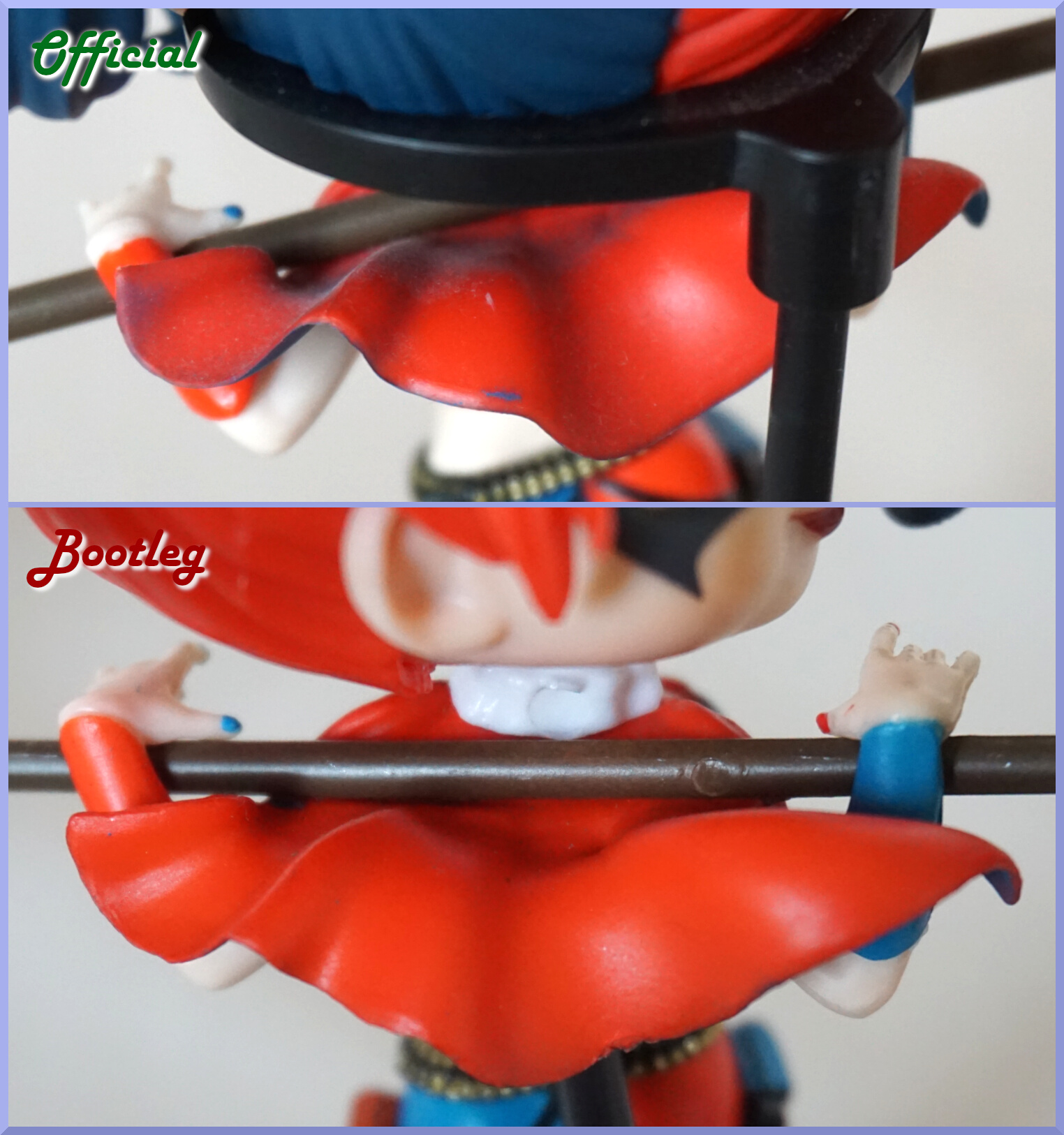 My official one has a bit of stray blue paint – not so great. The shade of red is better on the official imo, but there really isn’t a lot in it. The bootleg’s cape isn’t free of flaws either – and there’s a small “nibble” on the edge of the cape.

Underside of the cape: 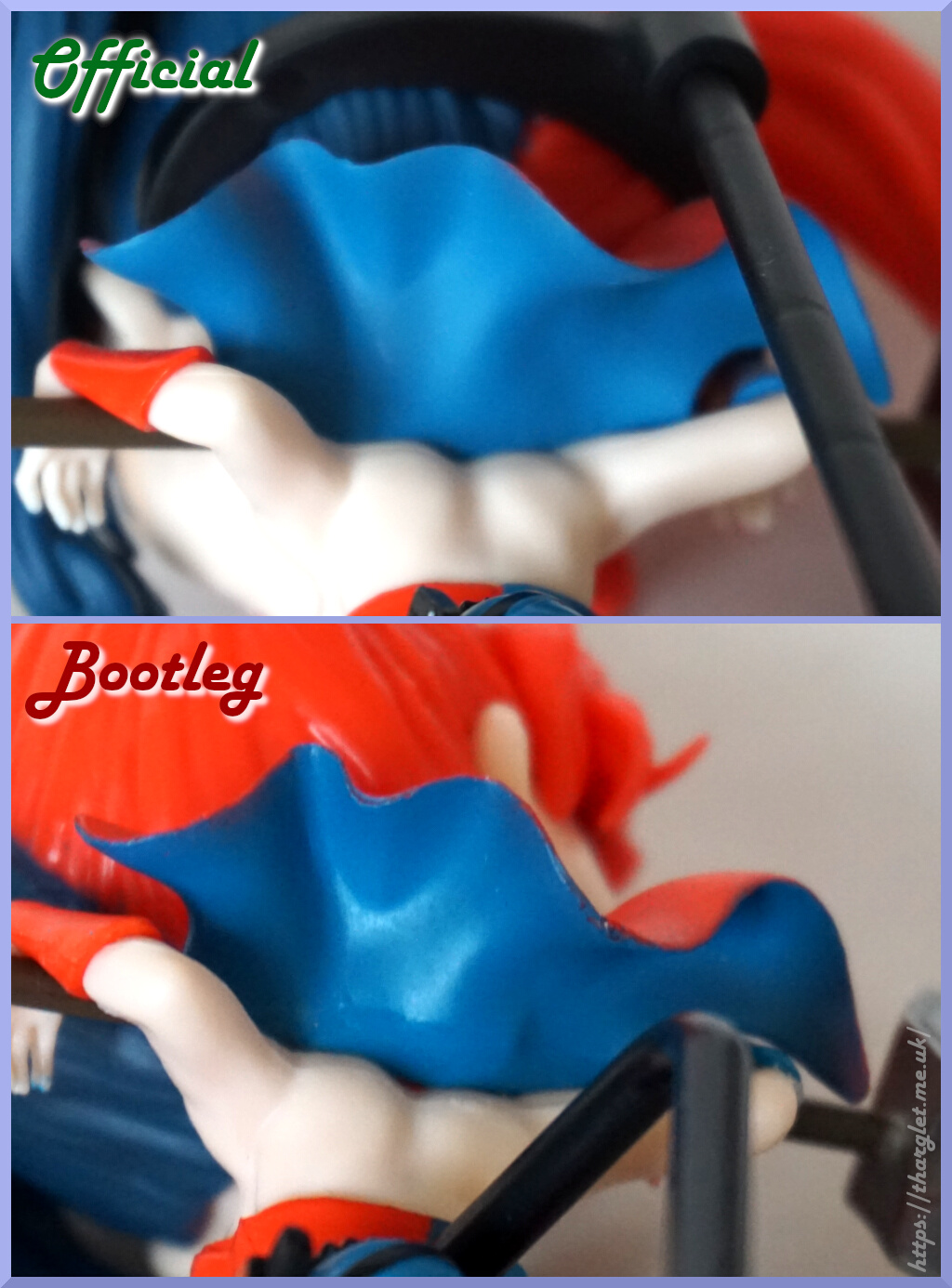 Yep, both blue down here. We can see the edge of the bootleg cape is a bit rough and the bottom is a bit shinier. Again, nothing major.

Looking at just the figures, they would be a bit hard to tell apart without them next to each other. However, if you’re familiar with the official figure, then the lack of shiny eyes would be a clue, along with the slightly shiny face.
With the base, it acts as a dead giveaway – the bootleg lacks the “Q Posket” branding, and has an extra hole for no apparent reason. Also the figure has a different stand type, so that would be an easy difference to pick up on.
Could this bootleg be recommended to someone who buys bootlegs? I’d say yes, as she’d still look cute on a shelf. She currently goes for ¥1,200 on Mandarake, which isn’t super-expensive, but the bootleg is stupidly cheap. Does come with a free plastic-y scent though which the official doesn’t have.
If you’re wondering why there was no headswap in this blog – that’s because I can’t. The head pegs don’t work either way around, so I’m afraid there’s no silly headswap pics. Would’ve looked funny with the different scales, oh well.