This one I found an interesting choice on the case of the bootleggers – this figure is still being actively bootlegged, despite its aftermarket price usually being quite low. So what can we get for bootleg prices?

The Kotobukiya logo is conspicuously absent on the bottom left, along with the authenticity sticker. They have also removed the warning texts as well – not sure why bootleggers do this sometimes.
Interestingly the text that says “Party dress version” above Ayanami’s name is white on the official but black on the bootleg. Not sure why that happened as the box doesn’t appear to be a total recreation. The blue colour is slightly off, but not in a way that screams “bootleg”. 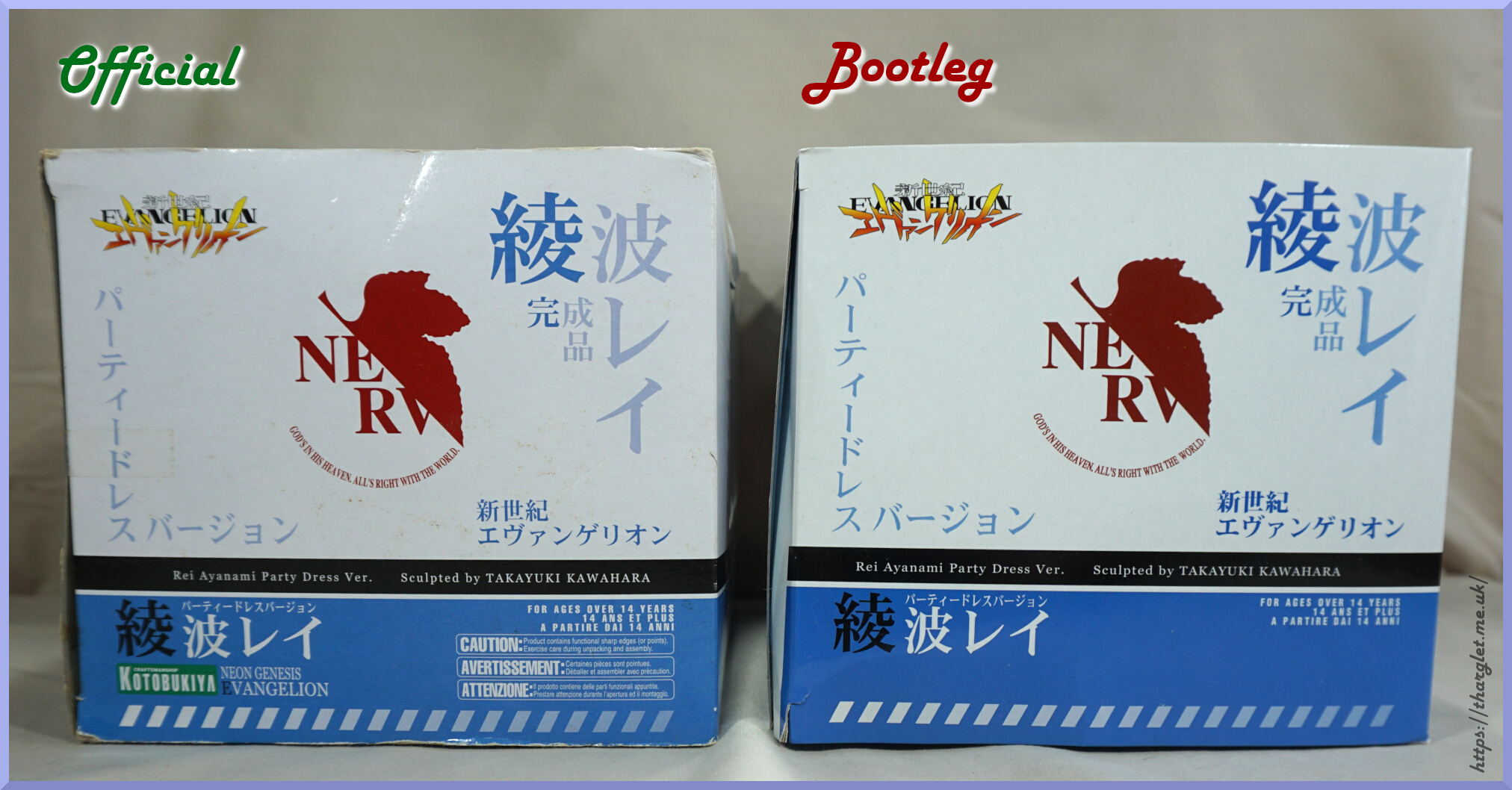 On this side, we can see they have removed the Kotobukiya logo, the “Neon Genesis Evangelion” text and the warning text from the bottom edge. Not sure why they object to people being warned to be careful with the product.
In the top left there is less contrast in the blues on the bootleg, but nothing that massively stands out. 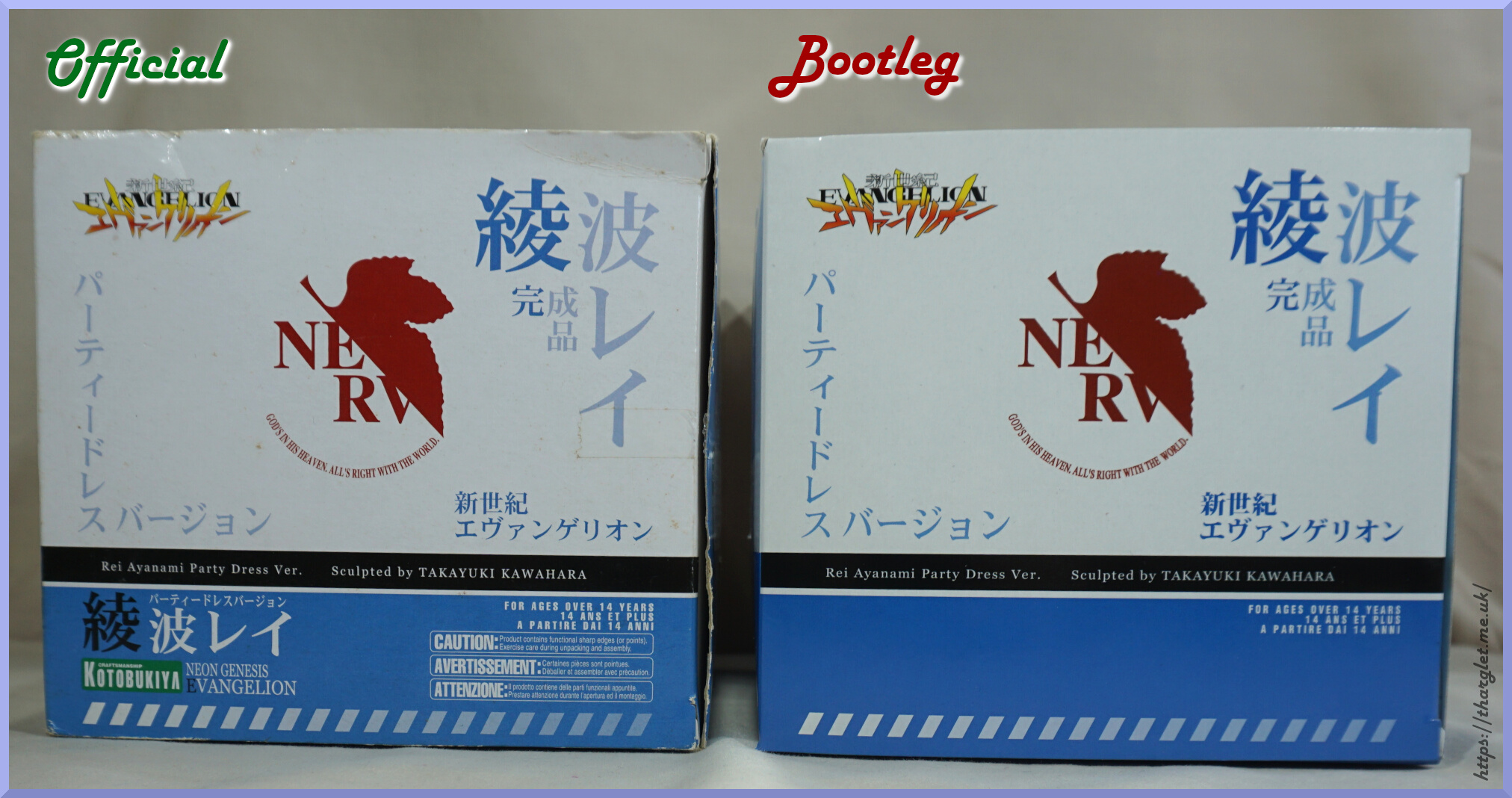 Here they seem to have gotten lazy with the editing and just removed everything in the bottom left, plus the warnings.

Here they’ve removed certain parts of text and rearranged what was left to vaguely fill the space. Anything that references Kotobukiya has been removed, but we do seem to have the corrected text slapped on there, instead of whatever’s underneath my box’s correction sticker.
This box also has had its barcode replaced with one for a sticker sheet. Well, I suppose it’s a sticker sheet by Kotobukiya! One of the bootleg boxes which shows it can pay to check the barcode.

Slight difference in the shade of blue. Not much to report here.

Now to open the box: 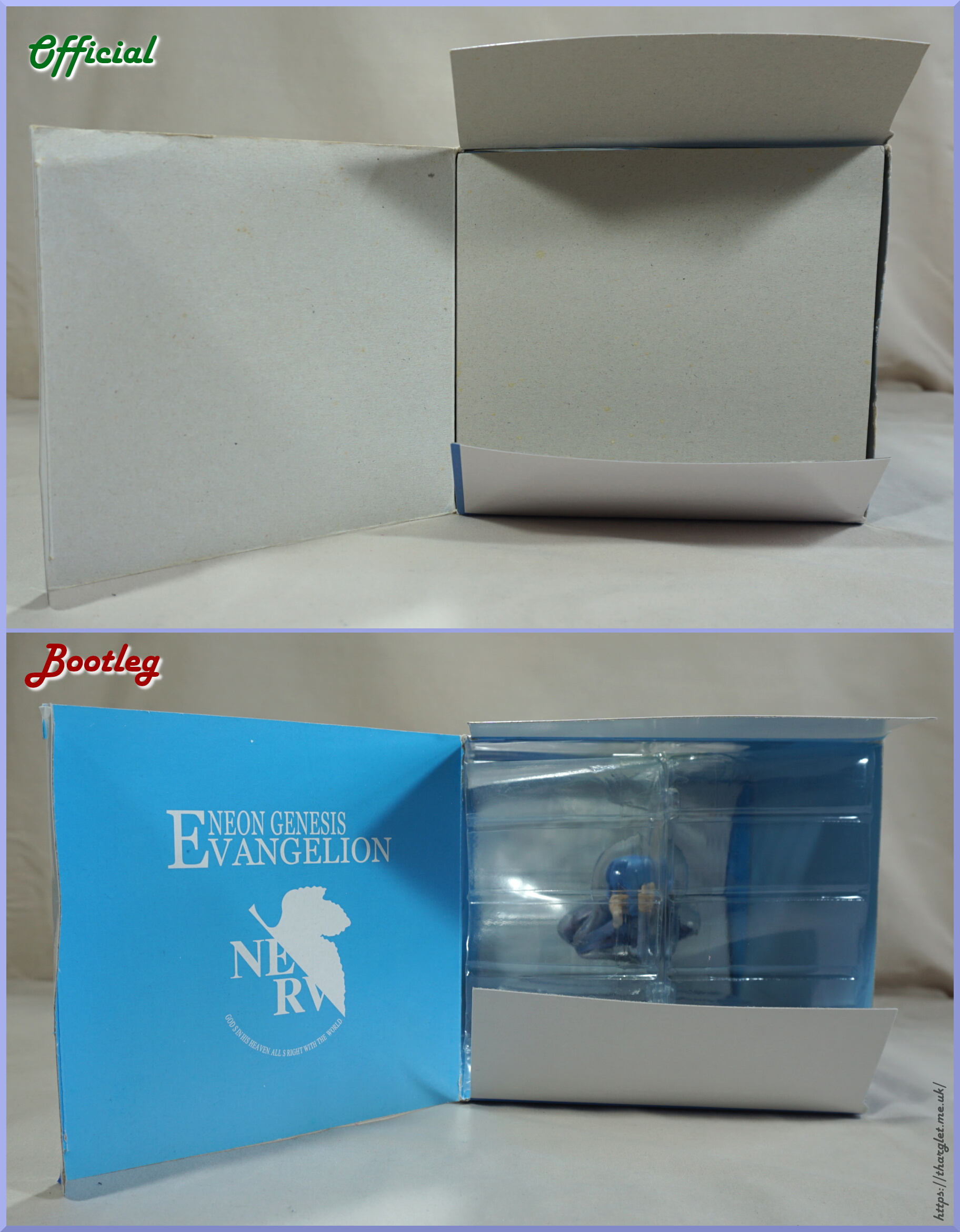 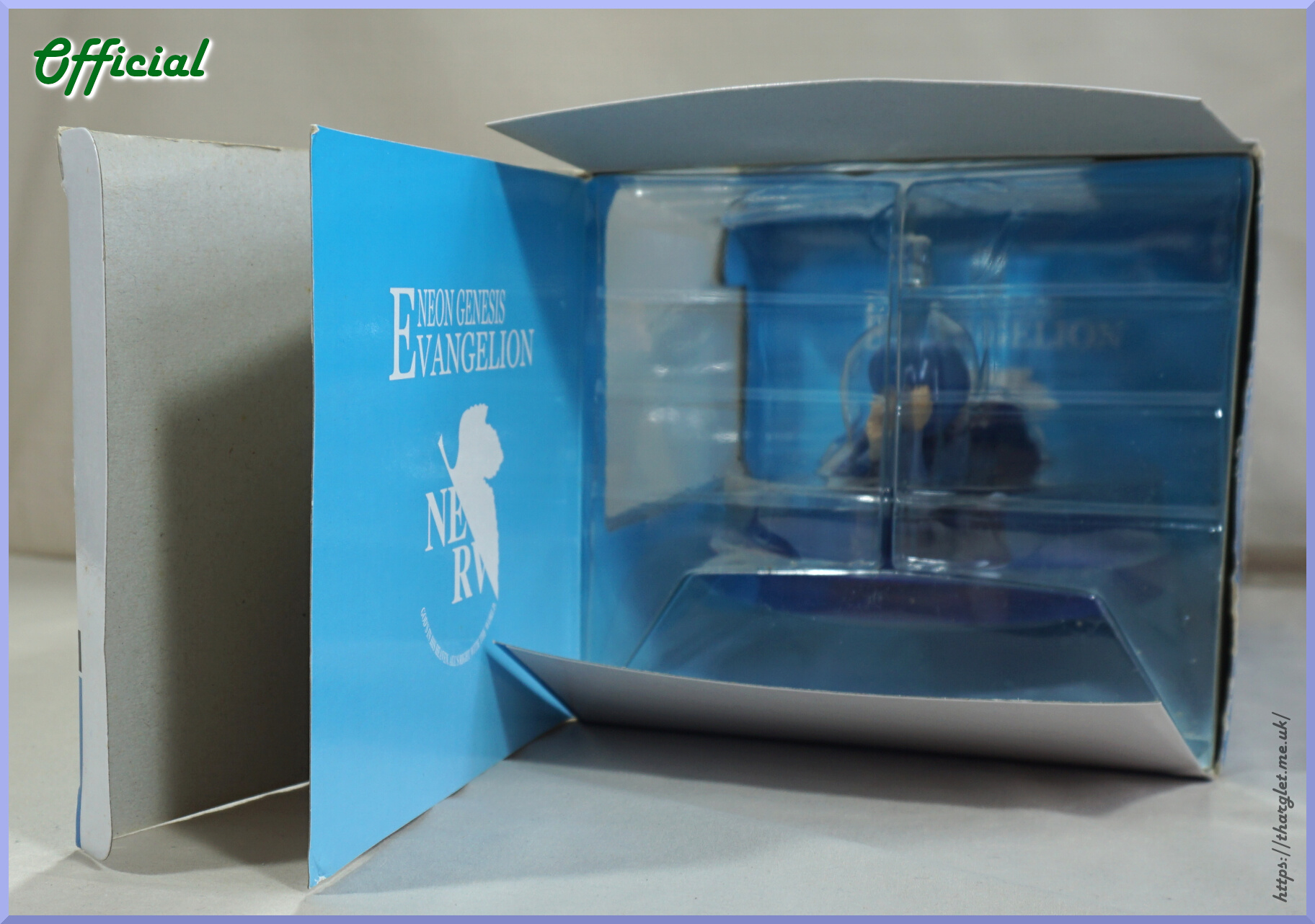 This blue part slides out and isn’t attached to the box.

The official blister is a bit different from your average blister and folds open, as well as having a separate support piece to place Rei upon when packed. The bootleggers have gone for a very basic clamshell design. 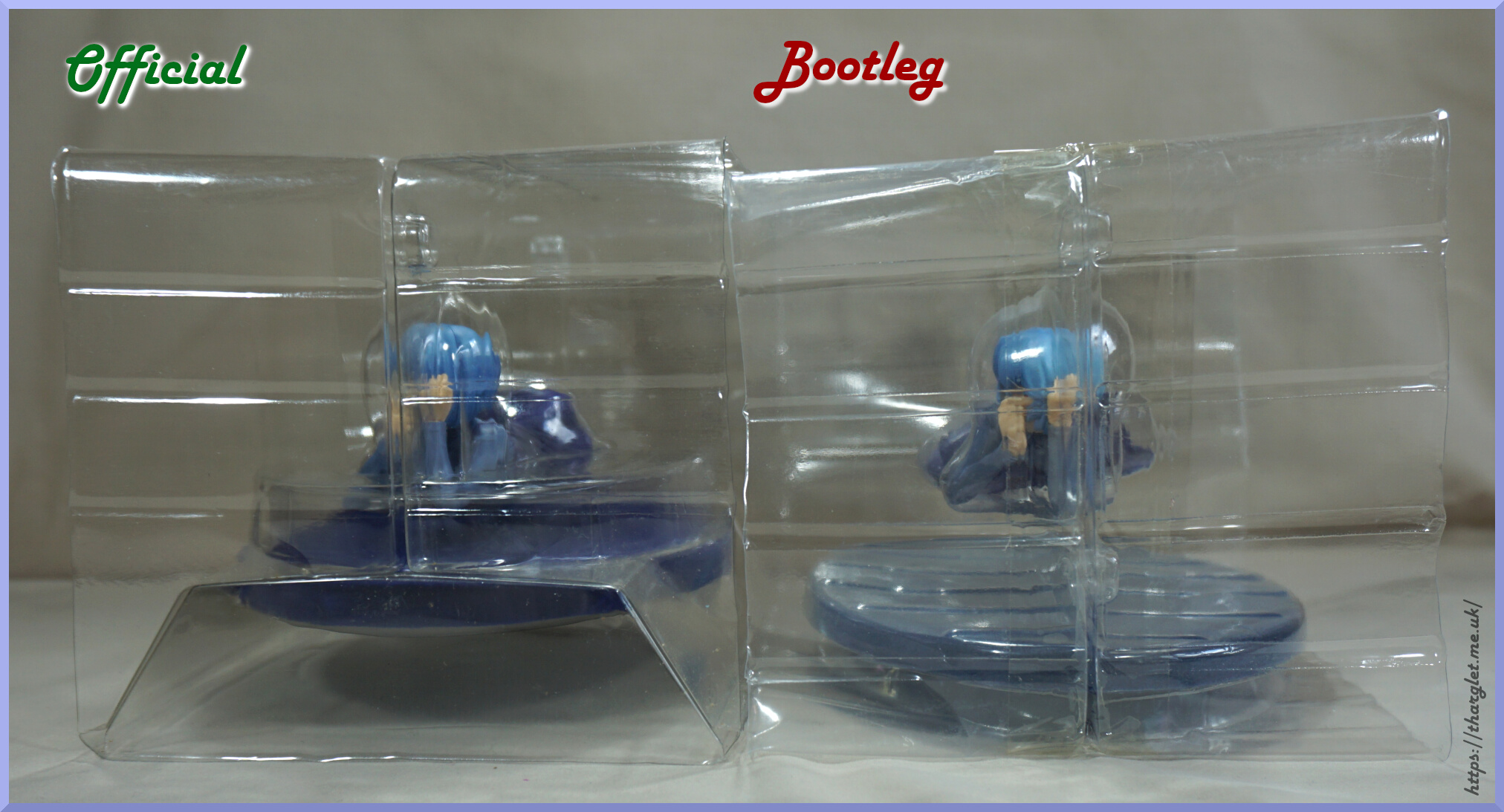 Note the trapeze shape at the bottom of the official, whilst the bootleg is a “normal” design.

Here is the official blister opened up: 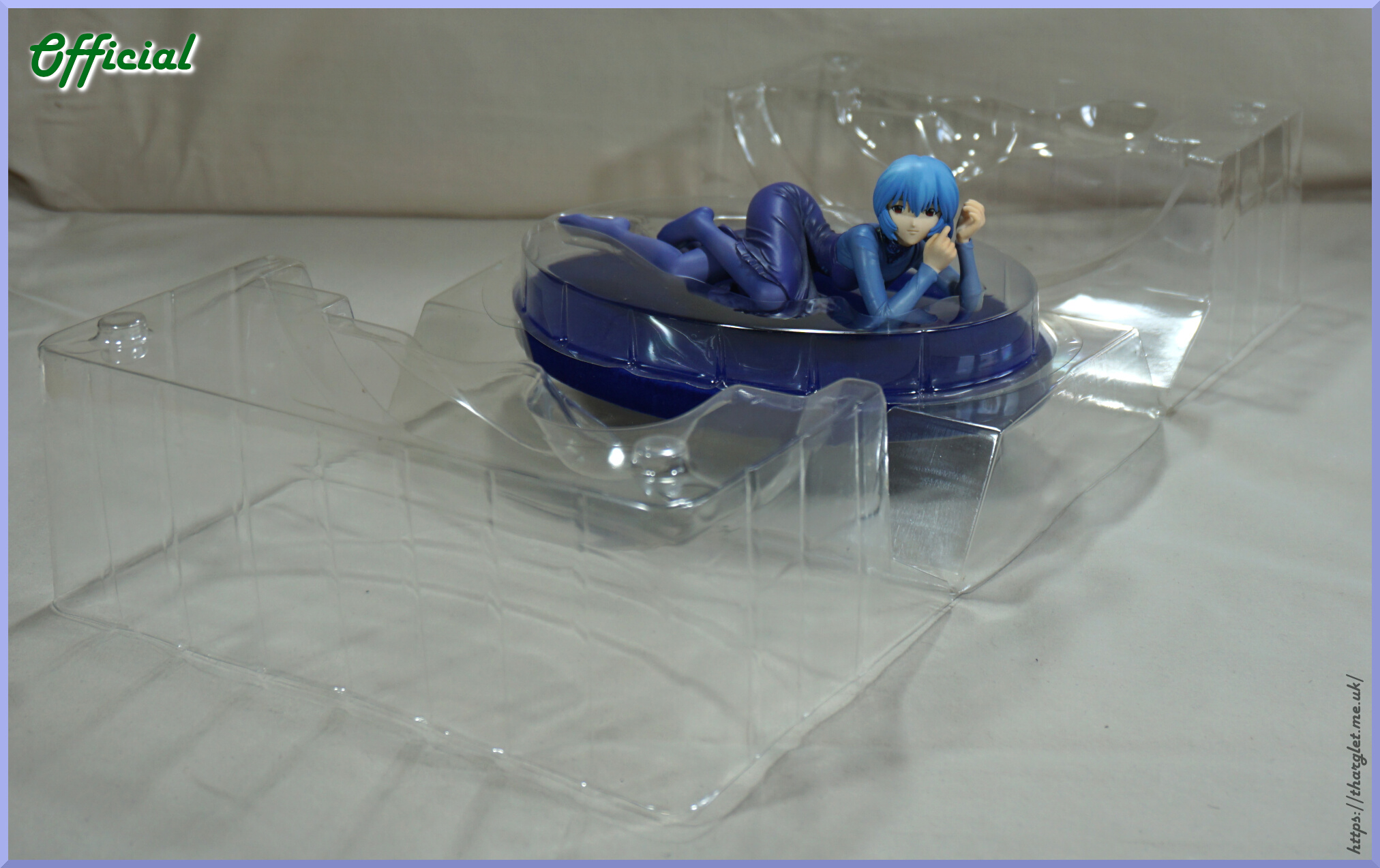 A small thing, but a pretty cool feature.

My official was purchased secondhand and opened and there’s a couple of scuffs on the base, though the scuffs don’t really show once Rei is on it. Let’s see if the bootleg can make a worthy replacement:

I’m not feeling it… The official’s base is a much nicer velvety material, and the bootleg looks scuffed on the edges from the outset.

Let’s see just how thin the bootleg is: 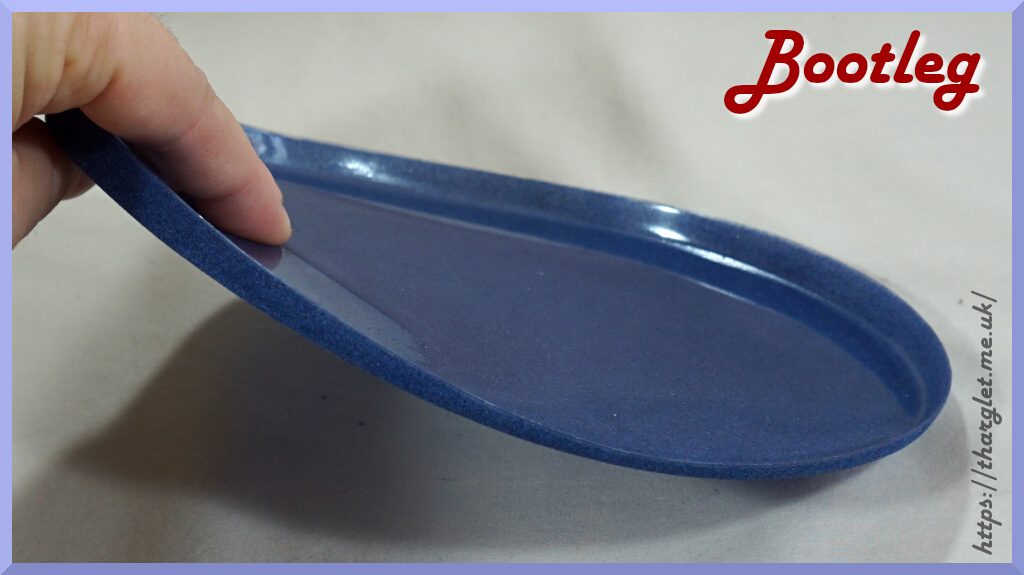 Yeah, this thing can be bent with little force. It really is cheap and naff.

Let’s shed some light on the matter:

Official is entirely opaque, as one would expect. The bootleg however… doesn’t do much to obscure the photography light. The fluff stuck onto it is very sparse and the base plastic is ridiculously thin.

Overall, this base is a poor replacement for the official. It looks naff, feels naff and is well… naff. I’ll be sticking with my official one, thanks. I expect if I did use the bootleg base it would eventually bow in the middle thanks to the plastic used.

OK box, bad base, let’s see how the figure itself holds out.

Can definitely see some colour variation going on – most notably on her tights. The bootleg overall seems to have a more “potato-y” look where everything is slightly less distinct. We also have shiny face syndrome where the bootleg hasn’t been given a matte finish.

A couple of extra angles for the spin-around: 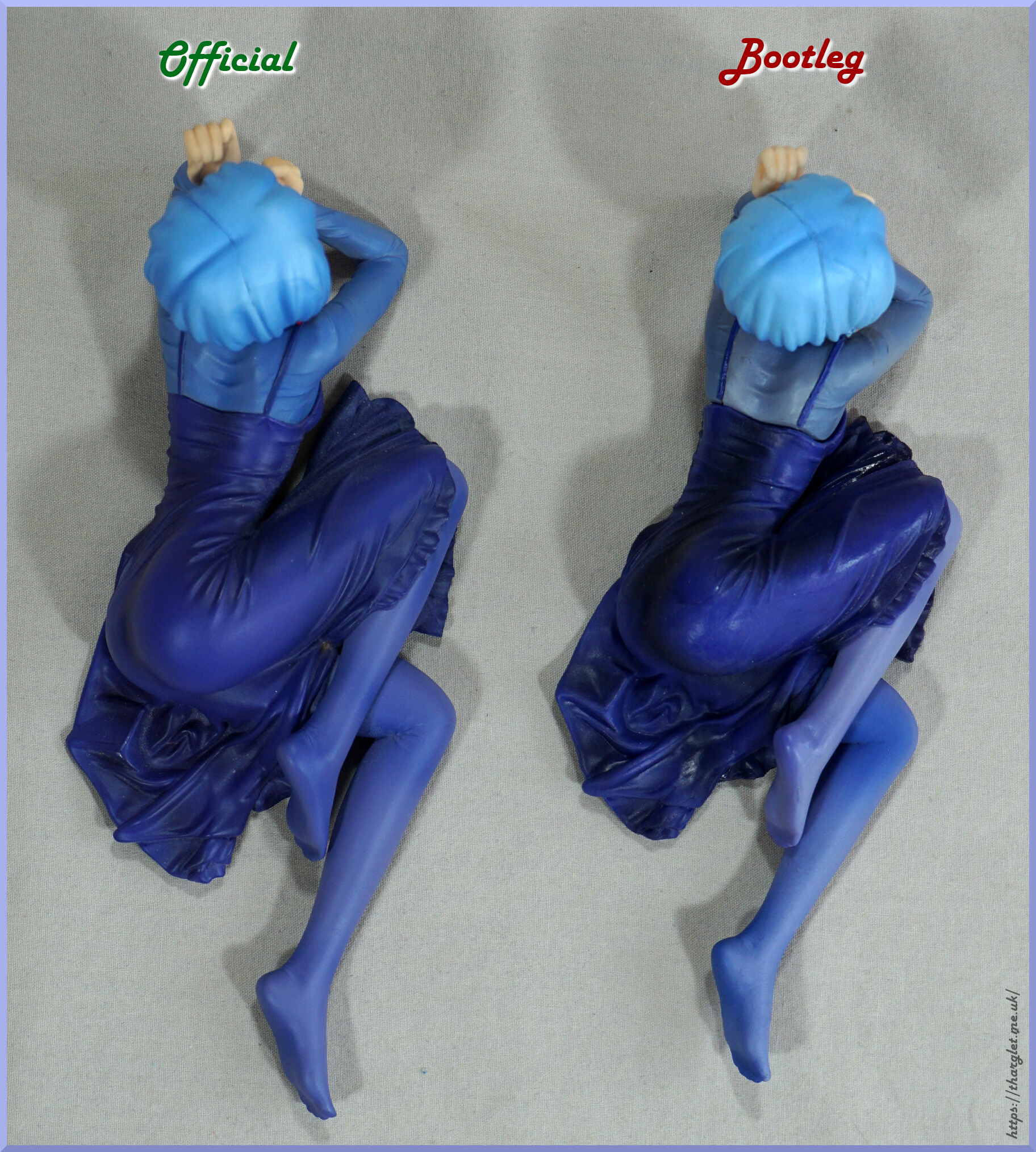 Yep, definitely some imperfections and shininess to look at closely on this bootleg. 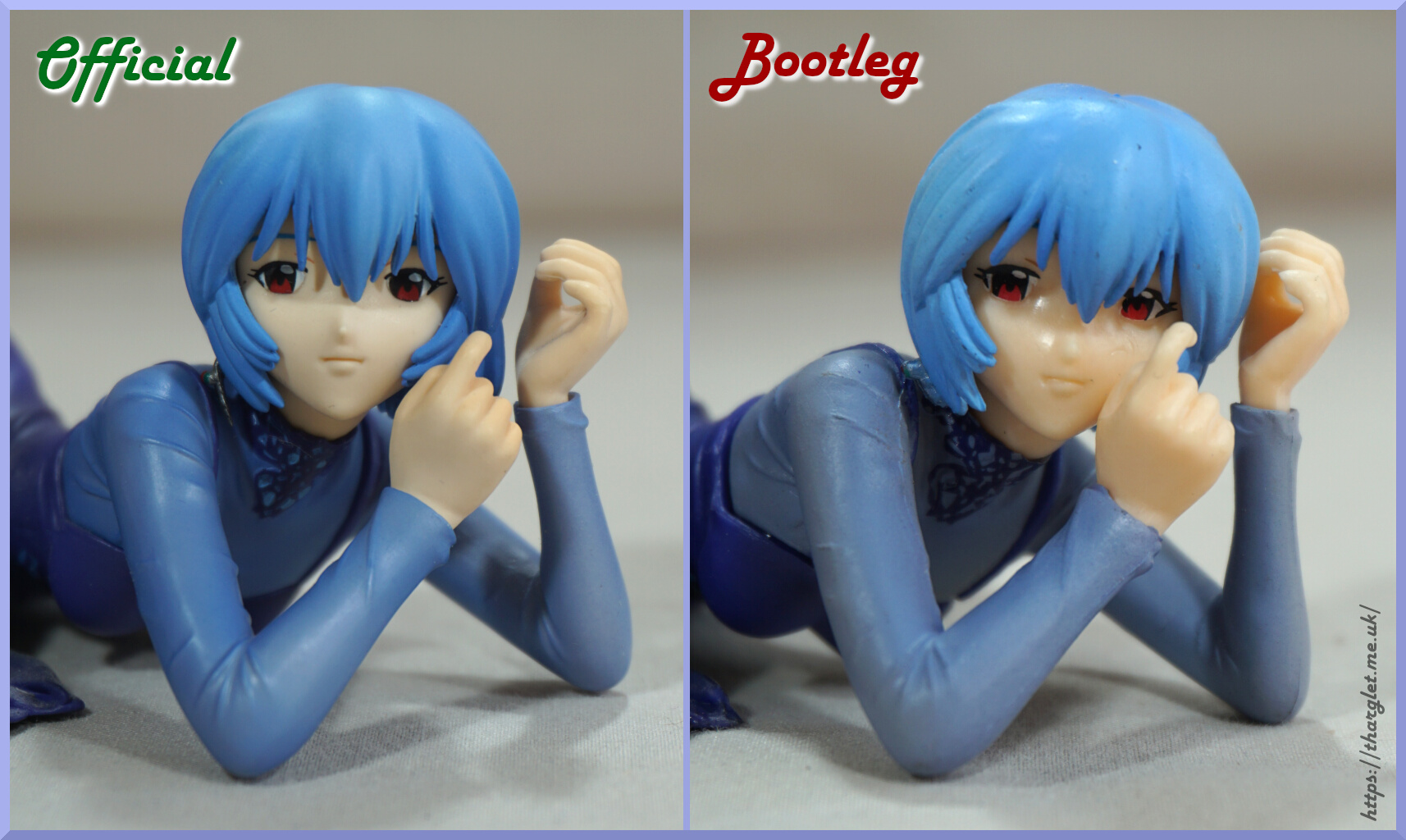 Hmmm… that bootleg face. First thing that stands out is the skin – the official is matte finished whilst we have a shiny finish for the bootleg. And then we have the facial features – the bootleg’s eyes are too bright of a red – I’d personally say Rei’s eyes are more like the official’s. With the bootleg’s lack of finish and the lack of a paint line between her lips her face also looks rather blobby.
The bootleg’s hair is lighter and dirtier but the ends aren’t as blobby as other bootlegs I’ve looked at, but still not a crisp mould.
Moving to her sleeves, the top of the bootleg’s right sleeve is rough and uneven. Personally, I’m not a fan of the shade of blue of the bootleg’s shirt either.
Looking at the dress near her neck, the pattern has been painted neatly on the official and we have three shades of blue. The bootleg’s isn’t too bad, but doesn’t match the mould lines nor have the lighter blue infills.

Turning her around slightly: 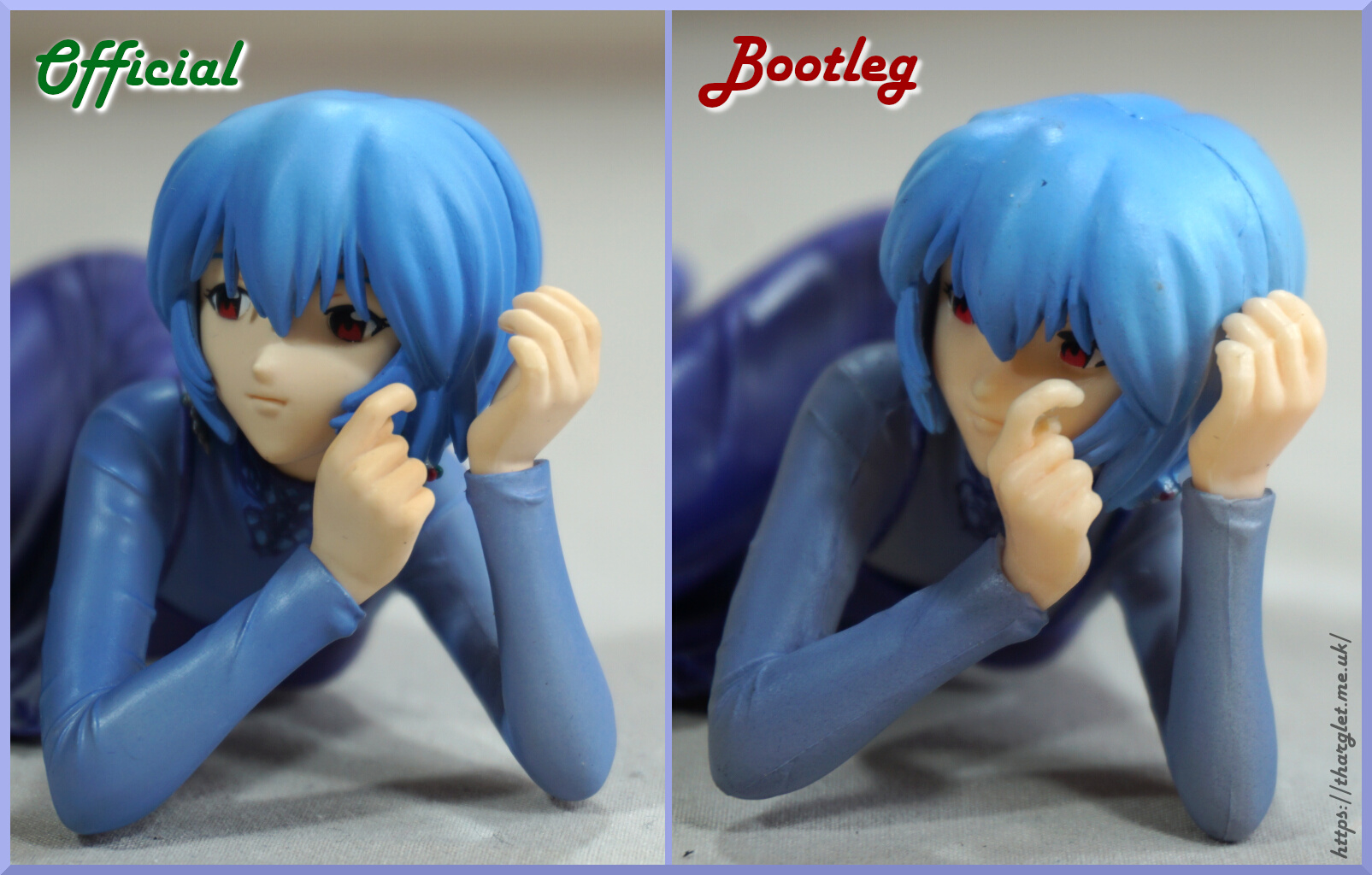 Here we can see that the bootleg’s arm seams haven’t been smoothed out well. 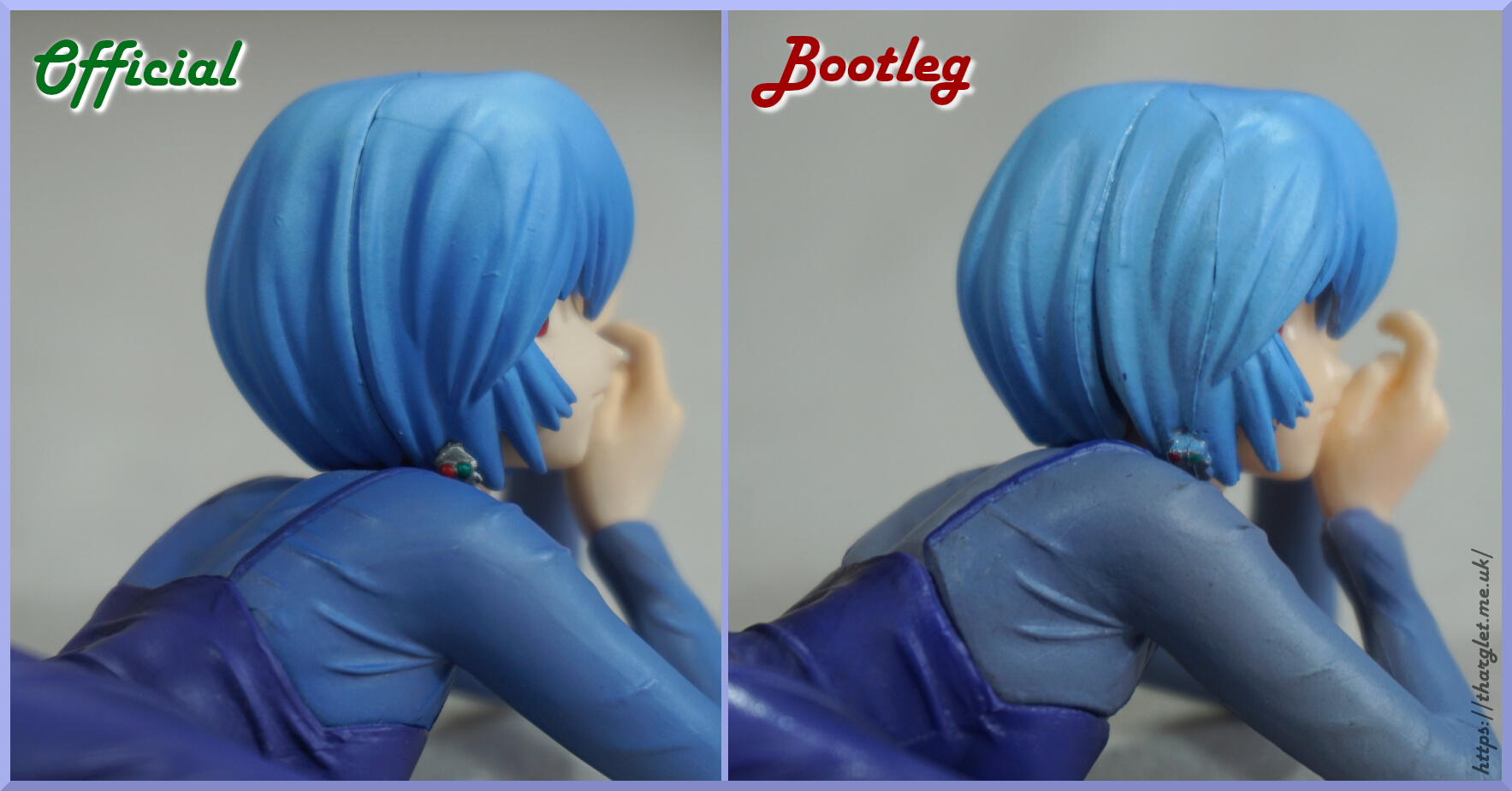 The earring itself on the bootleg has turned into a blue, blobby mess. On the official we can clearly see it is supposed to be an earring poking through her hair.
Looking at the hair itself, the joins have been much more smoothed out on the official, and the bootleg’s seam lines aren’t the same as the official’s.
Moving down to where her upper body meets her dress the bootleg wasn’t and can’t be assembled correctly – the joint has large gaps and the parts don’t share the same shape to join up properly.

This one is even more of a blob on the bootleg – looks like the bottom half of the earring didn’t get cast and they did they best they could with what was there. The official’s adds a cute touch to a fairly simple figure.
Hand mould isn’t great on the official, but slightly more blobtastic on the bootleg.

Top of the hair: 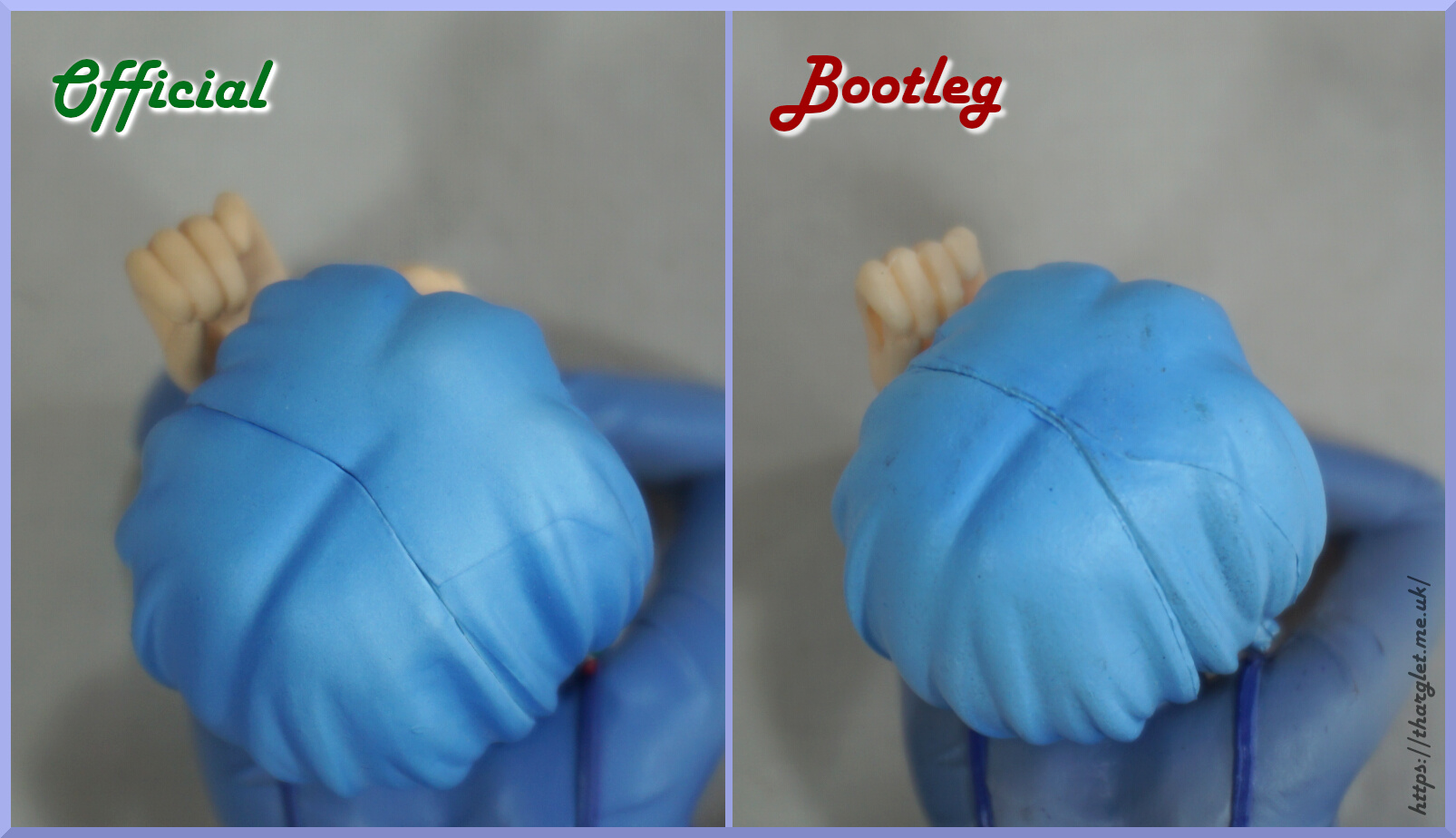 Official we can see some paint shading in the hair. The main seam is fairly visible, and the bootleg is not too dissimilar for this seam. We do get a lot of dirt on the bootleg however. Not quite shading…? 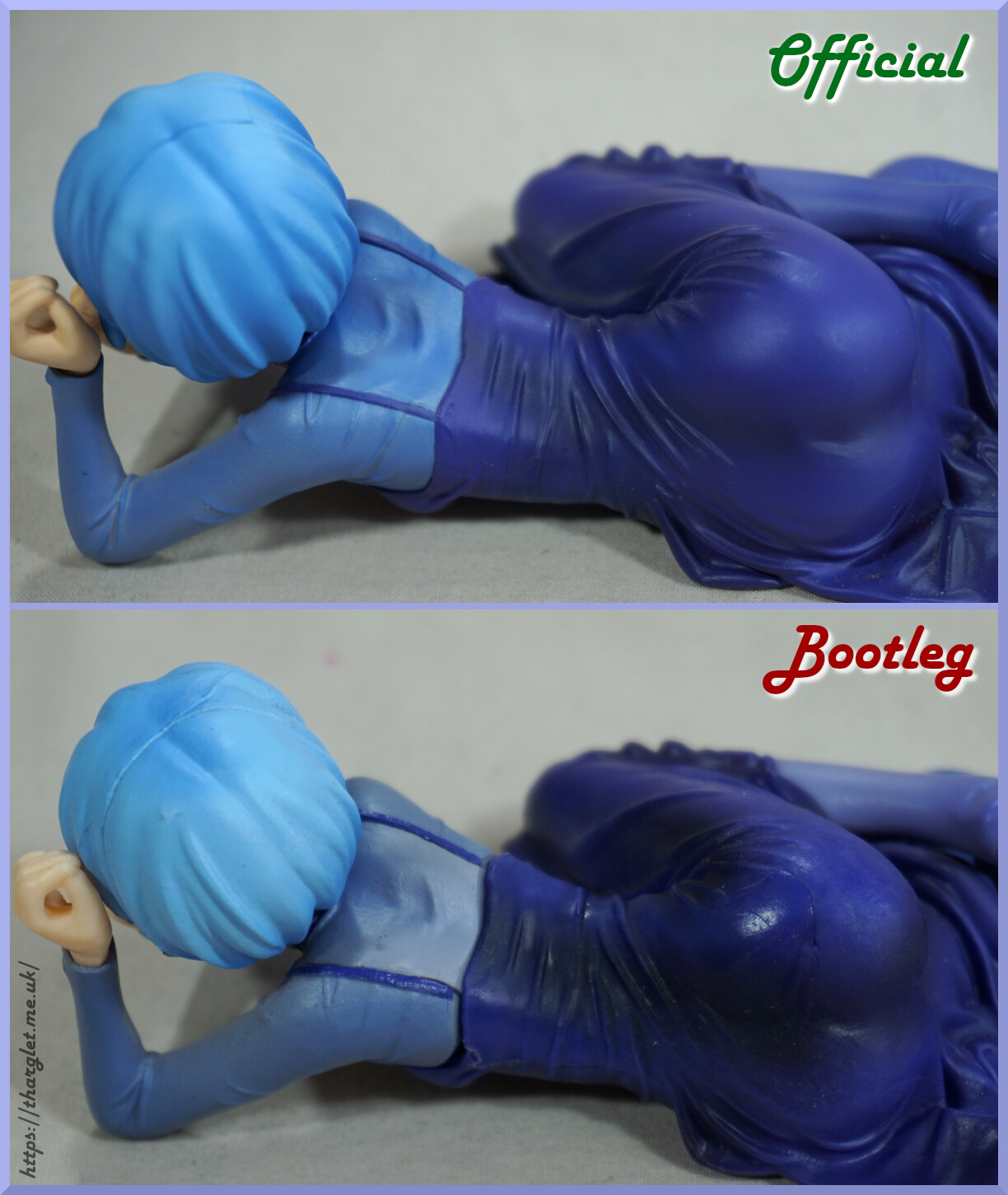 Man, the bootleg really doesn’t hold up from this angle.
First of all, we have the terrible shirt-dress seam – figure can never be good if the parts don’t fit together. The shirt is lacking shading and is just generally an “off” colour.
Moving to the dress itself, the shading has been done far too sharply on the bootleg and too widely. We’ve also got a very unevenly applied finish so she’s sort of matte in some places, but has a very shiny spot on her bum which looks really weird when the light falls on her.
The one thing that held up was the crease sculpting – if the paint wasn’t so poorly applied, the creases in her outfit would look good.

Gap on her dress from the other side:

The separate parts are more of a match here on the bootleg, but we’re definitely gapping. For the seam that runs down her dress it looks like the official has “dressed” this up to make it look like a fabric seam, but the bootleggers have missed out on that trick and left an unfinished plastic seam instead. We can also get a good look at the seriously uneven finish on the bootleg from this angle too.

The paint on both legs of her tights matches on the official but on the bootleg they’ve become weirdly different blues. The casting has gone decidedly rough around the edges of the bootleg’s skirt. And yet another area where we can appreciate the even finish on the official.

Yeah, those blues on the bootleg don’t look good. Here we can see the janky assembly of the bootleg means her feet float above the floor, especially her right leg that should be lying on the ground.
The bootleg foot also features some missing finish.

An attempt was made with the bootleg – the overall design is reminiscent of the official’s but doesn’t follow the moulding and wonks off to her left side.

Bottom of the dress: 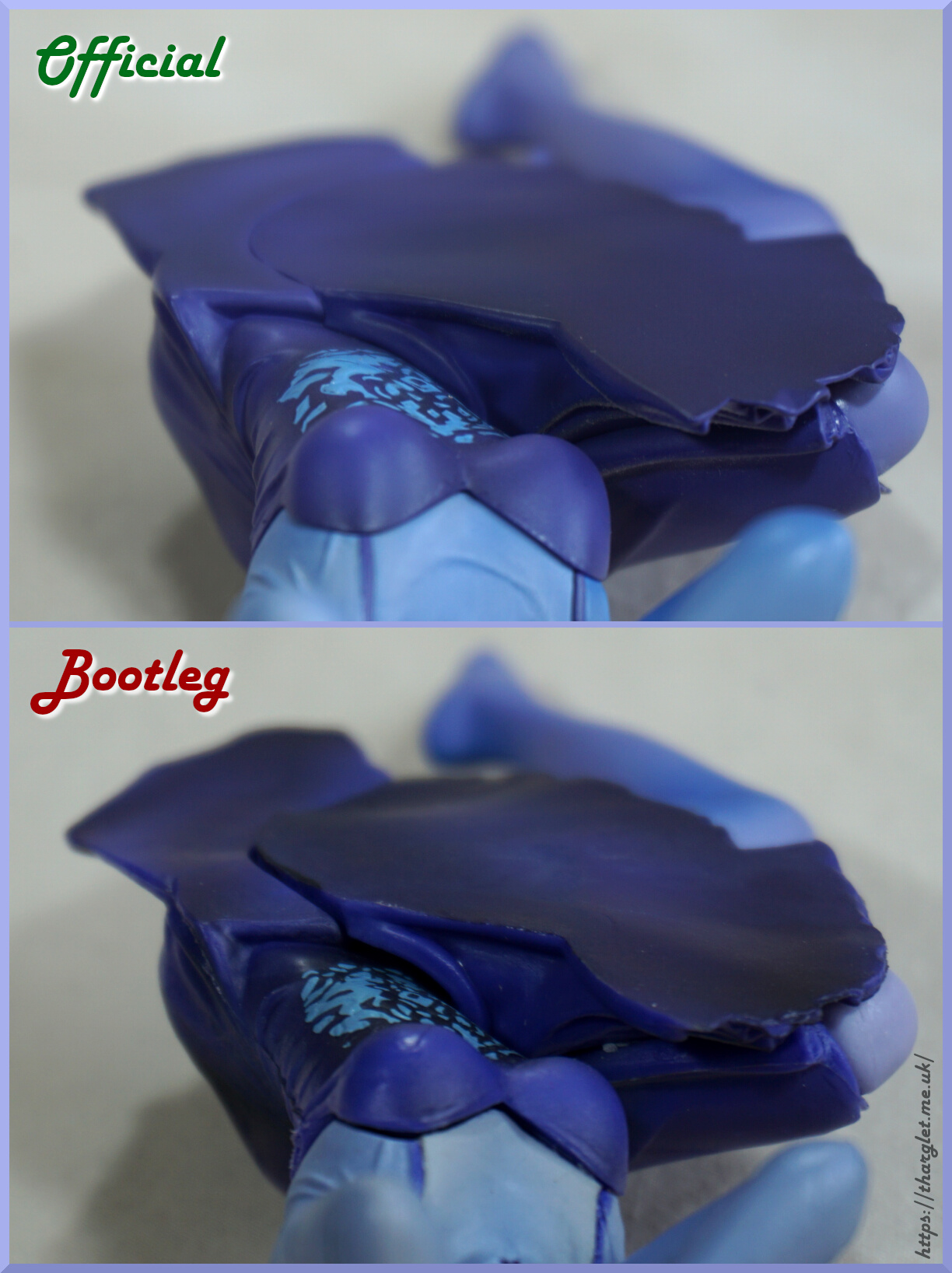 This part of the figure should be flat so she lays evenly on the base. The official has achieved this, but the bootleg is horribly warped like a wet piece of wood.

The parts don’t even match up correctly on the bootleg:

This doesn’t really show when she’s on display, but does demonstrate the quality of manufacturing for this bootleg.

The box for this bootleg could definitely confuse a novice collector – the box itself is of a nice quality, though they have edited out the Kotobukiya logos. The printing inside the bootleg’s box gives it a more premium feel than some of the bootleg boxes I’ve seen.
The figure itself isn’t the worst bootleg I’ve featured but definitely falls down in the details. I think a “bootleg collector” would be happy with this figure, but with the gaps and odd paint I don’t think someone who collects official figures only would be happy with this. And probably not fooled with its poor quality.
In terms of reusing the base, I wouldn’t bother. It’s so low-quality you might as well not use a base for the official figure if you don’t have the original base. Or make a mini-rug out of some carpet or fluffy material.

In terms of telling it apart from the official, the box has a few giveaways – the missing logos and warnings, incorrect barcode and non separate cardboard inner. For the blister, it doesn’t have the “opening” design of the official.
For the figure itself, the poor finish, blobby earrings and poor assembly are major clues to its lack of authenticity.