Today’s blog will feature the drink-hugging Momo by FuRyu. This is one of a set of FuRyu knockoffs I bought – the other ones in this set will be noodle stoppers. As she’s pretty skimpily dressed and there’s some closeups of her bikini bottoms I’ve marked this blog NSFW.
As these FuRyu blogs will be shorter due to the size and complexity of these figures and me no longer owning the boxes for a box comparison, these blogs will be released at a quicker rate.

I chose this particular figure as it’s a favourite of mine of these small figures, and is a little different from the other noodle stoppers.

The original I preordered on AmiAmi.

This bootleg simply came in a clear bag, but an immediate issue presented itself: 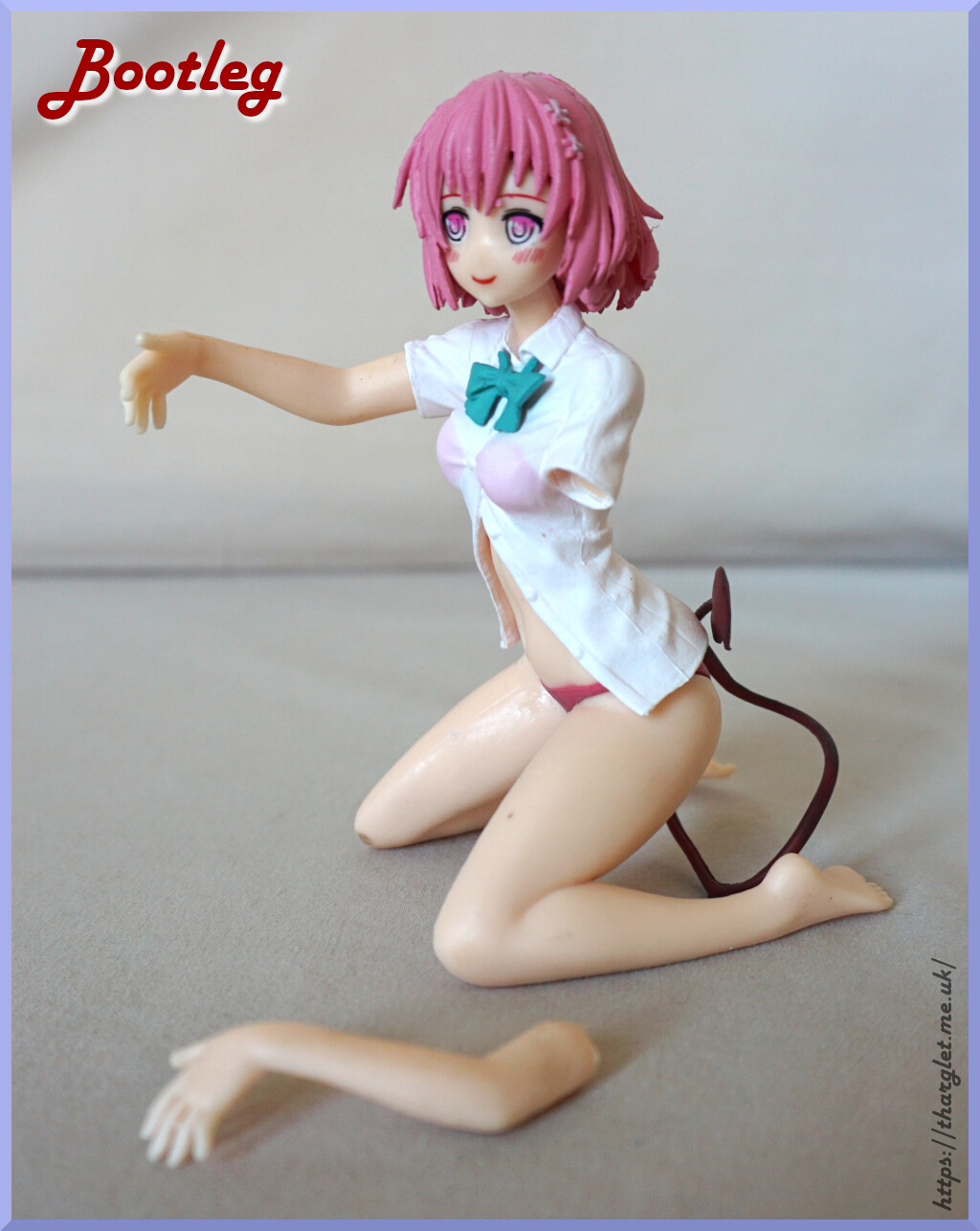 Ah, hrm… not going to be hugging many bottles like this!
Unfortunately it was not a case of plugging the arm back in: Here we can see where the arm peg has simply snapped in half. Before I commenced this review, I glued the arm back together with some cheap superglue. The bond wasn’t great, but sufficient enough to allow me to photograph it. 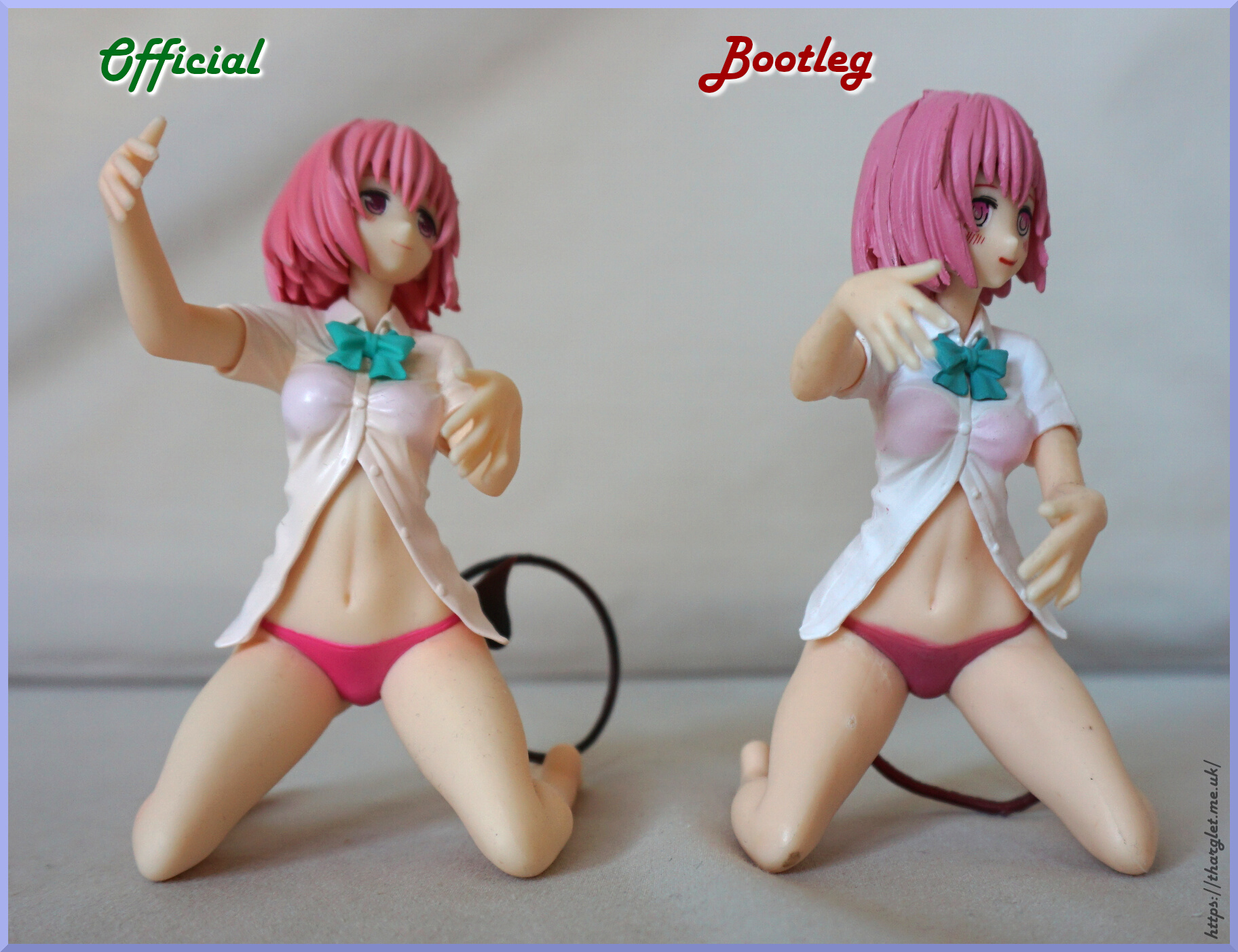 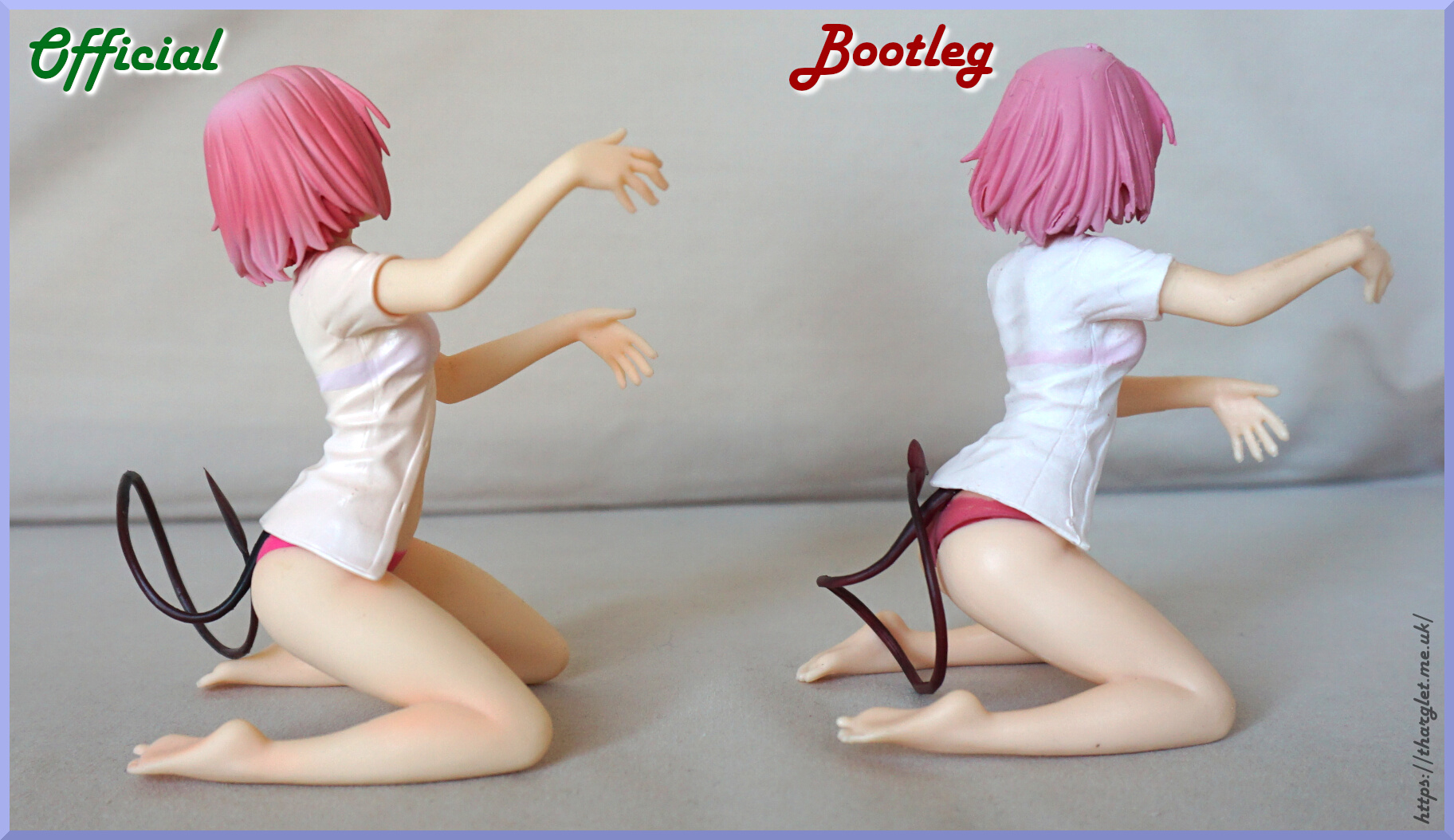 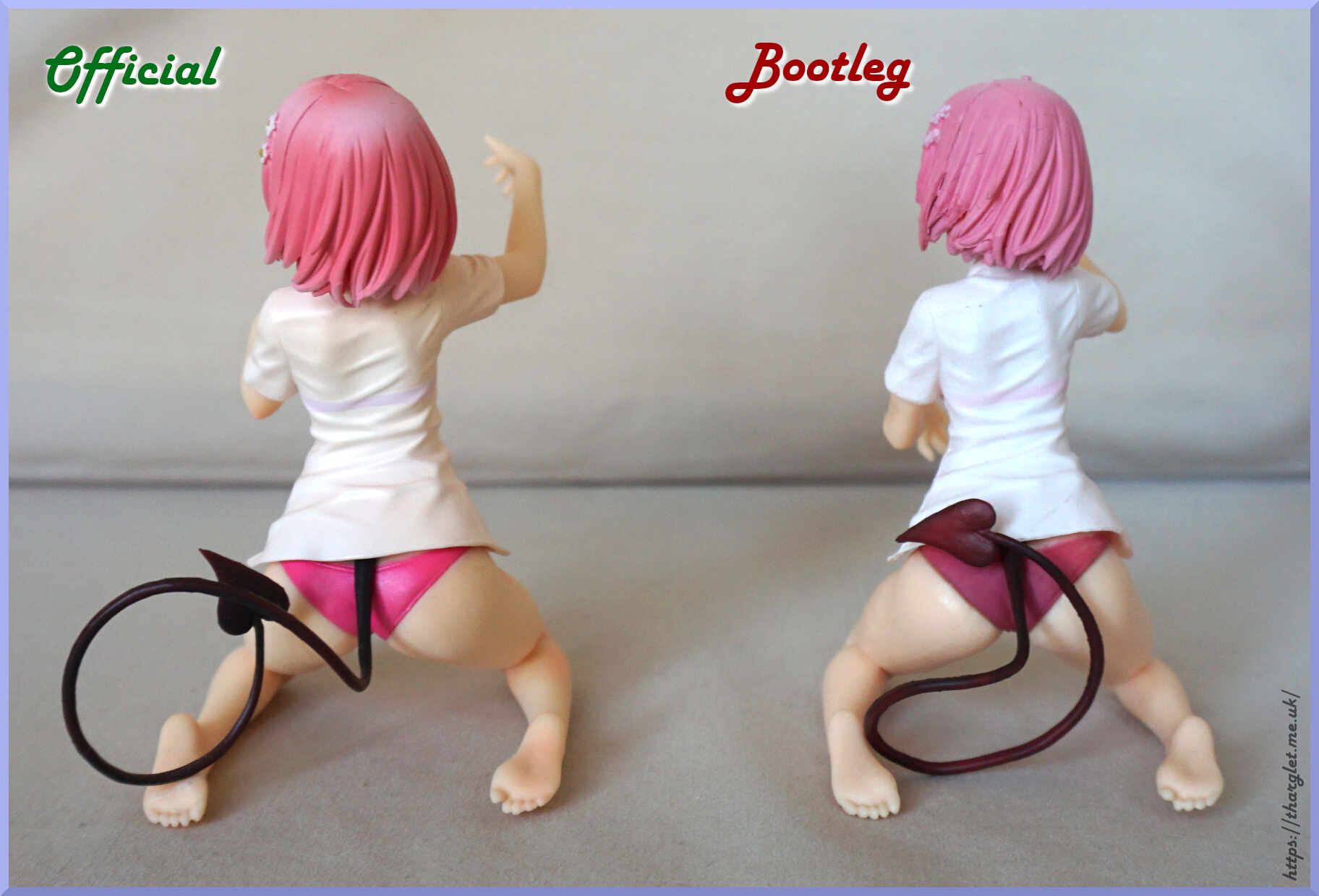 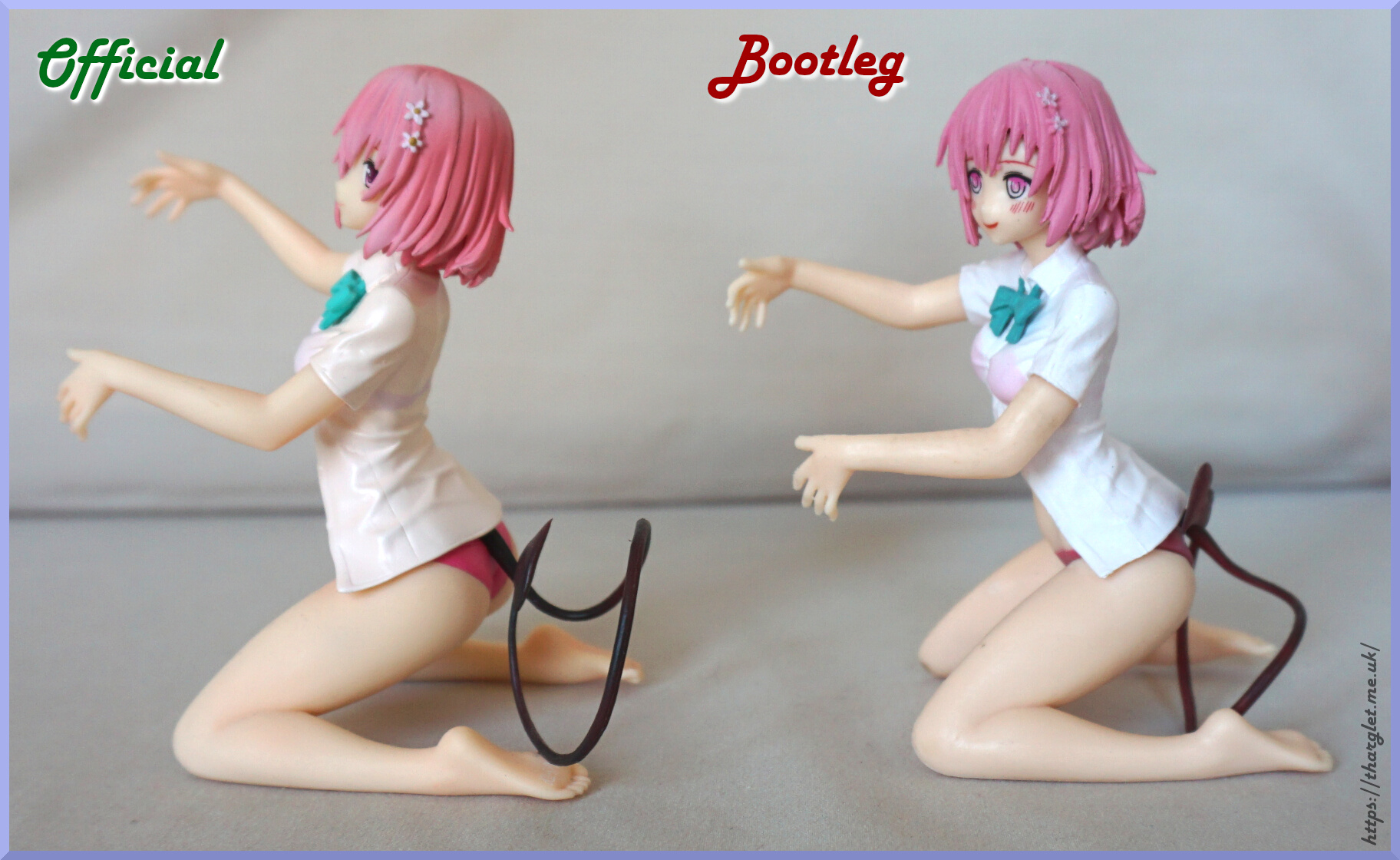 A fairly similar effort, but we can see that the hair is a mess, the panties are a different colour and her bra doesn’t show through her clothes in the same way. 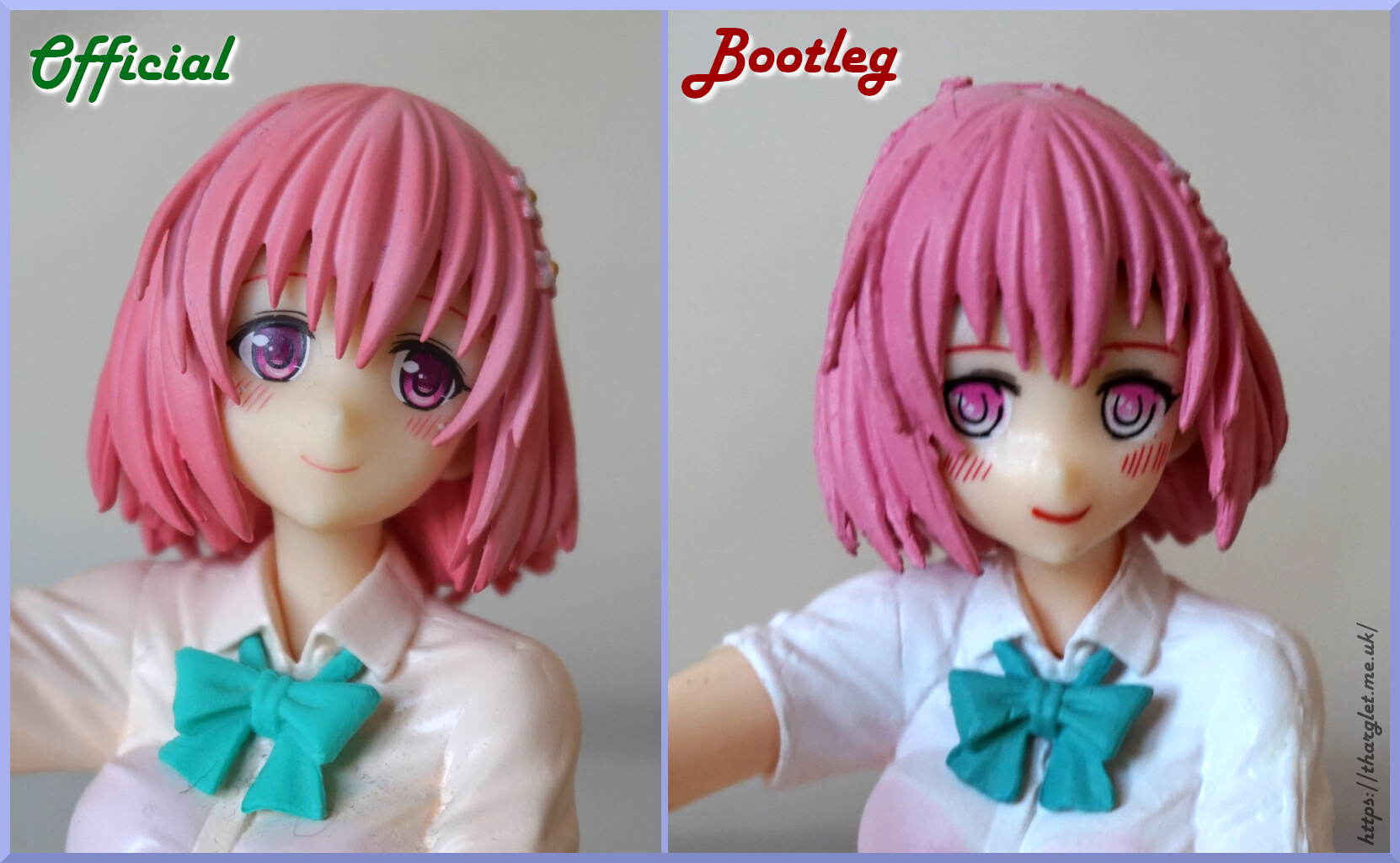 For the official, we have a cute, smiling expression and the bootleg… has a face only a mother can love. The eyebrows, embarrassed cheeks and mouth have been done in pale colours on the official and fit in with the rest of her face whilst the bootleg has lines done in a much stronger red and thicker than their official counterparts. It’s almost as if the bootleg has fresh wounds rather than facial details.
Moving to the eyes, the bootleg has lost significant amounts of detail – we’re missing two shades of purple and the white shines are underneath the black iris markings leaving her eyes looking odd to me.
The official’s hair is a pleasing peachy-pink and contains some shading. Bootleg’s hair is blobby and poorly moulded as you’d expect of a bootleg and painted more of a “pure” pink.
Moving down to the bow, the official’s looks nice, even if it is’t super-detailed, whilst the bootleg’s has a dent in it.

A closer look at the bootleg’s hair: The hair on the bootleg is actually partly loose – it will wiggle around, but it didn’t actually come off (and that’s with me trying to some extent). If it gets pushed up, it looks really ugly. Official has no such problems and remains in place.

The official’s hair flowers are painted well for a prize figure, and we have some paint shading in her hair, which is also a treat for a prize.
Now the bootleg, oh dear. The flowers are barely painted, making it hard to tell what they’re supposed to be. We’ve got plenty of excess plastic, including some wisps of the stuff at the lower back. The hair seam is also very messy, completing the bootleg look.

Both are actually shaded here, so points for both.

The seam in the hair on the official has been blended to some extent, decently well for a prize. Bootleg doesn’t have such attempts made, and we have spiderweb of lines making the top of her head look odd. The official’s shirt is a peach/off-white colour, and we can subtlety see she has a pink bikini top underneath. The bootleg’s top has been painted with a rough, stark white paint and her bikini top is a lot more visible than the official’s. Guess she got the cheap shirt from Primark.
The finish on the official’s shirt is much nicer in my opinion – the shiny finish gives it a silky feel, whilst the bootleg’s just look like she’s been dipped in paint.
The stomach definition is fairly similar on both, but the bootlegs is slightly less defined.

The official has a hot pink bikini, but the bootleg’s is more of a berry colour. The painting is also not very good on the bootleg, and there is a noticeable amount of paint on her abdomen.
Looking at the bootleg’s legs, something has gone quite wrong with the plastic casting, and it looks like she has sores on her upper right leg. I find it slightly unpleasant to look at. Along with the skin aberrations, she has a dirty knee and dirt spots on her left leg. My official does have some dust on it, but that’s British dust rather than factory dirt. On the official, we have a subtle seam line for the shirt that’s been sculpted, but on the bootleg it is much more noticeable. The slapped-on paint on the bootleg shirt is in full view here too. The bikini strap on the official has a bit of a sculpt to it, whilst the bootleg doesn’t. With the bootleg it feels a bit “painted on”, but does look OK in the photo in my opinion. The sculpts have come out pretty much a match, but you can see the rough paint at the bottom of the bootleg’s shirt. The bootleg has also come with some free dirt on her left shoulder.

The tail on the official is a much more pleasing shape, and happily springs into the position shown. The shading on the official tail is a fair bit more subtle. Both tails have excess plastic on them, which would’ve been nice to not be there. The main issue with the bootleg tail is the position it naturally resides in – it curls up against her body and just looks messy. It is also a less solid plastic giving it a cheap feel.
Looking at her bikini bottoms, the bootleg is horribly painted with a massive chunk of overage. Her leg is also not attached well to her body leaving a large gap. Here we can see the playful nature of the official tail and the “feh” of the bootleg.
Moving onto the feet that this shot was taken for, they’re actually pretty similar. The official’s left foot has a copyright stamp on it that the bootleg doesn’t. Official does actually have a bit of shading, but the bootleg doesn’t look noticeably worse for not having that. The toes weren’t perfectly replicated on the bootleg, but definitely a lot better than other bootlegs I’ve seen. Here we can see the difference in finish on the skin between the two – the official is matte whilst the bootleg very much has “cheap figure shine”. Again, the official has some shading in the skin that the bootleg doesn’t (located at the back of her knees). The bootleg also features a noticeable seam on her outer right leg.
In terms of the sculpt, the bootleg fares well, and is pretty close to the official. The toes do look a little longer on the bootleg, but I think that’s mostly a result of the finish. 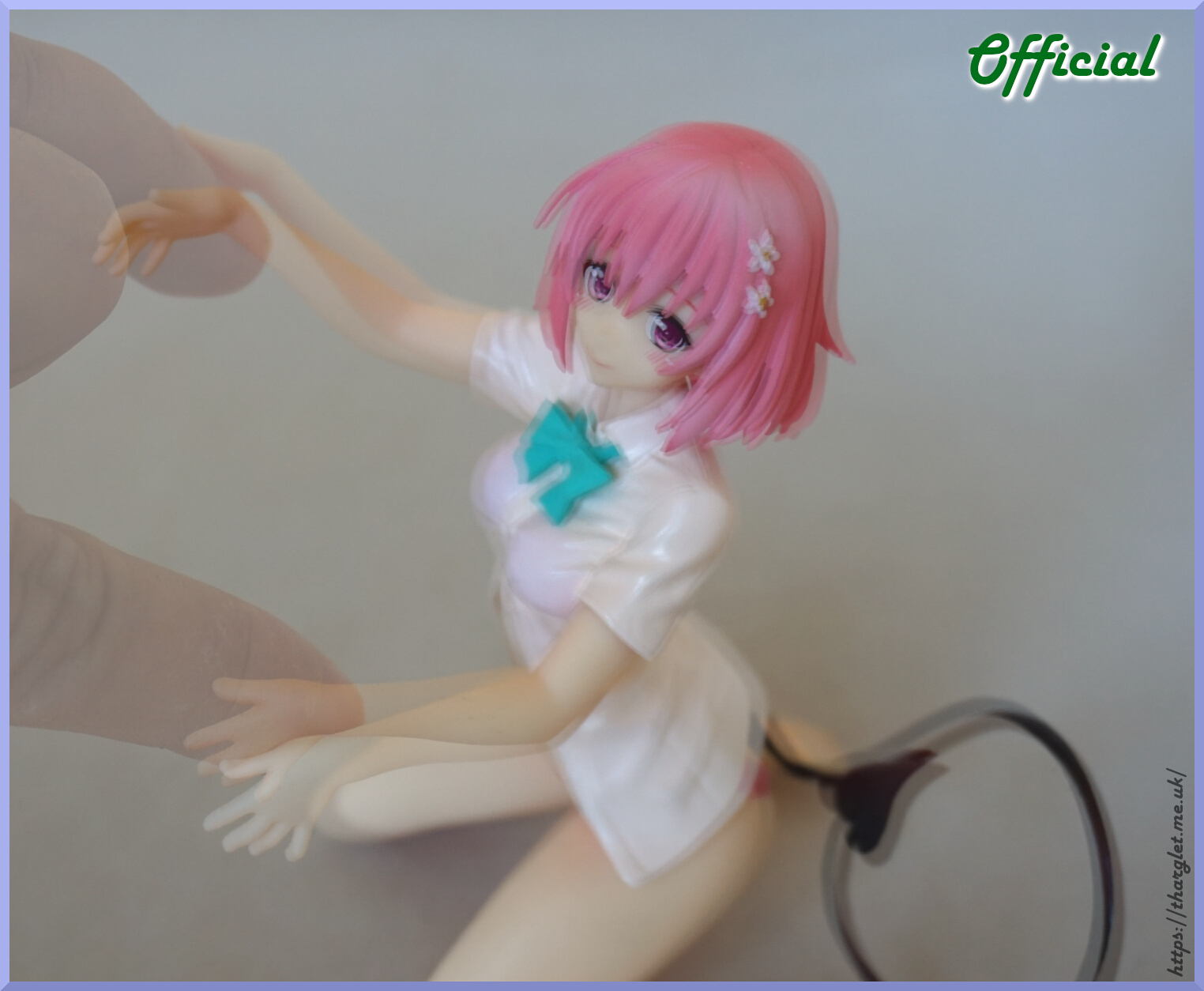 The official has rubbery arms so that they can be bent as shown above to squeeze a bottle into her grip. The bootleg has solid plastic arms which sort of defeats the “use” of this product, and mine would just snap anyway seeing as she came broken. So definitely a win for the official product here.

The official is definitely better than the bootleg, though the bootleg does look OK for £3.
Telling these apart is quite easy – if the face doesn’t immediately scare you away, the colour of her clothing and the shiny finish are also clues to the figure being bootleg.
The main disappointing feature of the bootleg is the fact she can’t hug a bottle – the plastic arms won’t allow her to hug as many items and the plastic would likely snap if you tried to give her a bottle. In terms of looks, the face is definitely not good, but it was the tail that really stood out to me as being poor quality – whilst it might be possible to improve the pose of the bootleg’s tail, it will likely deform again over time.
Going to be sticking with my official figure for this one.